I'm a one-card kind of guy. When I get a duplicate card, it goes to the trade stack with few exceptions. When I decided to try to complete 1973 Topps, I had no problem plucking the 73 Reggie card out of my Reggie collection, the Gossage RC out of my Gossage collection, etc. I still feel like I've got these cards in my collection, they're just currently stored in a different place. If I happened to come across another 73 Reggie, I'd give it a home with my other Reggies, but I don't feel like I need another one.

But a recent post at All the way to the backstop about getting several copies of a particular card got me thinking. I was particularly struck by Marcus noting that "looking at pages and pages of the same card might be soothing, in a hypnotizing mind numbing way."

Yes! That sounds wonderful. Sign me up for some of that. I'm not even a binder guy, but became bent on filling my eyes with double vision.

The questions then was, which card should I pick to obsessively accumulate? It's gotta be cheap, it's gotta be attractive, and it's gotta mean something to me. 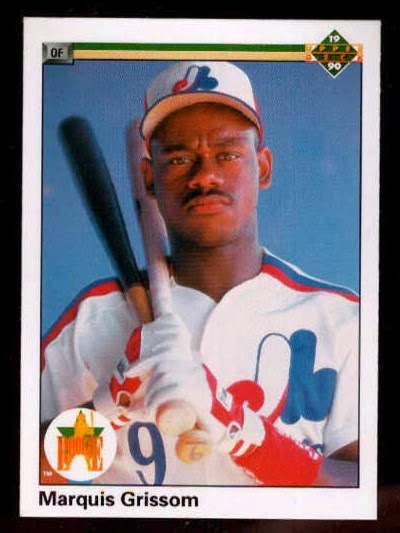 This was my absolute favorite card for a while when I was a kid. I would sometimes bring it to bed and admire it in the moonlight before placing it near my clock and falling asleep. I may have even slept with it under my pillow once or twice. There was just something so soothing and comforting about the card that I loved. Like a favorite stuffed animal or something.

It's just a perfect portrait of a confident young ballplayer, full of promise, standing alone on a field at night. Featuring vibrant colors and soft focus, it feels like something magical out of a dream.

Grissom certainly had a respectable career. While he won't be remembered as an All-Time Great, he put together many fine seasons.. 4 Gold Glove Awards.. 2 All-Star selections.

And where he really stood out was in October. He hit a shining .360 in the '95 World Series as his Braves brought home their lone Championship. The next year he followed that up with a .444 average (!!) in a losing cause against the Yankees. And then in '97, made a 3rd consecutive trip to the Fall Classic, batting .360 as his Indians fell to the Marlins. Numbers to be proud of, indeed.

He's also a good person who spent nearly all his baseball earnings on the Marquis Grissom Baseball Association, a non-profit organization whose aim is to teach baseball to underprivileged kids so they can qualify for university scholarships. Plus, he bought houses for his mom and each of his fourteen siblings. Seems like a solid dude, both on and off the field.

So yeah, not a "nobody", but his cards aren't really sought after these days. And while his Upper Deck rookie card isn't exactly a common, as a base card from the overproduction era, it can be had cheaply and easily.

Deep in a part of my mind, he'll always be that rookie on the cool-looking nighttime Upper Deck card. But of course, much time has gone by. Marquis retired years ago. The Expos don't exist anymore. And Upper Deck no longer makes baseball cards.

I don't bring the card with me to bed these days, but it still fills me with warm fuzzies when I see it. So I'm excited about my quest to amass a pile of them.

I kicked off my hoarding by finding a lot on eBay for 35 copies of the card that set me back less than 22 cents each when all was said and done. Not bad! 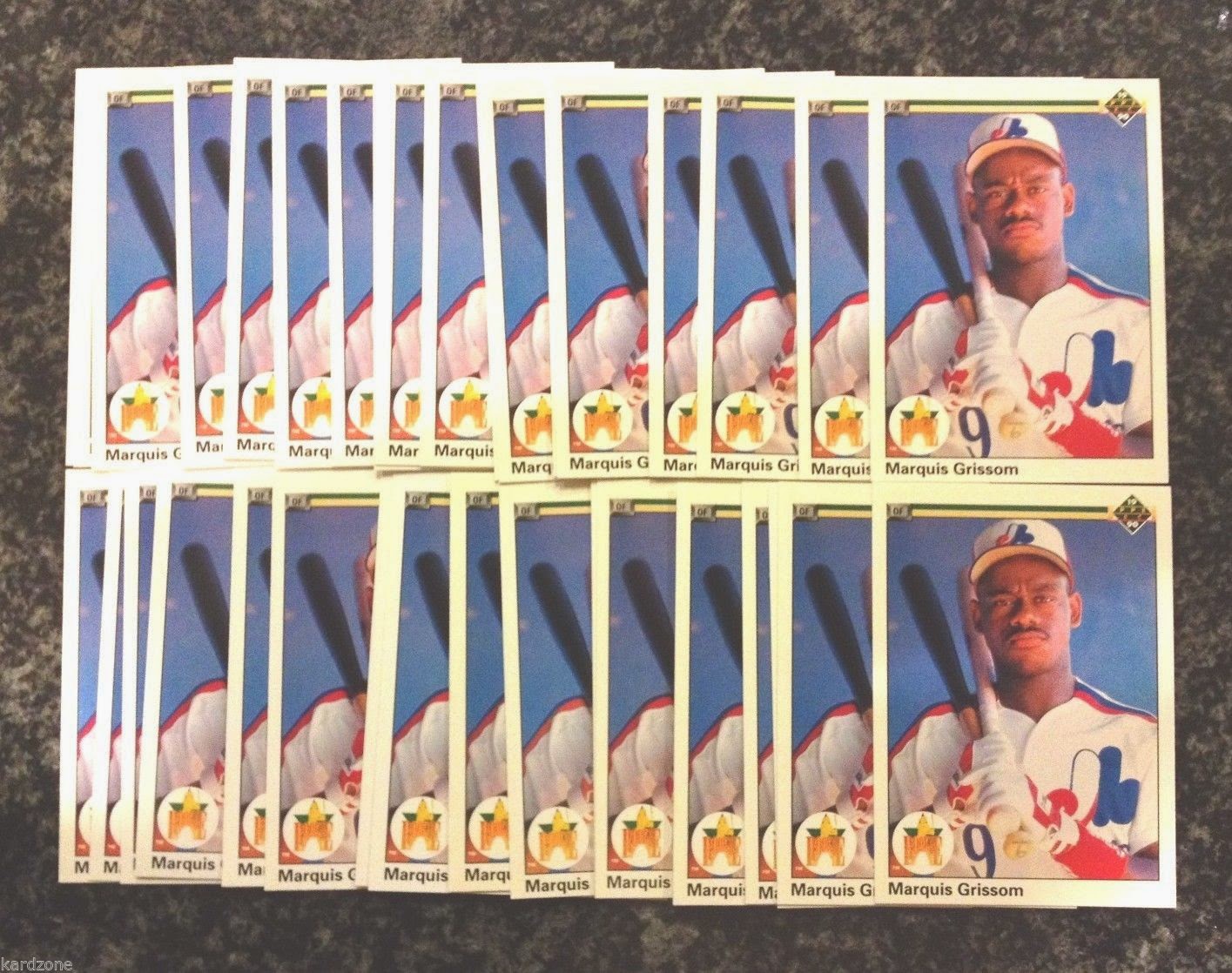 So let me officially announce my intention of becoming a dumping ground for Marquis Grissom UD rookies. Because of postage rates, I won't necessarily jump at every trade offer for one. But definitely would be a nice addition to any trade package. And I might keep an eye on eBay for more cheap lots (less than a quarter per card, shipped).

Let's call this mini-collection Marquis Mania. I'm not really after other Grissom cards, but if I get them, I'll likely keep 'em anyways.

My dream is to have a full-sized binder filled with nothing but page after page of 1990 Upper Deck #9. I would look at it before bed, and like a toddler with a picturebook, blissfully drift off to sleep with a smile. ....zzzzz..zzz..zz
Posted by defgav at 6:16 PM