Celebrity crushes, we've all got them.

With my marriage on the horizon (Hawaii in June), I've been racking my brain to finalize my "list of adultery exceptions" to include in the pre-nup. You know, a short list of celebrities that your significant other agrees to give you a thumbs-up to pursuing a one-time fling with, in the infinitesimal chance that someday you run into one of them and hit it off.

What? Isn't that a real thing?

I'm lucky that my girl is cool enough to humor me and go along with silly things like this (and yes, she can write up a list of hollywood hunks or rock stars that I have to give her a pass for, as well). I'm extremely happy to have found her. I love her a bunch and don't doubt for a second that we're in it for the long haul. I'd obviously never dream of messing around on her under normal circumstances.

So this is really just for fun. Yeah, it's pointless and in questionable taste (I hope my to-be mother-in-law never reads my blog!), but something entertaining to daydream about. --Hey, the world is a crazy place! Stranger things have happened than a random guy hooking up with a beautiful star, that's for sure.

Ground rules
It's gotta be a famous person, so nothing like "Tiffany from next door" or "Becky from high school". It doesn't have to be an A-list star, though; Being a "famous person" is determined by having an established Wikipedia entry. The number of celebrities should be set at a low number such as 3 or 5 or even just 1, but a couple may agree on up to 10 slots if desired. Once the list is submitted, it cannot be edited (swapping someone out) unless mutually agreed upon by your significant other, limited to one request per year, in writing. The exceptions to this are if one of your choices passes away or reveals sexual orientation that would preclude them from interest in your gender, in which case you may instantly select a replacement.

While there are a lot of pretty ladies out there, one woman in particular commands the top spot of my celebrity affection and needs to be locked down on my air-tight, legally-binding list. 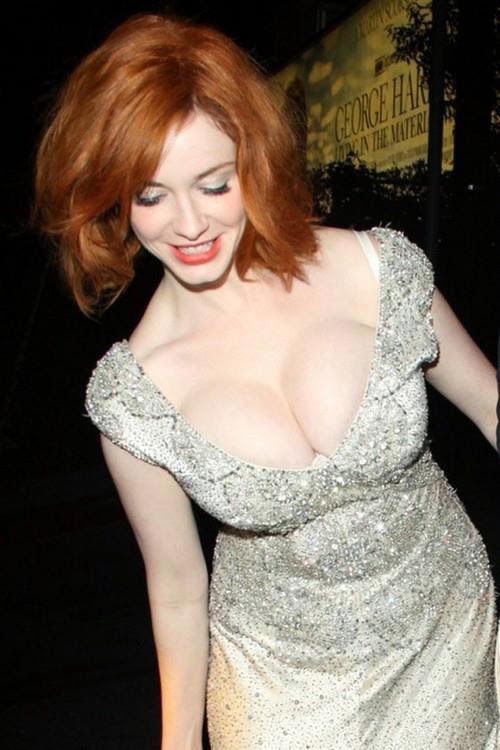 Can't lie, I'm drawn to shapely ladies-- a Breast Enthusiast, if you will-- and she's among the shapeliest.

I love her on Mad Men, but that's pretty much all I know her from. I've been meaning to check out her other acting work. It's a bummer the show is coming to and end soon, but hopefully she keeps busy working so I can keep on admiring her.

So what does all this have to do with cards?

Well, a while back on the blog, I was talking about how Mad Men should have trading cards, and I salivated over the thought of owning a certified on-card auto from the lovely Mrs. Hendricks. Moments after posting that, I did a quick eBay search and found out she does in fact have a "signature" card out there!

It's part of a Firefly set that came out pre-Mad Men. I watched the first 2 or 3 episodes of that show on Netflix a while back, but I'm not much of a sci-fi guy (Star Wars notwithstanding) so it didn't really grab me, and I never got to the episode or two where she guest-starred.

So anyways, I found a seller with the card. It was at a ridiculous Buy It Now price with Or Best Offer. I made him an offer that was much lower than the Buy It Now price, but still pretty ridiculous. The seller accepted my offer, and a few days later she was mine. 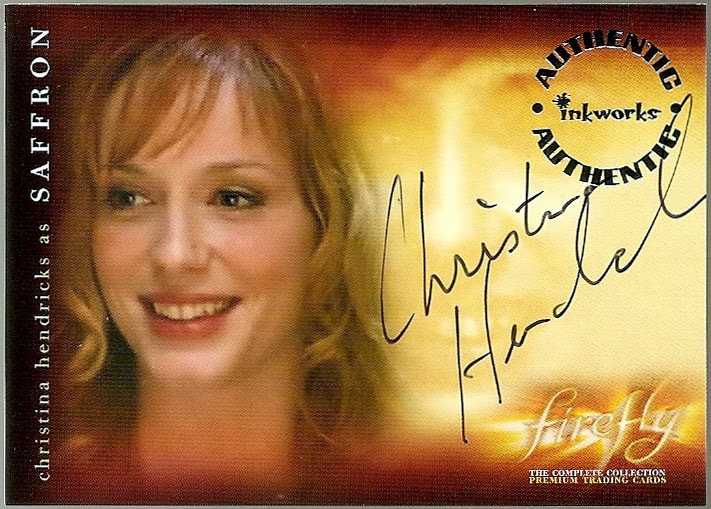 LOVE THIS CARD! It's an on-card auto, which is always much more desirable than a sticker or cut-signature. Features a nice, mostly-legible signature. Sure, it's not perfect.. bold blue sharpie would've been better than thin black ink. And yes, a photo showing some cleavage would be ideal. But the headshot is fine, too. 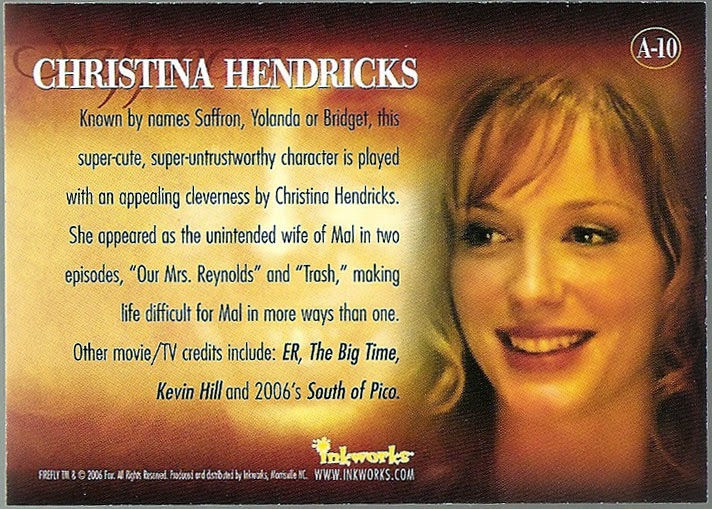 So yep, this is my best "Girlie Card" (what I call my little collection of females on cardboard), leaping over Olympians Carly Patterson and Nancy Kerrigan, and well as Playboy model Spencer Scott and Billie Jo.

I intend to stick a fork in girlie card collecting now, saving my energy and money for baseball cards.

Of course, there's still time for Mad Men to come out with a set of cards (The new season premieres April 13, 2014, then the show will eventually wrap up in mid 2015).. so if another, better Christina Hendricks certified auto card pops out up one of these days, it'd be hard to resist going after it.

And if I ever happen to bump into her, I could break the ice by telling her I've got her autograph. We'd probably have a good laugh about it and I'd ask her if she'd like to get a drink or something. One thing would lead to another and.. well, this is a family blog, so... 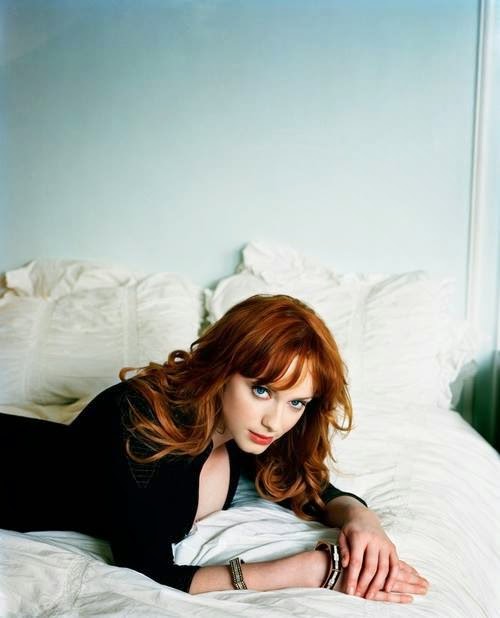 Nah, in reality, I'd just shyly smile at her and then quickly scoot away with my head down.

But for whatever it's worth, she'll be perched atop my "list of adultery exceptions" just in case.

Honorable mention on my celebrity crush list would need to go to Zooey Deschanel. She's pretty awesome too. I wonder if she has any certified autos out there? Hopefully not.. or I might have to find one.

Others likely to make my list? Um, Amy Adams seems cool. Hard to resist Kate Upton. Taylor Swift is a cutie. Tina Fey would be a lot of fun to spend time with. Oh, and Emma Watson, for sure!

Ok, that's the end. Hopefully this flagrant celebration of female physical beauty didn't offend anyone. It's not my intention to be sexist, objectifying, or whatnot. Just paying tribute to a lovely lady! I respect women immensely, I assure you.

If any of you readers would brave continuing the discussion down in the comments... Who's on your celebrity crush list? Do you have any sweet cards featuring pretty ladies you'd like to brag about? Let's hear it!
Posted by defgav at 4:20 PM