A big Gavin, just in time for Christmas

As you may know, I collect cards of guys named Gavin; My Greatest Gavins collection, as I call it. I landed a big dog recently, perhaps the best-known Gavin out there (at least to people over age 35 or so), Gavin MacLeod. I know him from Love Boat syndication, and some of you may also know him from the Mary Tyler Moore Show. My aunt claims I was named after him, though my mom's story is that she picked it out of a book of baby names, and she's not one to lie, so I don't consider myself named after Mr. MacLeod, though he may have provided subconscious inspiration of the choice. If nothing else, he really put the name on the map in the US.

Anyways, he was always prominently represented in my eBay searches for "autogavphs" (autographed Gavins), but never trading cards.. always just stuff like 8x10s and note cards, neither of which I have much interest in collecting.

But then this summer he was included in a Leaf "Pop Century" set with a bunch of autographed cards (3 or 4 different cards, plus various parallels). Unfortunately, they're all sticker autos. And the pictures Leaf selected are kinda ugly. So I was holding out pulling the trigger on one until I either found one super cheap.. or there was something else enticing about the card... something such as.. say.. being a Christmas Card! 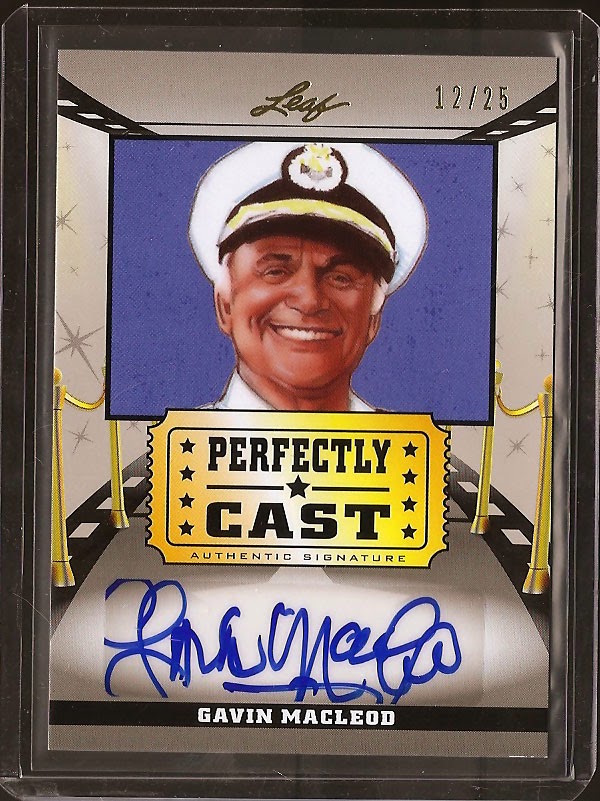 As you can see, Mr. MacLeod has a big signature and is not about to shrink it down to fit it onto a tiny sticker. In the dozens of his cards I've seen from this set, nary a one is actually confined to the borders of the sticker. Just another reason why on-card is better and why I was hesitant to bother picking up one of these cards. But as I say, that 12/25 serial number drew me in on this particular one, so I put in a bid and won it. I love hitting 2 quirky minicollections with one card. But then you have the question of which to group them with: the other Gavin cards or the other Christmas Cards?

I've got 3 Gavin Christmas Cards now, with this Gavin MacLeod joining 12/25 serial numbered cards of Gavin Floyd and Gavin Escobar, both showed off on the blog back in March.

Happy Holidays, and keep on Gavin'.
Posted by defgav at 3:57 PM