Card Show Recap! My biggest and smallest buys ever

Yesterday was a big day for me. First, brushed up my resumé and cover letter to apply for a promising new job (I'm still employed, but probably won't make it through October). Then I had to squeeze in a quick run to the card show and be home in time for midday shopping and lunch with the wife and mother-in-law. (BTW, the grocery store had no random old hobby boxes this time.) From there, my mother-in-law dropped my wife and I off at a big music festival, Project Pabst. As the name implies, it was put on by PBR, so there was a lot of cheap beer on hand.

This post will focus on the card show haul, but I'll try to weave in a little concert review as well.


First up at the fest was K-Flay, a lady rapper, and the act my wife was most excited for. I wasn't expecting to like her much, but she definitely won me over. Super cute, too.

While I was under the gun for time, I was efficient and it turned out to be my most prolific card show to date, picking up cards from 4 different dealers.

First thing through the door, a nickel box caught my eye. The guy obviously ripped a ton of recent stuff and these were mostly the base cards. For 5¢ each, I found a bunch of cards to take home. 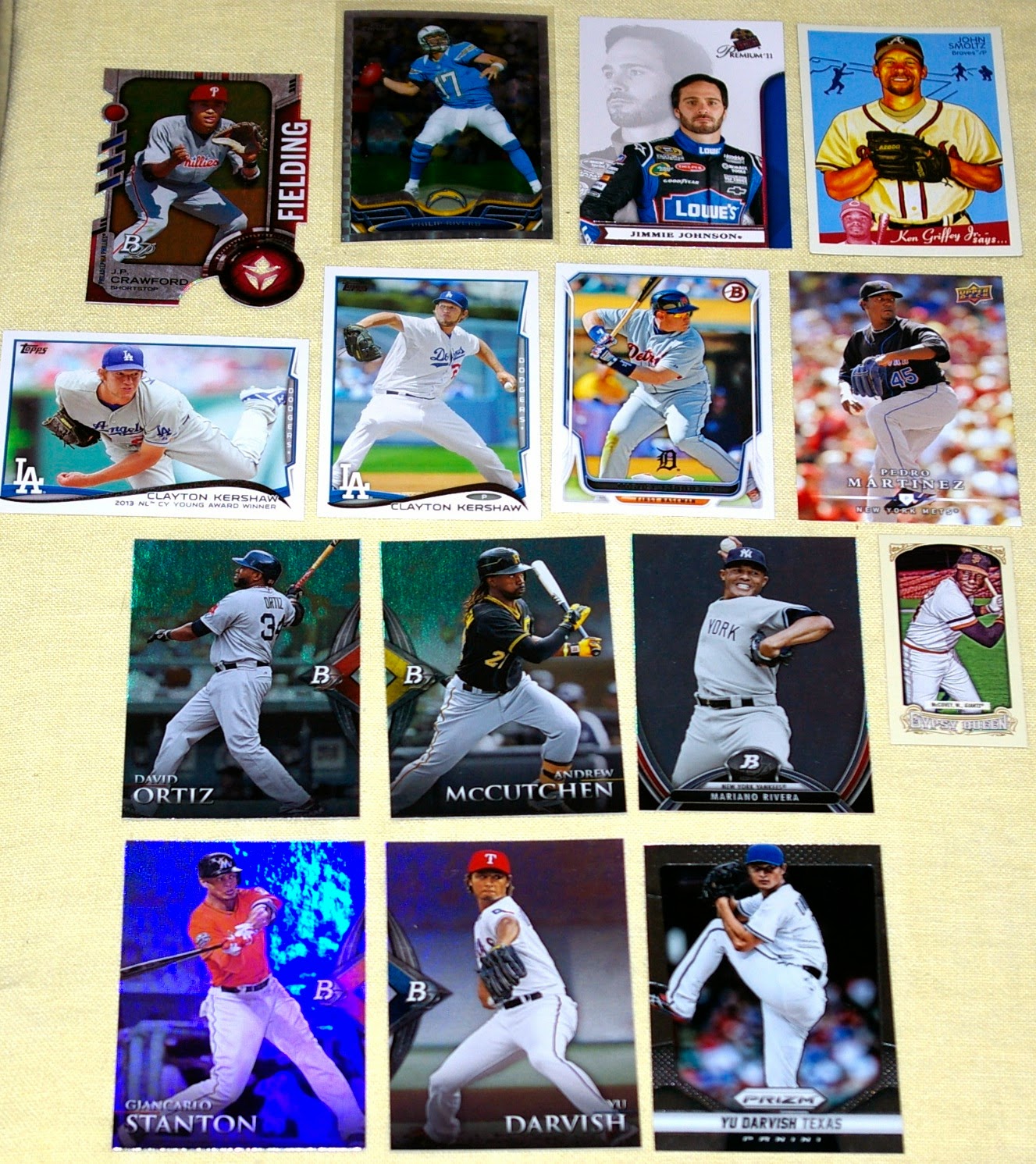 Let's see: J.P. Crawford (Phillies prospect I'm not familiar with, but thought it was a neat-looking diecut), Philip Rivers xfractor, Jimmie Johnson (my former classmate), Smoltz, a couple Kershaws, Miggy, Pedro, a McCovey mini, and some various Bowman base.

You math majors out there may have calculated all those nickel cards add up to 75¢. I didn't have change or want to break a one, so I poked around in his other boxes for a quarter card to fill out my dollar purchase (the smallest card show total for me to-date). 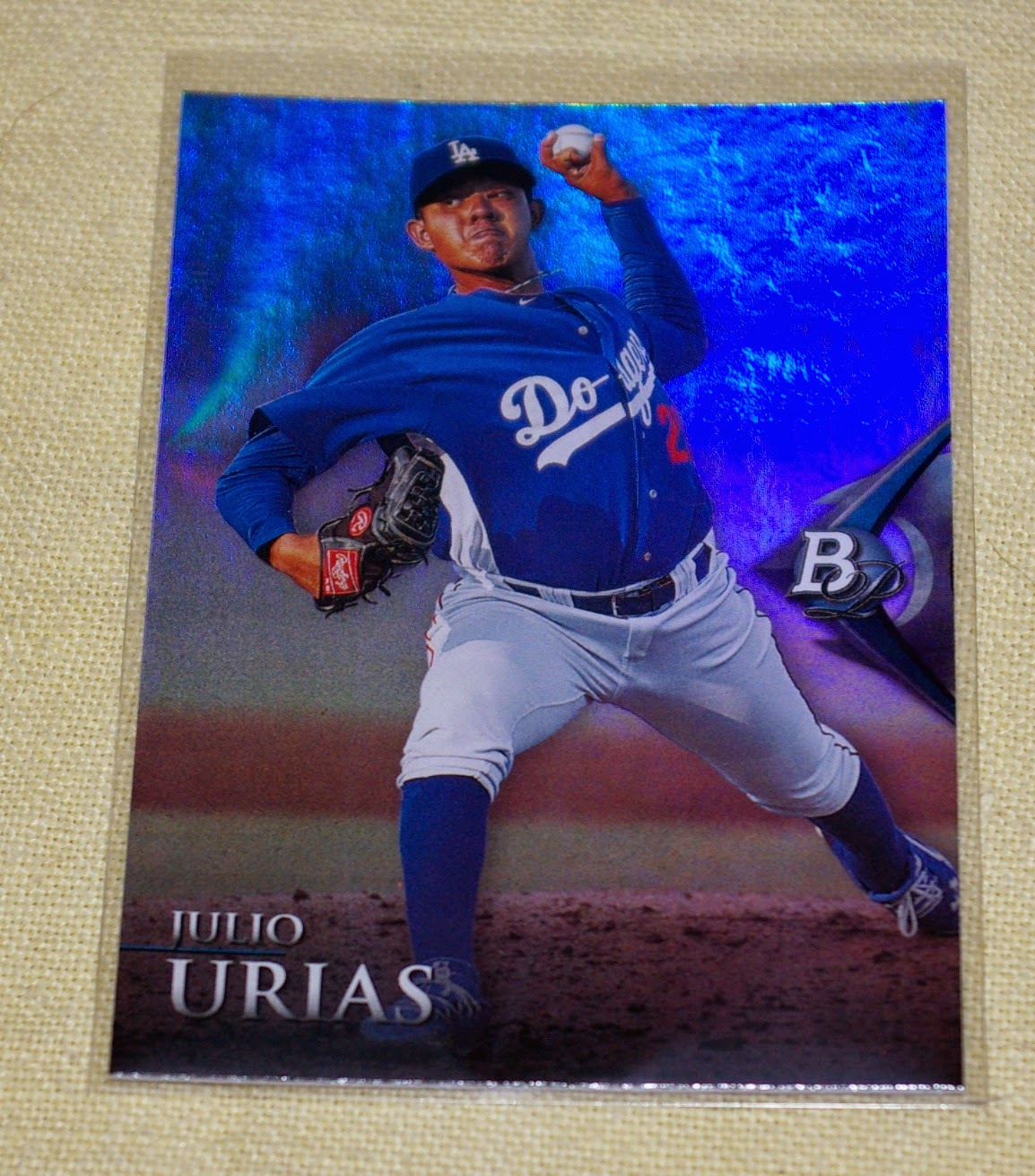 I ended up with lil' Julio Urias to be my missing piece. The dealer saw it and asked if I was a Dodgers fan. I scoffed and explained I picked out the card because I've heard of this kid being an upcoming phenom.. might as well grab a card of him.

The second act we caught was the Violent Femmes. The first real rock show I ever saw was the Violent Femmes way back on the very day the Chargers lost the Super Bowl. It was pretty cool to see them again nearly 20 years later. First they played their classic debut album in its entirety, then some other favorites, closing with my personal fav, "American Music".

Second purchase was a quick dig through another dealer's dollar box. I picked up a Lincoln's worth. 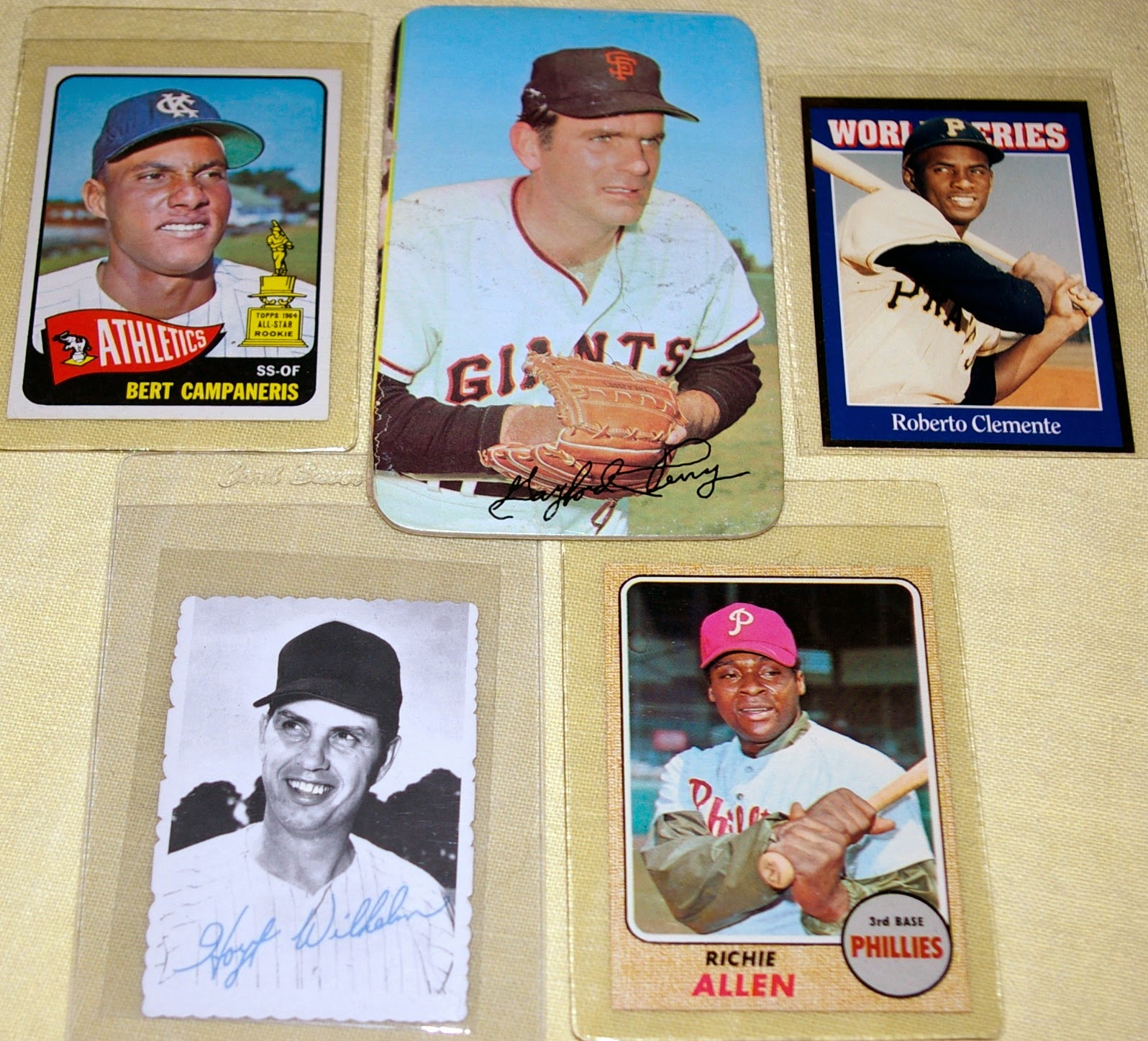 The first card that got my attention was the Super Gaylord, a nice hit for my PC. Couldn't pass up that Bert Campaneris RC in gem mint condition.. same with the pristine '68 Dick Allen, a definite upgrade for me. A Hoyt deckle and Clemente oddball round out the purchase.


Now I'm skipping ahead to the end, both of the concert and the card show, in an attempt to save the best for last. Tears For Fears closed out the show. Quick story, when I was a little tyke in the mid 80s, before I was even really "into music", I have a memory of rollerskating at somebody's birthday party at the late Aquarius Roll-A-Rena in La Mesa, CA. Most of the music they played there didn't register with me at all, but I distinctly remember hearing "Everybody Wants to Rule The World" and thinking to myself, "Wow, this is a great song!" So I've been a fan of the band for a long time, and this was my first time ever seeing them. That was pretty great.

Another dollar bin dig, this dealer I've bought from a couple times before. He's a quirky character and always seems to have a bunch of good cards. 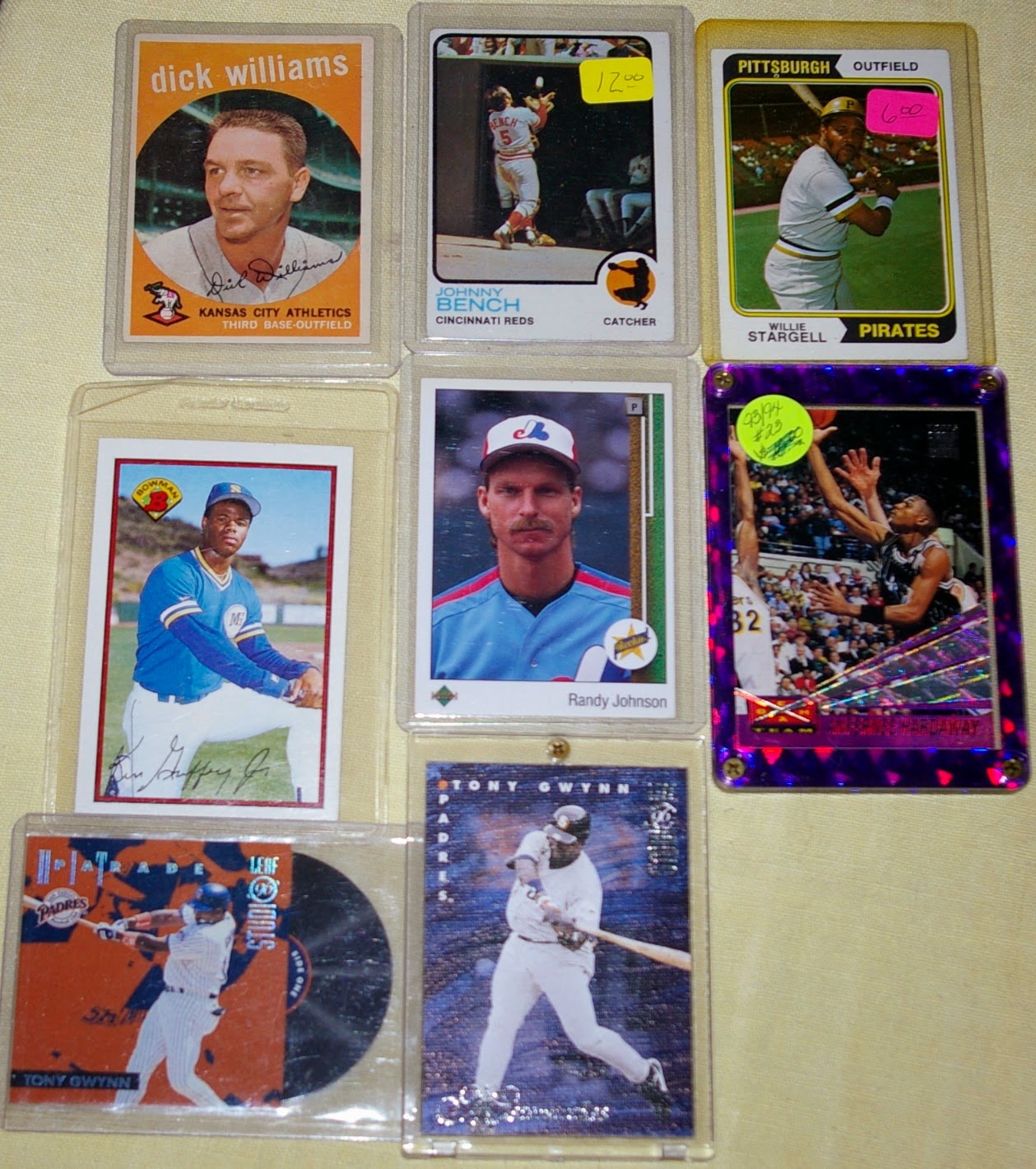 They were actually less than a buck each, I think 7 for $5. A few cards not pictured I bought really just for their cases. Like that basketball card on the right, there? Yeah, I mainly got it for its crazy refractory case. The best of this lot has got to be the vintage.. checking off a nice 59 Dick Williams I needed, and a Johnny Bench for my 73 setbuild, plus a sweet Stargell. And there's a couple 89 rookie cards that have evaded me throughout the years, with the Bowman Griffey and UD Randy Johnson. A couple Gwynn inserts round out the lot.


The band that inspired me to shell out for a ticket to this event was Rocket From The Crypt, one of my all-time favorites, and perhaps the most notable rock band to ever come out of my hometown of San Diego. I was there for their "final show" several years back. They recently reunited to rock out some nostalgia and make a few bucks. Good for them. They put on an excellent show, and even my wife who's not into them at all (much to my chagrin), had to admit their set was a lot of fun.

My big purchase of the morning, and in fact my largest card show pick up ever, came from a guy with a bunch of vintage (not my regular "vintage guy", though.. didn't see him this time.) For $60, I picked up some big-name needs for my 73 set plus a gem of a card. 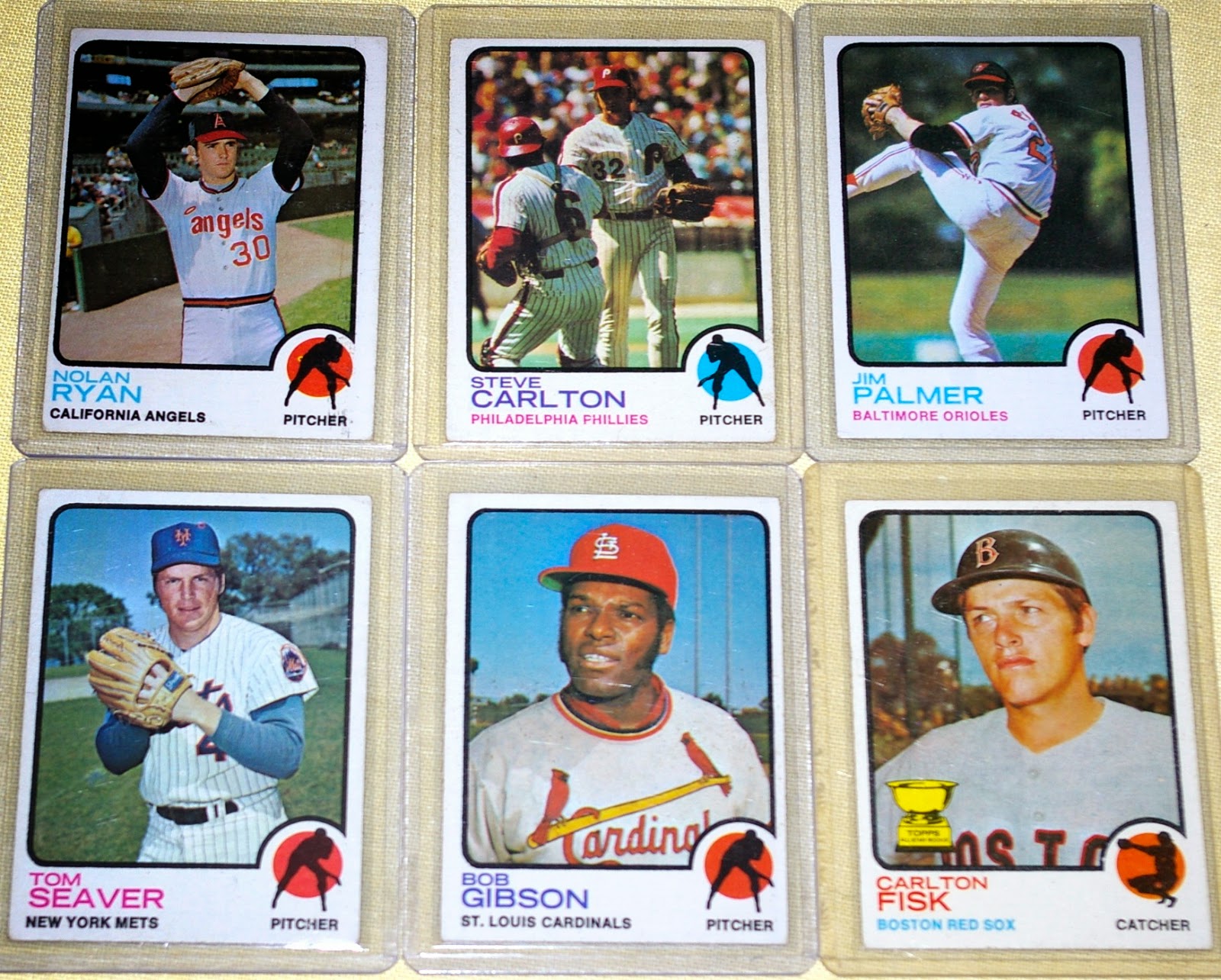 A half-dozen A-Listers to check off my needslist for 73 Topps. A who's-who of star pitchers from the time, plus Fisk's iconic 2nd-year card. The Steve Carlton is a bit creased, and some cards have corner issues, but overall in nice shape (The mark on Gibson's chin is from the top-loader/flash, not on the card.)

And now for the star of my card show haul: 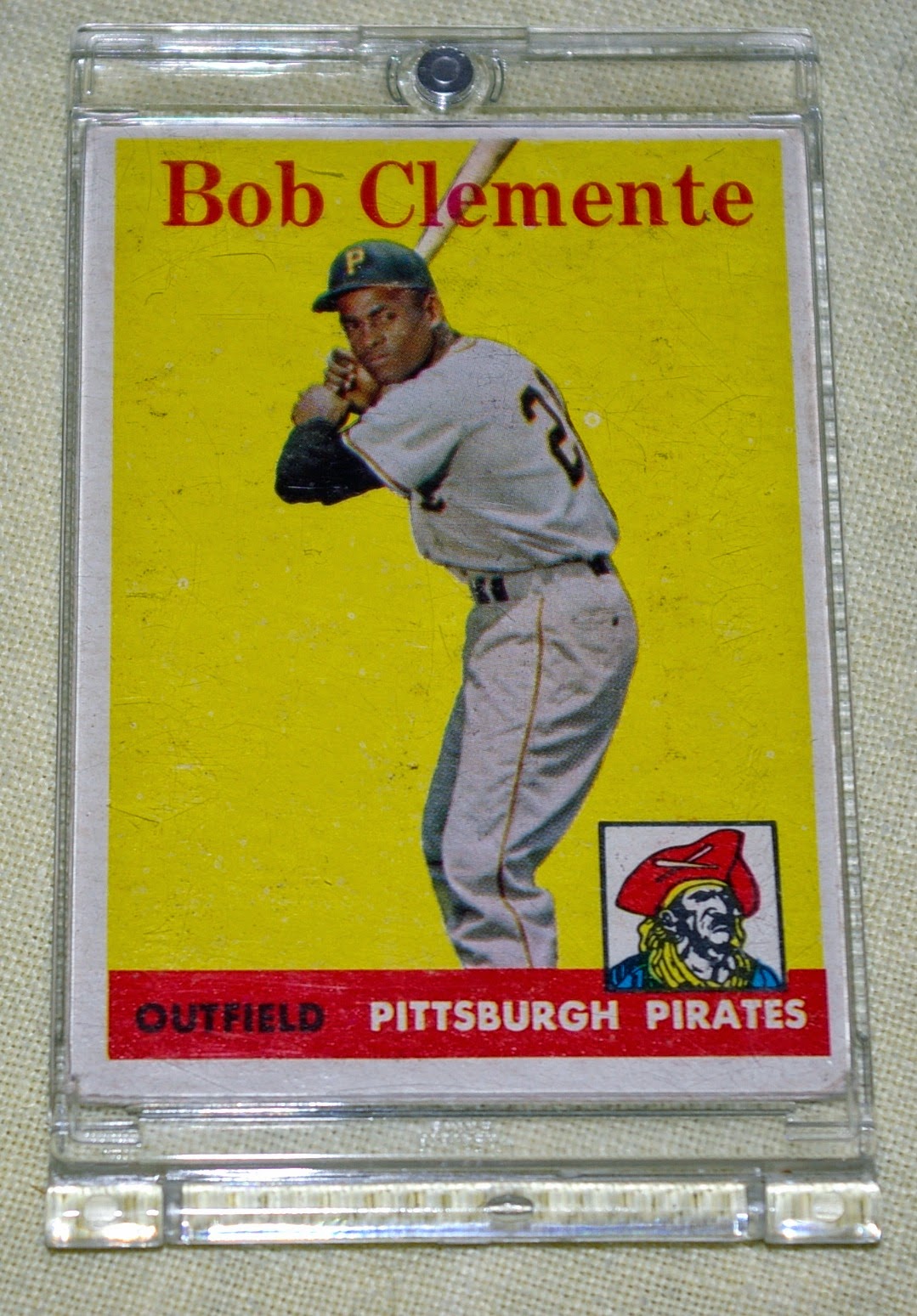 1958 Topps Roberto Clemente! Clemente-mber goes out with a bang! This gorgeous card is now my oldest Clemente, the only one I've got from the 50s. The corners aren't perfect, but it's actually in really nice shape.. perhaps even the best conditioned card out of all my vintage Clementes. 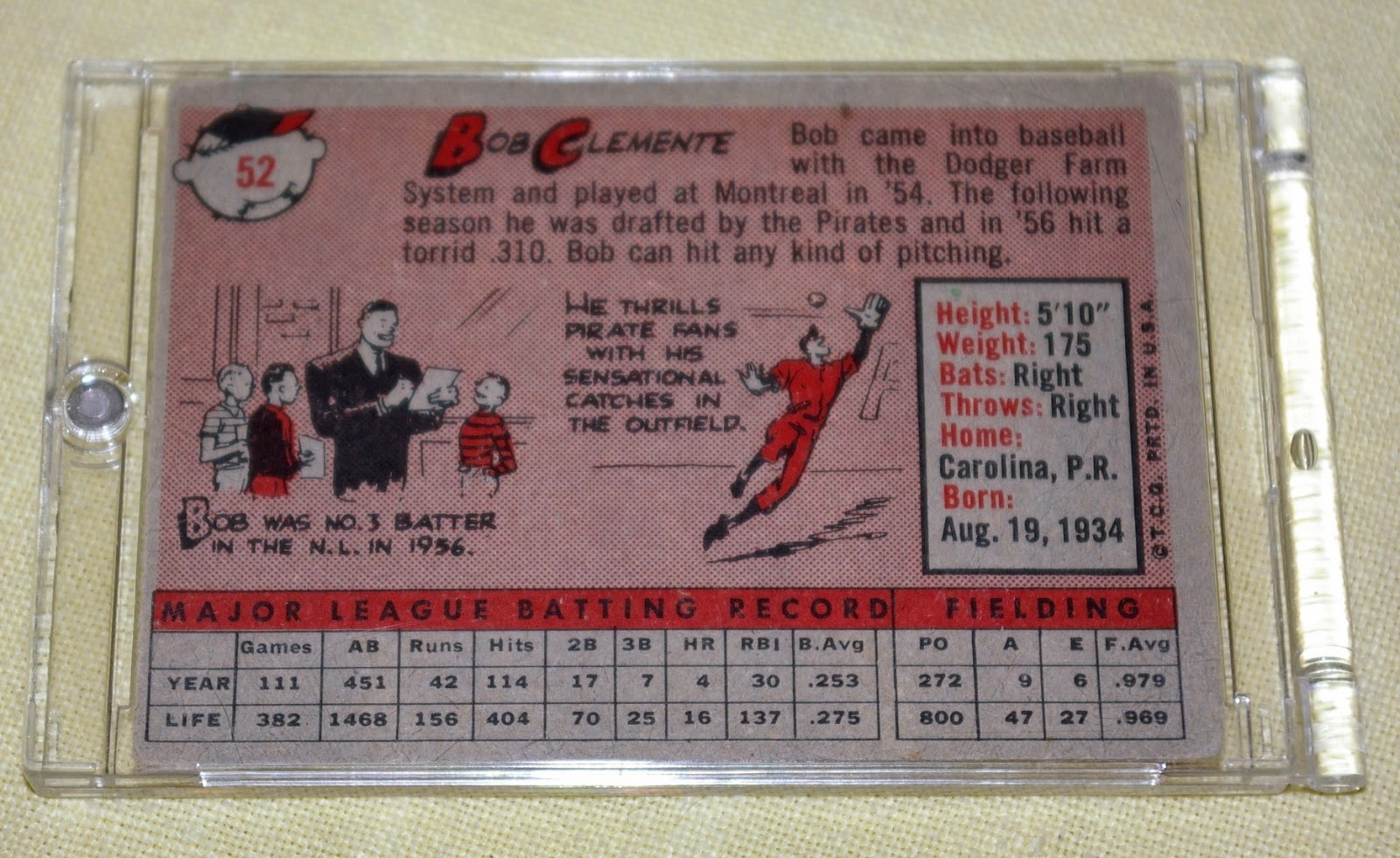 Love this card. By the way, check back tomorrow for what may be-- not to oversell it-- the greatest Roberto Clemente themed baseball card blog post of all time. I'm excited for it.

Anyways, there's a recap of the card show and music festival, both making for a big, fun-packed day for me. Thanks for stopping by and allowing me to share the tale with you!
Posted by defgav at 11:24 AM