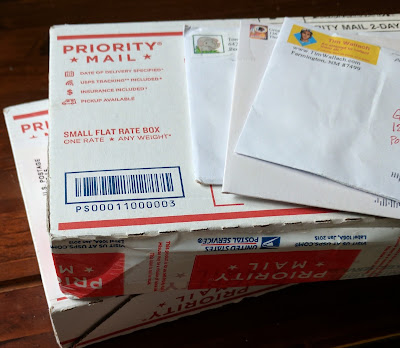 Nothing like coming home from a trip to find several mailings of cards waiting for you! And I missed the monthly card show while I was gone, so this windfall helps take the sting out of that.

I'll get to some cards in a minute, but first I'd like to recap my trip a little more (see also my previous handwritten post from the road [which I've had to update a couple times due to Blogger not uploading some of the images the first time. That's what I get for trying to do a blog post with just my phone, I guess.]). 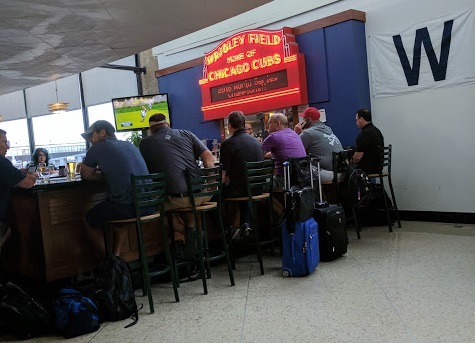 I didn't get a chance to see Wrigley, but I definitely felt like I was in Cubs territory at O'Hare on my looong, delay-riddled layover. (FWIW, I did see a couple crew workers on the tarmac in White Sox hats). I flew through O'Hare on my way home, too, but thankfully it was much smoother the 2nd time 'round, and I was in and out in under an hour. (Didn't have time to find/bug Nick again.) 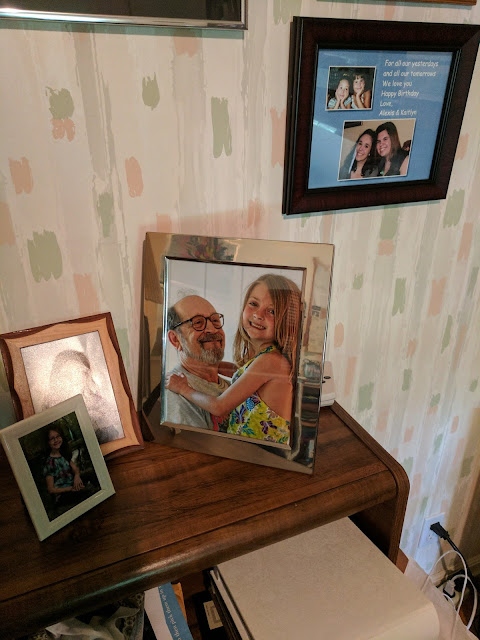 Rest in peace, Uncle Joe! While I was in town, I stayed at the house of Joe and Jinny (on an air-mattress in the exercise room) along with a few other family members. That's kind of a weird (in a mostly-good way) experience, to stay at the residence of deceased people while you're in town to memorialize them. I took a bunch of pictures to help me remember the place. 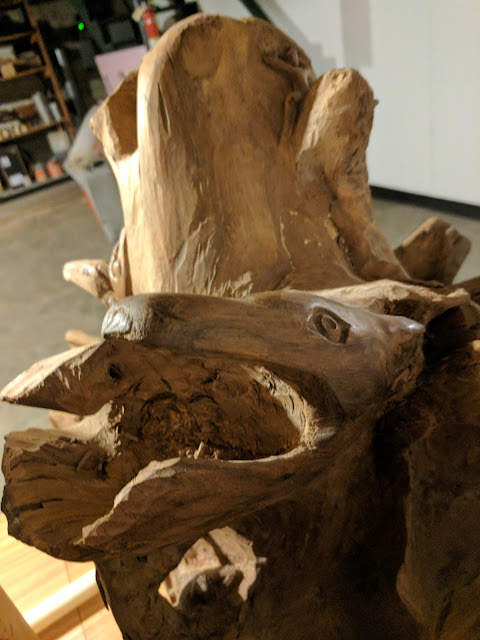 Joe was a talented woodworker. Here's a piece that is destined to go unfinished. I think this was his "warm up" piece of wood to mess around with. Check out the little man maxing in the upper right. I probably should have photographed some of his finished pieces that are featured around the house (and are in demand with the family as far as splitting up the estate), but when I stumbled upon this down in the basement, I thought it was really cool. 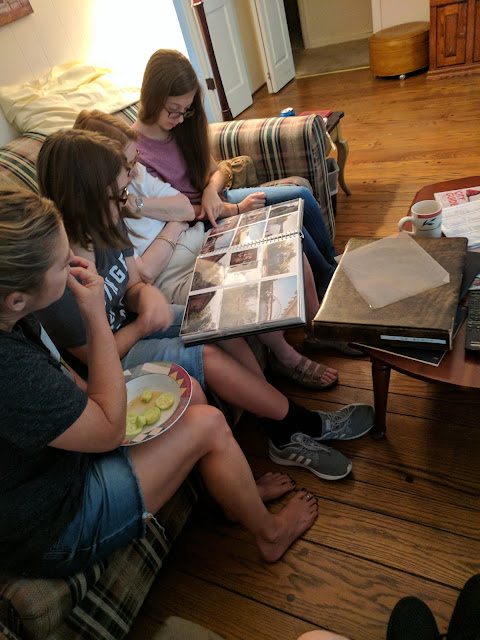 Thankfully it wasn't strictly a somber affair of sobbing over their passing, but rather mostly a celebration of their lives and coming together as a family and joyfully reminiscing, as I'm sure they would have wanted it. 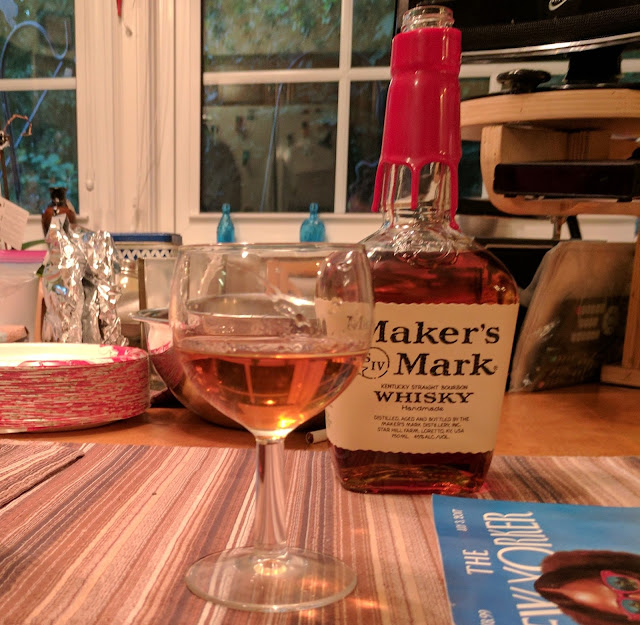 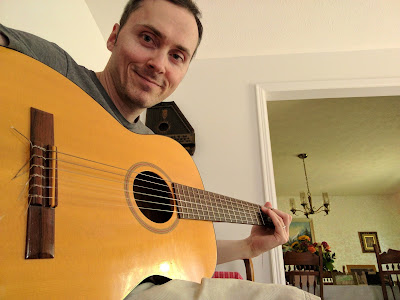 Whenever I'd visit them, I always loved strumming Joe's acoustic guitar for a bit. Was happy to get to play it for one probable last time. He was a big fan of the likes of John Prine and Cat Stevens. We exchanged mix cdrs a few times. I should dig those out and give another listen in his honor. 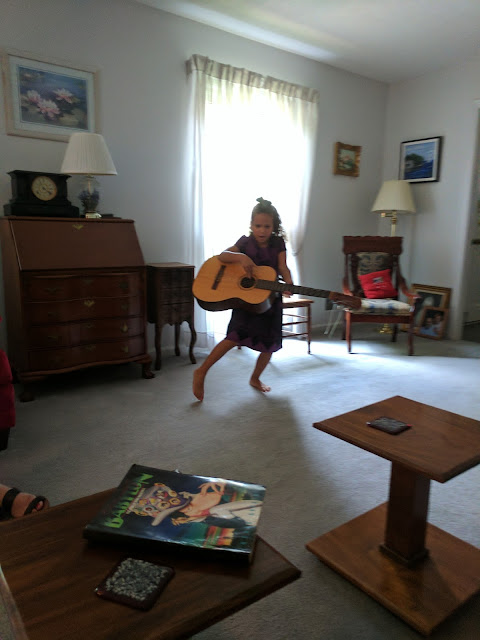 My little 5-year-old cousin (actually my cousin's kid's kid.. "first cousin thrice removed"?) found me playing and then did some rocking out of her own. We had a nice little jam session. I hope she goes on to become a rock star. She's got the moves down, just needs to learn a couple chords.


But yeah, my incoming trade packages have been piling up a bit, so let's get to showing off some cards! I'm going to start small (quantity) because that's easier.

First up is a one-card blast from GCA. 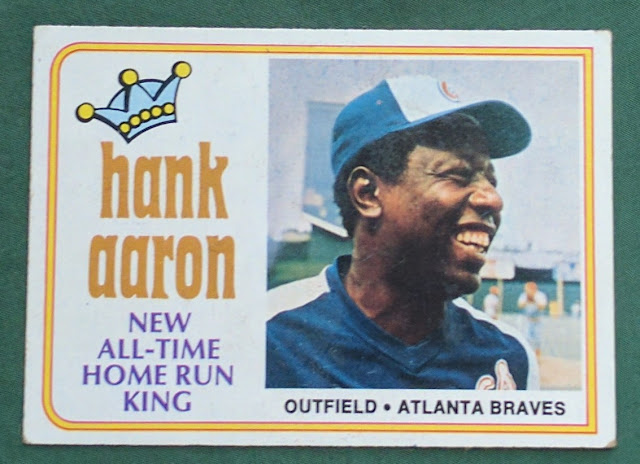 This iconic '74 Hammer has been a card I'd like to find (CILF) for a long time. Love it! Big thanks, GCA! Much appreciated. I'll try to return the favor sometime, though I often have a tough time digging up much from your wantlist. 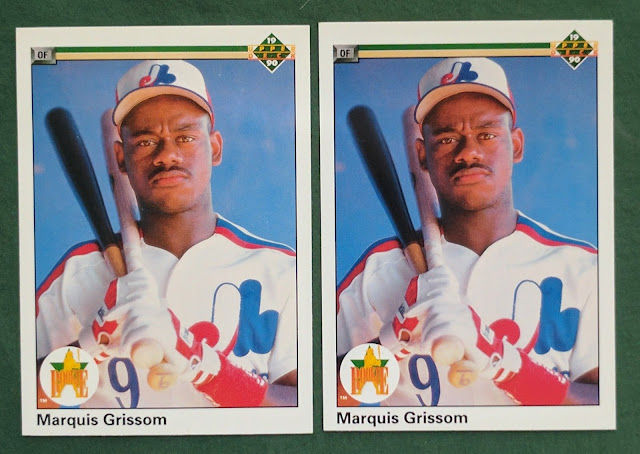 Here we have a 2-card (well, 2 copies of one card) PWE from jacobmrley at Starting Nine. Always appreciate any 90UD Marquis cards that come my way as I approach 1000 copies.

Next is a PWE with 3 cards from 2017 Archives sent my way by the Tim Wallach Collector. 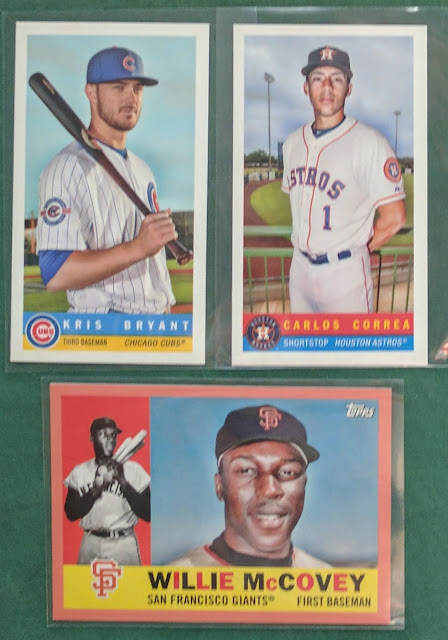 A couple Bazooka tallboy minis of guys I collect, plus a peach Stretch. (I feel I should make a Fruit by the Foot joke here or something.)

Thanks a lot, Stack22! I've got some 2017 Series 2 needs of yours packed up and ready to be mailed out within the next few minutes.

This post is pretty long, so let's wrap things up for today with a stuffed PWE from P-town Tom.

Gavin Cecchini has mostly been playing in AAA, but has gotten into 5 games with the big league club this season. 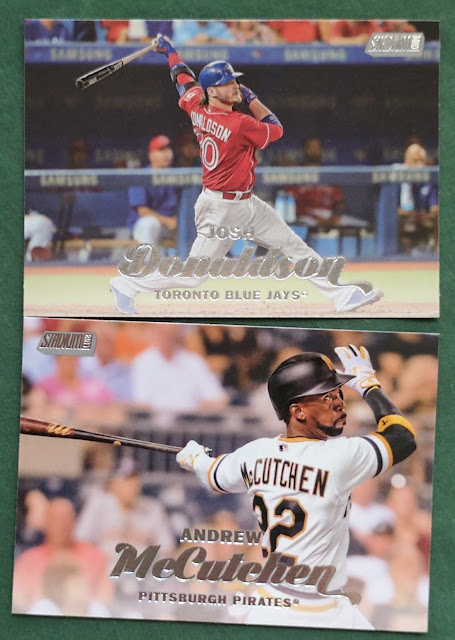 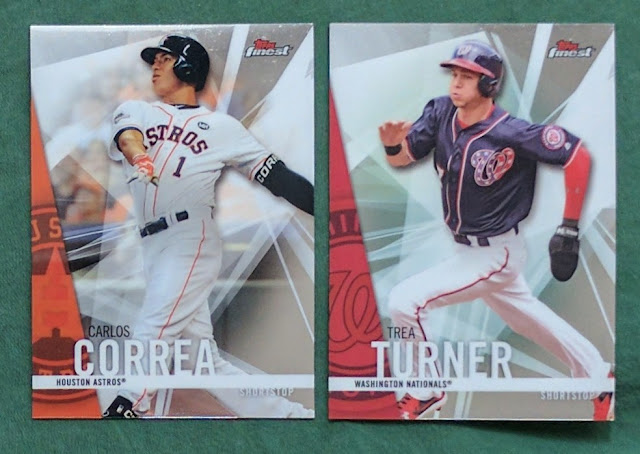 I definitely don't have much (any?) from this Topps Finest set. Happy to land this pair of hot young shortstops (both currently injured, unfortunately). 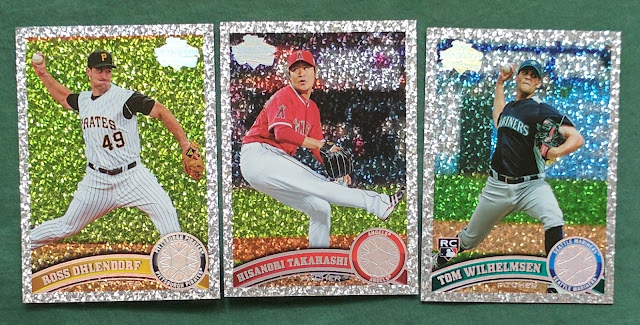 And 3 needs for my 2011 Topps parallel frankenset.

Thanks a lot, Tom! Great stuff. Glad I could help you break the 500 mark with your Kerry Wood PC.


So yeah, as I said, let's call the post good here for now with the PWEs, but I've got a few larger card packages I need to show off too, so expect those on the blog soon. (though it may be a couple days or more since I'm busy playing catch-up at work due to missing those few days.)
Thanks for reading.
Posted by defgav at 3:23 PM