Wes a.k.a. jaybarkerfan over at Willinghammer Rising is a great dude. Sad to see it seems like he's retiring from trading, but at least he's going out with a bang via his World Cup of Trading. You can see part 1 of what I sent him here (heavy on Willinghammer customs), with a small encore on the way shortly. Let's check out the great stuff Wes sent back in exchange. 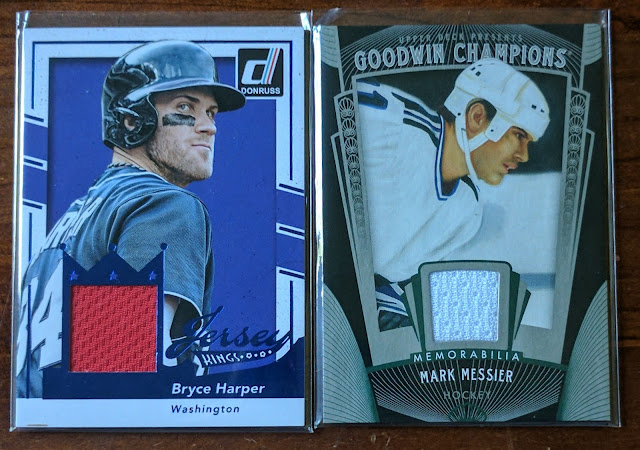 A couple sweet relics with Bryce Harper (a very blue card with a clashing red swatch) and Mark Messier (one of the very few hockey guys I kinda collect). 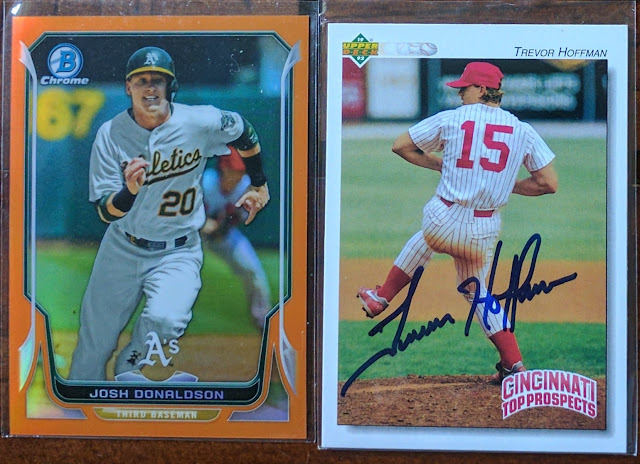 That Donaldson is #/25. And love the early Hoffman auto. Comes with a separate COA slip. Looks legit to me for the era, though as with most players, his signature got lazier over the course of his career. 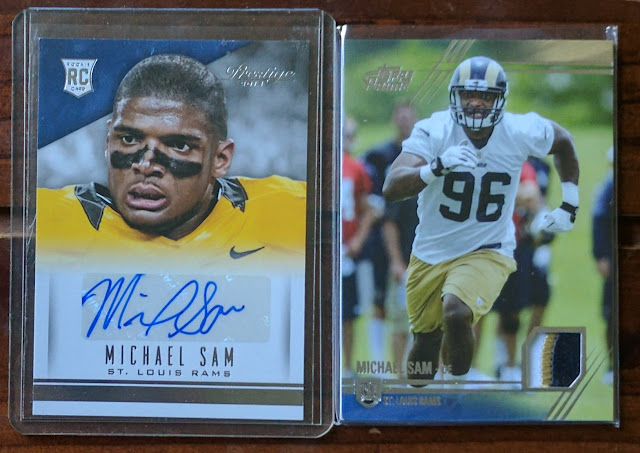 A couple Michael Sam autos for my Pride PC. 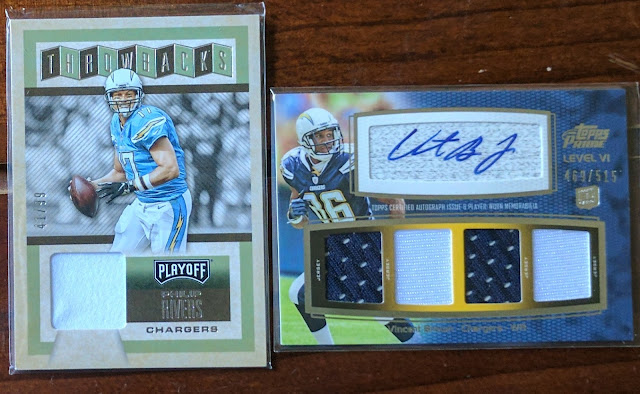 I know I've said "I'm done with the f*ing Chargers" over a dozen times on my blog by this point, but still, if a buddy of mine is giving away Chargers hits, I'll speak up for 'em. These are both very nice.

So those above were the cards I called dibs on in the WCOT, but of course Wes also include a brick of bonus cards. 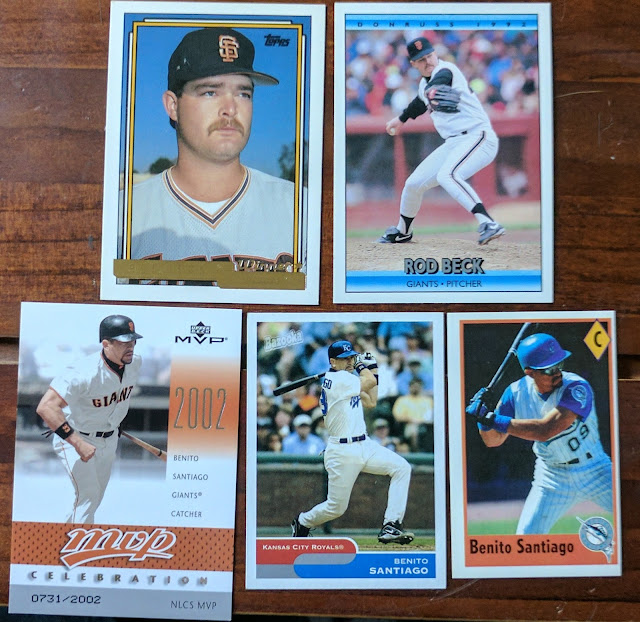 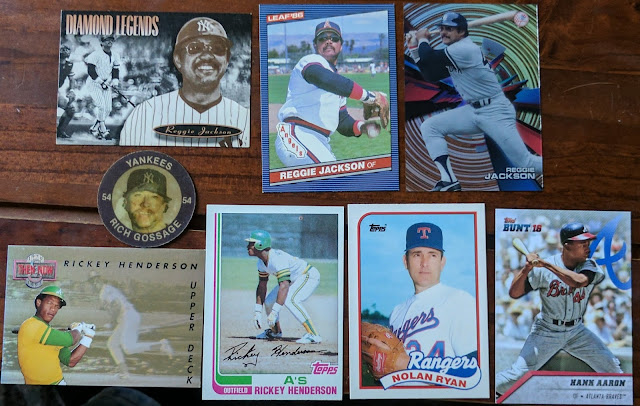 Julio Franco! Love those Revco cards, represented here by Big Mac. And how about that Teke box-bottom! 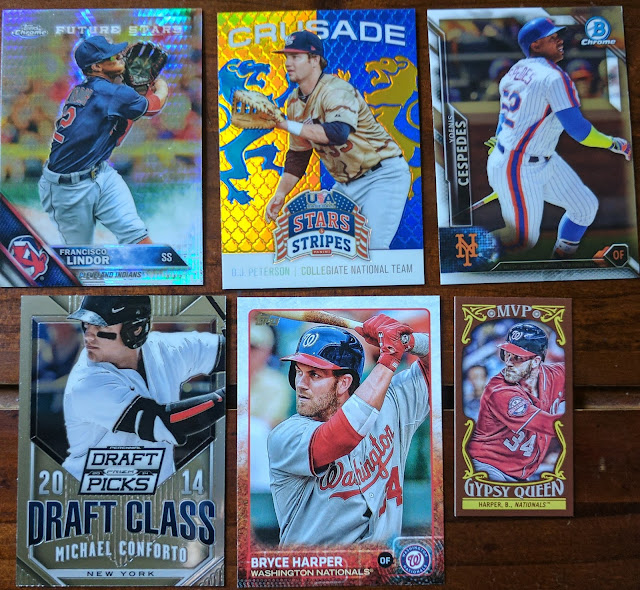 Here are some active guys, highlighted by a Lindor fishfractor. 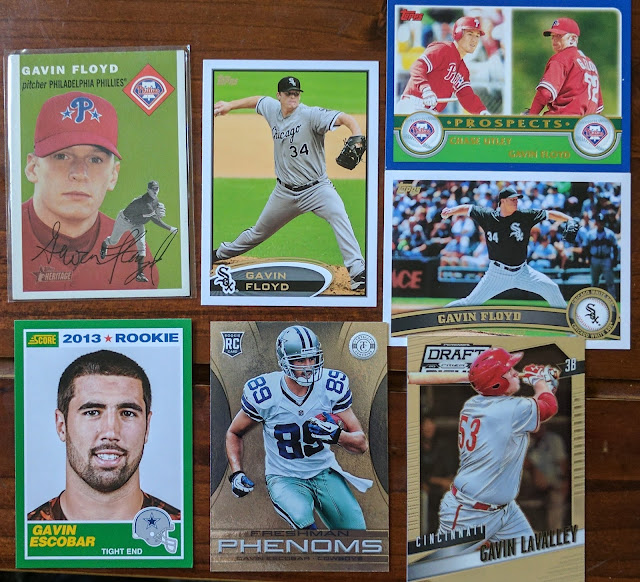 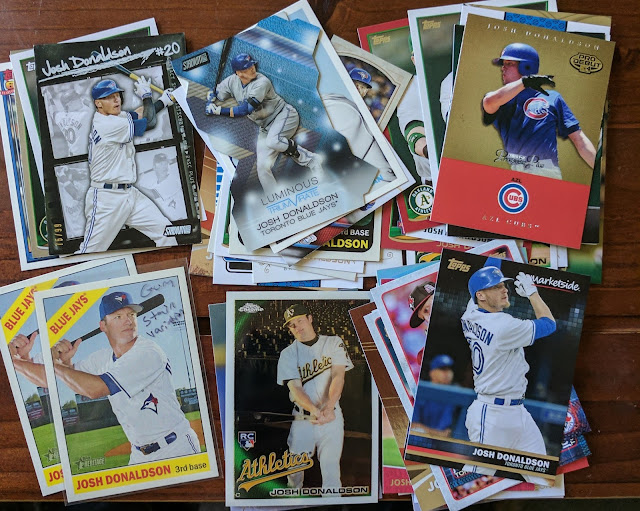 Big lot of nearly 50 Josh Donaldson cards! Wes PC'd Donaldson for a while there. I wasn't collecting him at the time, and sent Wes a bunch (including, I think, that gum-stained Heritage that has returned home). But then I started collecting him, meanwhile Wes decided to focus on collecting a different Josh. This lot doubles my PC of the Bringer of Rain (who has only been bringing the drizzle this year, but hopefully he turns his season around soon). 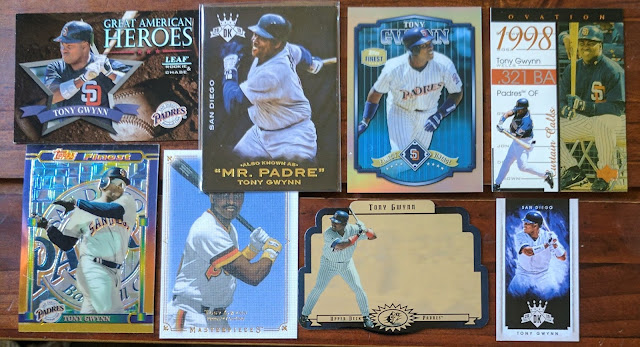 Great selection of Gwynns. Needed most of these. 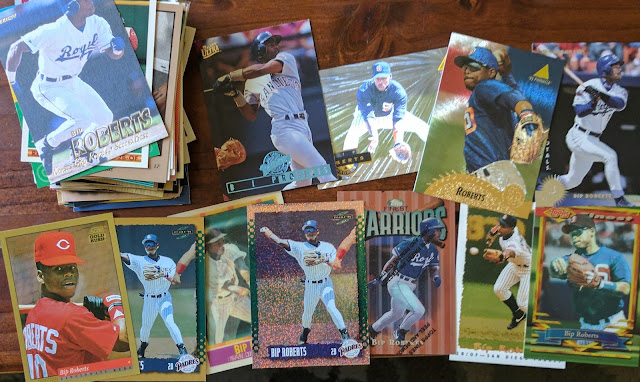 Wes really Bipped me good, with a big stack of nearly 100 Bip Roberts cards. While much of it was junkwax I already had, there were many neat parallels in here I needed.

We wrap up with this trio. While I love adding to my PCs, what really widens my eyes in trade packages these days is setbuild needs.. especially somewhat-obscure sets I'm working on. Those Bohemian Bread cards were a big surprise. I've mentioned I had the Garvey from the set way back as a wee tyke before I was really a collector, so it's a sentimental set for me for sure. These 2 aren't in mint condition (these cards came packaged in bread, for what it's worth), but I'm very happy to be able to check them off my needs.

And the Jim Abbott gets me one card (sticker) closer to completing the Glow Stars subset from '93 Fun Pack. 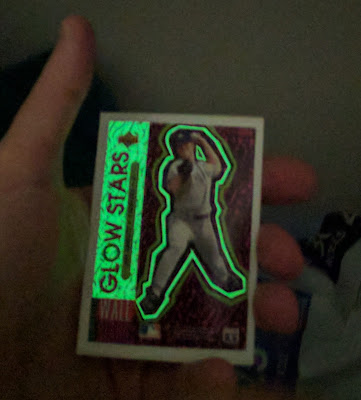 Here it is in action.

Huge thanks, Wes! Awesome batch of cards. Hopefully it's not the last card package I ever receive from you, but if it was, it was a great one to go out on. All the best in all life has to offer!