Blog bat-around time. Here are 10 (or so) cards I'm keeping an eye out for. 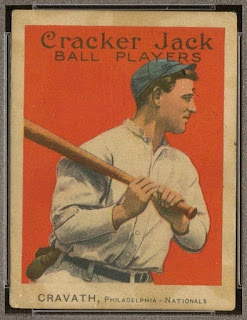 1914 Cracker Jack Gavvy Cravath would be a crowning addition to my Greatest Gavins collection. But it's too expensive, so I might have to give up on it. No way I'm paying 4-figures for this card, as it typically goes for. Maybe if I luck into a beat-up PSA1 for a couple hundred, I'll go for it. 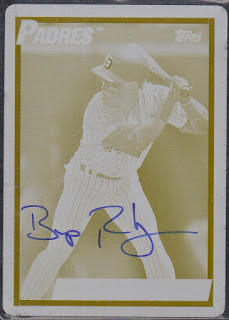 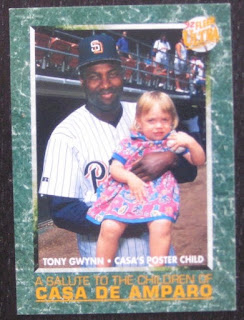 This 1992 Fleer Ultra Casa de Amparo is actually a "grey whale" since I could nab it right now for $11 if I wanted, but I'd like to hold out for single digits, closer to $3, preferably.. seeing as it's essentially a junk wax card. Would be nice to complete the 1992 Fleer Ultra green marble Gwynn tribute. (Technically, I already own this card, but it's in very rough shape, so I'd like to upgrade.) [Update: got one!] 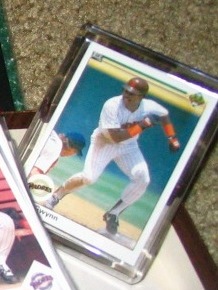 A sentimental pick here, a 1990 Upper Deck Tony Gwynn in a thick slab of lucite was given as a birthday present to my buddy Doug back in the day (circa 1991), and then eventually traded to me, and then I got rid of it when I moved out of state. Now I regret it, and though it's a silly, pointless "paperweight" of a thing, would love to find another one of these, but haven't come across one in the years since. Here's a tie for a coupe Kirby Puckett autos. This 1996 Leaf Signatures auto (pictured) or the 2003 Topps Retired auto (preferably the /25 refractor parallel, but that'd probably be too rich for my blood) would be sweet to add to my collection.
(Update: I've since gotten the 1996 Leaf Signature card!) 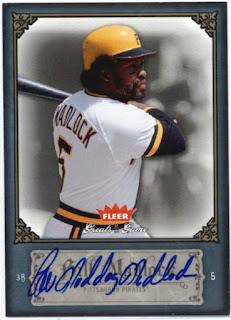 Nickname auto! I want a Bill Madlock certified autograph with the "Mad Dog" included in the signature. Got eyes on one on eBay right now, so back off. In fact, let's post this at midnight on Friday night, and not tweet out the link to the post, just to make sure the number of views is minimal.
(Update: I've since gotten a couple different "Mad Dog" nickname inscription autos!) 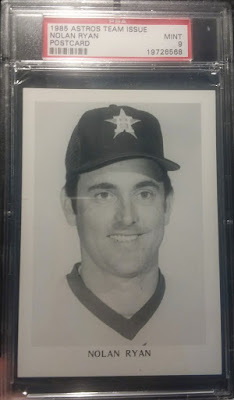 Now, I don't want this Nolan Ryan... I actually want the Chris Jones 1985 Astros team issue postcard, but the Ryan is the only one I've ever seen from the set, so it's pictured here. I've got a few minor league cards of Chris Jones (white guy from the 80s, not to be confused with the black guy from the 90s), a guy who went to my high school, but the only collectible item from his brief stint in the bigs is the team issued postcard. Hopefully one pops up for sale someday. 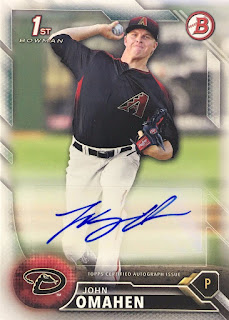 I need the 1/1 metal parallel to complete the 2016 Bowman master rainbow for John Omahen, the only mainstream release he got, another dude from my high school. He didn't pitch in 2017, so I'm assuming he hung them up. I'll have to do a "Guys From Granite 2017 Recap" post soon. Anyways, pictured is the base auto, but I don't think the metal parallel looks much different, just a little grayer. Odds are some shlub pulled it and didn't even realize it was a 1/1. But hopefully it pops up for sale someday. 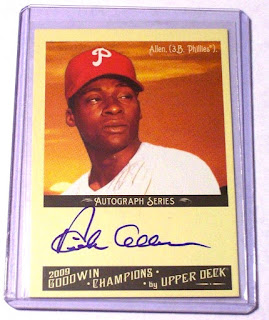 Man, I went looking for a picture of this 2009 Goodwin Champions Dick Allen auto just now and saw one had sold on eBay recently for "$40 Or best offer". Goddamnit! I would have happily paid the full $40. I'll have to revise my search terms so it doesn't slip by me again. Love the badass look on his face and the sunset backdrop. Been trying to land one of these for a few years now after narrowly missing out on it. Heartbreaking that I just missed out on it again (If it's any consolation, this one looks to be pretty off-center). But someday!
(Update: Finally got one in Oct 2018!)


That's it. I could have also listed big cards like a Clemente rookie, '52 Topps Mantle, and whatnot (such as 2004 Topps Retired autos of Aaron and Banks needed for my setbuild), but these above are some special cards that I'm specifically keeping an eye out for these days.


Oh, and it seems there's been a rash of spambots commenting on the cardsphere lately, so I messed with my settings and-- at least temporarily-- you need to be a "member" to post a comment here now. I believe that's the same as being a follower. Hopefully the few regulars who comment on my blog are still able to comment. Sorry for the inconvenience. UPDATE: well, apparently "member" of the blog only means me. That won't do. So I undid that change. I really wish Blogger would get better anti-spam options. Oh well.

Thanks for reading, guys.
Posted by defgav at 12:12 AM