I like posting my player collections on the blog like this. It's a good way for me to take stock of what I got (since I don't typically keep records of my collection other than setbuilds) so I can figure out what I still need, plus it's also for trading partners to see what I need (and what I don't need, to hopefully avoid sending me dupes).

The latest PC to feature is Bill Madlock. I've actually already done a PC post for Mad Dog, but that was way back in January 2014, and I've since added many cards, so figured it was time for an update since he's one of the main dudes I collect. 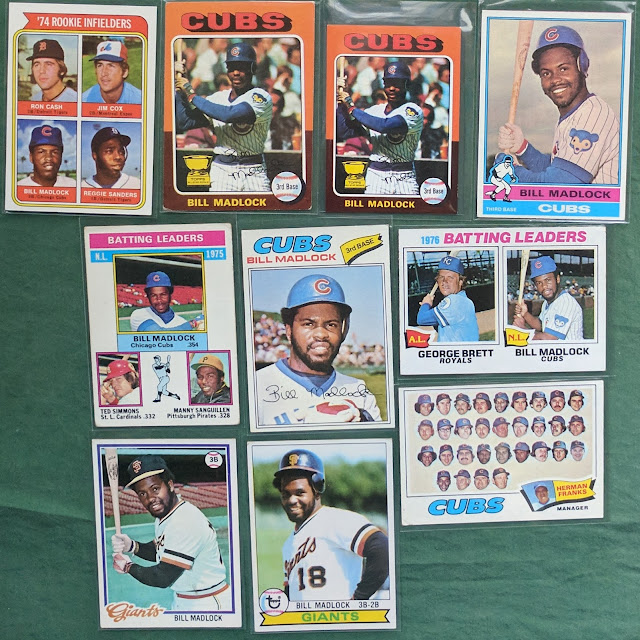 Starting with 70s Topps. I don't think there's any Topps flagship I'm missing from this decade. Even snuck in a Cubs team card since Bill's floating head is easily identifiable near the middle. 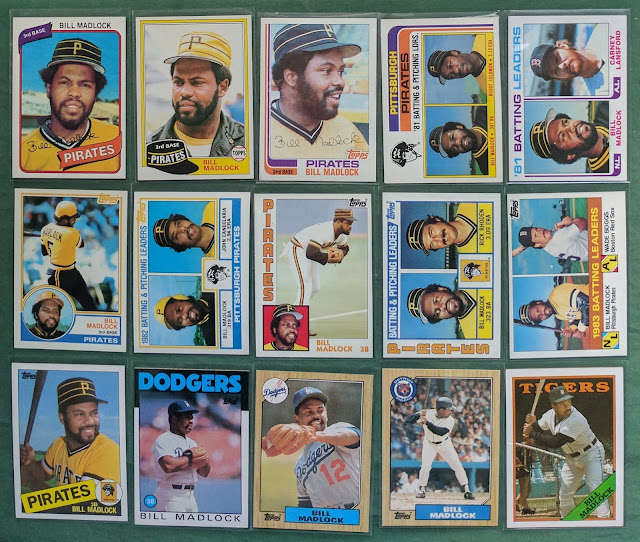 1980s Topps flagship. I hate to post pics of cards on their sides like this, but it was just frustrating me way too much trying to otherwise fit them all together.

I think I'm only missing one Topps flagship card: a "NL career batting leaders" card from 1984 shared with Pete Rose and Dave Parker. 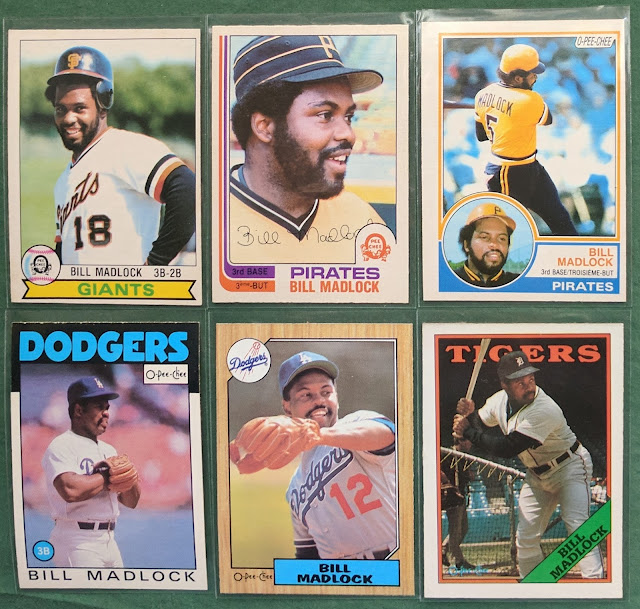 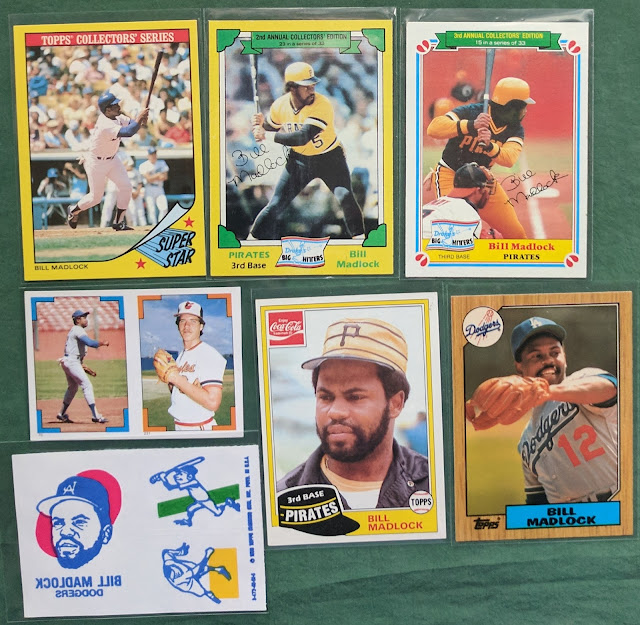 Here are some Topps oddballs from his playing days. The 1987 is Tiffany. Still need a bunch of his Tiffany cards, which if you're not familiar, were available in "Collector's Edition" factory sets with better card stock and glossy fronts. I believe they started doing those sets in 1984.

Some autographed Topps cards Tony L. was kind enough to send my way, I believe TTM successes for him as a kid in the early 80s. 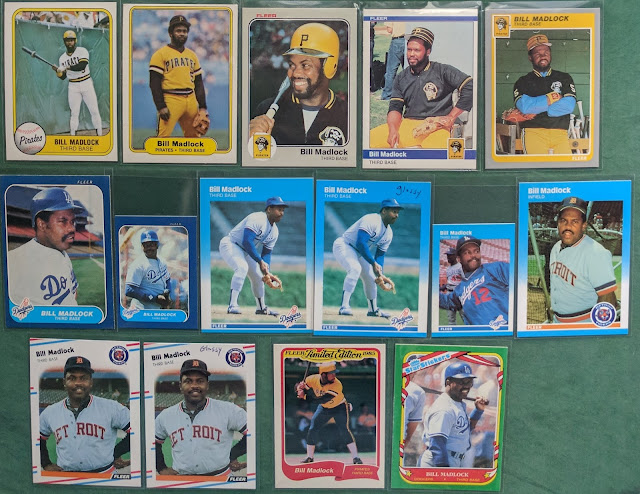 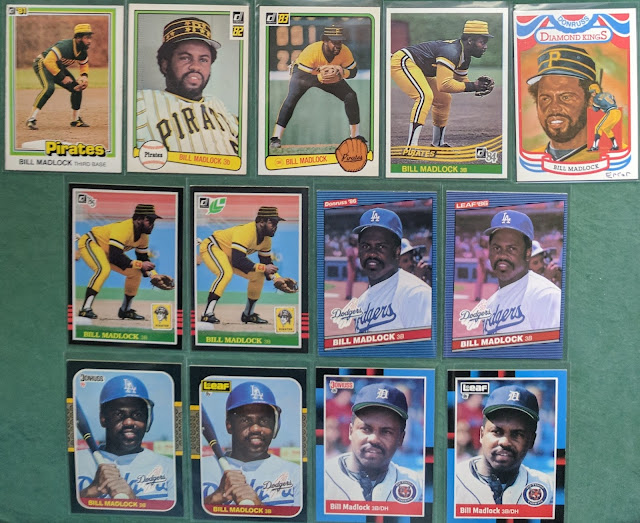 And not much missing as far as Donruss/Leaf. The Diamond King is an error with the small text on the back reading "Perez-Steel". The corrected version ("Perez-Steele" --note the "e" on the end) is harder to find. 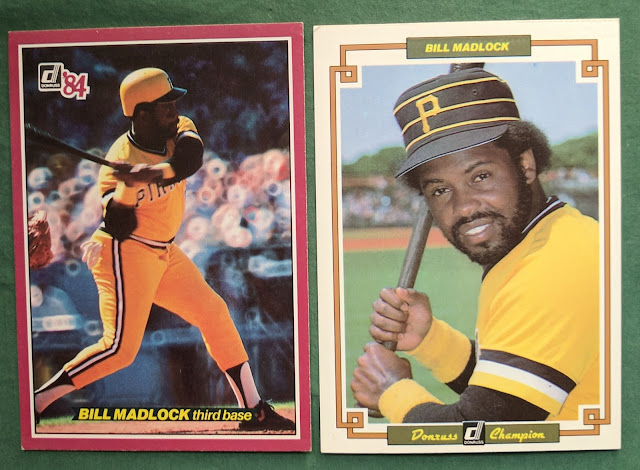 Here are a couple oversized Donruss cards from 1984. I think the only Donruss card I'm missing from his playing days (besides the corrected DK) is 1987 Donruss Opening Day. 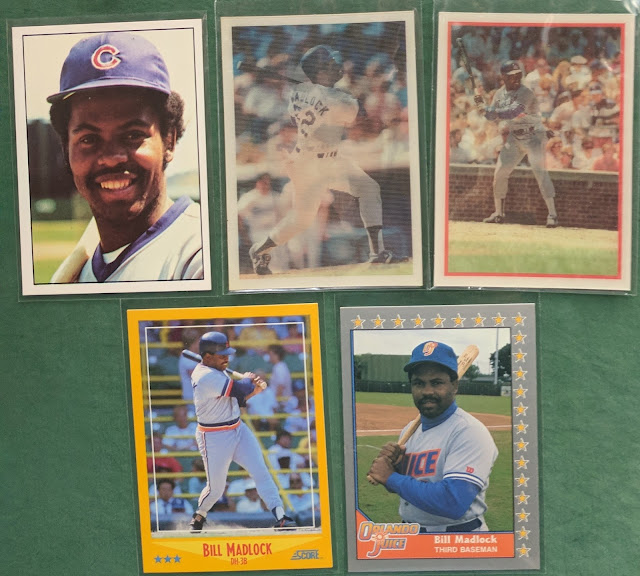 Some oddballs/etc from his playing days. Some needs include 1975 SSPC Puzzle Back, some multi-player 1986 Sportflics cards, 1988 Sportflics, 1988 Score Glossy, and all his Hostess cards from the 70s. He's also got a few Kellogg's cards I need. (How do I have none of his Hostess or Kellogg's cards?! That's a travesty I need to work on rectifying.)

Love the Senior Professional Baseball Association card. I've mentioned it before, but I really think something like that would be more successful today than the ill-fated 1989-1990 run. I think baseball fans are more nostalgic now than they were back then, thanks in large part to the internet. Imagine guys like Bonds and Vlad playing on senior league teams right now! Hell, Rickey Henderson is still willing and able to play. Maybe even talk Griffey into it! I'd definitely pay to see those guys crank dingers and gingerly chug around the bases.

Anyways, back to the Madlocks.. Now we're getting into post-career cards. 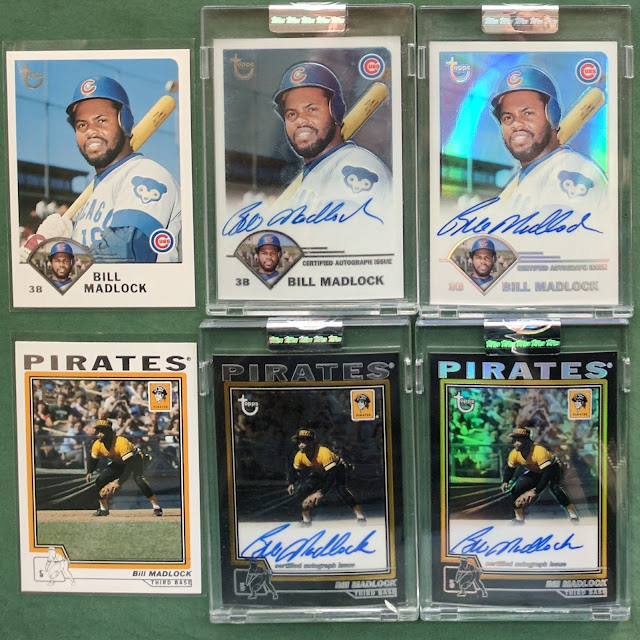 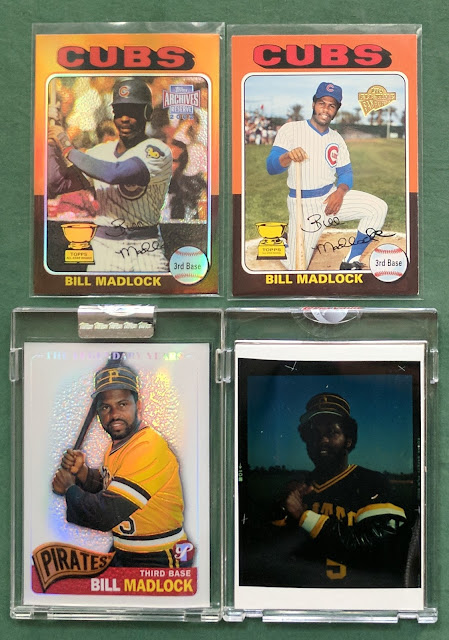 Some more recent offerings from Topps, including an original color negative from Topps Vault. 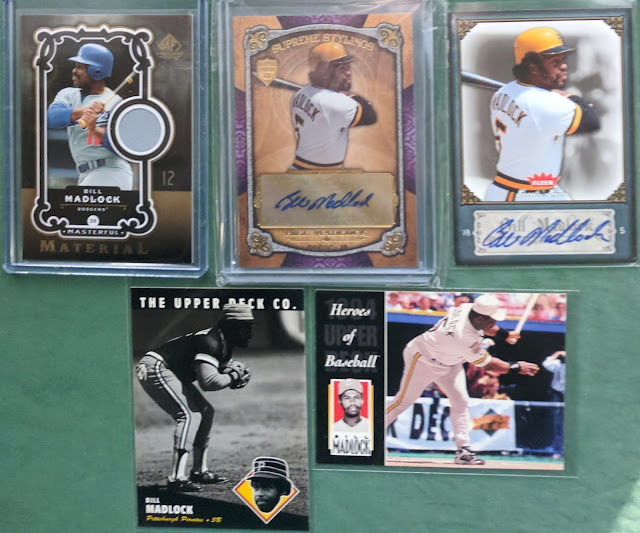 Some Upper Deck/Fleer stuff, including a relic and a couple autos. One thing in particular I've got an eye out for is a nickname auto with "Mad Dog" included in the signature. They're out there, but not very common. 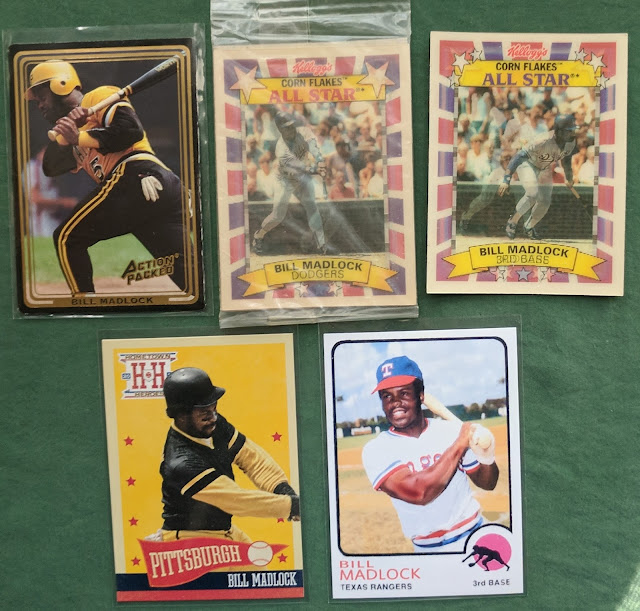 And some more miscellany. The Corn Flakes cards are the same, but one is still sealed (A grey area as far as if I should consider one a "different card"). Guess I was wrong when I said earlier that I don't have any of his Kellogg's cards, though this one is from 1992, after he retired, not from the classic run of Kellogg's cards that kids pulled out of cereal boxes from 1970 through 1983. There's also a Canadian version of this card that says "Frosted Flakes" instead of "Corn Flakes".
The 1973 Topps-style card is a custom I made a while back. 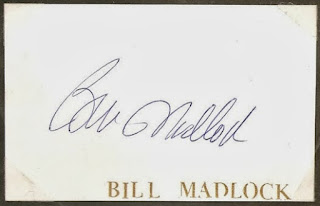 And finally here's what started my Madlock collection: an index card I got signed by him in person as a kid at the 1992 All-Star Game Fanfest in San Diego.

Looks like I've fallen just a few cards short of my goal of 100 different cards. So help me out if you can! Thanks.
Posted by defgav at 3:11 PM