Redeeming a lost week with a huge pull

I've been battling an infected finger since last weekend. The tip of my middle finger on my right hand is fat, red, and ranges from mildly sore to excruciatingly painful. I got prescribed some antibiotics on Monday, but they haven't been doing much and now I've got a follow-up appointment tomorrow to hopefully figure something out. I haven't been able to go into work, and with limited use of my dominant hand, I've been pretty useless the past few days, just surfing the web and watching Netflix, occasionally napping due to pain pill drowsiness. I'd love to use this downtime for sorting cards and whatnot (I got a few takers on my recent "CDs & cards" offer that I need to pack up), but with a throbbing right hand, I'm limited with what I can do. Even typing up this post is tough.

To cheer myself up, I've been ripping the third and final box I picked up a while ago of 2016 Allen & Ginter X. And wow, this was just what I needed to perk myself up today... 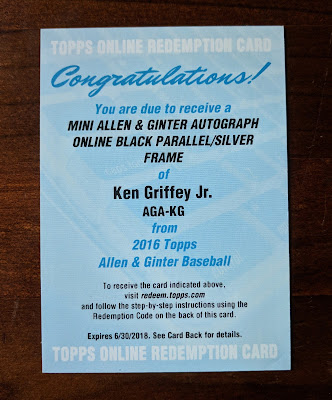 This was deja vu for me. Pull a redemption card.. at first I'm disappointed.. then I look at the name and see it's Griffey, then happily yell and jump around. Same thing happened last year with a box of Archives, if you remember that. Crazy that lightning struck twice for me pulling Griffey auto redemptions!

Looks like this card is already live (there's one on eBay right now with an asking price of $700 OBO), so it shouldn't take long to be redeemed.

Nice hit from a $30 box! I pulled a Robinson Cano auto from my first box, then Sox reliever Brian Johnson from the second. I thought for sure the final box auto would be like Henry Owens or Marlins Man. So to pull a Griffey, the freakin' all-time HOF vote-percentage-getter, really knocked my socks off and has brought a jolt of happiness into an otherwise rough week for me.
Posted by defgav at 2:14 PM