Here's a really cool one to take a look at for the next Glow-in-the-Dark spotlight this month:
1938 Bocnal Tobacco Co. Luminous Silhouettes of Beauty & Charm

This 25-card set of tobacco card minis from England is likely the very first example of glowing trading cards. These don't show up in searches on TCDB or COMC, my two go-to sources for researching cards, so I guess it's not a surprise that I was unfamiliar with them until recently. Shoutout to Nick Vossbrink for giving me a heads-up on Twitter a while back. Shortly after I found out about them, I snagged a complete set on eBay.

The name "Luminous Silhouettes of Beauty & Charm" is probably a misnomer. You might expect a set with that name to feature something like flowers or ballerinas. But no, each card features an image of a sport (or a candy, in the case of Skittles.. lol, jk.. but I've never heard of the sport of Skittles. Looks like a cross between bowling and discus). No specific people are named, which probably hurts their "collectability" today.. Just imagine if stars of the day like Lou Gehrig or Joe DiMaggio had a card in this set! But then again, as they're from the UK, there isn't a card for baseball, with Cricket being as close as we get.

As you can see, the cards are black and white-- just pretty basic pictures that resemble chalk drawings on a blackboard-- so they're not all that interesting in the light. But check out that glowing action, keeping in mind that these are from 1938! Topps is struggling to make glow-in-the-dark cards look good as recently as 2018 (referring to the pathetic glow-in-the-dark parallel minis from Ginter last year that hardly glow at all. The Constellations minis from 2017 Ginter weren't too bad, though). A whopping 80 years prior, this little-known UK cigarette company was cranking out these sweet minis that look great in the dark. Jolly good show, chaps!

Hmm.. check out the mark above the "G" in "CYCLING". At first I was thinking perhaps these cards were made by printing black ink on top of a base layer of glowing ink, but the fact that not all the white area glows (specifically the border and the text) disproves that theory. I guess that mark above the G is a smudge of stray glowing ink, not a scuff that revealed the glowing part underneath.

I suppose this is technically my oldest hockey card now. And hey, if you collect cards of animals, there are dogs and horses here to target.

Hard for me to pick which is my favorite of the 25 cards, but I might have to go with Running since that's the only sport I ever did on any organized level (track team in high school). But yeah, these are all pretty neat. Imagine some British kid being given one of these by their father during the months leading up to World War II and being endlessly amused by it glowing while life outside is getting scarier by the day. 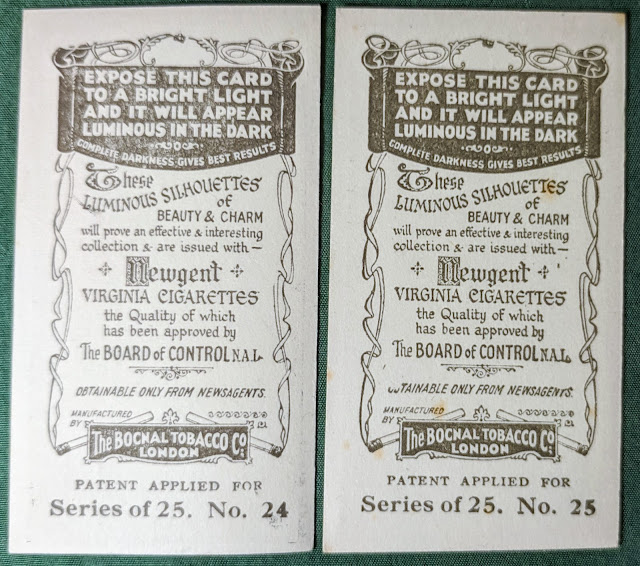 The backs are all identical except for the card number in the bottom right. They look cool, with the old-timey fonts n' such, though I kinda wish each card had a little a write-up about the activity pictured. It'd be interesting to read how these sports were described back then, perhaps including a sentence or two regarding the origins of each activity. Plus I'm a little curious what Skittles, Deck Tennis, and Fives are.. though not enough to Google it.

The set I bought seems to be in great condition for pre-war cards. It's almost enough to make you suspect they're reprints or counterfeits, but then I remember that these cards are generally only worth around a buck or two each (the Ice Hockey card is known as the most valuable in the set, at least here in North America, but even that shouldn't set you back more than a few dollars). The fact that they glow in the dark complicates the production process to the point where it wouldn't make a lick of sense to go through the trouble to reprint/counterfeit these things, so they definitely seem to be legit to me.

If you do an eBay search for Bocnal Tobacco, the only cards besides these that pop up are a set of lighthearted proverb cards (that don't glow), also dated 1938. But those two releases seem to be the only trading cards the company put out (unless maybe there's some rare stuff that doesn't pop up for sale often).

For further reading, the Luminous Silhouette cards were featured in a post at prewarcards.com a couple years back.

So there you go.. glow-in-the-dark minis from over 80 years ago. Neat!
Have a great weekend, everybody.
Posted by defgav at 3:57 PM