got myself a glow-in-the-dark bat!

I follow a guy named J. Daniel on Twitter who churns out several solid baseball-related tweets per day. A couple weeks ago he tweeted out something about glow-in-the-dark Louisville Slugger bats being available. Welp, I had to get myself one.

Personalized! Made it the new header for the blog, at least for a little while.

They make you check a terms & conditions box when you order saying that the bat is for decoration only, not for actually hitting baseballs with. Guess they must use softer/cheaper wood for these? Sadly, I don't think I've cranked any fly balls since the late 90s, so that wasn't an issue for me. Plus it wasn't exactly cheap ($70), so it's not like I'd want to risk breaking it or getting it all scuffed up.

It's got a little baseball ghost guy on it, playing up the Halloween angle. Me, I'm down with glow-in-the-dark stuff 24/7/365, not just in October, but the little guy doesn't bother me too much. 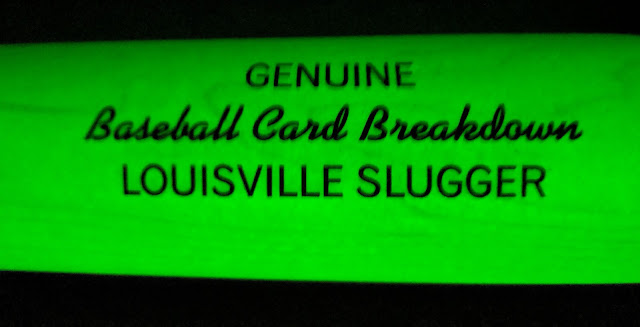 I've found it to be a crapshoot with picking up glow-in-the-dark stuff (especially cards)-- sometimes they glow great, other times they barely glow at all. Thankfully, this bat glows nice and bright. Love it!

Not the easiest to photograph while glowing, but you'll have to take my word for it that it looks good. Swinging it around in the dark is almost like wielding a lightsaber, but without the cool sound effect. LOL

Anyways, if you're interested in getting one for yourself, the link is sluggergifts.com [free shipping until 10/13] (I am not being compensated for this link, btw.)

Thanks for reading and have a great weekend!
Posted by defgav at 8:15 AM

Email ThisBlogThis!Share to TwitterShare to FacebookShare to Pinterest
Labels: glow-in-the-dark