I've done a few comic book posts here in the past couple years, and up to this point they've all been '70s "cartoon" comics (Richie Rich, Huckleberry Hound, Scrooge McDuck)...books that I like but were before my time. But now I'm jumping to the early 90s with a comic I was into as a preteen: The Maxx.

It's almost hard for me to admit, but for a short time around late 1992 / early 1993, I was actually more into comics than baseball cards. I would soon give up collecting both, as music and girls became far more interesting to me around mid-93, and my collections got boxed away. When I moved out of state in 2009, the bulk of my collections were sold off, but I held onto some of my favorite cards and comics.

I've jumped back into baseball cards full-force as an adult, but only dipped my toe back into comic books so far. If money and storage space were no object, I'd likely go nuts on a bunch of vintage comics, but as it stands, I probably buy a comic book maybe once or twice per year.

The most recent addition to my comic collection is one that caught my eye because it was a comic I was into as a kid, plus it's a glow-in-the-dark variant cover, which is right up my alley. I got it a few months ago, but figured I'd finally feature it on the blog now since I'm kinda doing a "theme month" with a bunch of glowing cards/collectibles. This looks pretty good in the dark! The regular edition (that doesn't glow) features yellow gloves and the other parts that are white here (besides his teeth) are red.

I'm pretty sure I still have the standard cover of this one among the few favorite comics I held onto from my time collecting in the early 90s, though I must admit these have been "misplaced" for at least a couple years now. I used to keep them in one certain box, but at some point I moved them and started storing baseball cards in that box, but now I unfortunately seem to have forgotten where I moved the old comics to! Hopefully they're still in my house somewhere and will turn up one of these days.

Here's the small print. Dig the "why are you reading this?" easter egg. Cool that creator/artist Sam Kieth shared a mailing address for readers to get in touch with him.

I'm not gonna attempt to recap the story of this issue, but I'll show off a few random pages to give you a feel of it. 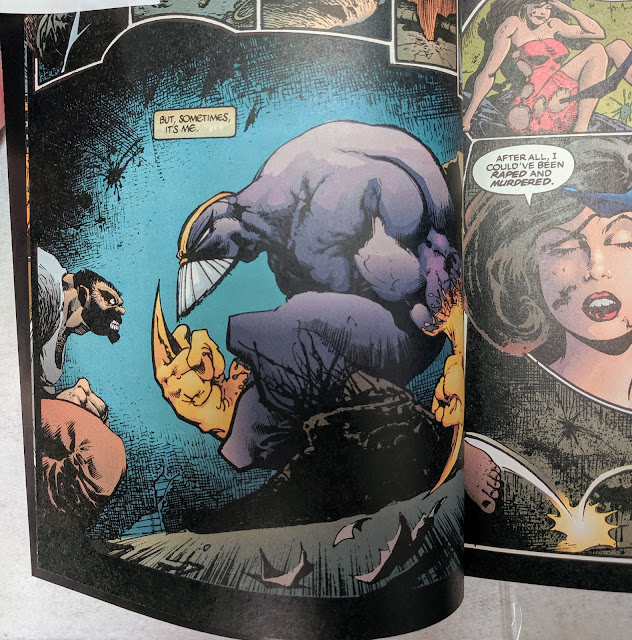 Always been a fan of Sam Kieth's art. I think he made his name doing a popular issue of the Incredible Hulk and some covers for Marvel Comics Presents (including my introduction to him: a very cool cover of Wolverine, which I had/ hopefully-still-have-somewhere), before branching out with his own title. The Maxx probably isn't for younger readers, as it can get a little dark with themes of murder and rape, though I wouldn't go as far as to say it's strictly "adult-oriented". 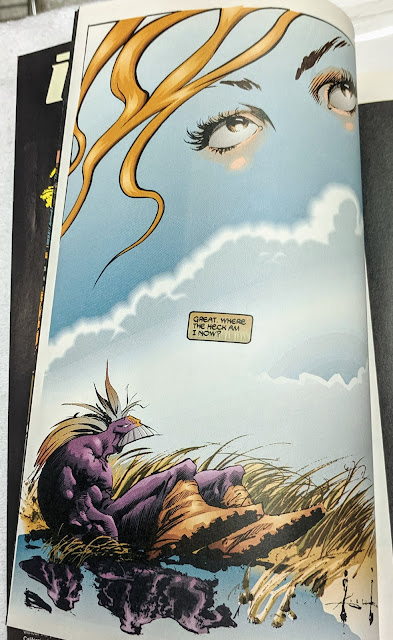 I don't always follow exactly what's going on in the story (it kinda jumps in and out of reality), but still a fun read. Maybe check the Wikipedia entry if you wanna know more about the storyline. 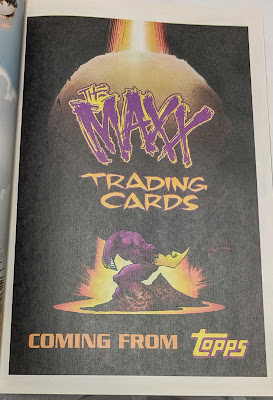 I hadn't realized Topps put out a set of The Maxx cards before seeing this ad. I wouldn't mind building that set someday, but not a priority.

I think I've also got a big PDF off all the issues of the comic, plus video files of the animated series (part of the MTV program Oddities), but haven't tucked into them yet. As a kid, I think I got up to issue 7 or 8 before I strayed from comics (looks like it ultimately ran for 35 issues), and I don't recall ever catching the show. 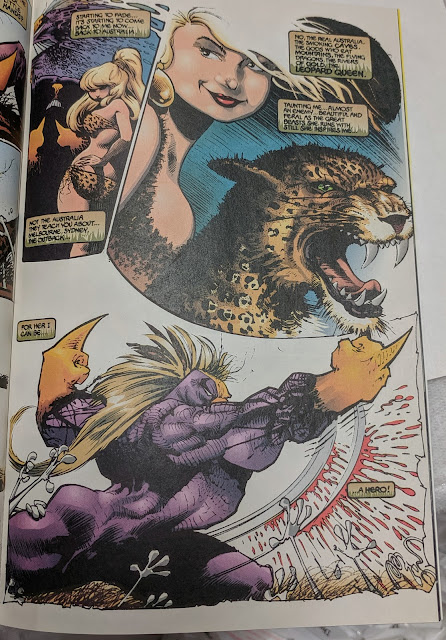 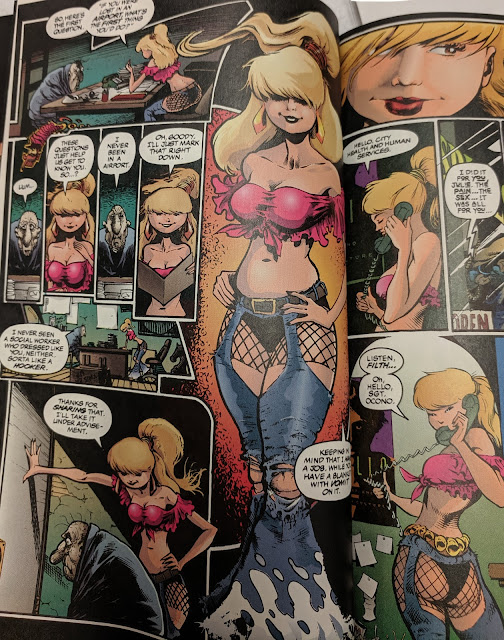 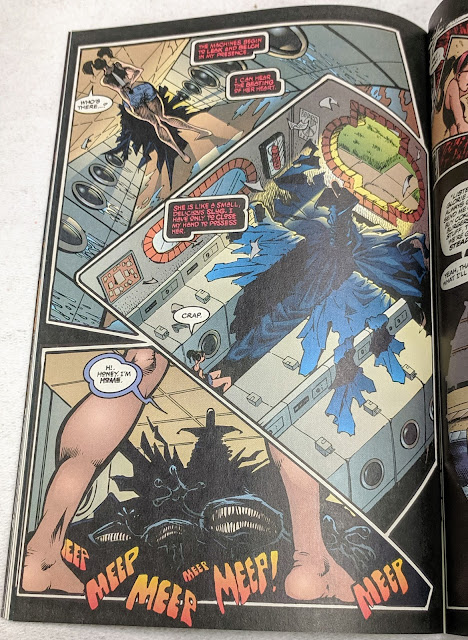 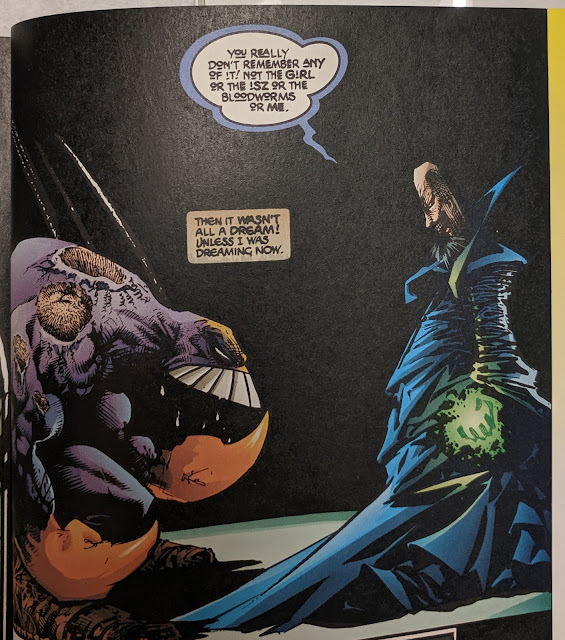 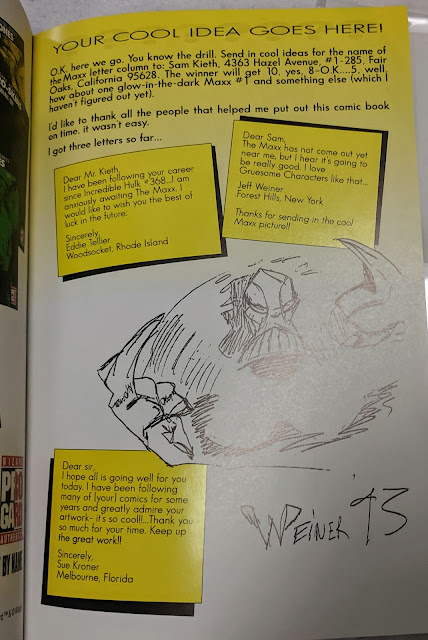 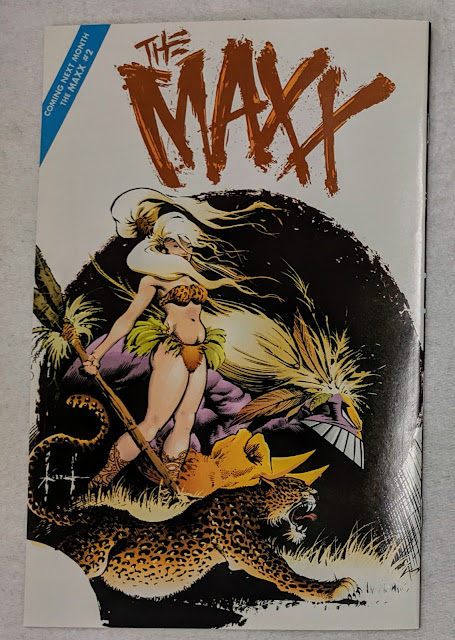 The back cover teases issue #2.

Anybody else into The Maxx?

That wraps up this hybrid post of the recurring blog serieses "Comic Book Breakdown" and "Glow-in-the-Dark spotlight". I usually take a look at some of the more amusing ads, but there were slim pickings in this issue. And I also typically post music videos from the time of the comic to punch up the post, but now that I'm doing a separate card blog for music, I've got an outlet for musical stuff and don't have to shoehorn songs in here so much.

But here's one of my favorite tracks of 1993-- plus the lyrics fit with The Maxx to the point where it probably would have made a good theme song (thinking of how the comic bounces between the outback dreamland and the gritty reality).

Thanks for reading.
Posted by defgav at 3:43 PM