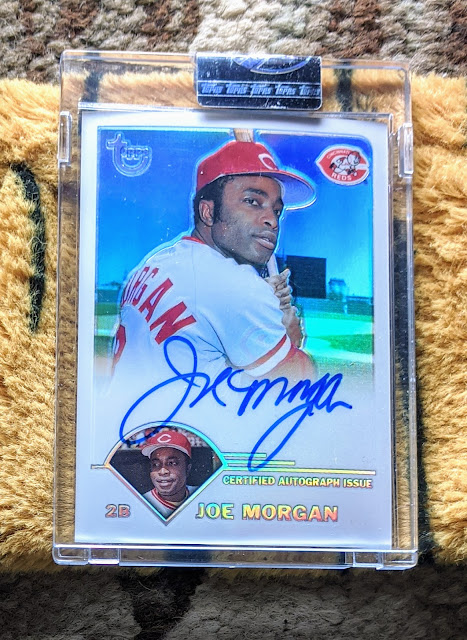 If you'll indulge me one more "I'm sad about my awesome dog who recently died unexpectedly" post, I'll get it out of my system and don't plan on mentioning the unfortunate situation again. This is kind of a downer post (more of a eulogy, really) and I don't blame you if you skip it.

But yeah, it's been a rough couple of weeks for me and my wife. We had been thinking Annie just had a minor digestive issue to work through-- the vet originally suggested we try switching her to a different kind of dog food-- but nope, it turned out to be some serious shit and before we knew it we were kneeling on the floor tearfully telling her we loved her as the vet put her out of her suffering for good. Just devastating.

The fellow bloggers I've met in person can attest the fact that I'm not much for social graces. I'm an introverted homebody who'd rather spend a weekend watching movies and playing old school video games than going out and doing stuff with people. But if my wife said, "We're invited to a party this weekend.. and it's dog-friendly, so Annie can come too," then I'd be much more willing to go. Yeah, I'll admit I'm generally not a big fan of interacting humans, but dogs are more my speed. 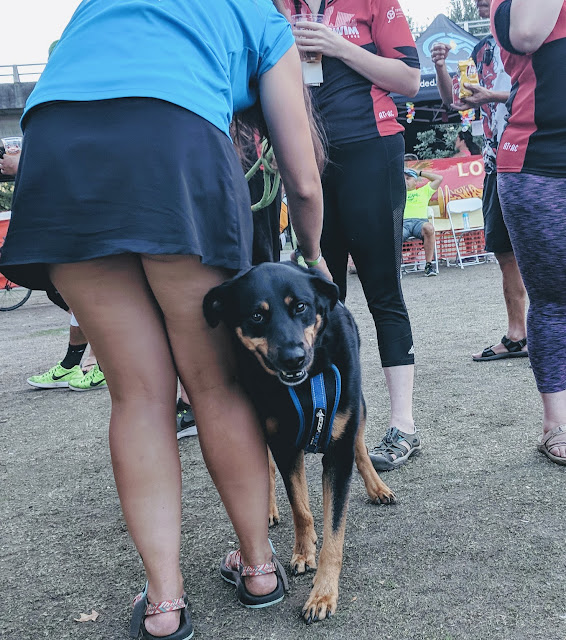 Annie was great at making friends. And always a terrific buffer for awkward me when dealing with people. Hell, an argument could be made that she was my best friend. Loved hanging out with her. Something like going on a hike wouldn't hardly interest me at all, unless Annie was going too, in which case, yes. She was a happy pup and my mission in life was to keep her as happy as she could possibly be, as she was a sweetie who deserved that.

Man, she was so sweet. She had problems with her teeth and had to have several of them removed a couple years ago. To keep her remaining teeth healthy, we needed to brush her teeth on a near-daily basis. At first we used a doggie toothbrush, but it quickly became apparent that using our fingers was more efficient. And while Annie wasn't a big fan of it and could have chomped off our fingers in one bite if she wanted, she was a sweetie and reluctantly let us jam our fingers in her mouth and rub doggie toothpaste around her teeth. I'd often tell her, "I'm sorry, buddy-- I know this sucks, but it'll help keep your chompers working strong for ya when you're an elderly pooch." It's heartbreaking that she never got to that point (Hell, had I known she'd pass away at 7, I wouldn't have bothered with all the teeth-brushing and saved us both the unpleasantness!).

I hope you never had to have a pet make an extended stay at the emergency vet, as not only is it super stressful worrying about them, but it's also very expensive. She was at DoveLewis, Portland's only 24-hour emergency vet, for 5 days. The bill crept past 5 figures. And while we had pet insurance for her (which we got after our pervious dog, the saint Lucy, got cancer and left us far too soon-- and at an expense of several thousand dollars) that should hopefully cover about half of it, that's still a lot of money. Had Annie stuck it out for an extended period of time, we were ready to drain our savings if it meant there was a chance she'd possibly get back to her previous quality of life. I was all ready to give up buying new cards, even starting to think about selling off much of my collection, that's how much she meant to me. But thankfully (?) it didn't come to that and her health took a turn for the worse to where throwing more money at it to keep her zombified for hopefully another few days (and a one-in-a-million shot she'd recover) didn't make sense.

But still it was a lot of money, and so I've been trying to watch my spending. But then a few days after she passed, a card popped up on eBay I had to jump at. I love Topps Retired refractors and I search for them multiple times per day. This particular time I was at a low point and thinking how nice it would be if a Retired refractor I needed popped up at a reasonable price, and the Cardboard Gods showed sympathy for me and this one appeared with a very fair buy-it-now price... 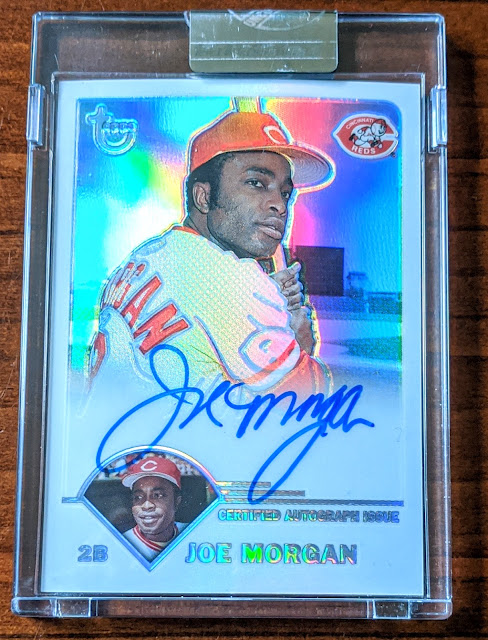 This 2003 Topps Retired Joe Morgan refractor auto will always have special significance to me for being the first card I bought after Annie left us. I don't know if I can link her up to Joe Morgan much other than they're both kind souls who never gave much thought to advanced metrics. I never really collected Joe Morgan much, but always respected him as a player. And I always liked listening to him and Jon Miller back during their ESPN Sunday Night Baseball broadcasts in the 90s and 00s. And yeah, I think this is a beautiful card! 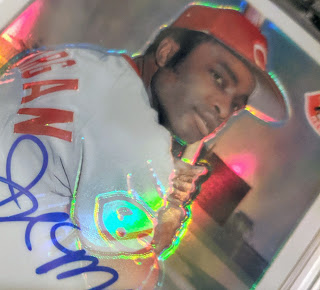 Check out the shoulder. I've seen this happen before. Looks like there was originally a Reds logo that got photoshopped out (why?), though the "holofoil lines" (or whatever you call them) must have been traced before that happened, as they've left a shadow that shows up when the light hits it. Sort of like how Annie is gone, though in a way she's still here with us in our hearts (--yeah yeah, I'm grasping at straws here trying to to link my dead dog to this baseball card I bought, but give me a break-- my dog died.)

A couple people shared this video with me on Twitter in their condolences, and it is pretty great for anyone who finds themselves in this sad situation.


I knew the first time I saw Miss Hailey that this was going to hurt. Because every relationship always does in one fashion or another. Every relationship you have with anyone or anything you love will eventually end in tears.
But it is the deal we make, it is the agreement we accept, and it is the opportunity I would never turn down. You can avoid the pain and tears of losing a loved one....all you have to do is never love. I choose the pain and tears.
But Dr. Seuss was right: "Don't cry because it's over, smile because it happened." 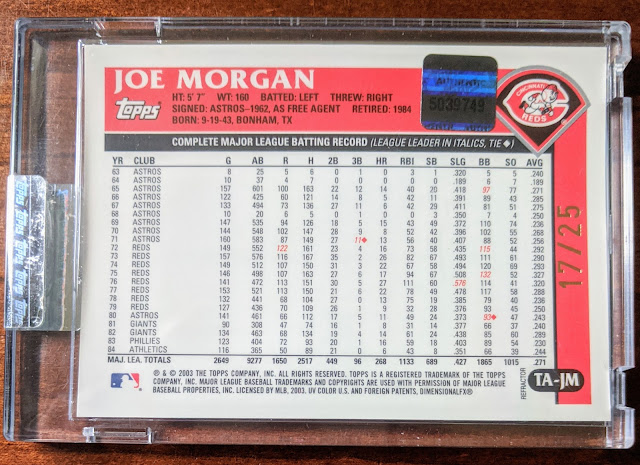 That's a long, productive career. Wish Annie could have stuck around for even half of that timespan. I figured once she hit 10 years old, it'd be time to really spoil her and cherish every day with her, though we never even got that far. That'll haunt me, but I know we still gave her a wonderful life and even if she only made it to 7, I'm sure a lot of other dogs out there would happily trade places with her to get all the treats and fun adventures she got in those few years.

Oh hey, both Joe and Annie were born in September and they both took a lot of walks!

We'll take some time to mourn, but probably next Spring we'll get a new pup. But it's going to be a sad winter here, as my wife and I are still shellshocked over losing our sweet girl. Plus my wife's family cat died last year, so now we've got no cute fuzzy creatures to cuddle. :(

Man, Lucy was the best. It was heartbreaking we got less than 2 years with her before cancer took her down. We really thought our karma would bounce back with the next dog, and while Annie was awesome, her career was cut short, to put it in sports terms. Both Hall of Famers, no doubt, but hopefully dog #3 comes through with longevity to rival the likes of Julio Franco and Bartolo Colon.

I'm a little worried though. Lucy and Annie were both very good girls who didn't chew what they weren't supposed to (--ok, once when Annie was a tiny pupper, she chewed up one of my plastic gloworm toys [guess she loved glow-in-the-dark stuff as much as me], but that's the only time I can think of that she chewed something that wasn't one of her own toys). Bringing a new dog into the house scares me for my card collection. Annie would often curiously sniff my cards, but never chew them. Such a good girl! I could trust her with a Trout rookie and not give it a second thought. I can only hope my next dog rocks at least somewhat close to that level. 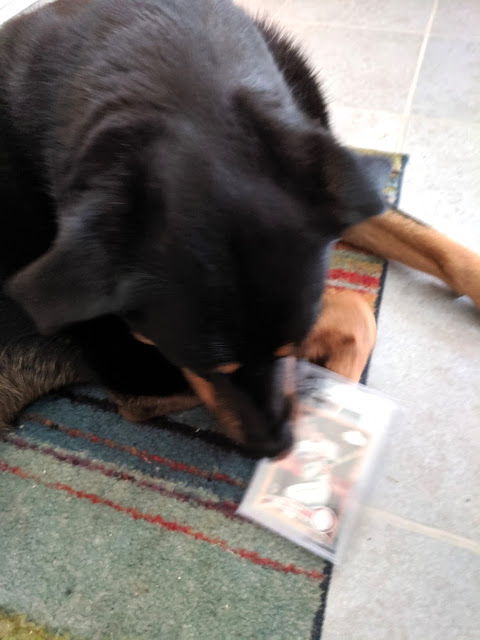 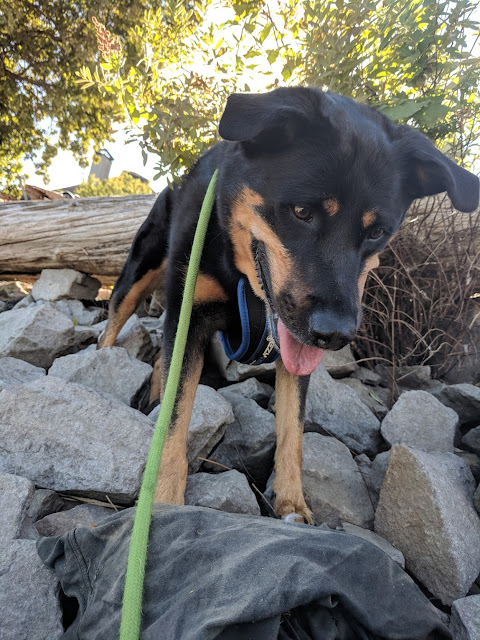 Ok, I think I've now said all I needed to say about my dear departed dog. Thanks for letting me get that out. Regular baseball card content to resume going forward.
Posted by defgav at 12:55 AM