As I like to do each year around this time as the calendar winds down, let's take a look at active professional baseball players named Gavin and how they performed this past season. 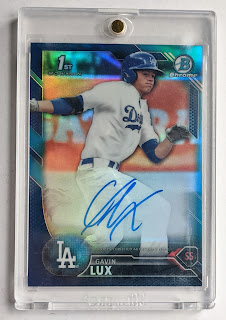 Of course the big news in 2019 as far as Gavins in baseball was Gavin Lux. He tore up the minor leagues and got a September call-up to the Dodgers, becoming just the 3rd Gavin to make his major league debut. As a 21-year old getting his first taste of MLB action, he hit .240 with a pair of tatters in 75 at-bats. Not exactly a Juan Soto-like debut, but he held his own. He also had a big moment with a home run in the NLDS against the Nats, though Los Angeles ultimately went down in dramatic fashion. While I generally root against LA, part of me was hoping Gavin would play in the World Series. Maybe next year. The big question will be if Lux can make the team out of spring training or if he'll start the year in AAA. Or perhaps another team will convince the Dodgers to trade him away for a solid pitcher or two (He was apparently highly sought-after at the trade deadline).

If you're wondering, the first Gavin to play in the postseason was Gavin Floyd, who took the loss in the deciding Game 4 of the 2008 ALDS as the Rays knocked off the White Sox. 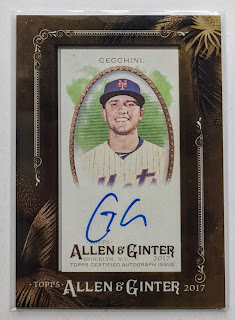 Cecchini is the "middle child" of the 3 Gavins who've made the Majors. He played in 36 games with the Mets in 2016-2017. Then after playing well in the minors in for the first part of 2018, he was lost to an injury on the cusp of being called up again. Looks like he was slow to get back to full strength, and spent all of 2019 in the minors, mostly in AA. On the year, he hit .248 with 3 homers. So yeah, it was a rough year for him. The Mets just recently cut him loose, so he's currently a free agent (and now officially a bust as a former 1st round pick). I hope he can bounce back with a new team in 2020 at age 26 and make it back up top, though it's not looking great at this point. (His older brother Garin Cecchini, who got into a handful of games with the Red Sox in 2014-2015, seems to have retired after most recently playing in Mexico in 2018.)


GAVINS IN THE MINOR LEAGUES

This list seems to get larger every year, as the name Gavin became more popular for baby boys born in the 90s. Less Garys and Georges being born these days, with more Gavins picking up the slack. 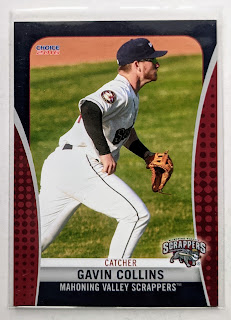 Drafted by the Cleveland Indians in the 13th round of the 2016 Draft from Mississippi State University, the 24-year old Collins spent 2019 at high-A Lynchburg, playing C, 1B, and DH, while batting .262 with 7 homers. Respectable numbers. Hopefully he gets promoted to AA in 2020.

Here's a new name to the list. Collyer was drafted by the Texas Rangers in the 12th round of the 2019 Draft out of high school. His pro career got off to a bumpy start: He came on in relief in 6 rookie league games, totalling just 5 innings-pitched and 6 earned runs given up. But that's a small sample size and the 18-year-old right-hander has plenty of time ahead of him. (Thanks to Zippy for giving me a heads-up that he had Perfect Game cards on the market. I ended up snagging this lot of 3 different parallels on eBay recently.)


Gavin Jones
Another new player this year, Jones was a late draft pick by the A's back in June. He's a corner infielder who didn't show much with the bat during his debut season in rookie league. But he also pitched a perfect inning to finish a game once, so that's cool. 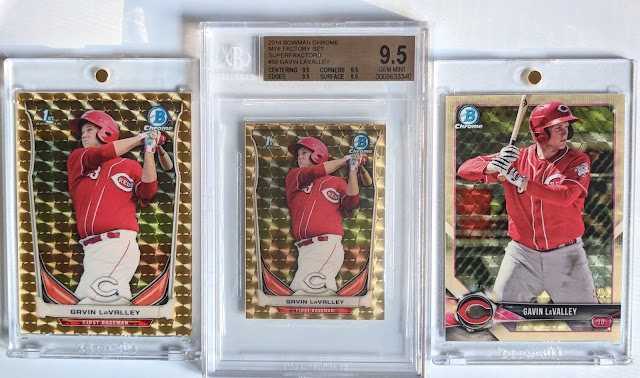 Ah, LaValley, a guy I've supercollected over the past few years. He's now spent two and a half seasons at AA. Hit a middle-of-the-road .254 with 10 dingers in 2019, playing first and third base. He'll be 25 next year and hopefully get a shot at AAA, so it's crunch time for him. 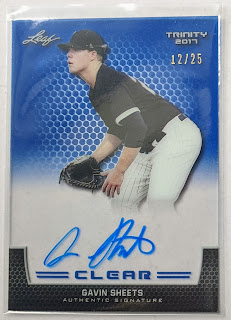 Sheets, a 2nd round pick in 2017, had a solid 2019, with his 16 homers and 83 RBI both easily leading the White Sox AA affiliate. He hit .267 and mostly played at 1B. (I'm sorry I don't really use advanced stats or hunt down scouting reports, but click the name link if you care to dig deeper.) 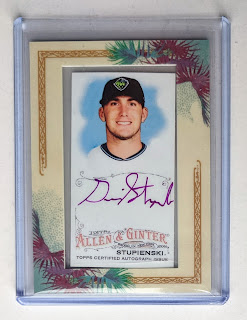 (signed custom)
Stupienski, a former Diamondbacks prospect, hung on for another year, playing for a couple different independent teams in 2019, though the numbers he put up weren't too impressive. Geez, it seems like besides Lux and Sheets, 2019 was generally a rough year for ballplayers named Gavin!


Gavin Wallace
Wallace just turned 24 (yesterday was his birthday), but still hasn't made it out of A-ball. He pitched 109 innings, striking out 90 and walking 22 while giving up 124 hits in the Pittsburgh organization.


---Now for a few guys that have Gavin in their name, though it's not their first name-- 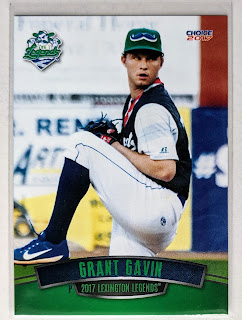 Grant spent all of 2019 in AA. The righty reliever pitched 52.1 innings, striking out 73 and walking 25 while giving up 43 hits. Not bad numbers. It's likely the Royals promote him to AAA next year. 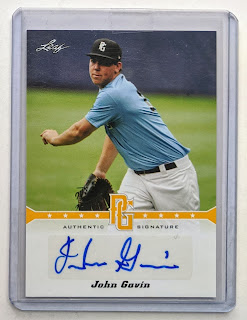 
Stephen Gavin Alemais
I don't think this guy was on my radar before, but I should probably give a little love to him since his middle name is Gavin. I don't think there's been a Gavin middle-namer in the majors since Scott Erickson. Anyways, Stephen was a 3rd round pick by the Pirates in 2016. He's a light-hitting middle infielder who played at AA in 2019.

And a respectful tip of the cap to the only Gavin who appears to have hung up his cleats since last year's update...
Gavin Lavallee
Lavallee (not to be confused with the similarly named Gavin LaValley) didn't play in 2019 after a career in the independent Pecos League from 2016-2018. He hit .299 in 131 career games. Wishing him the best with what the next chapter of his life has in store for him. 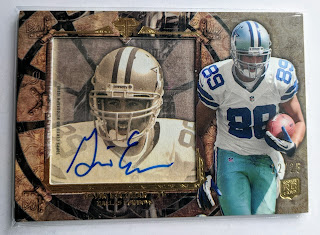 After getting released by the Dolphins in late 2018, Escobar joined the San Diego Fleet of the newly-formed Alliance of American Football for 2019. He caught 14 passes for 142 yards during his time in the AAF before an injury ended his season (shortly followed by the league folding). He's currently a free agent and his prospects of getting back to the NFL are looking dim at this point.


In hockey, Gavin Bayreuther became the first NHL Gavin in several years (following Gavin Morgan in 2003-04). Bayreuther (pronounced "BAY-roo-thuhr") is in the Dallas Stars organization, though he's currently playing for the Texas Stars in the AHL (basically the minor league of hockey). He's got some recent Upper Deck cards out, though I've yet to pick up any. These days, I'm less enthusiastic about collecting cards of guys named Gavin-- especially non-autos and non-baseball guys-- though still happy to receive any cards I need in trade. (I'm especially burnt out on Gavin Floyd, Cecchini, and Escobar unless it's something cool like a 12/25 card.) 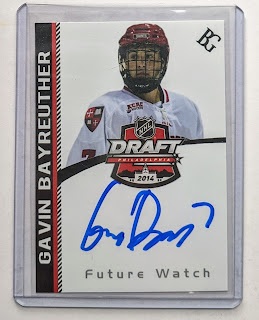 Oh yeah, I forgot I had picked up this signed custom (?) from eBay back during his pre-NHL days.


A bonus Gavin with cards 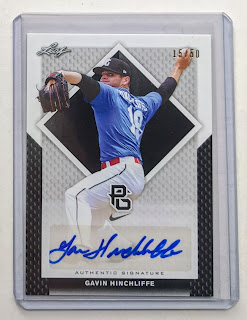 Hinchliffe is still in college, but he has Leaf Perfect Game cards on the market. I generally keep this annual list of mine professionals-only (There are many NCAA Gavins), but I make an exception if an amateur has real trading cards out there. I suppose it'll be a while till we find out if Hinchliffe makes a go of it in the game, though his collegiate performance hasn't been much so far.

Again, best of luck to him and all my other Gavin brethren!

p.s. Oh, and I just now discovered that there's a high schooler named Gavin Casas who has cards in 2019 Panini USA Baseball Stars and Stripes, so I'll probably have to pick up an auto of his soon (despite how unsettling it is collecting cards of someone who is still a minor).
Posted by defgav at 12:51 PM