My first TTM request as a kid

To recap, last month I sent out my first-ever* pair of through-the-mail autograph requests. Both were to guys who graduated from the same high school as me and are currently trying to work their way up to the majors. Brian Humphries gloriously returned the card signed, but the other TTM attempt, to Johnny Omahen, is still at large.

Good news is Omahen was recently named a California League All-Star and was soon thereafter promoted to AA just a few days after I put the request in the mail. Looks like Johnny has had a couple quality starts to kick off his AA career in Mobile so far. Best of luck to him! But now I'm left with the uncertainty of what'll happen to my request (I mean, there's always uncertainty, I know, but even more now). Hopefully my request will find its way to him, or at least get returned to me unsigned so I can try again (I've only got one other Omahen card and don't want to risk sending it. And he doesn't have any cards on eBay right now besides expensive team sets he's included in.)

Oh well, that's part of the excitement of TTMs, I guess.

I also just dropped another request in the mail over the holiday weekend, this one to Gavin Glanz. He's one of the lesser-known Greatest Gavins, and the only active pro baseball Gavin of whom I don't have an autograph (not counting Frendy Gavin, who, after missing all of 2014, is pitching again in the Dominican Summer League). So finger's crossed that one comes back successfully soon. 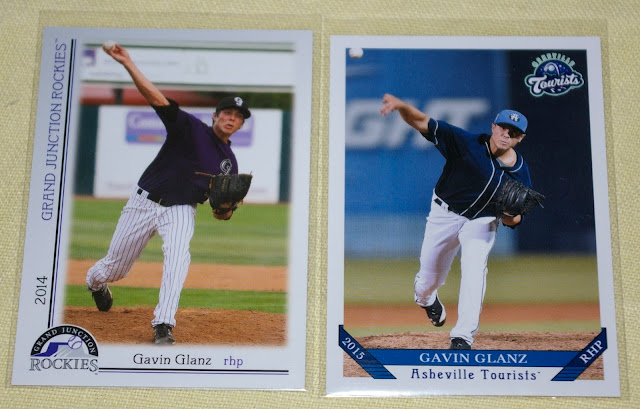 These are two Gavin Glanz cards I recently bought online. I actually got a couple copies of the one on the right (an obvious homage to 1993 Topps) and used the extra for the TTM.

Glanz pitched for the Grand Junction Rockies on Monday night, matching the longest start for the team this season with 6.2 innings, giving up 1 earned run. I'd like to imagine that my TTM request arrived earlier that day and it inspired him to have a good outing! lol

Not really on-topic for this post, but here's another Brian Humphries card I bought from the same seller to combine shipping:

*So while last month was my first attempt at a TTM with baseball cards, I kinda once sent out a TTM autograph request when I was a kid back in the late 80s. Might as well tell that little story here.

There used to be a drawing show on PBS called The Secret City (and I think later changed its name to Draw Squad). I really liked the show and watched it nearly everyday after school. It was a fun program starring "Commander Mark" (Mark Kistler) basically teaching kids to how to draw better, with emphasis on shading and 3D perspective. Commander Mark would show you how to draw silly things like happy pigs and cartoon aliens popping out of UFOs. I'd often try drawing along at home, and while I never stuck with it enough to be all that great, I suppose I can credit that show for encouraging my creativity and to at least have a desire to be a decent artist.


I even got my mom to order some of his Draw Squad VHS tapes for me. Heck, I even got a t-shirt! 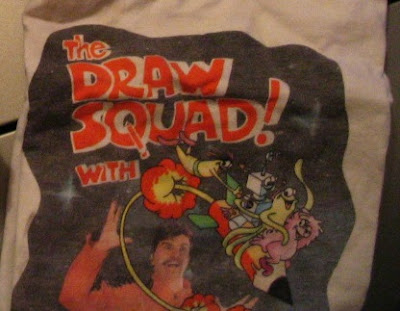 On the show, Commander Mark would sometimes ask viewers to write in and tell him about their drawing progress. So one time, I actually did write him a letter telling him I really liked the show and it was helping me with my drawing and all that. I was hoping he'd write me back and maybe send a signed photo. I honestly can't remember for sure if I explicitly asked him for an autograph, but I think I did..?

I eventually got back a standard "thanks for watching" form letter and on the reverse was an unimpressive b&w photocopy of a signed headshot. Even as a kid I was very aware it was just a facsimile autograph, likely printed off by the hundreds, and not that cool to receive. But hey, it was something. I don't think I bothered to include a SASE, though I can't recall for sure.

As I got older, my local PBS station stopped carrying the show and I got out of it. A year or two passed and one day in 5th grade, Mark Kistler came and gave a presentation at my elementary school. But what sucks is I was unaware and played hooky that day (When I was a kid I was pretty bad about staying home from school at the slightest scratch in the back of my throat as an excuse to play NES in my jammies all day). My friends said it was a dumb assembly that bored them and that I was lucky to have missed it, but I was incredibly jealous and kicking myself hard for skipping school that day. It would have been very cool to see Commander Mark in person, and I probably could have gotten a real autograph from him, too! Damn.

Looks like Mark Kistler is still out there doing his thing and has an active online presence, with markkistler.com and plenty of YouTube videos and stuff. Hey. maybe I should give him another try at a real TTM these nearly 30 years later!
Posted by defgav at 3:53 PM