Here's a new recurring series I'm starting up. It's kinda like Throwback Thursdays or Flashback Fridays, but mine is called Sentimental Sundays. Basically I'll dig up some of my random crap from childhood that I've hung onto (--hopefully something baseball related in there to keep it on-topic for the blog--) and do a little show & tell.

I didn't go to many Padres games when I was growing up in San Diego. I could count the number of games I attended on one hand, in fact. In hindsight, I probably should have gone to more, but hey, major league baseball games are expensive. Plus there's dealing with obnoxious a-holes around you who won't shut up (I suppose I'm not really a "people person"). I tend to prefer the comfort of watching the games on TV at home.

But anyways, recently while digging through boxes of my old crap (searching for that Commander Mark photo from a few posts ago), I came across some ticket stubs of games I went to back in the day. I don't really remember anything specific about them, but thought it'd be fun to look up the game recaps online and see if I witnessed anything worth bragging about. So there's pretty much the inspiration for these Sentimental Sundays posts!

First up is 7/29/90, pictured above. This might have been my first-ever baseball game, but I may have gone to a game or two in the 80s and forgotten it (and don't have the stubs). But I know I didn't really turn into a big baseball geek until 1990, and this is the oldest stub I've been able to dig up. Actually.. hmm, this ticket is intact and ostensibly unused.. not just a stub. Did we go to this game and just end up with an extra ticket? Did I not even go to this game and just end up with this ticket sometime afterwards as a collectable? Honestly, I have no clue. Let's look up the game and see if anything jogs my memory.

Ok, so here we go, July 29, 1990 Padres vs. Astros baseball-reference page. San Diego won it 4-3 thanks to Jack Clark hitting a 2-run homer in the 8th. Bip got a rare start at short, giving Garry Templeton a day off from the field (he would pinch hit for starter Bruce Hurst and strike out). Tony Gwynn had a rare 0-4 afternoon, but was still integral to the win, reaching on a fielder's choice in the 8th, then stealing 2nd before scoring on Clark's home run which proved to be the game-winner. For the Astros, Jim Deshaies pitched well but got the no-decision, and a young catcher named Craig Biggio had 3 hits. Other PC guys of mine playing in the game were Roberto Alomar and Ken Caminiti (still with Houston at the time), with honorable mention to Joe Carter.

Nothing really rings a bell there, but it was a Sunday afternoon game (the kid-friendliest of all ballgames).. and the year I dove headfirst into loving baseball.. so I'm inclined to believe I did in fact attend this game and somehow ended up with an extra, unused ticket. I wanna say we won tickets somewhere... maybe? That might explain having an extra. Maybe a friend flaked? But unless I manage to dig up more proof somewhere, I may never know for sure.

Now let's switch gears and look at some more crap I've held onto from those days. (This is just the tip of the iceberg; I've really got a lot of childhood crap. And that's even after moving away from San Diego a few years ago when I jettisoned a lot of stuff.) 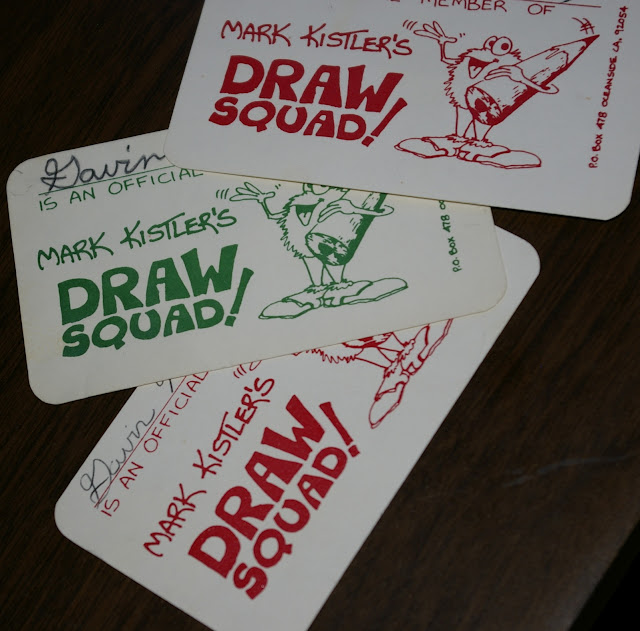 Ah, back to my love for "Commander" Mark Kistler's Draw Squad. Here you see I was a 3-time official member. Heck, I don't think these ever expire, so by all intents and purposes, I'm still an official Draw Squad member. That should be worth something, right? 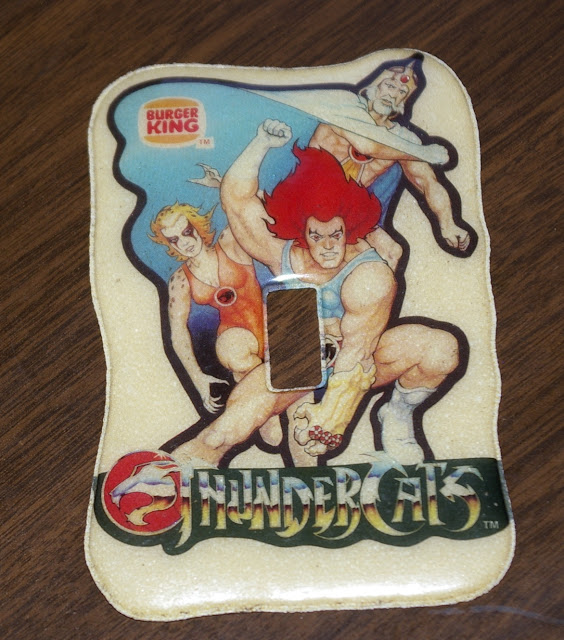 Here's a ThunderCats light switch cover (puffy sticker) that I apparently got in a Burger King kid's meal at some point in the late 80s. I gotta admit that I was never much into ThunderCats. So why did I bother keeping this around? Well... 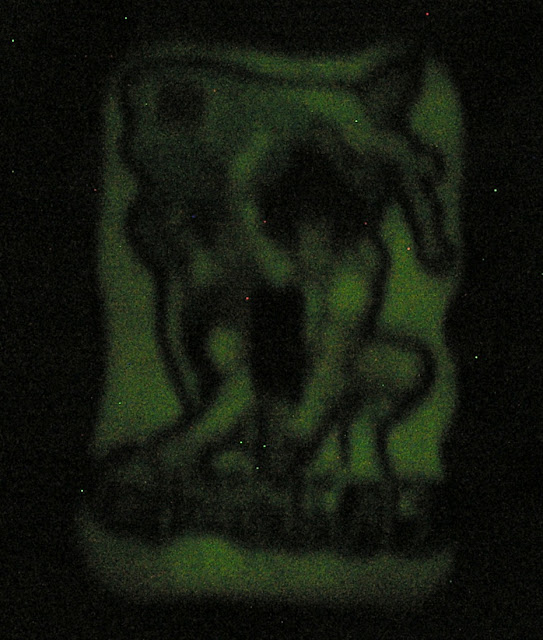 --That bitch glowed in the dark, baby, that's why! My love of glow-in-the-dark stuff goes way back. 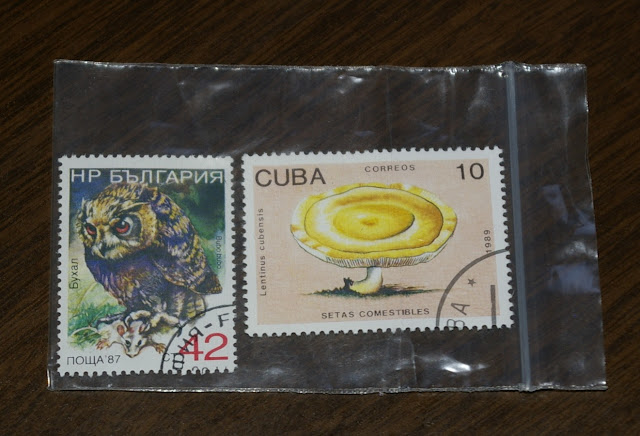 Finally for today, here are a couple stamps. One's from Cuba.. and well, the owl one is from someplace in Europe, I would assume. I never really collected stamps much, but if I got my little hands on some cool ones, my "collecting" gene would often kick in and I'd keep 'em. Serious stamp collectors would be quick to point out that these are worthless because they're canceled. (And even if they weren't, I doubt they'd really be worth anything.) But still sorta neat.

Well, thus concludes the inaugural post in my Sentimental Sundays series. Did you enjoy it or should I scrap this segment? Let me know in the comments. But I'll probably just do what I want to because it's my blog and it's not like I'm getting paid for this, right? haha. TBH, I've already drafted next Sunday's post.

Hey, before we go, let's hash out the Pull-Tab Awareness Week contest.

Seven brave souls stood up for righteousness and met the requirements for entry into the contest:

Let's randomize them up. (NOT picking a winner here).. 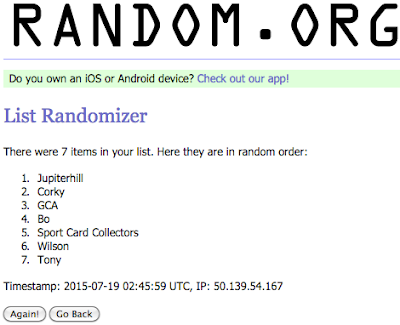 Once again, let's turn to ESPN's Sunday Night Baseball to find us a winner. 7/19, Red Sox at Angels.

Winning number is total runs scored for both teams in the game. After 7, we cycle back (so Jupiterhill = 8, Corky = 9, etc). Good luck, guys!

UPDATE: Wow, what are the odds? Southern California gets rained out in July. First time Angels get rained out at home since '95! The contest game bumps to 7/20.

I've got to say I think this was the best Pull-Tab Awareness Week yet! It accomplished the goal of stirring dialog between collectors about card packaging techniques that both keep cards safe in transit, and are also end-user friendly as far as extraction that's safe and easy.

I heard some "extremists" saying that scotch tape has no place on top-loaders, tabs or no, and that only blue tape and/or team bags should ever be used. And sure, in a perfect world, this may be true. But the reality is, most card sellers are going to be resistant to paying a few extra cents per sale for that. So in the interest of "baby steps", encouraging tabs with scotch tape makes the most sense. It literally costs nothing other than one second of time to fold over a piece of tape to make a pull tab.

A big thank you to everybody who helped spread the word! Keep on making pull-tabs!
Posted by defgav at 12:21 PM