End of an era! The home printer I've used for pretty much every custom card I've ever printed out recently died. I had been planning on getting a new printer later this year anyways, so I wasn't too upset by the situation. That old Canon served me well, but had been more and more streaky over the years.

Anyways, here are the final customs printed out on its last gasps. 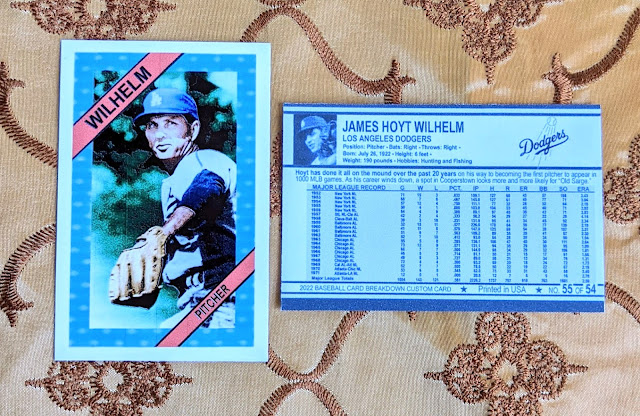 Posting this now specifically because Hoyt Wilhelm was born 100 years ago today, and I wanted to do my little part to celebrate. Hoyt! Hoyt! Hoyt! The design is 1972 Kellogg's. There aren't a lot of Dodgers photos of Wilhelm available, so I colorized a b&w one in an attempt at freshness. It printed out a little weird-- trying to print a third copy of this was the printer's death blow--  so I'll likely try again once I've got the new printer up and running and hope for improved results. But still happy with this oddball-adjacent entry to my Hoyt PC. 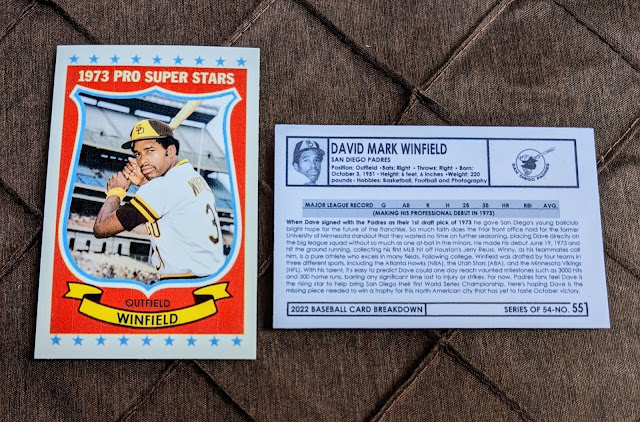 A couple weeks before the Hoyt, I made this 1973 Kellogg's Dave Winfield. Like with the Hoyt, these are "cards that could have been", technically, both having played during those seasons. Not too far fetched that Kellogg's might've beat Topps to the punch by including Winfield in their '73 set, though his debut was June 19, 1973. But like if they came out with a little Kellogg's Update set later that year, this card would have been a great fit. LOL.

Both the card backs were more time-consuming than ideal-- Hoyt with all those stats, Dave with the big write-up-- but I have a hard time leaving my custom backs too "unfinished" or they bug me.

Thanks again to my old Canon printer for the years of service, the frustrating son of a bitch that it was. I'm staying away from Canon for a while, giving HP a shot now. Hopefully it works out well and I come up with plenty more customs to show off on the blog and share with my trader buddies for years to come.