A twice-mailed package plus a few PWEs

Here are a couple incoming trades I didn't have a chance to get to in my previous post of incoming cards last week.

This first trade is a doozy with GCA. I sacrificed a nice auto of a PC guy to make solid progress with some vintage Topps sets. I was amped for the cards to arrive, but the waiting dragged on and on and turns out the cards got sent to my old address. Apparently Greg and I hadn't traded in a couple years and though I gave him my new address, I didn't stress that it had changed since we last swapped cards. But he was apologetic and was kind enough to score and send a couple bonus cards from my "'wishful thinking' desperate double dozen wantlist" to atone for the mistake. It all worked out in the end with the initial mailing getting returned to sender a couple weeks later. After a little more messing around by the Post Office, the re-mailing of the package and the bonus PWE that had been sent in the meantime both finally arrived in my mailbox on the same day. 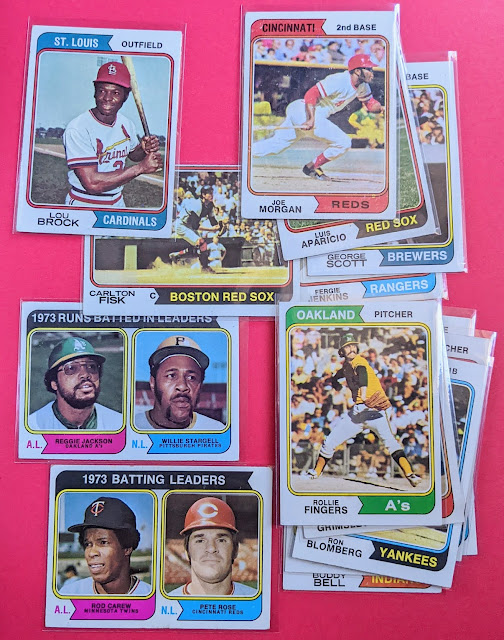 Lots of big names for my 1974 Topps setbuild. 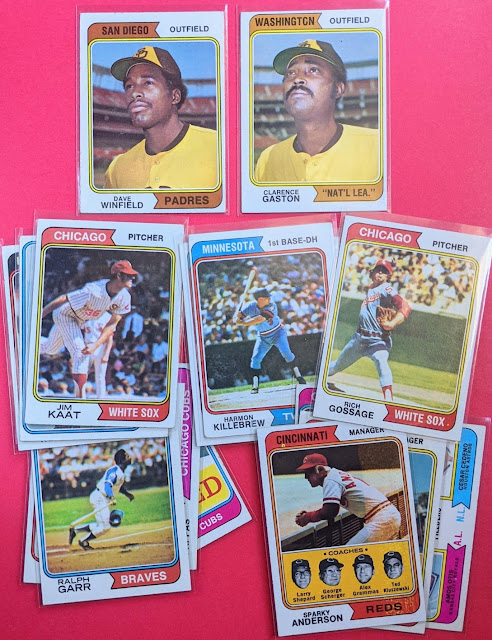 ..and a few more, highlighted by a pair of similar-photo Padres.
After this terrific lot of needs and upgrades, I find myself down to just 4 cards (not counting variations) to complete '74: 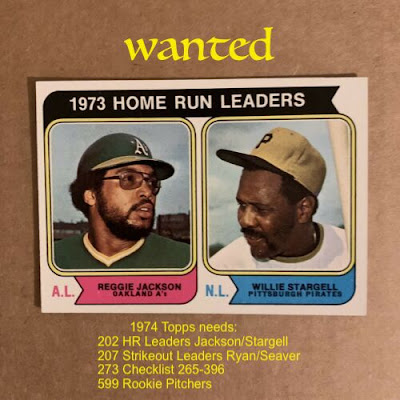 I'd like to eventually round up all the variations, with a dozen still remaining-- mostly "Washington" Padres-- but if I could at least complete a basic one-of-every-number set here soon, I'd feel a nice sense of accomplishment. So yeah, I will probably be looking to purchase those last 4 cards soon, but if you have any and want to swing a heroic little trade, please drop me a line. 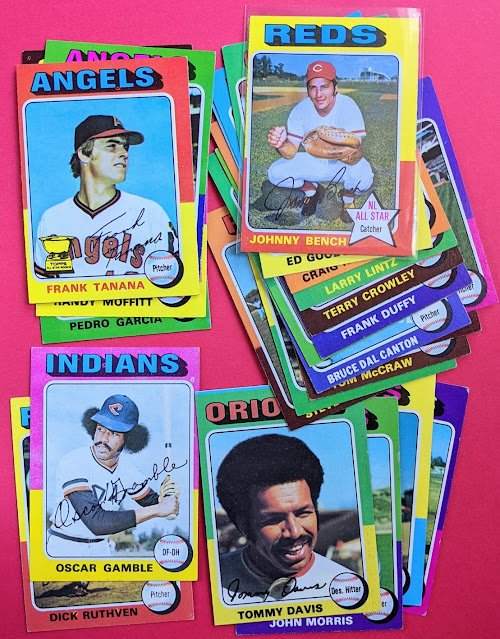 Also got a nice stack of '75s in the package. Chugging along with this setbuild, down to 90 cards remaining. 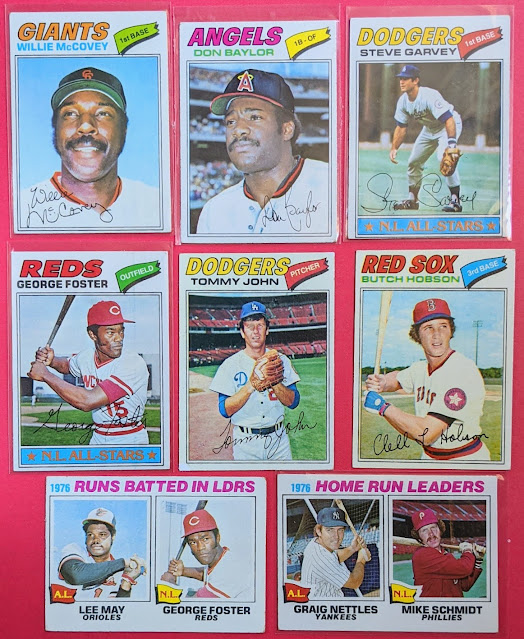 Pretty good star power on these few '77s. A long way to go with this one, but nearly to 40% complete with my birth-year set now. 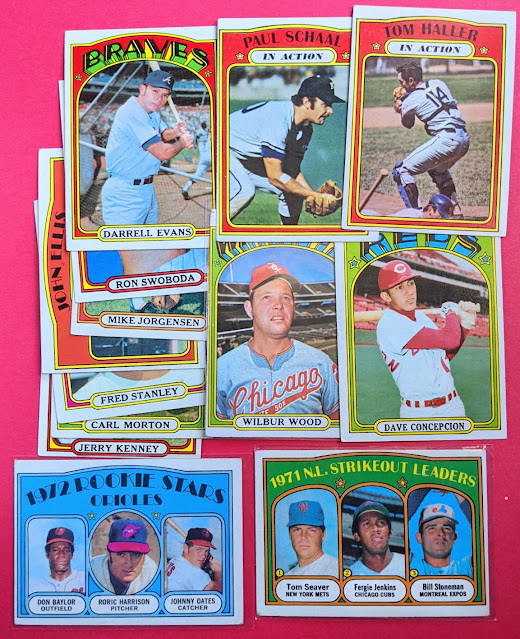 Here's what I was most excited about.. 1972 Topps! I'm not gonna force it-- e.g., empty my bank account on over-priced high numbers-- but I'm still clinging to my goal of completing this set during its 50th anniversary. Great selection of needs and upgrades here. At 165 cards left to go, I'm gonna need to average picking up a need per day to hit my goal (170 days are remaining in this year). But yeah, if I want to have a chance here, I'm gonna need to increase my deal-searching/purchases and hit TCDB hard for trades. More tasks for the ol' mental to-do list that's constantly overflowing with items that need doing. (Eh, at least a basic '74 set should be easily reachable this year.)
And as far as the "bonus for messing it up in the first place" (Greg's words)... 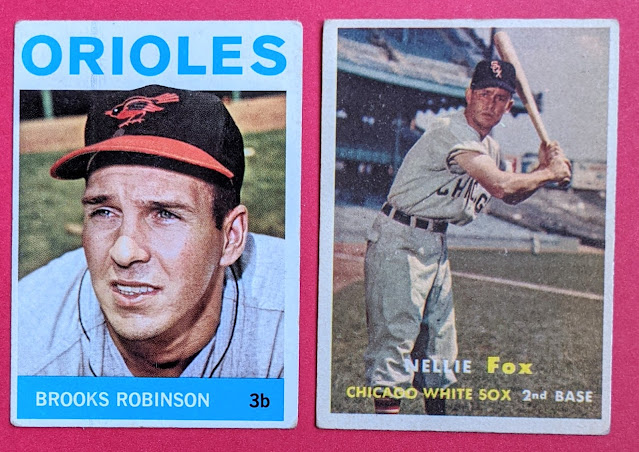 Nice! A couple big ones for my oldest setbuilds. Seems like it was back in the early days of this blog when I formally announced my intentions to complete a set of 1957 Topps... and not long after that, to complete a set of 1964 Topps. They've been kinda crawling along on the backburner for the past several years, but that old tortoise keeps moving closer and closer to the finish line. After checking off the great Brooks Robinson, I've got 137 cards remaining with 1964 (76.74% complete), while HOFer Nellie Fox lifts me just over 80% complete with '57 (81 cards remaining). 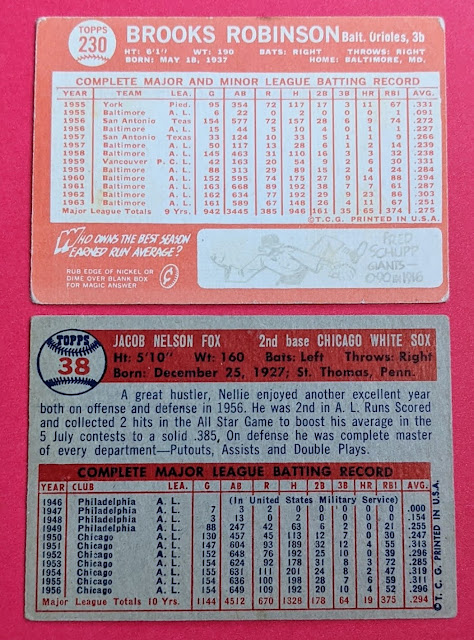 Here's the backs. These are perfect for my sets, condition-wise, in that they look pretty good but not sharp enough to attract the slabbing bros.
Thanks again, GCA! It wasn't the smoothest of our several trades over the years, but a memorable one, no doubt!
-o-
Bo and I did another PWE swap recently. Actually, I got the better of the deal quantity-wise, with Bo mailing dual PWEs. 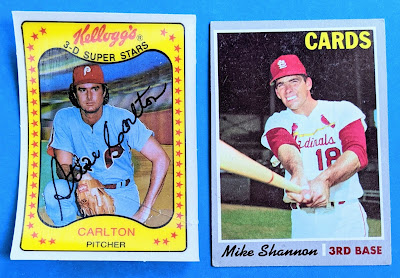 A couple setbuild chips here, with a 1981 Kellogg's Steve Carlton and a 1970 Topps semi-high number. I'm still not to the halfway point with the old grey set, but one of these days. 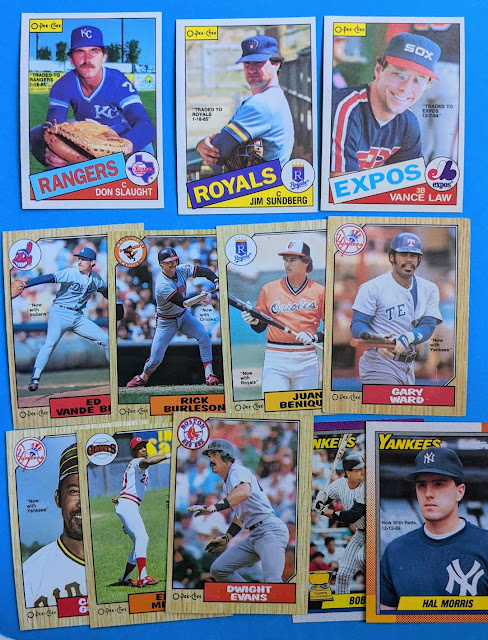 Lots of team dissonance and update text in this batch of OPC... Love it! 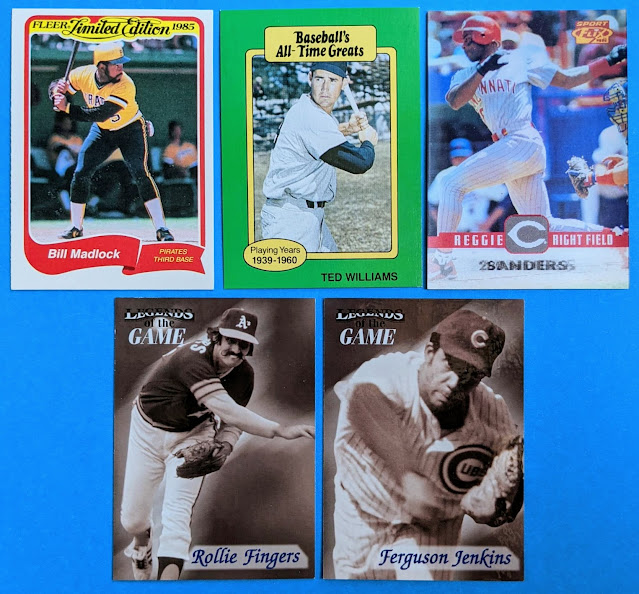 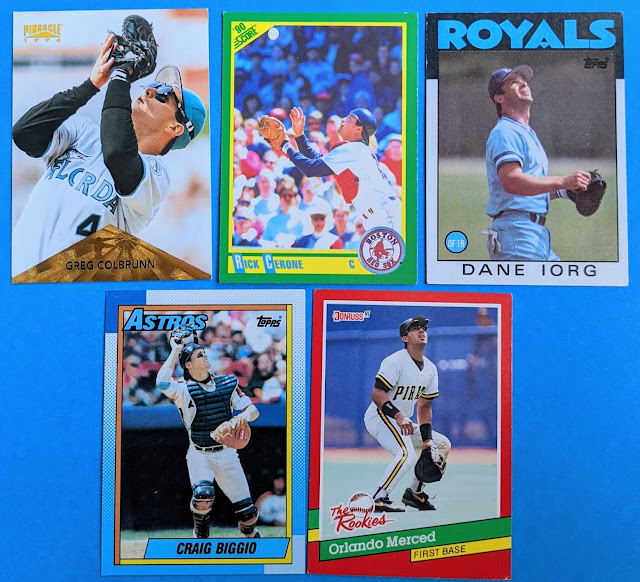 I was hoping to put together a page or two of players looking straight up-- my "Dan Walters Memorial Binder"-- and Bo has been my top source for that project.

Thanks as always, Bo! I'm sure we'll be exchanging cards again before long.

Ok, one more for today.. Here's a surprise buzzer beater from John Miller that just arrived. 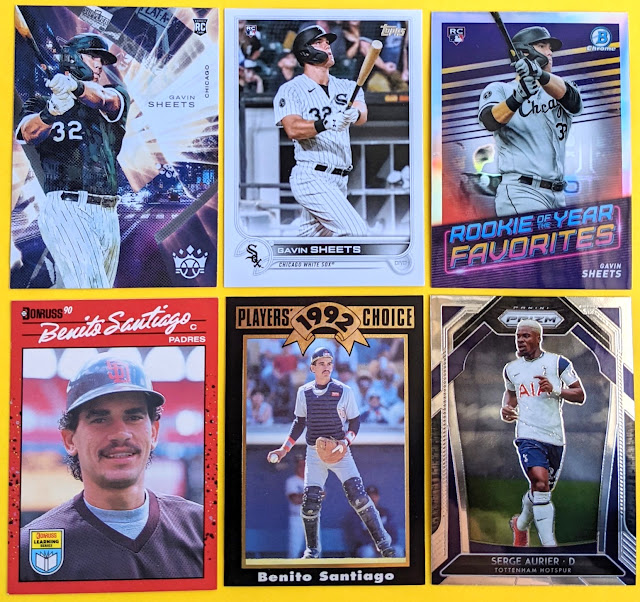 Three Gavin Sheets RCs, a couple Benito oddballs, and a soccer player with whom I share a birthday. Nice! Thanks, John! I'll round up a return for you shortly. 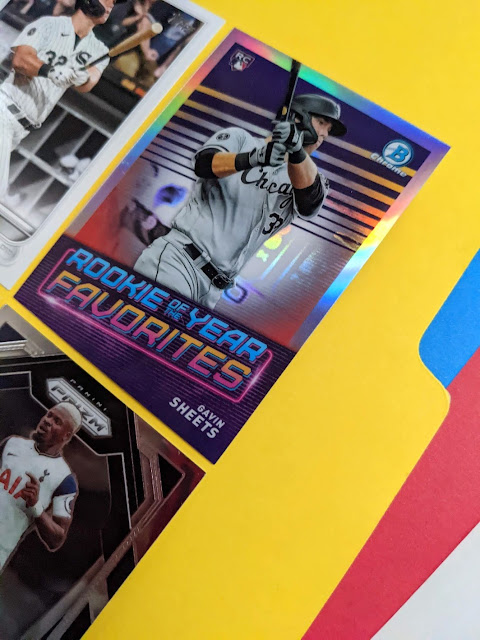 Here's a closer look at the Gavin refractor (as well as the different color file folders that I use to help myself keep track of which cards are from whom). And speaking of refraction appreciation, as of publishing this post, the winning number from the contest in my previous post hasn't been guessed yet so if you haven't guessed yet, feel free to click the "Older Post" link which you may see below and go pick a number if you haven't yet and have any interest in picking a few cards from my prize pool-- which I've yet to restock with some fresh cards but dang it this week has been rough and I haven't gotten to that yet, but I'll be sure to do that before I ask the next winner to make their picks.