A little follow-up to my big Chicago vacation post from last week.

Unforgivably, I neglected to mention pizza in that post, and for that I apologize. The first time we had pizza in the city was Saturday night when the family (not exactly sure who, but they did not get a consensus) ordered some thin, unpleasant tasting garbage for the group which I choked down but did not enjoy. Some of our party seemed to really like it, but my wife and I agreed under our breath that it was terrible. But not to worry... 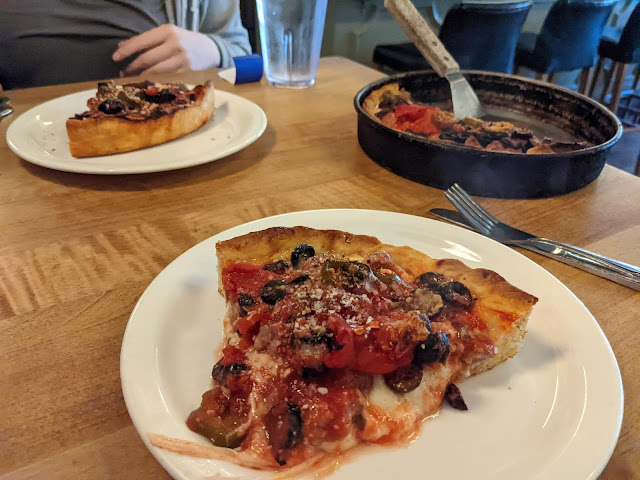 Thankfully we were able to stop at a popular pizza joint (Lou Malnati's Pizzeria) for lunch while killing time before heading to the airport on Monday, so I'm happy to report we were able to experience "authentic Chicago deep-dish" before leaving town. It was very good, and helped us overcome the trauma of the nasty cardboard pizza from a couple days earlier. (For the record, my current favorite pizza would probably be Sparky's here in Portland.)
Despite Saturday's despicable dinner debacle, it was a good day overall. My wife and I celebrated 8 years of reasonably harmonious matrimony. The cardboard gods smiled upon our union and gave me an anniversary present that morning as I checked eBay and was greeted with a Retired refractor I needed at a solid buy-it-now price that I jumped on right away. 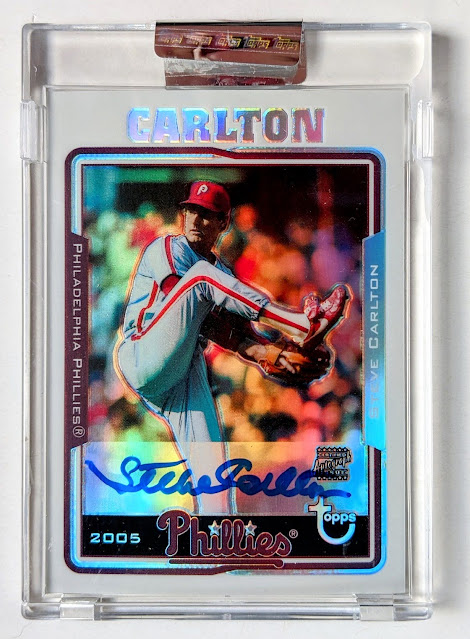 I've had the base version of this Steve Carlton autograph for a while, but was hoping a refractor parallel would pop up at a realistic price for me one day. That's exactly how it went down and the card arrived soon after I returned home. Despite buying the card while in Illinois, still got away with no sales tax thanks to being an Oregon resident.
2005 is Lefty's only Topps Retired appearance, as he wasn't included in the '03 or '04 sets for whatever reason. 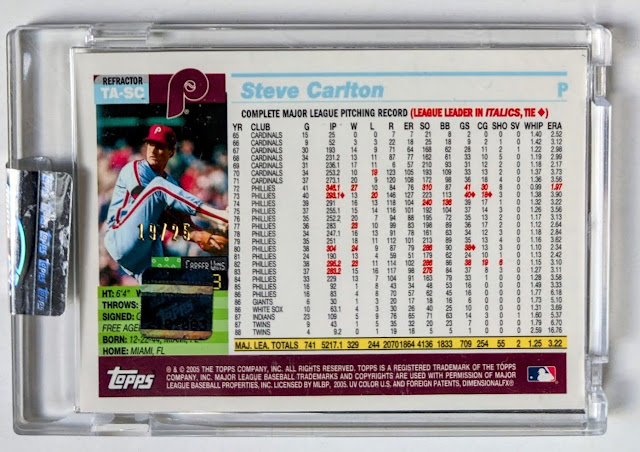 No doubt among the top pitchers of the era, as evidenced by all the red stats on the back. His numbers slipped in the last few years of his career, but hard to blame the guy for wanting to keep playing the game he loved, even with his days at the top of the rotation behind him. 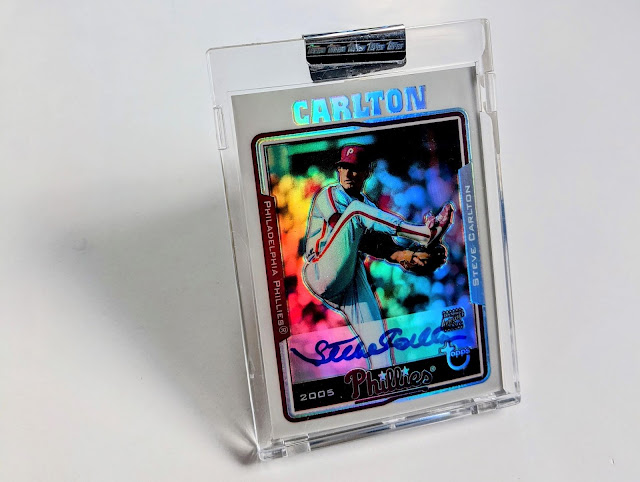 One more look at it. Beautiful card, right?! I can never get enough of those Topps Retired refractors.
So yeah, between this Steve Carlton auto and the Katey Sagal I showed off before, it's cool that I've got some memories of that Chicago trip woven into my card collection.

Onto the contest time. You couldn't have scripted it better, but Dimebox Nick ended up guessing the winning number-- after I nearly met up with him on the trip in question-- while the good ol' trader bud of mine that I know best as "Sport Card Collectors" (Matt) scored the bonus prize. 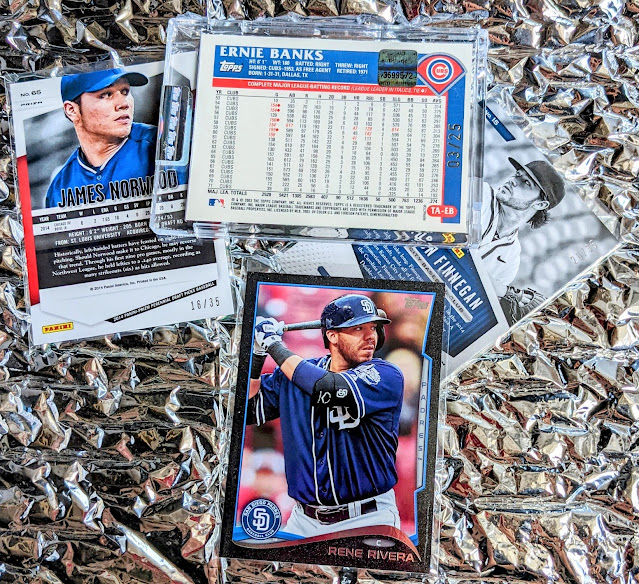 After a couple days without a winner, I was beginning to worry the lucky numbers would go unpicked, but then Matt picked 20 (which was the "bonus prize" number, the unpicked number from the previous contest [Finnegan]) and then Nick hit the grand prize with his guess of Ernie Banks being the 3rd card of the print run. Congrats, fellas! PWEs forthcoming.

This week's mystery card is the 2014 Rene Rivera black parallel numbered out of 63. I'll help narrow down the winning number by giving you the hint that it's an age you might expect a ballplayer to be (so, not over 50, etc). First comment below to guess that number (and follow basic rules of these earlier contests) will get to pick 4 cards from the prize pool... which is currently a bit outdated in the wake of Nick and Matt's selections, but I will be replenishing very soon. (Wanted to have that done by now, but Friday turned out to be a busy work day and so I'll have to bump restocking the pool till the weekend.) Maybe if you wanna fill out your comment more, tell me your favorite pizza place/toppings. I'm pretty easy to please as far as toppings, though I like to add jalapenos when possible.

Thanks for joining me for another round of refraction appreciation!