There was a time when I used the blog to document most new cards I added to my collection. But these days plenty of eBay wins and Sportlots orders quietly get filed away without a public mention. TCDB trades sometimes get blogged about, though not a priority. But cards from fellow bloggers, especially contest/giveaway wins, deserve a tip of the cap on the blog. So let's go! 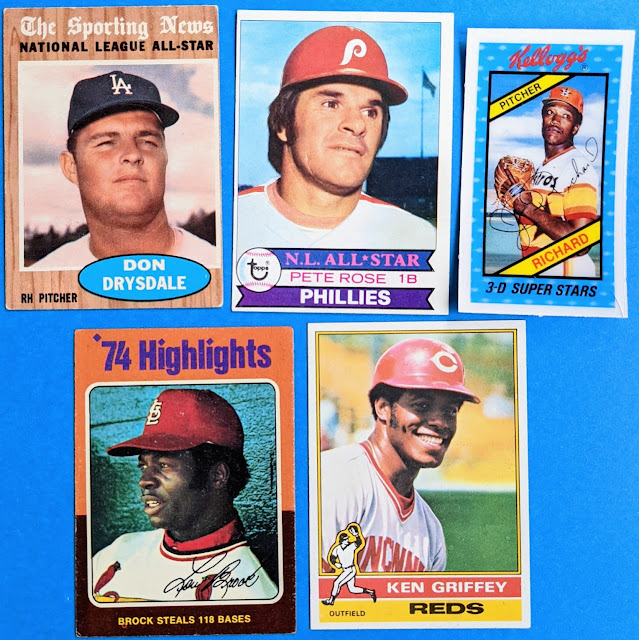 First up are highlights from the big 'repack' I was lucky to score in Night Owl's recent 5000 Post Celebration/ 5000 Card Giveaway. Like with store-bought repacks, it's often the older cards that stand out as special. Some good names here, with the Drysdale especially getting my attention. 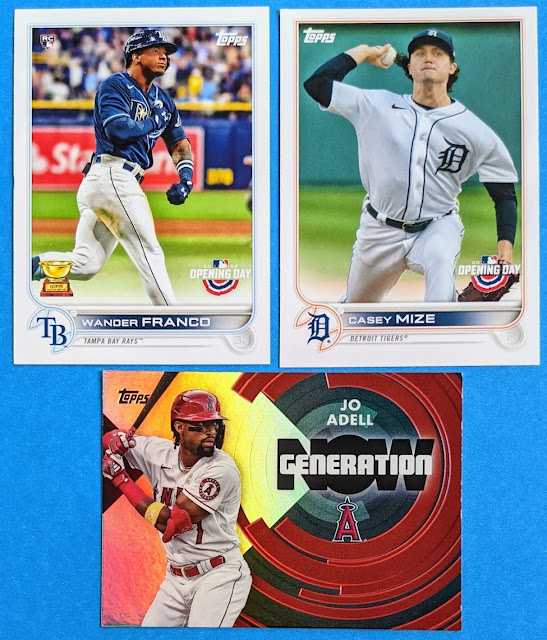 I used to try to keep up with the hot prospects in baseball, but have pretty much gotten off that train here in the covid era. These 3 young dudes above have seen their hobby interest fluctuate a lot over the past few years and who's got the time to keep up with all that? Not that I was ever a big "prospector", but am even less so now. But still, coming across stuff like the Wander Franco Opening Day RC was a thrill. 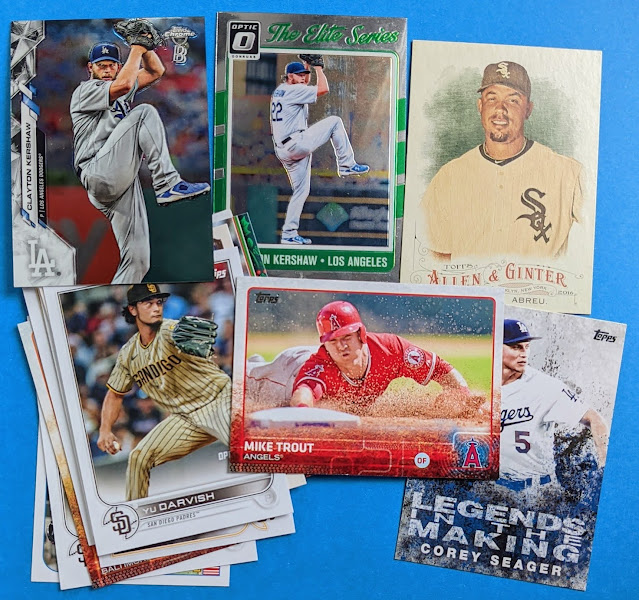 Some more active ballplayers I collect, including what I believe is my first card from that Ben Baller set. 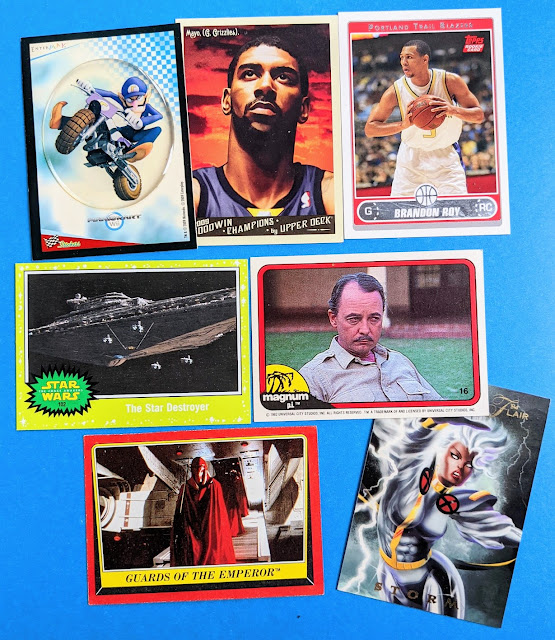 Greg included a smattering of non-baseball, which I'm all for. Some miscellany highlights here. Wonder what the PSA pop report is on that Higgins? lol 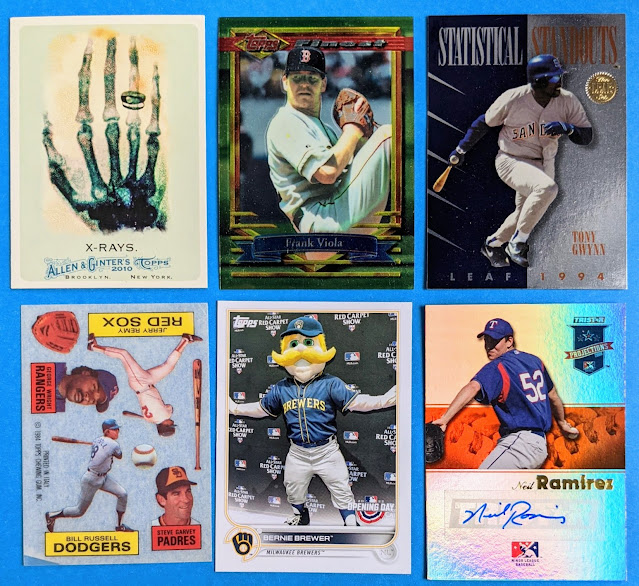 Hey, it was one of those repacks with a hit! I wasn't familiar with Neil Ramirez, but looks like he had a respectable MLB career, pitching in 185 games during the twenty-teens.
Overall, after a fast & loose sorting of the repack, the "keepers" stack was significantly bigger than the "for trade" stack, which is what you hope for when opening a repack.
Big thanks, Night Owl! I say it a lot, but our little community here on the Cardsphere, as I like to call it, is incredibly fortunate to have a professional writer consistently cranking out quality posts. Here's to another 5000+!
-o-
I admit I've been a little shameless trying to rustle up 1972 Topps trades through the blog, hitting that set hard this year, but it's turned out that my readers aren't exactly sitting on a trove of '72 high numbers itching to send out to whoever calls dibs. But I have better luck when I take initiative and propose a trade, which is what I did after reading a new post on the semi-dormant Starting Nine blog. Max and I are both similarly deep into the set, and were able to help each other out, swapping PWEs of our dupes. 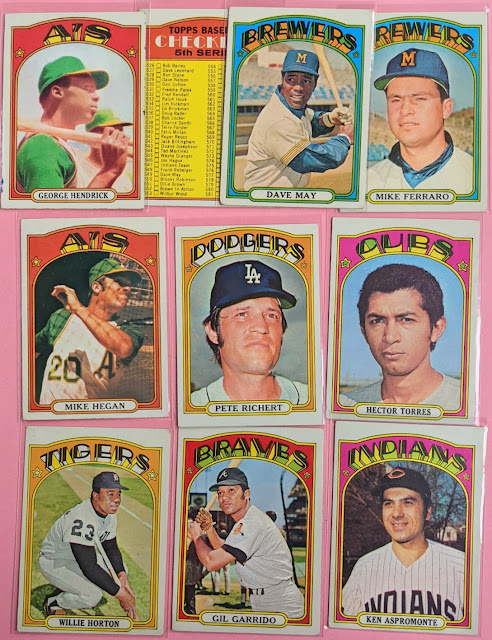 These are mostly from the later serieses and in great shape apart from the pen marks on the edges of the George Hendrick RC, which Max had offered to toss in as a filler card but chances are it doesn't end up getting upgraded any time soon and that's fine with me. I'm in "any port in a storm" mode with the set and will accept any condition so long as that's factored into the expected return.
I've got 167 cards left to go-- with a handful of those currently "out for delivery" courtesy of GCA which we might see by the end of this post or maybe another future post.
Thanks for the trade, Max! (Our first since 2014, back when PWEs flowed like wine.. Hopefully it doesn't take another 8 years for our next exchange!)
-o-
My Portland neighbor Kerry from Cards on Cards is one of the few trader buds who hasn't let the calendar get too far between swaps over the years. I don't have much left in the way of cards he needs at this point since I haven't been breaking new product or going to card shows, but I'm always happy to see mail arrive from him (or our quick in-person exchanges back when we were both in downtown every weekday) and always do my best to scrape together a respectable return for him.

Love the Juan Soto cards. I kinda hope he resigns with the Nats-- gotta love one-franchise guys-- but chances are he lands a monster free agent contact elsewhere. 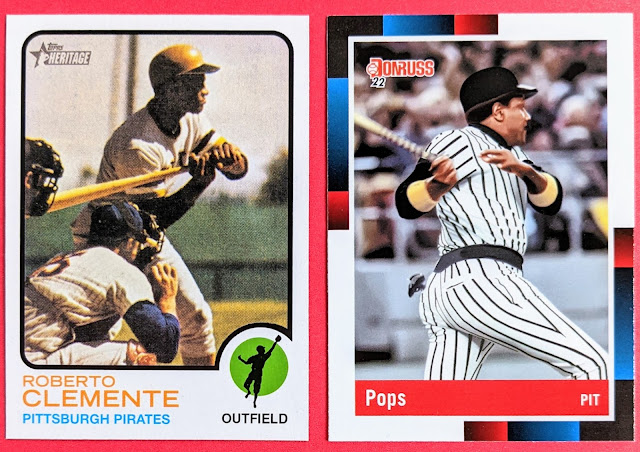 Speaking of one-franchise guys, Pittsburgh was blessed with these guys in their lineup for the entirety of their major league careers. The Heritage reprint is a card I've wanted to add to the PC (former Desperate Double Dozen want), though it's an odd choice by Topps and they probably would have been better off with a tribute more like what When Topps Had Balls came up with rather than a straight reprint thrown into the base set. (Or could have been nice if they dug up the original photo negative and made a higher-resolution version of the card with today's improved photo processing to give an updated look to the iconic card. Hell, that'd make a great insert idea for Archives, putting out clearer reprints of classic-yet-grainy cards. I mean, if they're gonna be doing reprints anyway.) 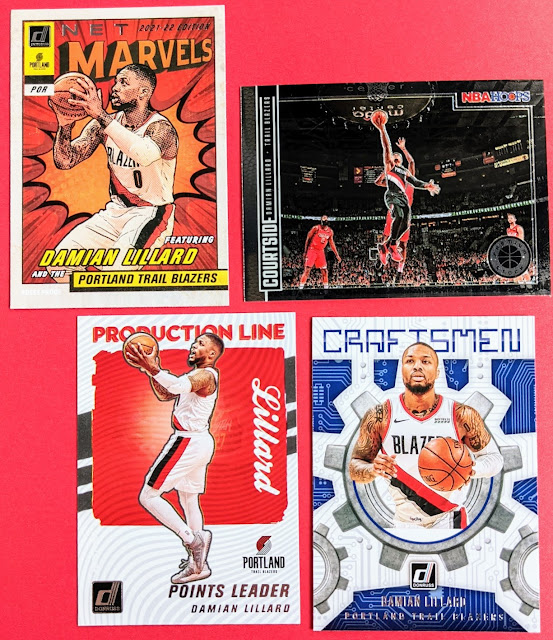 I've got a decent Damian Lillard PC and virtually all of it is comprised of Kerry's castoffs. Good stuff here, with the comic book cover and wide action shot standing out.

Ok, I think that's all I can get to today, but I'll be back before long with some cards from Bo, plus the just-(re)delivered GCA stuff that has a bit of a backstory to go with it. (Another Refractor Friday post due as well.) Thanks for stopping by.