This card had a cameo in my previous post, so figured I might as well make it the featured refractor this week. 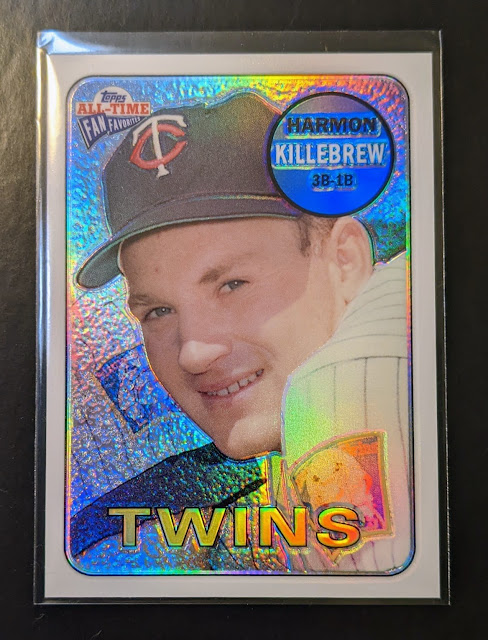 This 2004 Topps All-Time Fan Favorites refractor features a young Harmon Killebrew on a 1969 Topps design. That happens to be the year he won AL MVP, no coincidence. Looks like this picture is a tight crop of a larger photo with at least one other Twin, as we can see a teammate's shoulder behind Harmon, though it's got the "bumpy" effect over it, as is typical for ATFF and Heritage backgrounds when Topps gives them the Chrome treatment. 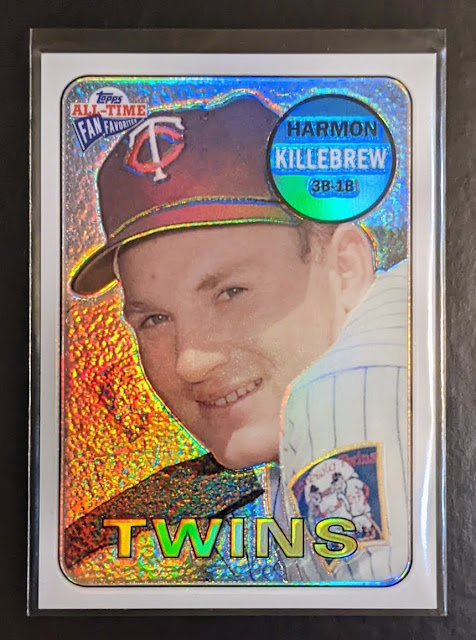 Here's an alternate shot, giving you a better view of the patch on Harmon's shoulder. Maybe someone would be able to pinpoint the year of the original photograph with these clues?
But yeah, it's a lovely card of a great player, and genuinely good dude by all accounts. A fun fact about him is he guested on an episode of Step By Step in the 90s. TGIF, in deed! If that's after your time, well, he also made an appearance on Mr. Belvedere in the 80s. 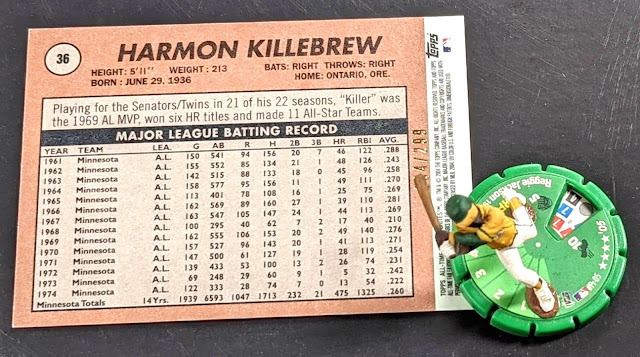 Only his years in Minnesota are included on the back, leaving off his early years as a Washington Senator and sunset season in Kansas City, stripping him of 500 Home Run Club status as result.
Rival AL slugger Reggie.Jackson is partially obscuring the serial number in this above photo, but if you want to leave a comment below with what number you think it is, you might win a PWE. I'll give you the additional hint that the winning number is less than Harmon's listed weight.

The hope for these little weekly summertime contests is to get to 9 winners, since we're celebrating 9 years of Baseball Card Breakdown, and so far we're 3-for-5. But I think I've come up with a good solution.. After week 9, I'll basically do like a "card draft" with the folks who entered the most often without winning where they can make a list of their preferences from the prize pool, and I'll just put together well-weighted PWEs for those folks. So like, if we have 5 contest winners after the 9 weeks, then the 4 people who entered most without winning would be eligible for the draft. Sound good?

Alright, thanks for taking a moment out of your day for refraction appreciation. Enjoy your weekend, guys. How's the weather where you are? Here in Portland looks like it'll be the last nice weekend before entering the hellscape that seems to bake the city every year around the last week of July and/or the first week of August. Not looking forward to that!