When I was a kid collecting in the early 90s, my local card shop had a decent price on 1982 Topps wax packs. I bought a pack or two now and then, and over the span of a year or two, compiled probably over half the set, scoring some great cards including RC's of Cal Ripken, Lee Smith, and Dave Stewart, and late-career cards of legends like Yaz, Bench, and Stargell. They were the closest thing to "vintage" packs I ever had a chance to rip, and I loved it. 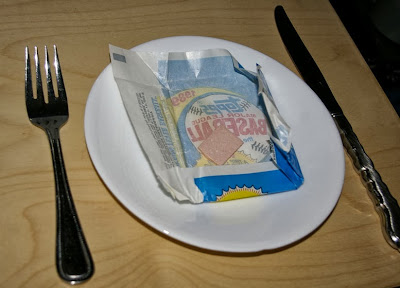 And of course, back in the good old days, every pack of Topps included a piece of gum. I know a lot of people warn you to stay away from the old gum in baseball card packs, saying it's got dangerous bacteria or organisms or cooties or whatever that have been hanging out and multiplying over the years... but I'll admit it, I ate the gum.

And I say "ate" not "chewed" because-- as you know if you've tried it-- it's crunchy at first but quickly melts away in your mouth till after a moment you're left with a wad of gum about the size of a piece of rice. It's got a weird, but not unpleasant taste. So yeah, it doesn't exactly improve with age like a fine wine. But in all time times I ate decade-old gum, I never once felt any discomfort or any ill effects from it.

A few weeks ago, View From the Skybox sent me my cards from his recent group break along with a bunch of bonus cards. Also included was an unopened pack of 1989 Topps. No GEM MINT 10 Randy Johnson rookie or other notable cards to be found when I ripped 'er open, sad to say.. but yep, there was an old piece of gum. 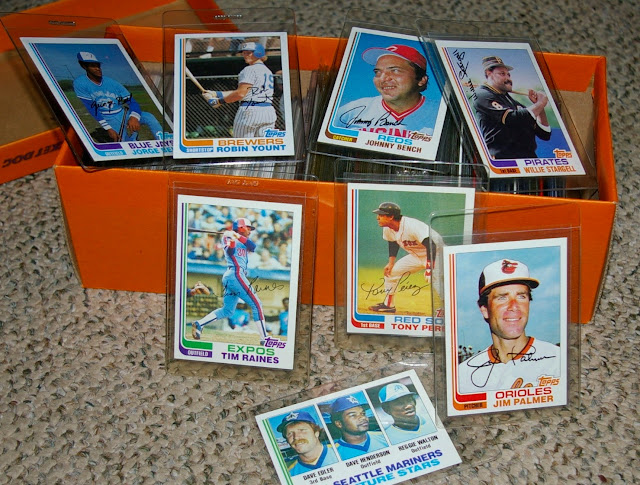 It's just one of those mind tricks that come with getting old, I guess.

So you see where I'm going with this. Without giving it too much thought, I ate the gum. Well, actually, the gum had arrived broken in half. I ate a half and saved a half.. unsure if I would eat it too. Despite how it seemed in my head, that 24-year-old gum was obviously much older than the 10-year-old gum from in my youth. At 24, the gum could vote and fight for its country. But it couldn't rent a car, at least not without an added "under-25" fee, so I feel good about that.

After making it through with no stomach irritation, I ate the 2nd half a few days later (after getting the idea for this post and taking the cheesy photo up top). I'm still here.. feeling fine.. maybe a few extra bacteria cooties crawling around in my guts, but whatever. It's a guilty pleasure, sure, but now the experience and distinct taste and texture really takes me back to the early 90s, chomping '82 gum. Ah, nostalgia. 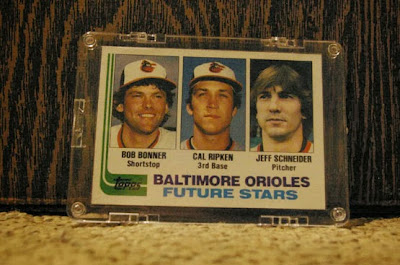 Now that I think about it, I bought a few 1984 Topps packs on eBay back around 2008 (I had the hankerin' to open some old wax, and I never had much '84 Topps), and I'm pretty sure I ate the gum then too.. at least one piece. That would also have been 24-year-old gum at the time. But I have a limit, I think. For example, if I was ever somehow fortunate enough to wind up with (or pay a large amount for) a pre-80s unopened pack of cards to rip.. I would definitely have to think long and hard about eating the gum. And anything from the 50s or 60s-- forget it. I guess my cutoff would be my age. I wouldn't eat a piece of gum older than me. Haha

Howbout you guys? Anybody brave enough to admit they eat the gum too? It seems like admitting you eat the gum is akin to admitting you eat your boogers (something I haven't done for a very long time, I assure you!) Feel free to shame me or offer scientific proof that old gum causes cancer or something, but chances are, next time I rip an old pack of Topps, I'm inevitably going to snap into that dusty pink rectangle with no regrets. *crunch* Yummmmm........
Posted by defgav at 8:09 AM