I gotta stop spending so much of my paycheck on eBay cards. I gotta! For the rest of the year, no more eBay searches/purchases. Time to start exercising some serious self-control. I'll place some sniping bids on what's currently in my watchlist, but then it's cold turkey till '14. If it gets too tough, I'll have to ask my fiancée to change my password or something. Or maybe I should join with those proud government workers and stay off eBay until the shutdown is resolved. (Don't get political on a baseball card blog! Baseball card blogs are a haven away from political discussion! I do not want to hear about the political leanings of any collectors! LOL) 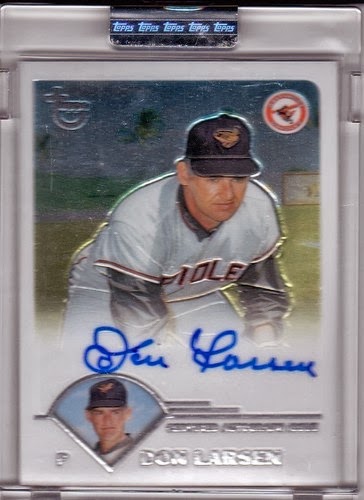 That said, I've gotten some neat cards on eBay lately and they make me happy. Watching Ken Burns: Baseball the other day, when they got to the part when they talk about Don Larsen's perfect game, I giddily grabbed my recently-acquired 2003 Topps Retired certified autograph (inexplicably featuring the man in an Orioles uniform, not Yankees, but whatever) and like a kid at a puppet show, bounced around in my seat repeating to myself, "I got that guy's autograph!" (That one was under $5 shipped, a pretty good deal, I thought.)

But yeah, I'm posting this so I won't be able to avoid it.. it's on Blogger forever now. No more eBaying for me till 2014.

To get my card fix(es), I'll be posting a series of "trade bait" posts here over the next 3 months, probably split up by team, so hopefully I can goad a few of you guys into trading with me. (Please! For me!) Keep me off the pipe pole eBay. Thanks, guys! Have a good one.

UPDATE:
A couple more caveats for myself: I think I may make an exception for searching for (and potentially buying) 2004 Topps Retired autos I need, since that's my "main collecting goal" these days, and the ones I need don't pop up very often these days, especially not with reasonable opening bids. So I may need to keep an eye out for those 20 elusive cards that have evaded me thus far.

Also, the moratorium also applies to COMC orders and any similar card-selling site. But Listia is still ok, just obviously no "buying credits" but I wouldn't do that anyways.

And as I mentioned in the comments, I can still venture to eBay for Christmas shopping.. just not cards.
Posted by defgav at 6:09 PM