This beaut was on eBay a few weeks ago. 2004 Topps Finest Certified Auto Rookie Refractor /#199. I had seen the card up before, but the seller was asking like $150 for it.. Too rich for my blood. After no takers, he reposted it, this time with a low opening bid. I ended up losing it by a buck. This was one of the losses that prompted a little drunken rant on the blog about how I was experiencing a lot of 2nd place eBay finishes lately and it was starting to get me down. (It's probably for the best, though. See my self-imposed eBay moratorium for the remainder of the year.)

But this one really stung. Football cards are definitely not a high collecting priority for me. Over the past few years, my interest in football has been eroding. I didn't even watch the past couple Super Bowls, much less a regular season game. I was once a pretty big Chargers fan, but now I feel pretty out of touch the team and its players.

But I still have a place in my heart for Charger stars from the past, such as LaDainian, Seau, Fouts, and the kid here Philip Rivers. I've got a few standard cards of his, including a Topps rookie card I got for a bunch of Listia credits a while back. But I didn't have any fancy "hit" cards, so this certified autograph rookie refractor would've been nice to own. It really is a nice looking card!

Missing out on this card stuck with me.. It would shine and refract in my mind day and night. --ok, maybe it wasn't that bad, but there were a few times where I'd think of it, either out of the blue, or when seeing that the Chargers won and Rivers had a good game. It was a thorn in my side. A card that got away.

So when, one fateful day, I got an email from eBay for a "second chance offer" on this card for my earlier bid, I jumped at it. I guess the guy who outbid me flaked out or something. It was a lot to pay for a card, and I rarely buy pricey "hit" cards like this (save maybe my obsession with 2004 Topps Retired), but this is a rewarding addition to my collection and I'm glad this wayward card eventually found its way to me where it belongs. (Just my luck, another one of these sold just the other day for less, but oh well.. the highs and lows of buying cards on eBay.)

As I mentioned, I also have his regular Topps rookie, with a different photo that seems to have been taken a split-second before the Topps Finest refractor photo. 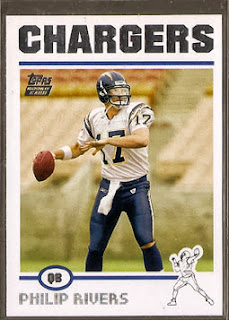 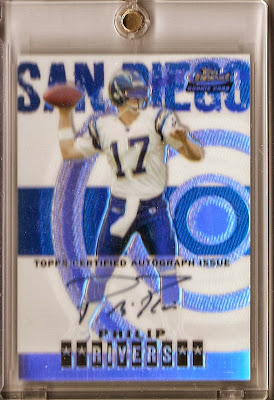