One True Rookie™ is a feature here where we take a look at a player who only had 1 actual rookie card from a major card company during the 80s. First we featured Fred McGriff, then Joe Carter. Both of those cards were Donruss beating Topps and Fleer to the bag. Get ready to chalk up another one to the ol' Leaf corporation!

Julio Cesar Franco was signed by Philadelphia as an amateur free agent out of the Dominican Republic in 1978. He steadily rose through the system never batting under .300 in the minors, plus showing great speed and good power. The knock against him, as with many young shortstops, was his defense, accumulating around 30 to 40 errors per season.

Most of Julio's 1982 was spent in AAA, but he was called-up to the Phillies for a few games here and there, finishing the year with 16 big league games under his belt. After the season, he was included in a trade package to get Von Hayes from the Indians. With Ivan de Jesus the starting shortstop, the Phillies thought Julio was expendable, I guess. You might notice similarities to another young Phillie shortstop who played just a few games in purple before being traded away. Yep, Ryne Sandberg was a step or two ahead of Julio in Philadelphia's farm system in the late 70s, early 80s. Both players went on to greater success at other positions for other clubs. But while Sandberg hopped to 3rd for a year before being entrenched at 2nd, Franco stuck with SS for the next several years, even if he was often atop the AL in errors committed.

But we're getting ahead of ourselves.

When the 1983 baseball card sets came out, Julio Franco was not included in the checklist for Topps nor Fleer. But in one of the earliest examples of scoring rookie gold before the other guys, Donruss gave young Julio a card. 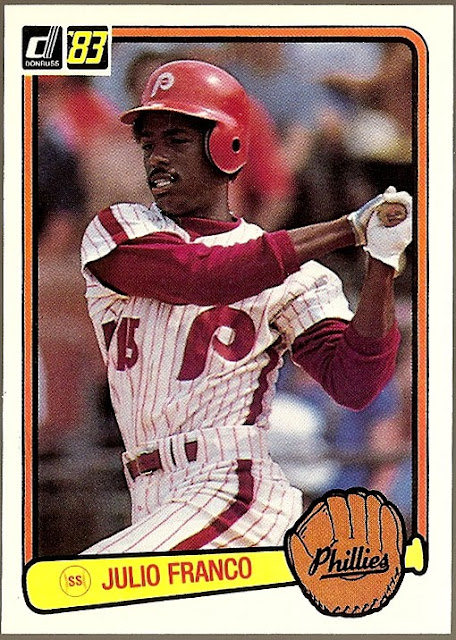 While Sandberg infamously got shut out with no Phillies RC in 1982, Franco at least went 1-for-3 with the big card companies. --Ok, maybe not "infamously" but it's a WTF moment that Ryne had to wait an extra year for his rookie card(s) to come out.

Donruss wouldn't debut their "Rated Rookie" subset until the following year, so who knows whether Julio would've gotten the RR distinction or not. But I'll bet he would have. (Update: A friendly comment informed me that there actually are a few Rated Rookies in 1983 Donruss, but instead of having anything noting it on the front, there's just a bold line of text near the bottom of the card back. He did not in fact get the blurb about being a Rated Rookie.)

Julio made the Indians out of spring training as their starting shortstop. Topps and Fleer got caught with their pants down, as a solid rookie campaign earned him runner-up to AL Rookie of the Year winner Ron Kittle.

Fleer got shut out for the year, since their inaugural Update set wouldn't come out until 1984. Topps, on the other hand, included Julio in their 1983 Traded set, but of course it wasn't until 1984 that Julio had a real, flagship Topps card. (He made the Topps All-Star Rookie Team, but '84 Topps cards didn't feature the rookie cups.)

Over the next few years, Julio's offense and defense both improved a bit. In 1988, he switched to second base to make way for Jay Bell at short. After the season, Cleveland shipped him to the Rangers for Jerry Browne, Oddibe McDowell, and Pete O'Brien. The trade worked out for Texas, as Julio continued to produce, earning 3 straight All-Star nods and winning the batting crown in 1991 when his .341 average bested 2nd place Wade Boggs' mark of .332.

Unfortunately, it would be the last time Julio led the league in a major offensive category. An injury took away much of his '92 season, and his speed was never the same. With his mobility somewhat diminished, he mostly DH'ed or played first base from this point on.

But while the common version of that scenario involves the player hanging on for a couple years then fading away into retirement, Julio managed to defy the odds and stick around not just for a few more seasons, but 15 years! Wow. He was the oldest player in the sport at 49 when he played his final MLB game near the end of 2007. Forty-freakin'-NINE!

Those last 15 years were spent bouncing around with many different teams, often as a pinch-hitting specialist and platooning at DH or 1st. From Texas, he went to the White Sox for the '94 season where he found his power stroke, setting career highs in home runs (20) and RBI (98) even with the strike-shortened schedule. Then he spent a year playing in Japan. He returned for another stint with Cleveland in '96. He went to Milwaukee for the second part of the 1997 season. Then back to Japan for '98. Then he played in Mexico for '99, also getting a solitary at-bat (a strikeout) with Tampa Bay late in the season. The year 2000 found him playing in South Korea. The next year he was back in Mexico much of the year, then signed with Atlanta for the last month of the season and stuck with the Braves through the end of 2005. He signed with the Mets for 2006. In 2007, he finally started to slow down. New York released him after 40 games, and he finished up with 15 games back with the Braves, ultimately ending his major league career. And he still wasn't done! He played a bit in Mexico the following year before finally hanging up his cleats. And even then, he couldn't leave the game, going straight into managing. He currently manages in Mexico.

His major league career totals are pretty darn good. If not for the seasons "lost" to foreign leagues, he would have most likely gotten well over 3000 hits, therefore garnering serious Hall of Fame consideration. But instead he ended up with 2,586 hits and a fine .298 average. Add to that 173 homers, 1,194 RBI, and 281 stolen bases. Excellent career numbers, but not quite enough to impress HOF voters. In his first year of eligibility, 2013, Franco received just 1.1% of the vote and was dropped from future ballots. The list of players with numbers closest to him at baseball-reference includes 2 HOFers in the top 10, Enos Slaughter and contemporary Roberto Alomar, plus the "not in the Hall but probably could/should be" Tiger tandem of Alan Trammel and Lou Whitaker.

Counting all professional hits (minors, majors, Dominican, Mexican, and Asian leagues), he's got well over 4,000 hits, in the company of Pete Rose, Ty Cobb, Hank Aaron, Stan Musial, and Ichiro Suzuki. He had the most career MLB hits by a Dominican-born player until Vlad Guerrero passed him. He holds the record for oldest non-pitcher regular MLB player (ie, not a publicity stunt appearance), and oldest to hit a home run and grand slam.

Who would have thought that Julio Franco's major league career would stretch for a whopping 25 years? After that first year, anyways, only Donruss deemed him worthy of a flagship card. Say what you want about them, but you gotta give Donruss credit for their rookie selection in the 80s. Excellent foresight once again in identifying a future star and giving him his one true rookie. 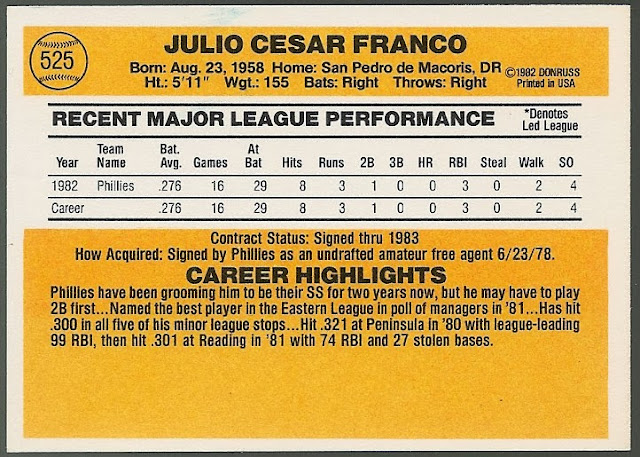