Mike Fiore's major league career wasn't all that impressive. He secured his place in baseball lore, albeit it a footnote, when he hit the first home run ever in Kansas City Royals history. But where his skill really shone was hit ability to make a scoop pose for his baseball card photos. It's only fitting that Fiore is the initial subject of Pose Masters, a new reoccurring(?) feature here at BCB celebrating athletes whose skills on the diamond extended to when they were standing in front of a photographer getting a shot for a forthcoming baseball card.

Fiore, a first-baseman, has 3 solo cards: Topps 1970-1972. His best year (his only decent year, in fact) was his rookie campaign of 1969 with the expansion Royals, when he batted .274 with 12 tatters, one of which was that fateful 1st Royal jack, leading off the 2nd inning of the 5th game of the season, against the A's on April 13th. 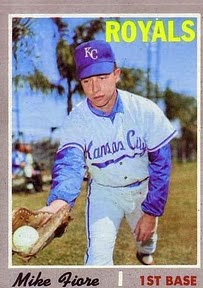 Unfortunately for Fiore, the dreams he must've entertained of becoming Mr. Royal, beloved by all of Kansas, not just their eponymous city, would go unfulfilled, paving the way for George Brett to claim the title years later. He bounced around with a few more teams, first as an underperforming bench player, then toiling for several more years in AAA.

But he leaves us with a legacy of scooping baseball card photos that is unmatched! He really knew what he was doing, and the camera ate it up! You gotta wonder if the photographer suggested the pose each time or what. I'd like to believe Fiore came up with it himself.

Mike Fiore: "I got this! Check out this bad-ass pose of me scooping out a low throw from short! Boo-yah!" 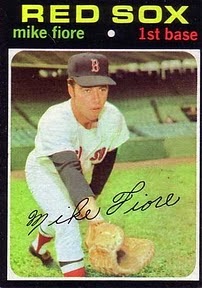 
It's not like he was known for his excellent defense. In his only year with 100+ games, 1969, he committed 10 errors at first-base in just 91 games at the position, 3rd most in the league. (He also added another error in 13 games playing the outfield.)

Coach: "Fiore, here comes the throw.. get your glove up!"

Mike Fiore: "Screw that, coach! Mike Fiore is all about the scoop. THE SCOOOOP! [ball flies just over his shoulder] oops." 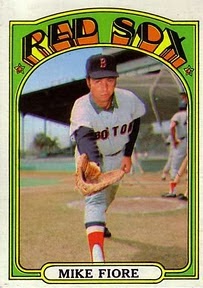 Today, Mike Fiore might be relegated to the answer of a KC Royals trivia question, but for fans of vintage baseball cards, he will forever be fondly remembered as a true pose master.