I've talked about my exercise in self-restraint of not purchasing any cards for the rest of the year. I made an exception for 2004 Topps Retired autos. And I recently caved in and bought some more cards. At least it wasn't eBay, though. The site Just Commons has apparently been around for a few years, but it seems like the blogosphere has really been buzzing about it the past few weeks. I had to get in on the action. I threw 47 cards in my cart, most for around $0.08-.0.30 a pop. I splurged on one relatively-pricey card ($6), but otherwise everything was under a buck each, and my total was under $15. Very happy to fill in a bunch of holes in my player collections on the cheap. (About half the cards were Bill Madlock.. nearly completing my Mad Dog standard base collection.)

I'm sure I'll be back for another order before long. So now my card acquiring avenues include eBay, Listia, COMC, Just Commons, and in theory, trades. (I'm hoping my new "Desperate Dozen" card-specific wantlist on the sidebar will help drum up a trade or two. And I still need to get around to posting some "trade bait" posts.)

As for pros and cons, COMC shows you what the cards look like, which is a definite edge over Just Commons, which doesn't feature card images. So if you're picky about condition/centering, COMC gets the nod. Plus, if you're a team collector, you need to be careful not to accidentally get a card of a player on a different team, like Dodger fan GCRL did when a Sheffield he bought turned out to be a Yankee card.

And COMC has a bigger inventory, generally speaking, including all sportscards, not just baseball. While Just Commons is named that for a reason, there are in fact some non-commons too. But don't expect to find many vintage cards, especially of star players. But the site is well-stocked for 80s, 90s, 00's, and today. It seems like the way the site operates is the guy (guys?) behind the site break cases of cards and buy big lots, putting the hits on eBay and the "misses" on Just Commons. Sounds like a good idea to me.

It's not uncommon for Just Commons to be out of stock on a card even though it'll be listed as available and the site will allow you to purchase it. Of the 47 cards I ordered, one ('81 Donruss Gaylord Perry) was sold out and I got my 15 cents refunded when the order shipped. It took about a week from the day I ordered to the day the cards showed up. Pretty decent.

I have to give the nod to COMC when it comes to accuracy, though. I've never gotten a "wrong card" from COMC, but there were a couple mistakes in my Just Commons order. I ordered 1985 Donruss #200 (Bill Madlock), but instead received 1984 Donruss #200 (Manny Sarmiento), and I ordered 1985 Fleer #468 (Bill Madlock) but received 1984 Fleer #468 (Nick Esasky). So looks like whoever pulled the order was off by a year in the box he or she grabbed for these 2 cards, and just looked at card number, not player name. I probably won't bother pestering them about it since these are just 15 cent cards, but yeah, it's a bit of an annoyance.

And for price, it's Just Commons by a wide margin.. cards are roughly about half the price of COMC on average. Plus US shipping is free at Just Commons for orders over $10. COMC used to have a deal similar to that, but now has a $3 flat shipping cost.

There's another site called Sportslots that many people seem to like for buying their singles. I haven't ordered from that site yet, but it seems to basically split the difference between COMC and Just Commons in most areas.

So yeah, I'm happy to have let JC into my life (wait, I'm talking about Just Commons, here, not getting religious). Many of these newly acquired cards will be featured in upcoming posts here at the Breakdown.

Here's the pricey $6 card I bought: 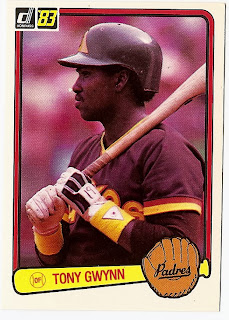 A Tony Gwynn 1983 Donruss rookie card. (At first I thought that Rudolph dot at the tip of his nose was a defect in this particular card, but a Google image search seems to indicate all copies have it.) His Topps rookie was one of the first "expensive" cards I bought when I was a young San Diegan. Earlier this year, I got a Fleer rookie off Listia. And I had won a Donruss rookie off Listia, too.. BUT the seller flaked out and never sent the card. Bummer. But now I've finally achieved the Gwynn Rookie Card Trifecta. It feels good.

I also picked up 3 early cards of the only man who could possibly have even a whisper of a chance at challenging Tony for the title of Mr. Padre.

Trevor was coming up just as I was leaving the hobby back around '93, and I never happened to get any of his cards back then. Since I started back up collecting a couple years ago, I've been playing catch-up building a PC for him, as any self-respecting Padres fan card collector certainly does. These few pre-San Diego rookie-ish issues here definitely help it shape up.
Posted by defgav at 7:57 PM