It's been a while since I've been able to check any cards off my current main collecting goal of all 76 autographs from the 2004 Topps Retired Signature Edition set. It's the one exception I've granted myself during my card-spending shutdown for the rest of 2013.

After my recent Listia heartbreak, it was nice to have a couple eBay scores to soothe the wounds. Molitor and Hershiser from this set have been tough to track down. I think this is the 1st time I've seen either of them for sale since beginning my unwise completion quest nearly a year ago. (Although a Hershisher auto'd printing plate was on eBay a while back, if that counts) I do a search multiple times per day, hate to admit (but it's often just a mindless web-surfing click/habit), usually in vain, but it paid off today. 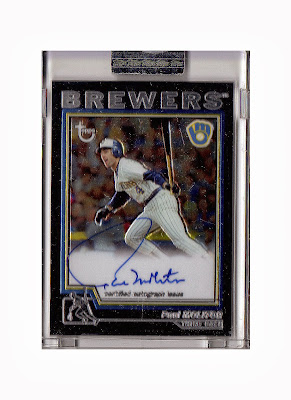 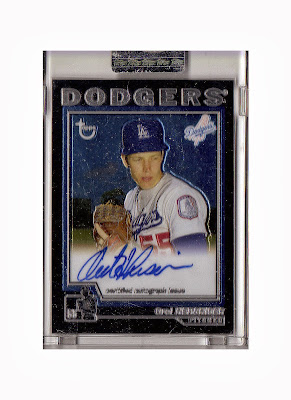 These cards were both posted by the same seller with very reasonable buy-it-now's. I jumped on them so fast, I didn't even slow down to buy them both at once, meaning I paid more shipping than I needed to. But had someone else snatched them while I was farting around with that, it would have caused me to jump out the nearest window while pumping dual middle fingers skyward to all the universe as I plunged to my death.

Got out the door with both cards for under $30 total.. quite pleased with that.. lower than I would have expected for these cards individually, much less combined. Thankfully, the seller was super cool and refunded one of the card's shipping costs without even being asked. Very unexpected and nice of him. Not even just discounted shipping on the 2nd card, but no additional shipping! Plus I know since I paypal'd him separately, PayPal took out more in fees than they would have for one payment. So again, that's above-and-beyond for a seller. I feel like I should give him a plug.. musicrooster$.. and here's a link to his current card auctions.. check him out.. lots of certified autos and other stuff with low opening bids and reasonable buy-it-now prices. He also has many other 2004 Retired cards I already have, and a couple multi-card lots that would make good "starter" sets for anyone looking to get into this set. (Don't! DON'T!! I say that as a friendly warning [it's dumb expensive to collect full sets of certified autos], and also because I don't want more competition for the cards left that I need.. haha)

Usually with something like this, I would wait till I had the cards in-hand before I posted about them, but wanted to rush this post out #1 to cleanse the bad taste from the previous post, and #2 so I could plug the friendly seller before his current auctions ended (that's another cool thing about him: no super-long auctions.)
Posted by defgav at 2:11 PM