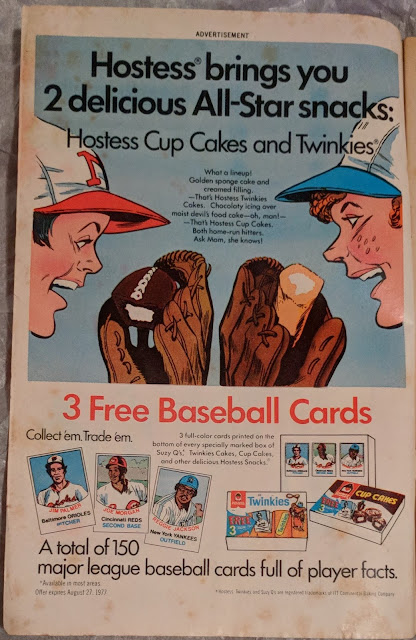 I got some comic books in a trade a while back and got enough response to the idea of taking a closer look at them on the blog to justify starting a recurring "Comic Book Breakdown" series. To make a smoother transition from baseball cards to comics, let's start with this ad for 1977 Hostess cards from the inside cover. Pretty cool. 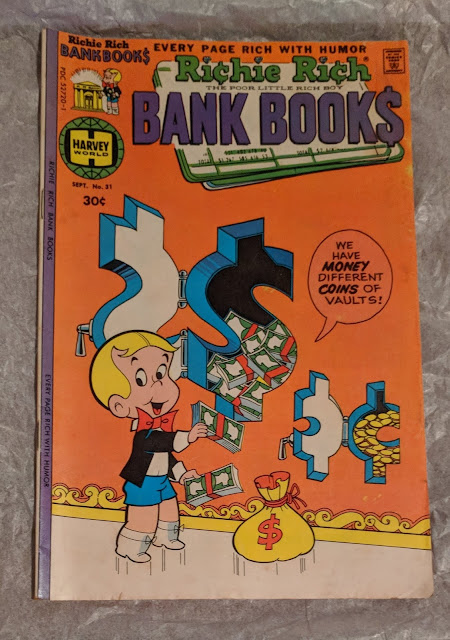 Richie Rich happened to be the comic on the top of the stack, so I grabbed it for this inaugural comic book revue. Cover price of 30¢ into Richie's vault. Terrible puns on the cover. Honestly, I was never much of a Richie Rich fan. Don't recall ever watching any of the TV shows or movies. But I'm hoping for some nostalgic 70s kid humor and some head-scratching ads. 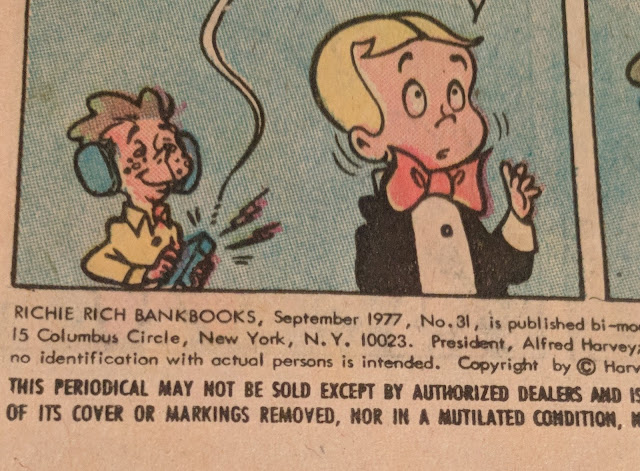 It's dated September 1977. I was still a bun in the oven at the time. Richie Rich must've been popular then, as I assume this is a secondary spin-off comic in addition to the regular Richie Rich comic. The cover says "Bank Books" but on the inside it's one word, "Bankbooks". Bi-monthly can mean either "twice a month" or "every other month", which is confusing, but in the publishing industry it's usually the latter.


The top Billboard single of September '77 was "Best of My Love" by The Emotions. 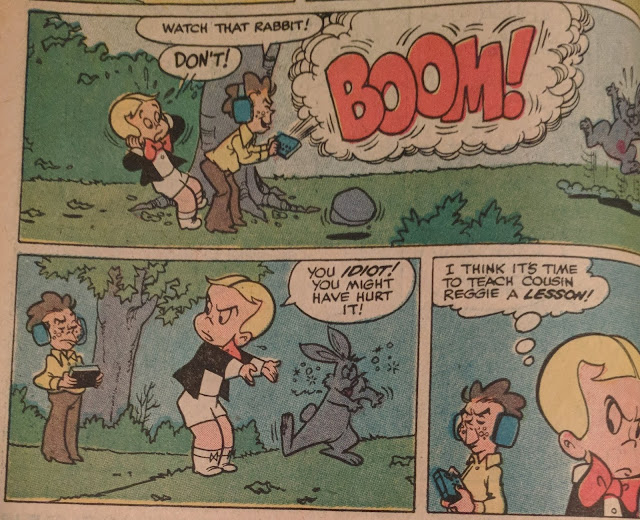 Anyways, the book is made up of several little stories ranging from 1 page in length to like 4 or 5 pages. The first story involves Richie's asshole cousin Reggie who has like a mega-loud fart noise machine and the psycho goes around tormenting small animals with it n' shit. 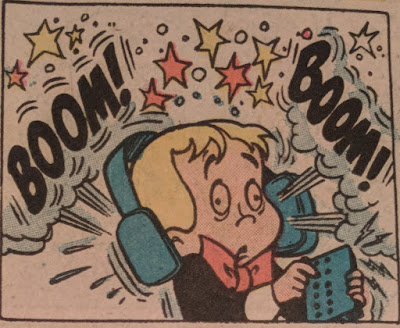 Richie tries to use it on Reggie, but the prick rigged it to hit Richie instead. I think this panel would make a good meme. Something like... 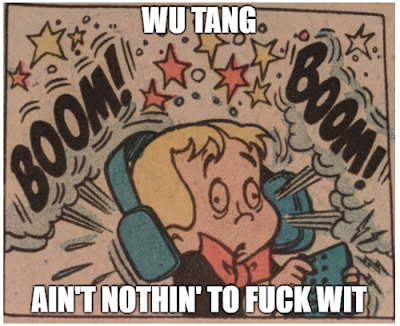 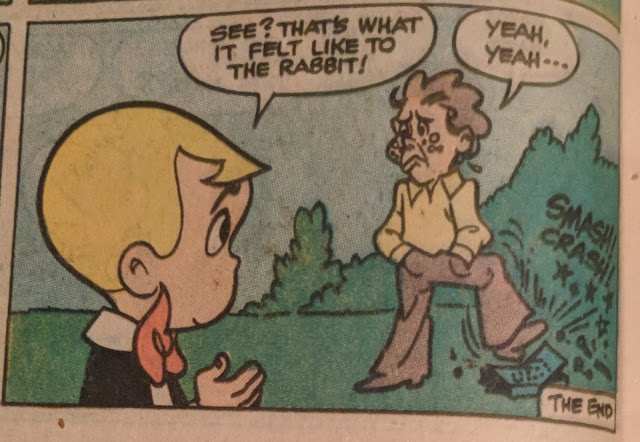 Then some Hollywood producers hear the noise and think it'd be a great device to use in the war film they're making. But then it goes off and blasts everybody, including Reggie and the producers (who decide to make a peace film instead). Seeing the error of his ways, Reggie smashes the fart machine. The end of story #1.

The next story is a short one where Richie sees a Native American dancing, and joins in, helping with a rain dance. 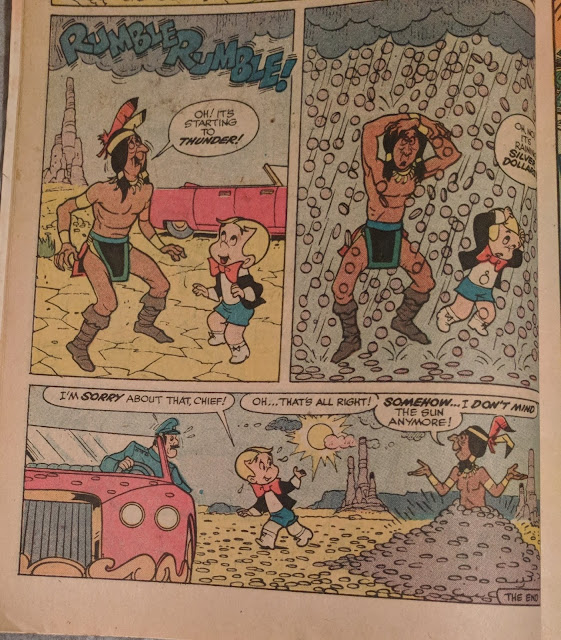 Poking fun at ethnic stuff like that would likely be off-limits today, though this is pretty harmless. 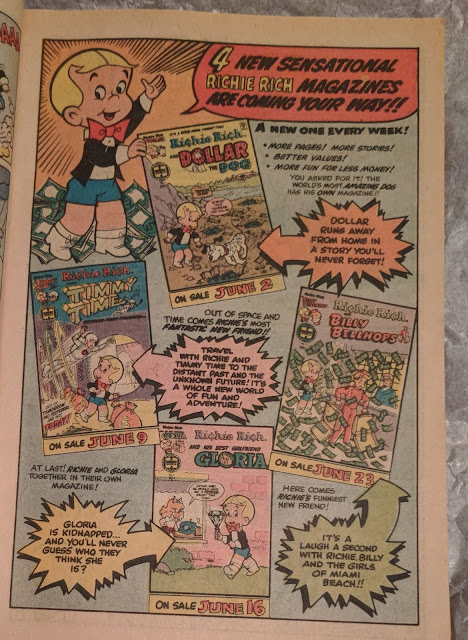 Yeah, Richie Rich comics must've sold well back then, getting 4 separate offshoots for Richie's dog Dollar and friends Timmy Time, Billy Bellhops, and Gloria. So this comic was from September and it's advertising new comics that aren't even coming out till the following June? Or maybe this is a repeat of an older ad and they had already come out that prior June. Whatever. 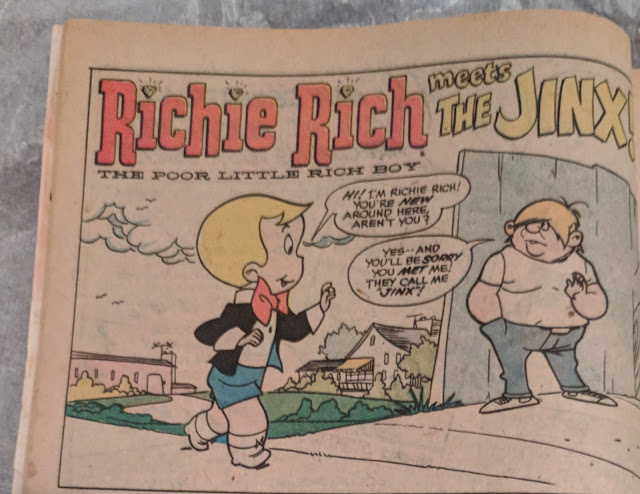 Now here's a story of Richie trying to make friends with some off-putting kid who goes by Jinx. He warns Richie that he brings bad luck, but in a switcheroo, a bunch of good stuff starts happening to Richie, such as accidentally striking oil. 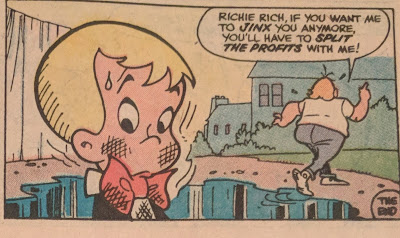 Jinx takes off and flips Richie the bird. 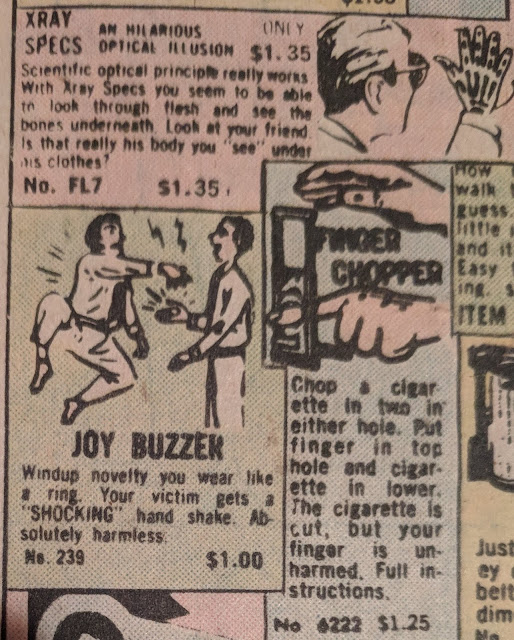 Here's a detail picture of some items in one of those crazy ads that comics of the time were known for. Xray Specs, Joy Buzzer, and... Finger Chopper?! Yikes. Oh, don't worry, it's for kids to cut filters off cigarettes. Much better. 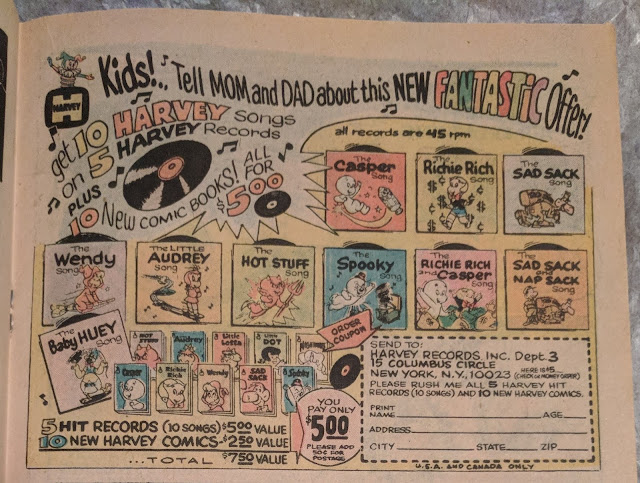 Finding an ad for records, I was hoping to see some cool bands from the time like Queen and Fleetwood Mac, but I should have known that a kiddie book like this would just have novelty songs by(?)/about comic characters. I'm sure these songs are pretty bad, but I wouldn't mind giving a curious listen. 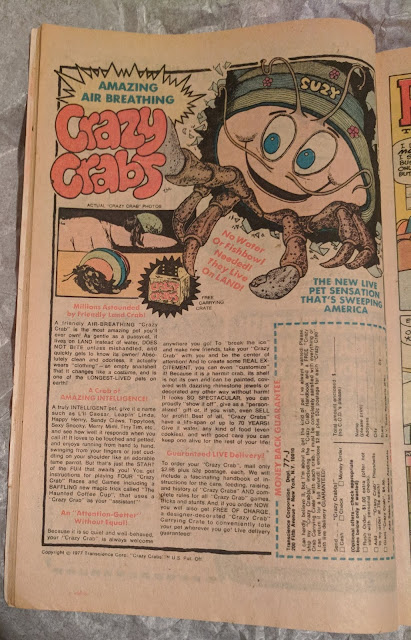 You could order live crabs through the mail to keep as pets? That is crazy! I can't imagine kids of the 70s kept those poor creatures alive for long, even though the ad talks them up as "one of the LONGEST-LIVED pets on earth!" 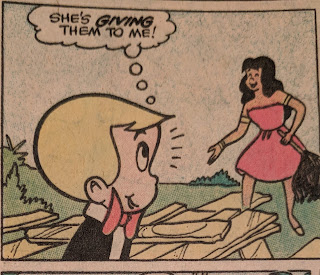 We're nearing the end now. This story features Richie riding on top of a kite and eventually getting marooned on a tropical island. He figures out how to play the natives into making him rich by building them bridges. It ends with his dad rescuing him and all the natives dying of smallpox. j/k

Billy Joel's The Stranger was released in September 1977 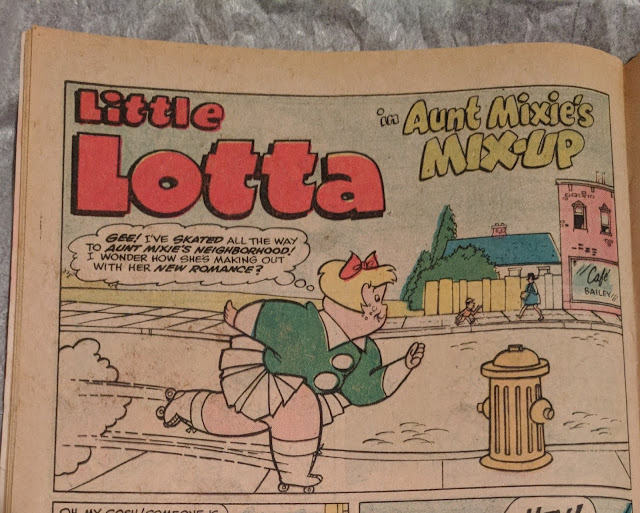 The final story in the book doesn't feature Richie, but rather stars a pudgy girl named Little Lotta. She sees a guy trying to climb a ladder into her aunt's window, so she grabs the ladder and tosses the would-be thief over a fence. Then, a different dude starts climbing a ladder into her aunt's window. Lotta calls the cops, but as you probably guessed, it was all a misunderstanding and the dudes weren't trying to break into the house. Turns out Lotta's aunt is promiscuous and the guys were looking for some action. The story ends with the aunt hooking up with the cop. 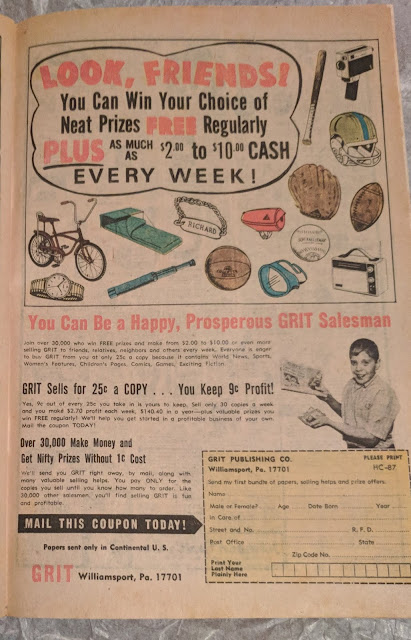 Ah, good ol' Grit ads. Though it's gone through some changes, apparently Grit is still being published today. Wow. I remember seeing ads like this in the late 80s, early 90s and considered trying to become a Grit salesman to earn myself a bike or something, but never pulled the trigger. Any of you guys have any Grit experience? 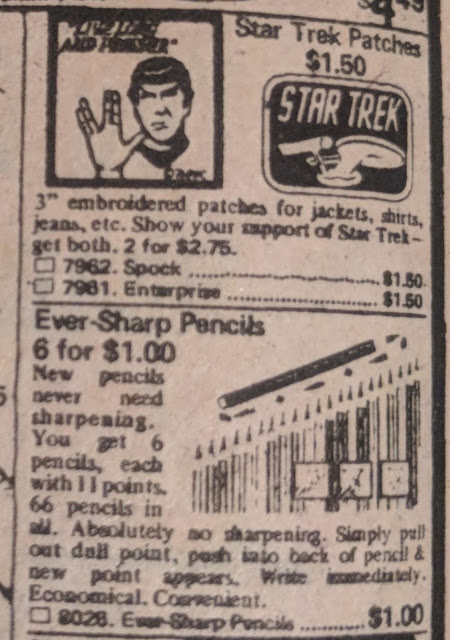 I think Star Wars was still in theaters around this time; I didn't see any mention of it in the comic, but here's some Star Trek content.
As for the Ever-Sharp pencils, I remember as a kid having a couple pencils like that with the replaceable points. Those things became obsolete with the rise of mechanical pencils, though.

So that about wraps it up. I hope you enjoyed this first issue of Comic Book Breakdown. I had fun whipping up this post, so will probably do more in the future from time to time. Thanks for reading!
Posted by defgav at 3:31 PM