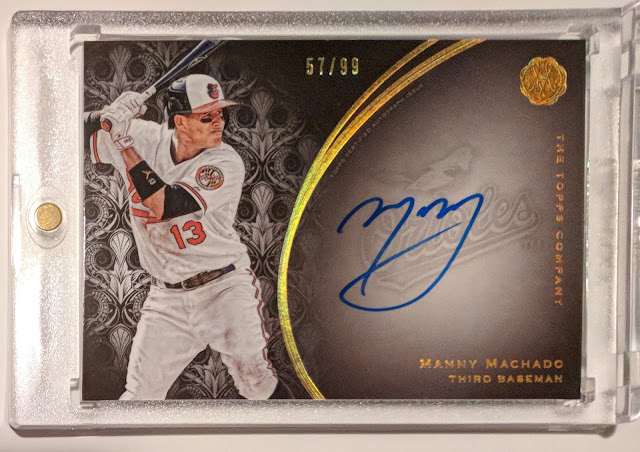 Well, dang it, I've come to another big round number. This one is a little scary for me, as I'm an admitted semi triskaidekaphobe. I'm not super militant against it, but like when my car stereo had a numeral volume level, I would set it at 12 or 14, even though 13 was the optimal setting.. and at the gym when I ride the exercise bike, I never set the resistance on 13, just because I'm weak minded and think maybe it will bring bad luck (like a douchey guy will enter the gym. Full disclosure I don't like most of the other regulars at my work gym, but I'm just easily annoyed.)

As far as baseball players who were brave enough to wear jersey number 13, the best active player is Manny Machado (I guess Hanley Ramirez isn't officially retired yet.. but.. you know.) 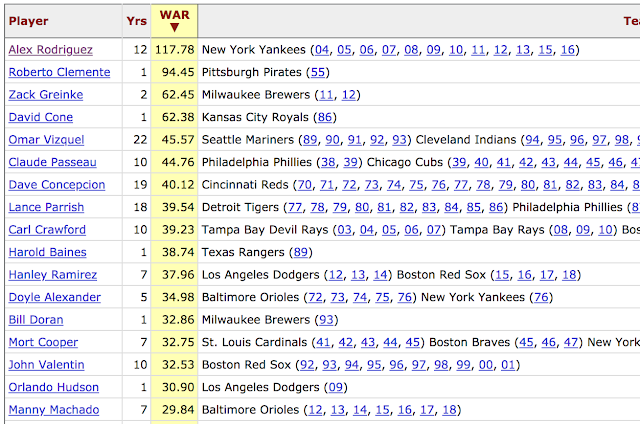 (Edit: whoops, missed Greinke up there. But he no longer wears #13, so whatever.)

So I figured I'd use this as an excuse to sort out my Manny Machado PC and show it off. 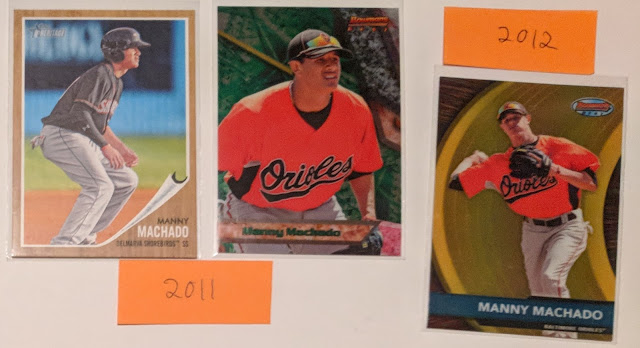 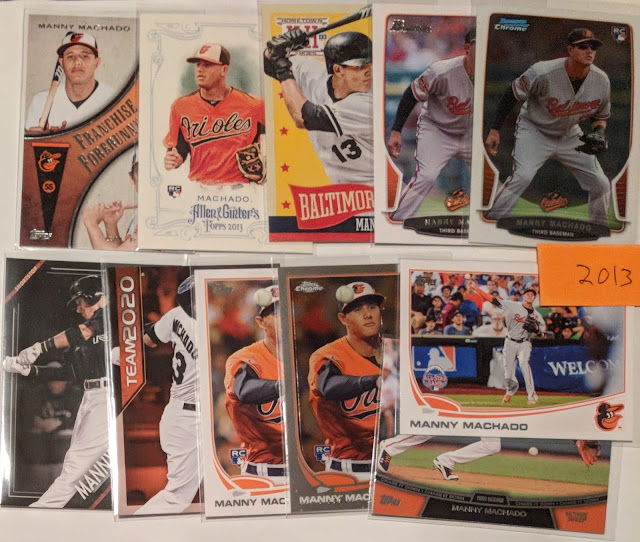 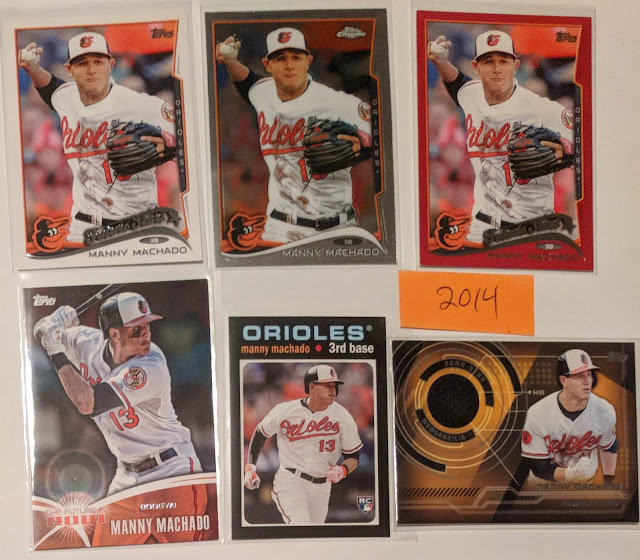 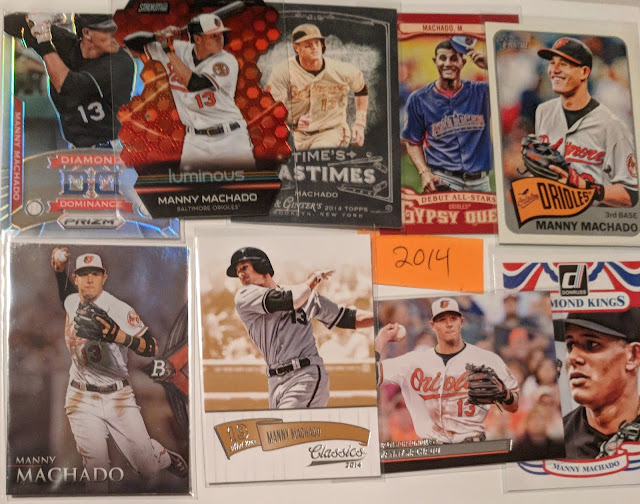 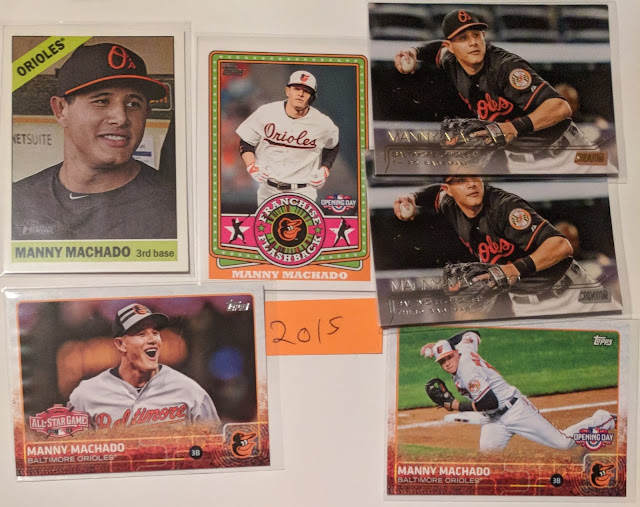 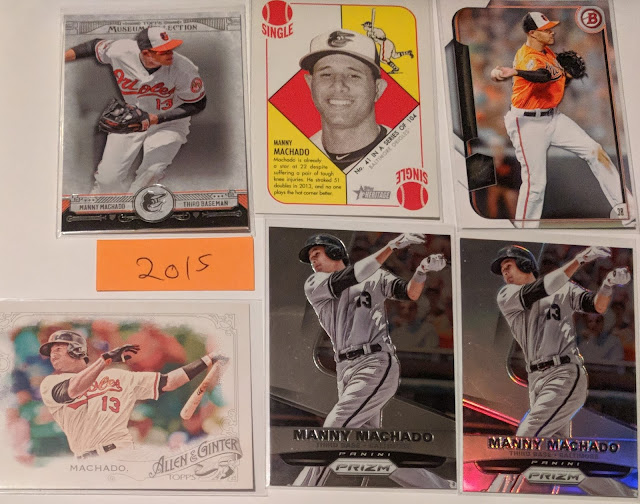 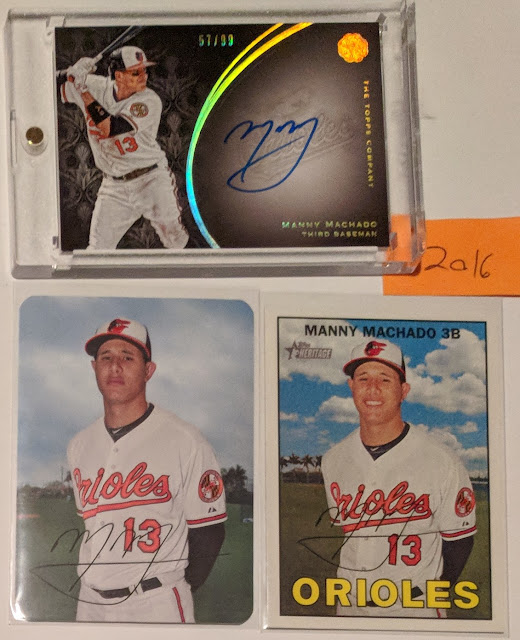 2016 pt 1. Here's another look at the only Manny Machado auto I've got.. I like it! Another nice pickup from 2016 Topps The Mint.
And check out those 2 cards on the bottom.. Sure seem to be from the same photoshoot, but one has a real background, and the other has an "enhanced for Heritage" background by Topps. Funny. 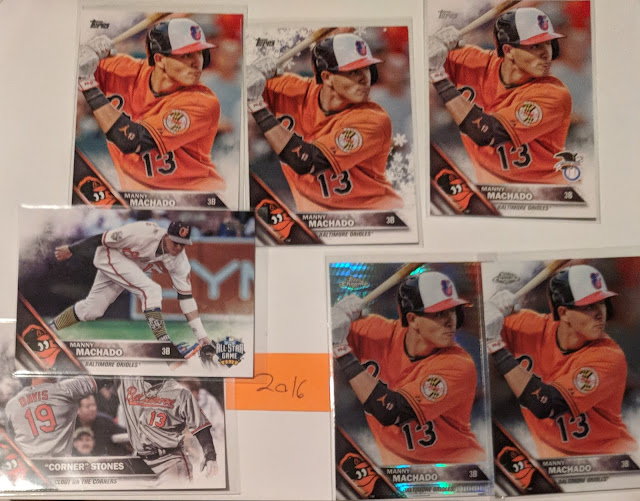 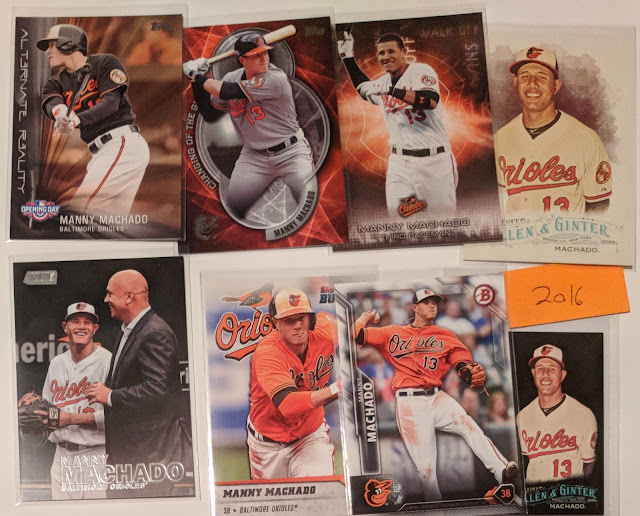 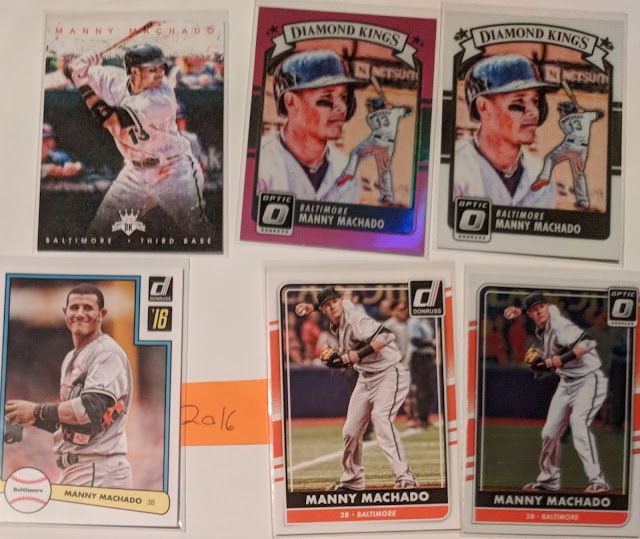 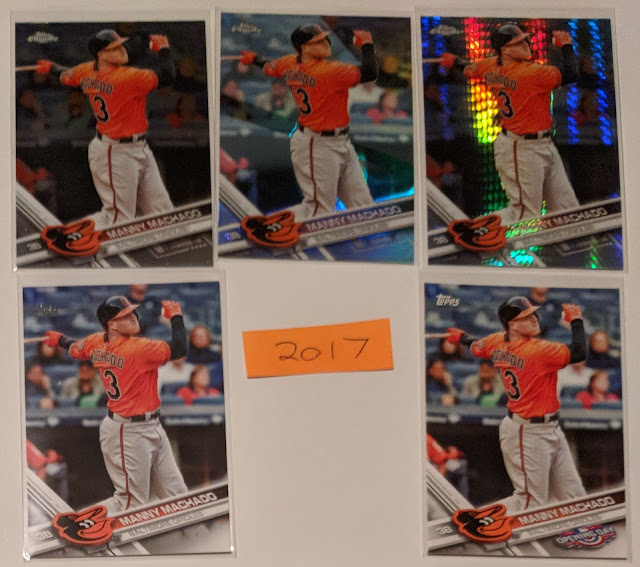 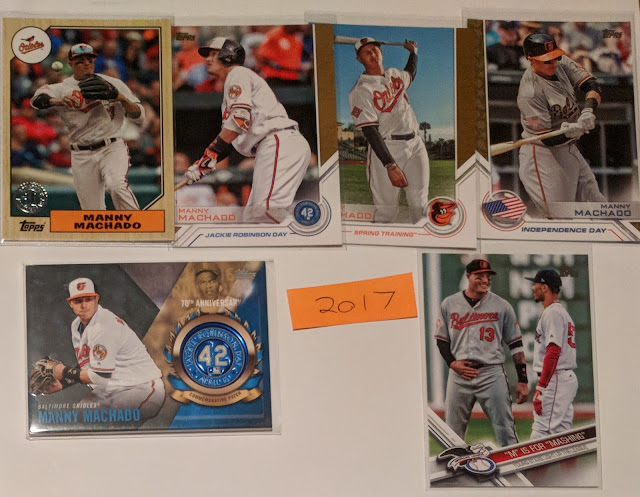 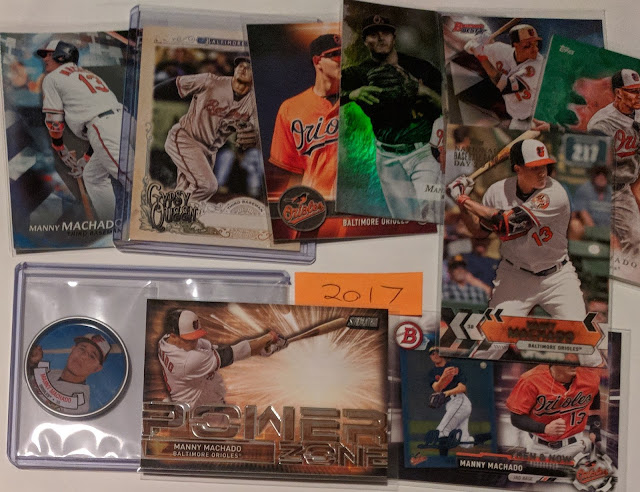 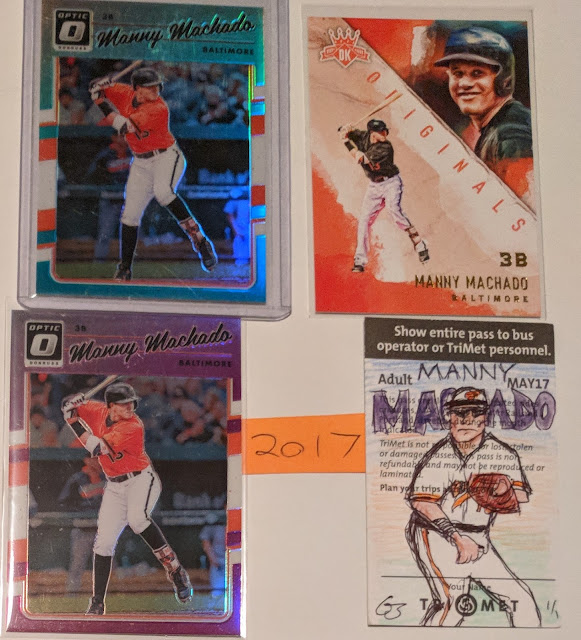 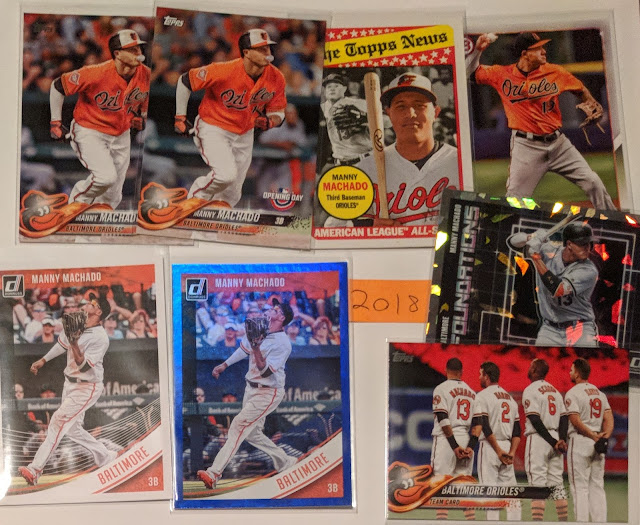 By my count, that's 97 unique cards. And I know for a fact I've got other cards from him sitting in 3 complete sets that I didn't bother digging out for this post, so I think I can now consider him a member of my Hundred Card Club. As such, I'll likely bump him off my official wantlist soon, though I'll still be happy to accept any cards of his I don't have, via trades or opening packs. He's an exciting young player and fun to watch. Doesn't look like he'll be with the Orioles much longer; it'll be interesting to see where he ends up. 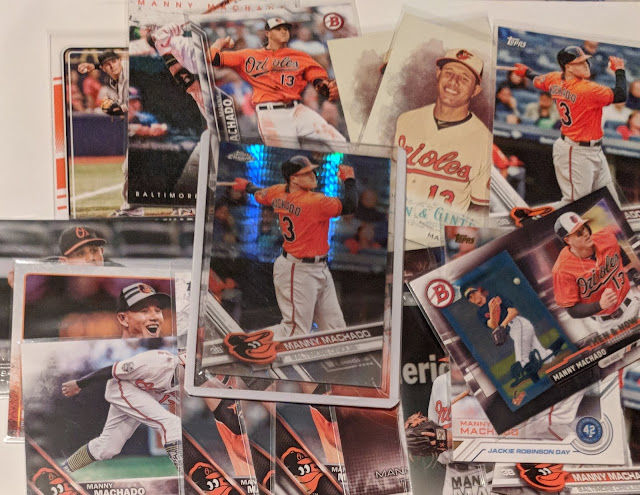 Here's a pile of dupes I weeded out while sorting the PC. Available for trade!


I'd hate to do a milestone-number post without a contest, and it's been a while, so let's do it. Just leave a comment on this post to enter, and I'll random off a winner in a few days. The prize will be some solid cards tailored to the winner's collecting preference. I'll do a little shopping if necessary. If the winner hasn't commented on any of my other posts so far in 2018, the prize will be a PWE. (Come on, guys, don't be afraid to comment on non-contest posts! I know I'm not always the best at replying to comments unless I've got something to add, but the interaction/feedback is much appreciated.) Otherwise it'll probably be a more substantial package.

Thanks as always for reading and have a great weekend!

Holy shit. I just remembered today is my blog's anniversary. Seriously, I typed up this whole thing and then it hit me. Baseball Card Breakdown turns 5 today! What a coincidence that it's also the 1300th post. (Funny enough, my 500th post was on the 2 year anniversary, though I sorta planned for that one to coincide.) Ok, I guess I'll have to pick a couple winners, one celebrating the 1300th post, and another celebrating 5 years. So yeah, comment below to be entered in both. Thanks!