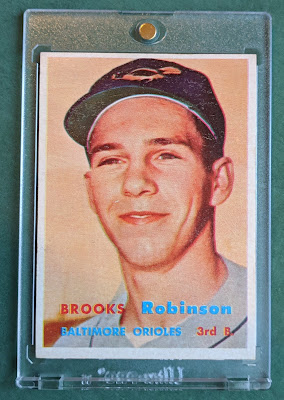 BOOM! Brooks Robinson rookie card! As far as cards with "boring head shots" go, this is one of the best around: Young Brooks (the photo is from 1955, according to Wikipedia) smiling under a cool orange sky. When I got serious about building 1957 Topps, it didn't take long for me to figure out that Brooksy here was probably the toughest card in the set. Not only is it a rookie card of a beloved all-time great, it's also in the shortprinted 4th series, so there just aren't many of them out there. I thought it might end up being the last card I needed for the set, but had been keeping an eye out for one to come along at a decent price, and jumped on this one when it popped up at a very reasonable Buy-it-now. It looks to be in excellent condition.. four sharp corners, good edges, decent centering. (And yes, as an authenticity check, I put it in a stack with a few '57 commons to make sure it passed the cardstock test. The size is good too; no evidence of trimming.) Really the only thing that knocked it down into an affordable price range is a tiny hairline rip behind Brooks' neck. At some angles, like in the above pic, you can't even notice it. Though at other angles, it's more obvious.. 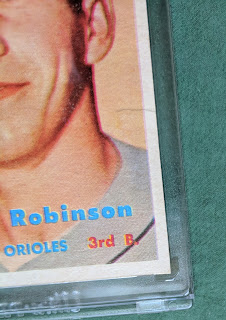 Looks like it could be a little dog hair like the millions floating around my house, but nope, it's a micro cut. I've never been one for submitting cards for grading, but I'd be curious what this one would grade out to. Would the tiny tear torpedo its hopes, or would it still be good enough for a mid-range score, everything considered? 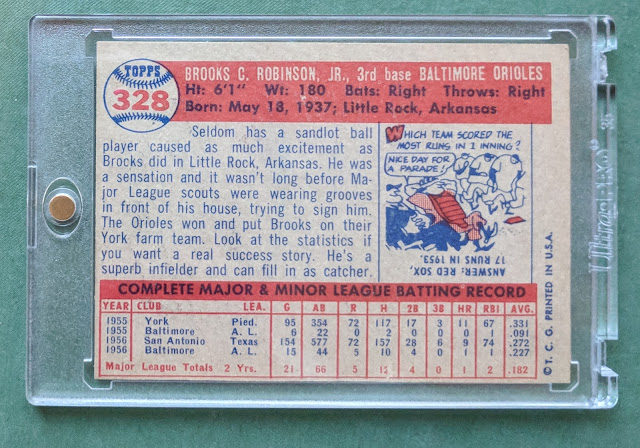 The back looks good too, but you can see the nic at the career hit totals.

The Human Vacuum Cleaner was only a li'l human dustbuster at this point in his career. Interesting the blurb mentions he could fill in as catcher. I had to look it up, but he never caught in a major league game. Got a few innings at 2nd and short, though. 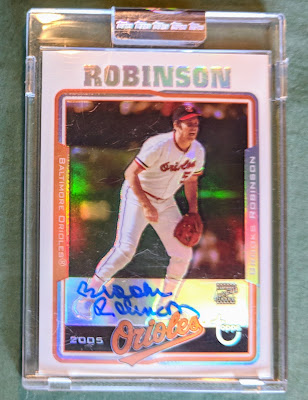 I also added a second autograph of his to my collection not long ago with this 2005 Topps Retired refractor (already had the 2004 counterpart). Nice looking card. It had been on eBay for a while, and I finally pulled the trigger thanks to an eBay promotion knocking the price down a bit. 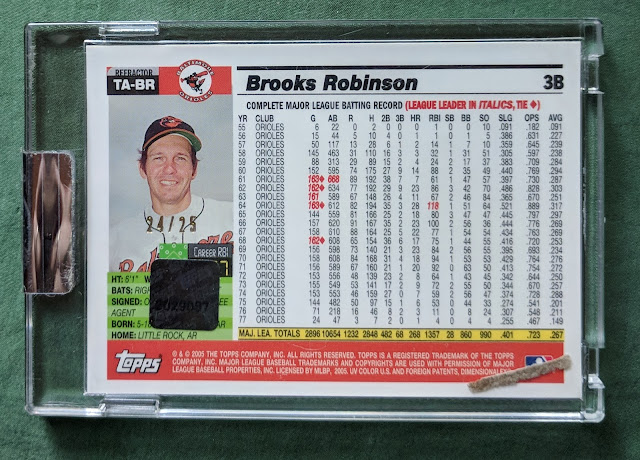 The back shows off his solid career offensive numbers (though of course his fielding was what made him a legend). One minor annoyance with this card is the little piece of cardboard trapped in the case (seen here in the lower right), floating around. Maybe someday I'll bust open the case and clean it out of there, but I do like keeping Retired autos in their original "uncirculated" cases. I'll just imagine it's a "player used" piece of Brooks Robinson cardboard box that transported the signed cards from Brooks back to the Topps offices.

And next up are a couple fun animated gif cards. Anyone familiar with 70s cards knows the classic "B. Robinson Commits Robbery!" card from 1971 Topps featuring a zoomed out photo of Brooks in what would appear to be a desert with no grass visible in the shot. Nick Vossbrink made a suggestion on Twitter the other day that I mash it up with the hilarious "comb the desert" scene from Spaceballs. So I did.

And then I came up with an alternate version...

Now That's a Tatooine card! Swapped out Brooks with the Star Wars droids.

Thanks for stopping by.
Posted by defgav at 3:01 PM