Hang onto your seats, guys! With this Cal Ripken, I've finished off "Group A" in my quest of completing 2004 Topps Retired autographs. 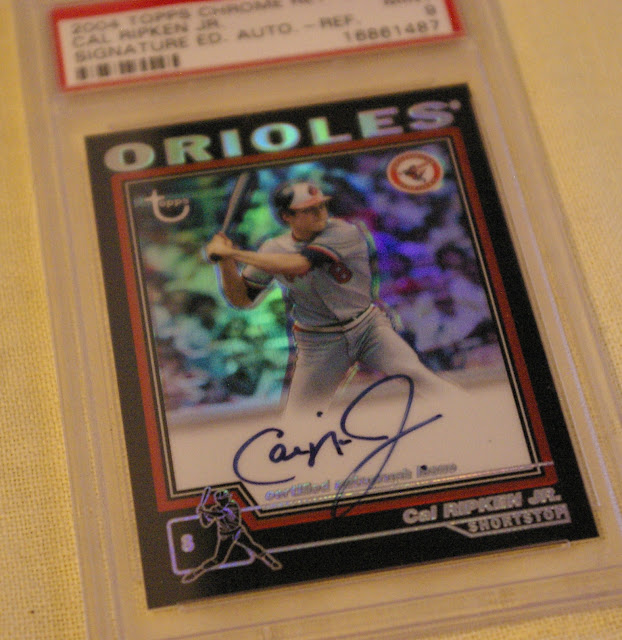 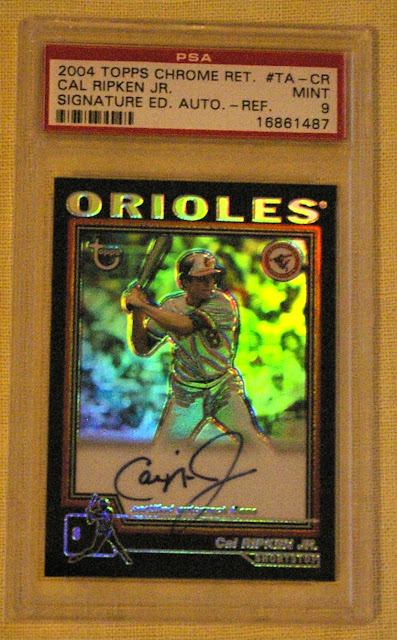 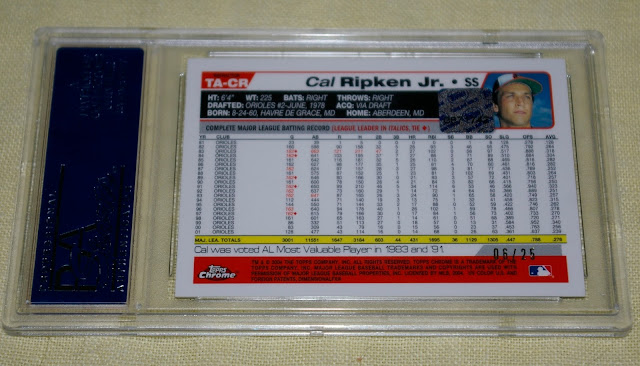 It's a beauty. I think it was the single most expensive card I've ever bought, but it's a great addition to my top collecting goal. It's also my first Ripken auto. He's definitely an all-time great, so I'm excited to own it. While I was at it, I got another 2004 refractor auto of another Orioles legend from the same seller... 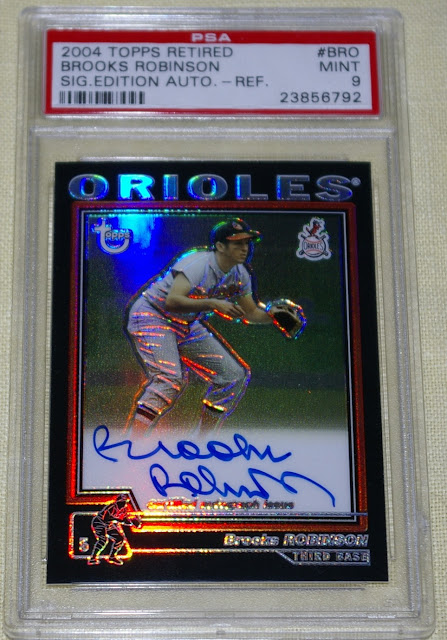 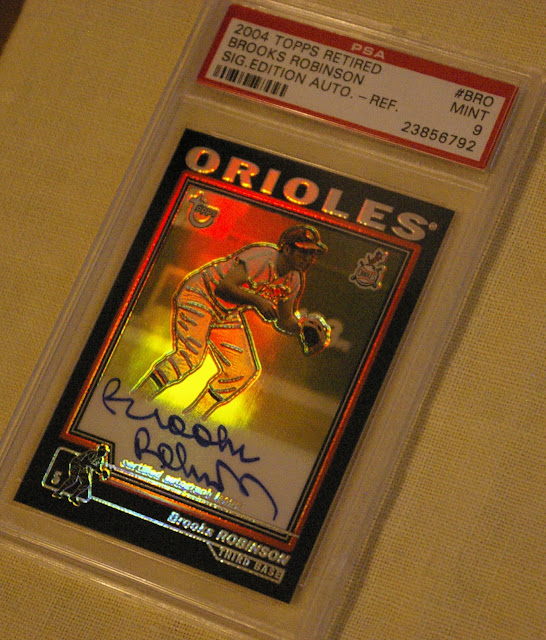 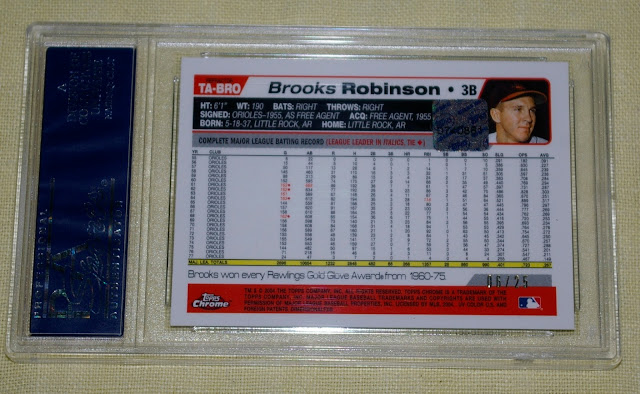 This is an upgrade of the non-refractor Brooks Robinson auto I had. Looking good.

The day after these cards arrived was my birthday, and as luck would have it, one of the gifts from my folks was a birthday check for coincidentally the same amount I paid for these 2 cards (a few bucks more). So I'll call it a wash and essentially count these cards as gifts from mom.

Speaking of parental generosity, so far I've opened one of the hobby boxes I got from my mother-in-law that I posted a picture of yesterday. (I'm trying to stretch the boxes out a little by opening one a day or so rather than just rip through them all at once and crash into those post-Christmas blues.)

I decided to "start small" by busting the 2015 Topps Supreme box. There are only two cards in a box, so it's a quick roll of the dice. This isn't a product I'd give much thought to purchasing myself, but one I'm definitely excited to get as a gift. So on Christmas afternoon, I opened it up, and who should I pull but the birthday boy... 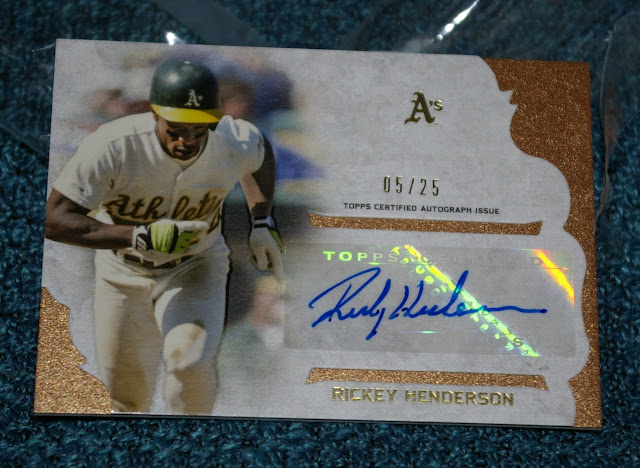 Jesus! Rickey Henderson! That's a solid pull. It's a great looking card and #'d 5/25. In a perfect world, it'd be on-card and #'d 12/25, but this is still pretty sweet! Rickey's a guy I collect (Pads in the Hall!) and this, my second autograph of his, is an incredibly nice addition to the PC. 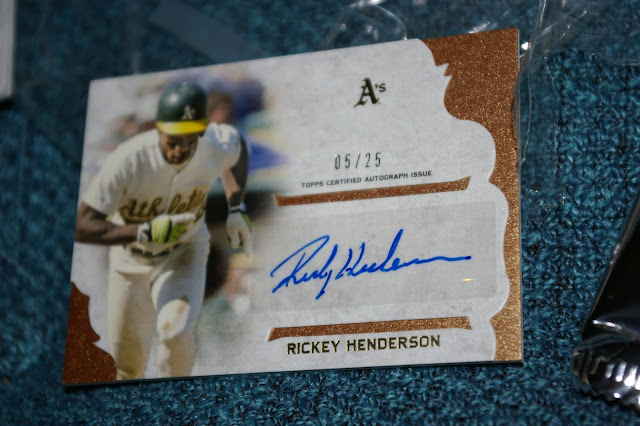 Hard to tell in pictures, but these are kinda layered cards: the base is the gold part, then the rest is like a diecut top layer affixed on that. It's a cool touch when you've got the card in-hand. 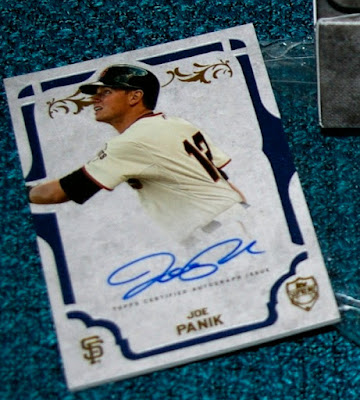 The other card I got from the Supreme box is this unnumbered Joe Panik auto. Nowhere near as exciting as the Rickey, but still not a bad pull. Panik was pretty hot when he came up in 2014 and helped lead the Giants to a World Series championship. Then last season, he continued to play well and made the All-Star team. So I'll probably hang on to this card for now. This auto is on-card, and again, there's a cool layered effect, with the dark blue part being the base, with the rest of the card being like a diecut card on top of that. 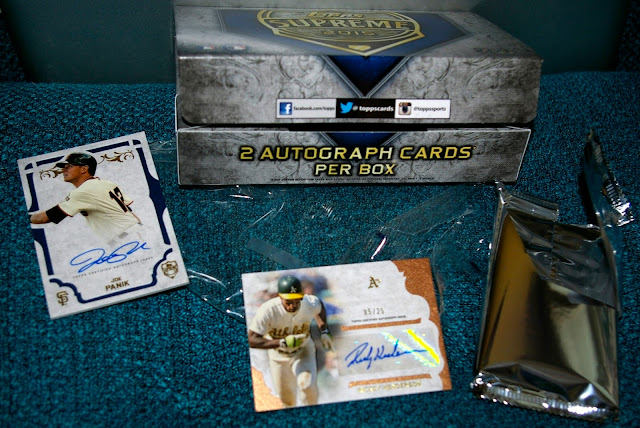 So there was my first and only experience busting Supreme. Fun, but you're better off buying singles on the secondary market, for sure. But again, it made for a wonderful gift, and I thought it was super cool to pull a Rickey Henderson auto on his birthday/Christmas.

Thanks for reading and stay tuned for the rest of the boxes I'll bust this coming week!
Posted by defgav at 2:54 PM