Today marks 10 years since I moved up to Portland. So it's been a full decade since I packed up my things and left behind my hometown of El Cajon in East County San Diego. Let's see.. in that time, I've had 3 different jobs, a couple awesome dogs, gotten married, and most importantly as far as this blog is concerned: returned to the hobby of card collecting.

One way I like to "remember my roots" is by collecting cards of pro athletes who went to my high school-- "Guys From Granite", as I call that part of my collection.

One sidequest I had since the beginning was to acquire an autograph of every Guy From Granite who made the major leagues (currently totalling 8 players), and I'm pleased to announce I've just recently met that goal, finally. To celebrate, let's run down the list chronologically. 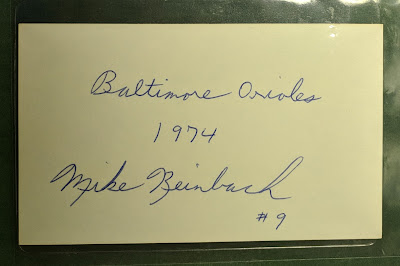 The original Guy From Granite, Mike got a cup of coffee with the Orioles in '74, then had greater success playing in Japan. A few years after his playing days, he was tragically killed in a car wreck. Maybe someday I'll find an autographed card, but for now I've got to make due with a pair of signed index cards.
See also: The Harrowing Tale of Mike Reinbach, Setting the Mike Reinbach story straight, and Mike Reinbach apocalypse. 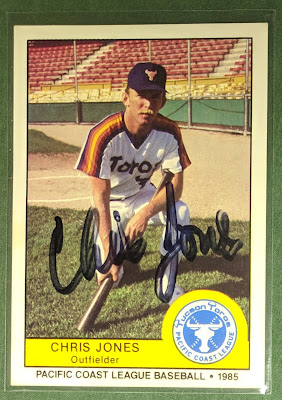 Chris D. Jones briefly appeared with the Astros in '85 and the Giants in '86. He was the last guy I needed an autograph from. His common name makes it hard to search for his cards/autographs (there are a lot of people named Chris Jones in the world), but thanks to Padrographs Rod and an autograph dealer buddy of his, I was finally able to track down a signed minor league card. I've also got his mailing address now and I plan to try a TTM attempt with a custom or two soon.
See also: Chris Jones, but not that Chris Jones 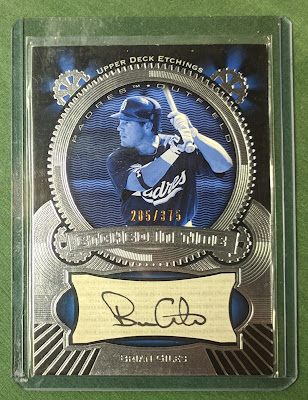 Brian Giles had the longest, most successful baseball career of the guys to come out of Granite Hills High, and so it's no surprise he easily had the most cards produced of the players on this list. He was still active after the next 4 guys on this list had come and gone.
See also: Brian Giles was a narc at my school and My Brian Giles PC 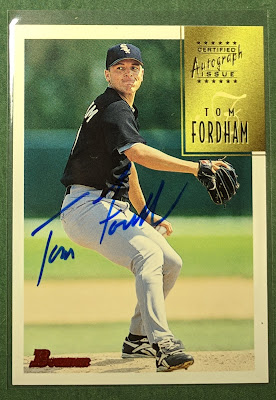 Tom is currently the only pitcher to ever make it to the bigs out of Granite Hills. He got into 36 games (6 of them starts) with the White Sox in '97 and '98. He got some cardboard love back in the day, mainly from Bowman and Best.
See also: Tom Fordham went to my high school 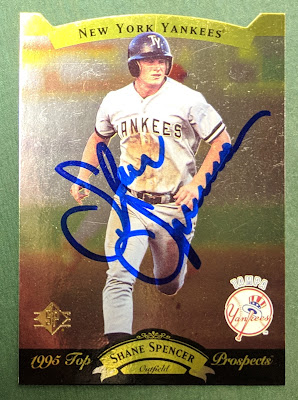 Brian Giles may have had the longest career of the guys on this list, but Shane had the good fortune of being a part of the turn-of-the-millenium Yankees dynasty and picked up 3 rings in his relatively short career, highlighted by some clutch home runs in the fall of 1998.
See also: Yankee hero Shane Spencer went to my high school 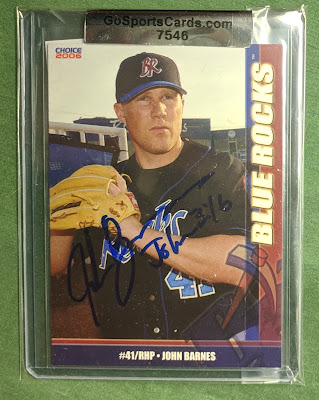 Now we're entering my time at Granite. John was a big man on campus when I was a freshman/sophomore while he was a junior/senior. He came up through the Red Sox organization before being traded to the Twins where he got a few dozen MLB at-bats in 2000-2001. Later attempted a comeback as a pitcher, though didn't make it past AAA.
See also: I went to school with John Barnes and he played in the majors 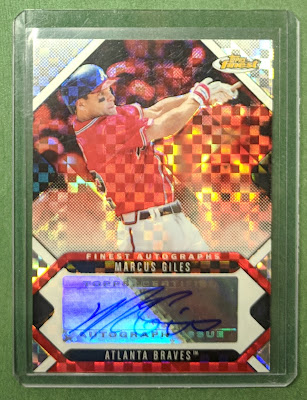 As I've mentioned several times in the past on this blog, I was in the same grade as Marcus, going to school with him from elementary school all the way up through community college. Sure was a thrill to watch him rise through the minors and become an NL All-Star in 2003.
See also: My classmate the All-Star After an extended dry spell, it was great to see another Guy From Granite finally crack the majors near the end of the 2017 season. It looks like Travis recently signed a minor league deal with the Mets, returning to his original organization after a year on the Dodgers' Triple A squad. Wishing him the best of luck in the upcoming 2019 season.
See also: Better Call Up Taijeron! and Superfractor auto pickup!


That wraps it up. Here's to another 10 great years up here in the Pacific Northwest, though I'll always keep my hometown in my heart and in my collection.