Better Call Up Taijeron! (Another Guy From Granite makes The Show!) 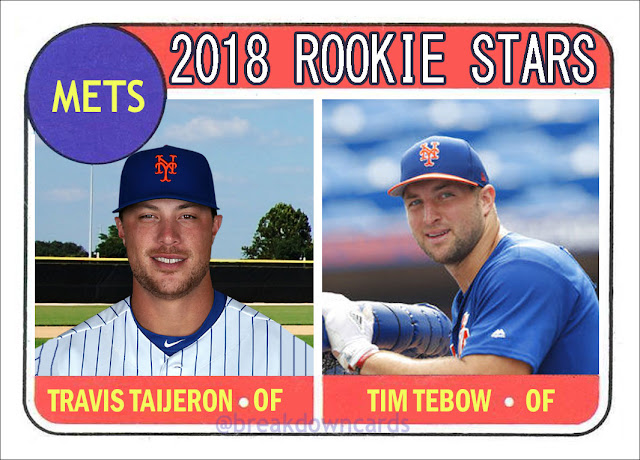 Travis Taijeron (pronounced "Tyrone") got called up to the Mets finally!

Let's take a quick trip back in time. The date: June 18, 2009. The Padres squeezed out a win against the Mariners. Ken Griffey, Jr. went 2-5 with an RBI double in a losing cause. Kevin Kouzmanoff walked it off in the 10th, driving in Adrian Gonzalez to give the Padres a 4-3 win. As far as notable futility, Adrian Beltre went 0-5 for Seattle (What a flash-in-the-pan! He should have just retired then and there! LOL). For San Diego, Brian Giles went 0-4, bringing his batting average down to .191, exactly 100 points below his career BA. His arthritic right knee would then land him on the DL and it turned out that game would be Brian's final gasp of official Major League baseball (though he did play a couple games as DH with the Dodgers during the following year's Spring Training before officially retiring). And with that, Granite Hills High School entered a dark period regarding alumni in the MLB. Our lineage includes a guy representing us in the 70s, another guy in the 80s, a few guys in the 90s and 00s, but nobody in the 2010s yet.

--Until now, with Taijeron taking a bite out of the Big Apple! Very happy for him! I mean, I'm also a fan of Conforto and Cespedes, and was sad to see them taken down by injuries, but I suppose it's a silver lining that this could be an opportunity for another outfielder in the Mets system to get a shot.. specifically a guy who has grinded out nearly 400 games in AAA, definitely deserving of a taste of the Bigs. He was hitting .272 with the Las Vegas 51s, and his 25 taters, 78 ribbies, and 70 walks lead the club. He also lead them with 146 strikeouts, which has been the knock against him, along with shaky defense at times. But hey, plenty of other successful guys fit that same profile (Aaron Judge, to throw out one contemporary name). The 28-year-old rookie will fittingly wear jersey #28 with the Mets. He's the 8th former Granite Hills Eagle to make the major leagues.

Let's take this opportunity to show off my Travis Taijeron PC as it stood the day he got called up. 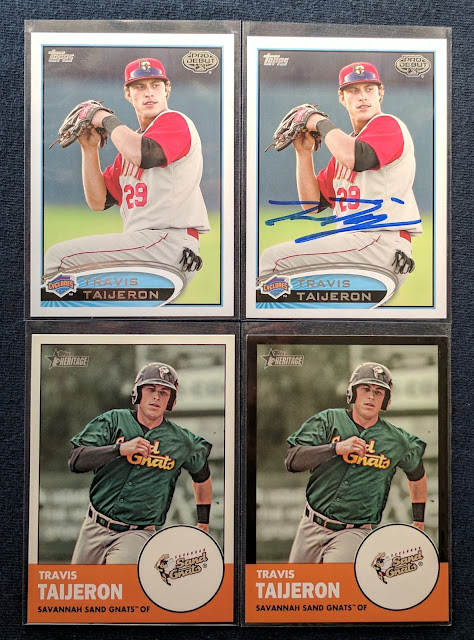 His only mainstream cards to date are 2012 Topps Pro Debut and 2012 Topps Heritage Minors. (Kinda surprising he's never appeared in a Bowman set nor anything from Panini.) Included here are an IP auto bought from eBay, and a black border parallel #'d /96. 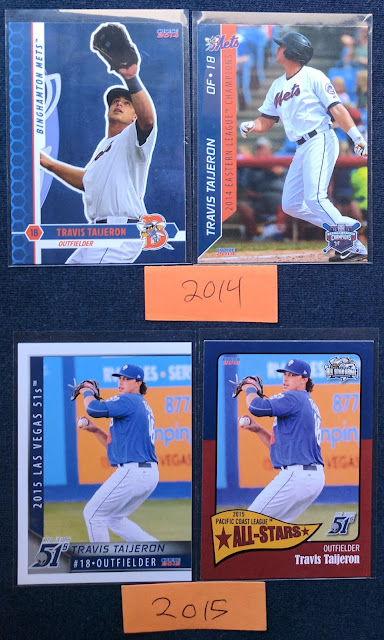 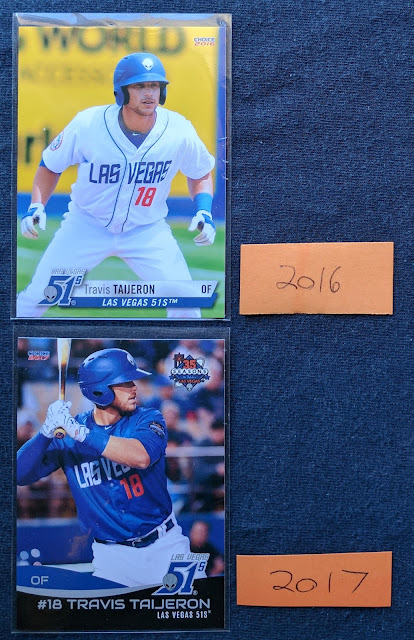 And one each from 2016 and 2017. The 2017 Choice card just arrived today, in fact... good timing! It was included in an order of minor league cards I placed with Go Sports Cards a week ago. Expect a full post on that order within the next few days. 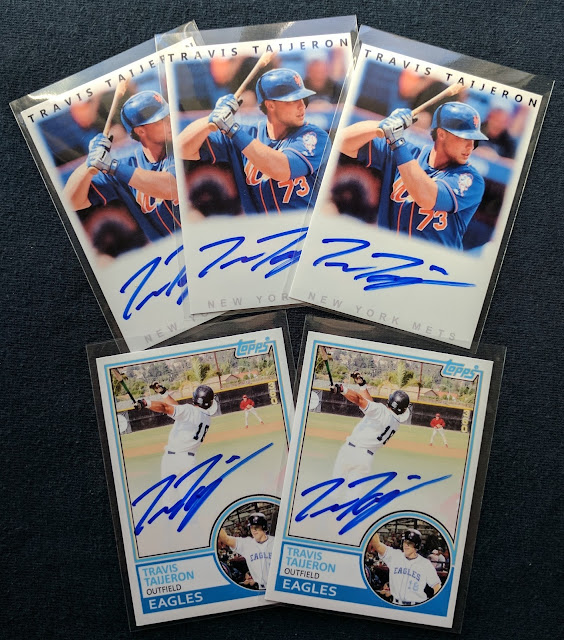 And the highlight of my Taijeron PC, a bunch of TTM autos on custom cards I made. Travis doesn't seem to sign through the mail much, but I got an assist from someone close to him for these. I included extras and offered them for him to keep if he wanted which is how I ended up with so many. (I've got one more 1983-style card that I forgot to include because it's been on display on my bulletin board.)

In the wake of his debut, I'll be crossing my fingers to see some new mainstream Taijeron cardboard soon. It's probably too late for 2017 Topps Update. But who knows, perhaps he'll earn a Topps Now card down the stretch, or at least make it onto a multi-player rookie card in 2018 Heritage such as the custom I whipped up at the top of this post. (That would be funny if he ended up sharing a card with Tim Tebow. It'd make it much more difficult for me to rainbow, that's for sure.)

I know the 2017 season is a disappointment for the Mets, who were expected to contend for a playoff spot, but I'm definitely rooting for them to finish strong. Not only do they have a Guy From Granite on their roster now, but also a Gavin. Yep, Gavin Cecchini was called up again recently and has been getting some starts at second base.

A long-term contest finally underway..
Last year I ran a 2-part contest, and one of the parts was to comment "predicting who you think will be the next Guy From Granite to make the major leagues." And once that came to fruition, I would random out a prize to those who guessed correctly. Welp, a dozen entrants went with Travis.

Let's randomize out to assign numbers and say that the winning number is the combined total number of runs for the Mets and their opponent in whichever game Travis Taijeron makes his major league debut. (Update: He's in the starting lineup today! [8/26]) 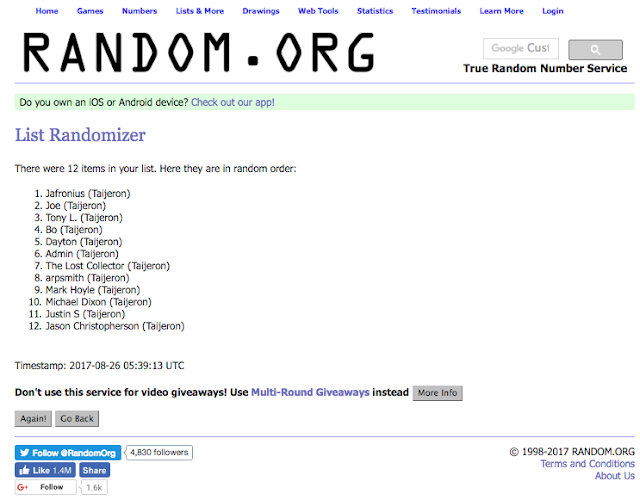 Best of luck to you 12! (If the winning number is 13, it will loop around to #1, and so on.) I don't have a prize package set aside as of yet, but I'll round up some solid cards for the winner.

Thanks for stopping by. And best of luck with your career, Travis!
Posted by defgav at 1:07 PM