I completed the autos available in the 2016 Cryptozoic Ghostbusters set last year, and I've since been getting "extra credit" by adding autos of cast members who weren't included in that set, and sprucing them up with custom overlays. The latest is Kevin Dunn. He played psychic Milton Angland, a guest on Peter Venkman's TV show at the beginning of Ghostbusters 2, predicting the world will end on New Year's Eve. It wasn't a big role, but hey, I think he got more screen time than some of the dudes who had autos in the official product (such as Larry King and Ben Stein), so this isn't that much of a stretch. Dunn has 100+ acting credits under his belt since his career began way back in 1986. He's had guest spots on classic shows such as Cheers and Seinfeld, as well as been a main cast member on Samantha Who? and Veep. 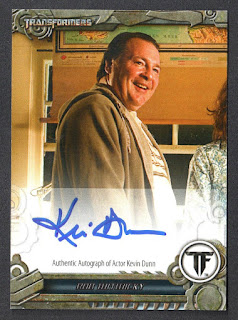 He also played Shia LaBeouf's dad in the first few Transformers films, and that's where this certified auto underneath comes from.

The base set in the Cryptozoic trading cards covered the events of the first Ghostbusters movie. "But what about Ghostbusters 2?," you may ask. Well, Topps put out a set for that back in 1989. I had been dragging my feet on rounding that one up, but... For $5 shipped, I recently picked up a near-complete set on eBay. (Seller sent them via Media Rate, which I'm pretty sure isn't allowed for trading cards, but whatever.. they eventually arrived safe.) The '89 set also got paid tribute to with a reprint card in the 75th Anniversary product Topps put out back in 2013. I picked up this foil parallel of the card shortly after seeing it in a post on SCC/POMP. (I also threw the base version into my COMC inventory, though I don't have that one in hand yet.. waiting till I hit 100 cards ready to ship to hit the bonus, only a third of the way there so far.) Keeping an eye out for the other parallels, though they seem to be pretty scarce.

Rumors are a Ghostbusters 3 film is finally in production, penciled in for release Summer 2020. I'm cautiously optimistic for it, but wouldn't be surprised if it falls through (or comes out but sucks hard). But fingers crossed!