Fred Willard is the best

The other day I realized I frickin' love Fred Willard. If I'm watching something and he pops on screen, my day instantly improves. The living legend turns 80 today, and so I figured I'd pay a little tribute to him by showing off this autograph I picked up recently.

Yeah, as I say, I had a revelation that Fred Willard is the man a few days ago, and so I checked on eBay to see if he had any autograph cards on the market. Turns out, yes, he's got autos in 2017 Leaf Pop Century which can be found at reasonable prices, so I snatched one up. I thought briefly about making a custom overlay for this stickergraph-- likely featuring his character travel agent Wally Kogen from the 1999 Simpsons episode "Sunday, Cruddy Sunday"-- but ultimately decided the photo Leaf used was nice enough.


He is best known for his roles in the Rob Reiner mockumentary film This Is Spinal Tap; the Christopher Guest mockumentary films Waiting for Guffman, Best in Show, A Mighty Wind, For Your Consideration, and Mascots; and the Anchorman films.

Never got much leading man work, but his minor roles always elevated whatever he was in. He's done guest spots on Get Smart, The Bob Newhart Show, Laverne & Shirley, The Love Boat, Mama's Family, The Golden Girls, Married... with Children, Family Matters, Murphy Brown, Roseanne, Friends, The Wayans Bros., Mad About You, and a ton more. I could copy & paste more highlights, but it's too much so just check his wikipedia entry if you want. 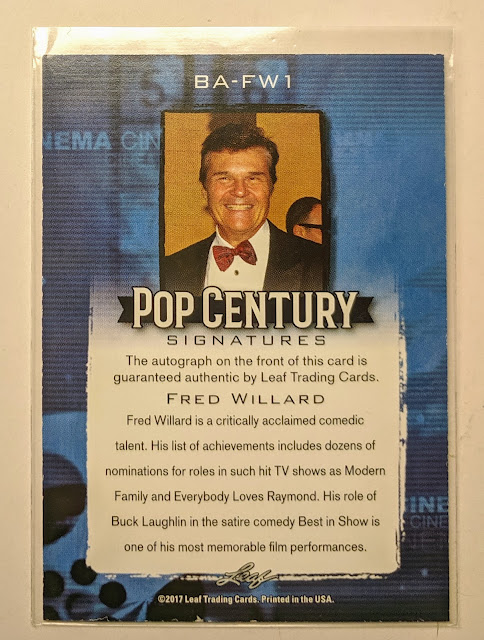 Great to get him into my card collection.
Happy Birthday, Fred!
Posted by defgav at 8:52 AM