Here's my usual blogging process:
- "Oh man, I haven't posted anything in a while.. I should work on a post."
- "How about working on one of those big drafts where I need to do some research, get several images, and will be time-consuming?"
- (beat)
- "Nah, let's just show off a recent pickup or two and call it good."
- (repeat) 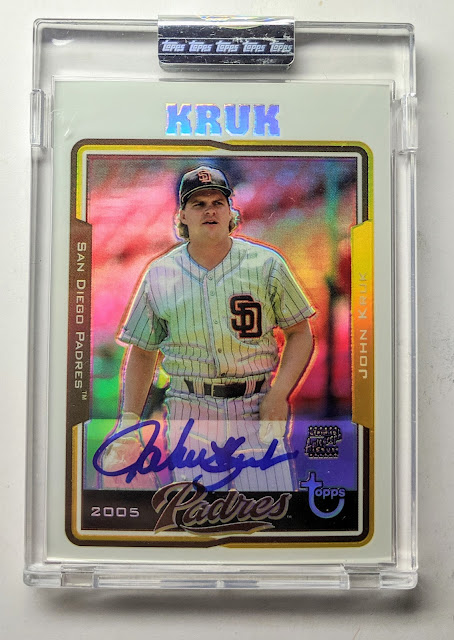 Here's a beautiful card-- Or at least as "beautiful" as a John Kruk card can be. LOL. This was another instance of me "upgrading" a base auto I had from Topps Retired by scoring a refractor auto parallel. This one had been on eBay for a while, and with motivation from an eBay Bucks promo, I finally pulled the trigger on it. John Kruk is a fun dude to collect, with his everyman physique and the fact his was more of a "character" than a typical ballplayer of the era. And it's cool for me that he's a former Padre (and pictured as such of this 2005 Topps Retired card), though he had already been swapped to Philadelphia by the time I was really following baseball. 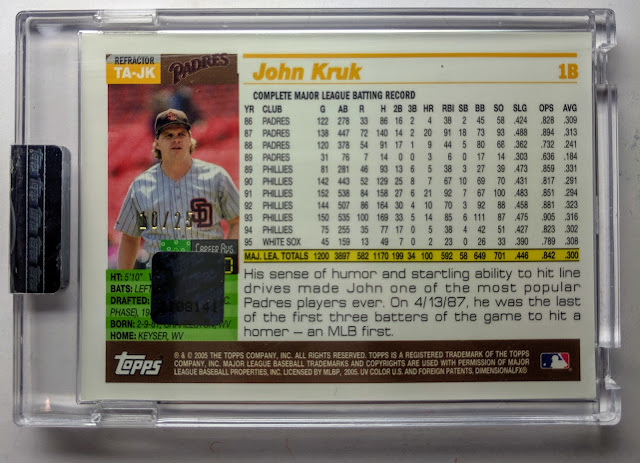 Pretty solid career. I like the story where he decided to retire right after getting a hit that brought his lifetime average up to an even .300. You gotta figure he could have stuck around a bit longer if he wanted. These cards typically feature a different photo on the back, but looks like Topps was lazy here and just reused the same picture from the front. But still, cool card. 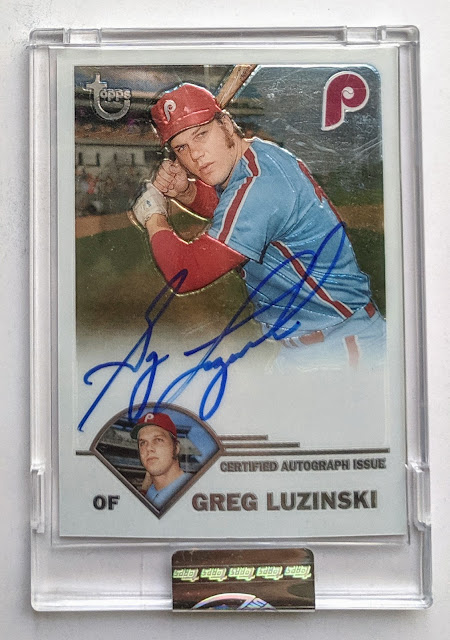 Like Kruk, Greg Luzinski was a working-class ballplayer best known for his time in Philadelphia and who finished his career with the White Sox.

Part of the reason I snagged this one is I got a kick out of it being upside down in the case. I know Topps goes "sticker end down" sometimes, such as with eTopps cards, but very rarely do you see it with Topps Retired cards. 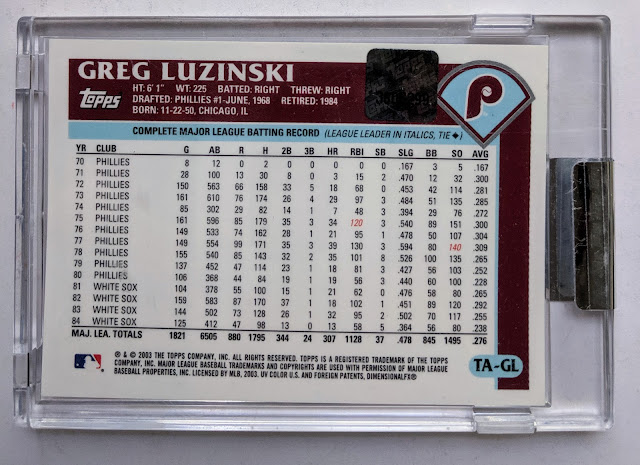 The Bull was (a distant) second to Joe Morgan for NL MVP in 1975. Again runner-up for MVP to the Reds in '77, when George Foster took home the trophy. Got a ring with the Phils in '80. 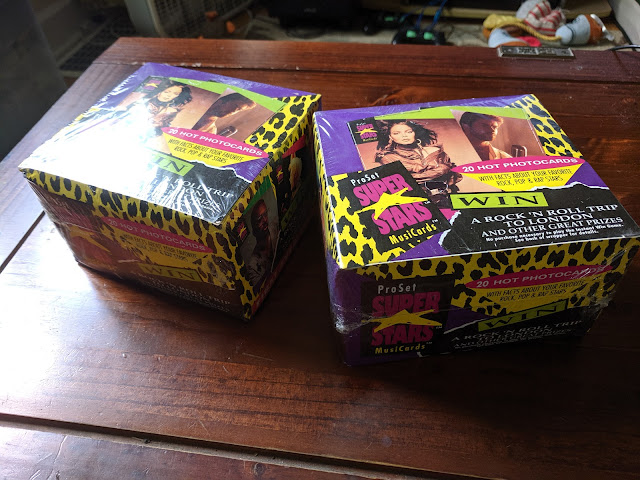 Had a little box-break this past weekend. Picked up this pair of unopened 1991 MusiCards shipped for about the price of a blaster. Yeah, maybe seems like a nuclear option when I only needed 27 more cards to complete the base set. But other than Night Owl and Rod, I haven't had much luck trading for these cards. And non-sport cards aren't available on Sportlots (where is the Nonsportlots? lol), so with trying to pick up the cards I need here and there from the likes of COMC and eBay, and the shipping costs involved.. yeah, buying a couple cheap boxes would likely turn out to cost about the same as hunting down 27 singles, plus going the box route gives me some fun ripping time. Even got the ever-so-rare opportunity to get my wife involved in the hobby by asking her to open a pack with me. Good times.


Tom Petty goes straight into a sleeve. Should probably put this baby in a top-loader, too. pic.twitter.com/Lmf4xwOEdL
— Baseball Card Breakdown (@breakdowncards) September 21, 2019


Happy to report that the first box included all 27 cards I needed to complete my base set. Now just a handful of variations, promos, and inserts to track down to finish a "master set". I'm keeping the 2nd box sealed for now, but still may end up busting it at some point, mainly hunting for the hologram insert. (Pro Set liked seeding one special hologram card per case or so.. I believe they also did this with their football cards.)

If anybody else happens to be working a set of MusiCards, I've got plenty of dupes now, so let me know. (Setblog for 1991 MusiCards is still on track to kick off next week!)

One last thing for today... 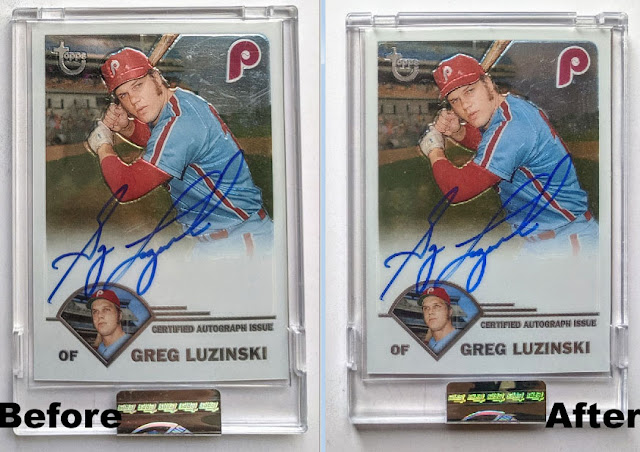 Fuji turned me on to this Novus stuff for getting out scratches on plastic. While I wasn't able to get it perfect, I scrubbed down the Luzinski for a few minutes and definitely improved it. Specifically around the Phillies logo in the corner, you can see many of the scratches came out. Again, not quite a miracle worker, but the case looks noticeably better after treatment. Now I'll have to go through all my other encased cards and see if I can polish up some of the scuffed ones. Thanks again, Fuji.

And so ends another post. Thanks for reading!
Posted by defgav at 11:15 AM