The Return of 1993 Topps Black Gold

I've mentioned on the blog before that I'd probably consider 1993 Topps Black Gold cards to be my favorite inserts of all time. I pulled a Frank Thomas back then as a kid and felt like I had won the lottery. Just awesome looking cards.

And I've expressed hope for the design to pop up in Archives, thinking it'd be cool to see current players (and perhaps greats from the pre-93 past) on the cards.

Well, that hasn't happened yet... but.. Topps brought the design back for a Throwback Thursday set recently. I was on the fence about it at first-- not too hot on the player selection of the 6-card set-- but ultimately I pulled the trigger (price of a blaster), drawn in by that classic design. 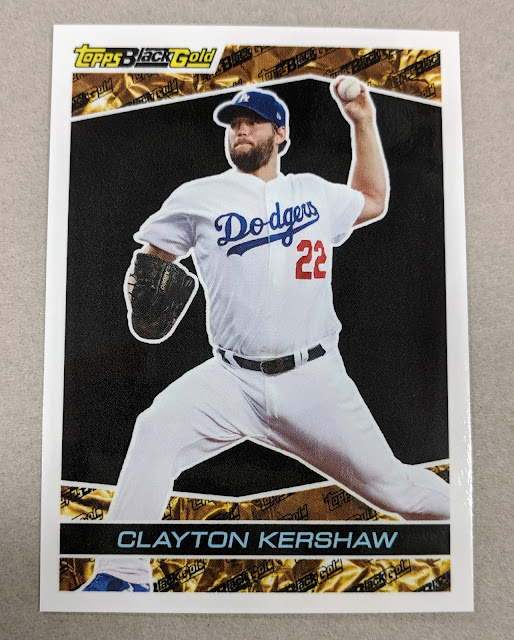 I'm giving Kershaw top billing even though he's the 2nd card in the set. Out of the six players in this set, he's the guy I collect the most and I suppose the card I was most interested in getting. But that's not really saying much. It's basically a "finished" PC for me. It'd be nice to score his rookie card someday, but otherwise I'm content with the 100+ cards of his I have, highlighted by a Christmas Card auto. That said, it's a nice card.

Oh, and I should mention that Topps crapped out on the "gold foil" parts. As I suspected when I ordered online, they just used a picture of gold foil. No dancing in the light here, just a static image. Kind of a bummer, though I would have been shocked had today's Topps gone the extra mile correct number of miles called for rather than be lazy. But that's how it goes. 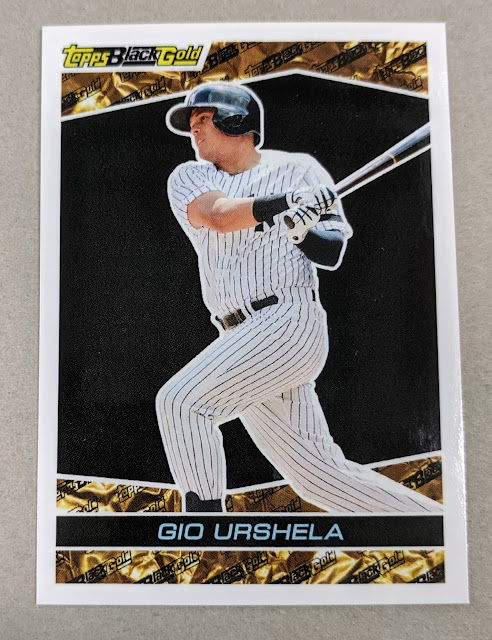 Gio Urshela isn't a guy I'm very familiar with. I think The Lost Collector did a post about him last month, and that's about the extent of my knowledge. Not even a rookie card, though. I would have rather gotta a different young New York corner infielder.. but I guess Topps can't put Pete Alonso in every small weekly set they put out. 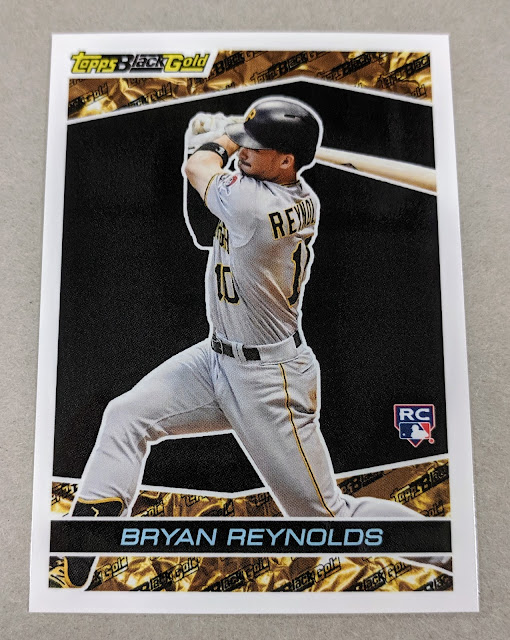 Never heard of Bryan Reynolds. Looking him up, he's quietly having a real nice rookie year. Cool. This is the only "RC" of the six cards. 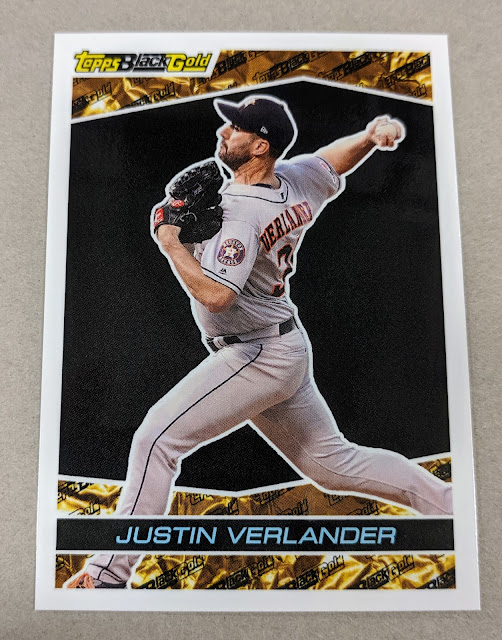 I've never PC'd Justin Verlander at all, instead sending off his cards to Dennis at Too Many Verlanders. But now that he's locking up his HOF credentials, I'm feeling some remorse. I probably should have collected him, at least a little. Oh well. Can't collect everybody, as the saying goes. But sorry, Dennis, I don't want to break up the set, so I'll be hanging onto this one. 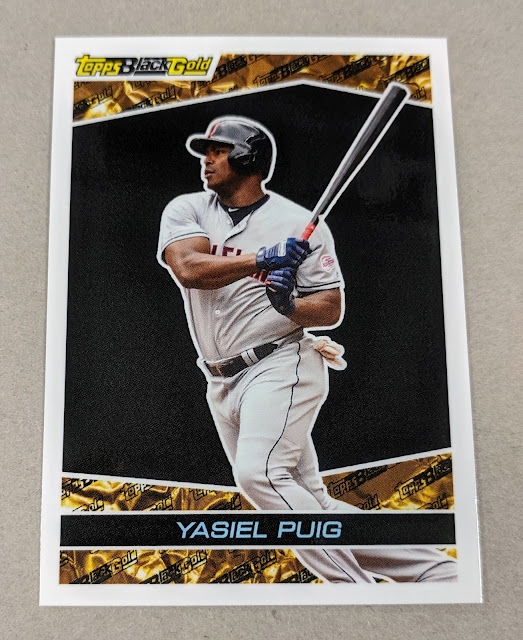 Besides Kershaw, Yasiel Puig is the only guy in this set I player-collect. He's low priority for me-- as with most collectors, I've grown frustrated that he hasn't been able to recapture that Puigmania promise he had when he burst on the scene in 2013. But he's still a solid player and a fun dude. I'm hoping he can breakout for an MVP-caliber season one of these years. 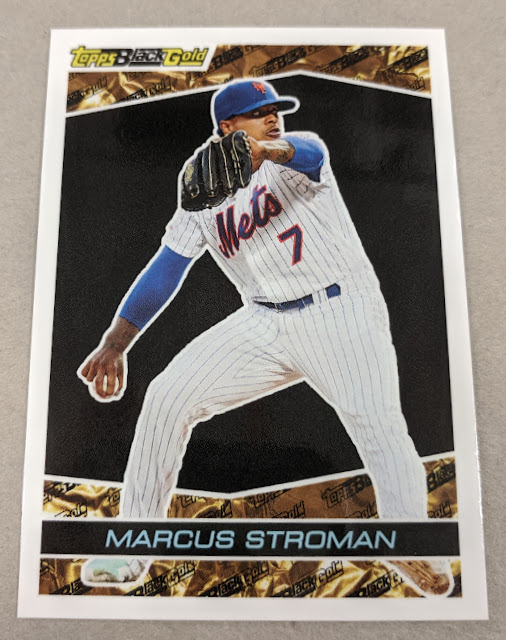 Last card is Marcus Stroman. I don't have much feelings on him one way or the other. Seems like a good guy.

Like with all #TBT cards, not much time was spent on the backs. Same picture from the front. Generic blurb.

Notice the mistake here? "Black and Gold"? Often feels like the people who work at card companies aren't actually collectors themselves, rather just graphic designers and manufacturers or whatever.

Speaking of that.. Did you hear Sooz is leaving Topps? That's a bummer. As I told her, it was cool having "one of us" on the inside. She started as a cardblogger, then went to work for Beckett, then got a job at Topps. Not sure what's next for her, but I wish her the best.

Back to this set, yeah, it's fine. No regrets picking it up, though it could have been a lot better. Wish they had used real gold foil like the original cards, for one thing. And would have loved some more exciting players... Tatis? Acuna? Guerrero? Trout? Bellinger? Yelich? Alonso? Gleyber? That rookie on the Reds who hit a dozen homers in a row? All guys I would have rather been in the set.

Looks like the print run was 362 sets, which is on the lower end of these weekly sets from Topps (they often top 1000), probably due to the uninspired checklist with a lack of hot rookies and superstars. But on the other hand, at least the cards are kinda scarce. So there's that, I guess!


Thanks for stopping by and have a great weekend.
Posted by defgav at 4:06 PM