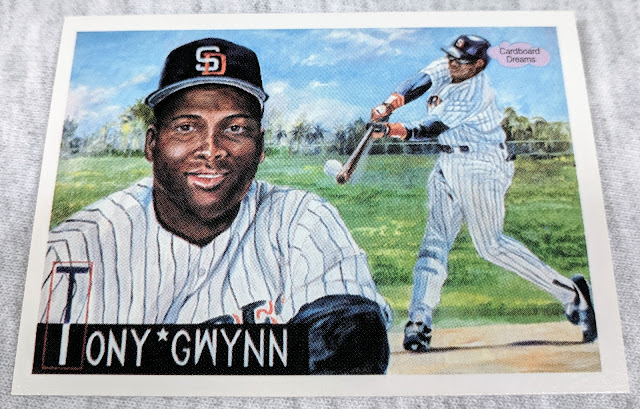 It wasn't till I was in my 40s that I discovered frozen grapes. Frozen grapes are incredible! They're like funsize popsicles. I encourage you to get some grapes (either green or red, as long as they're seedless), rinse them, freeze them, and then snack on them. The natural sugar in them keeps them soft when frozen. Man, oh man; good stuff! 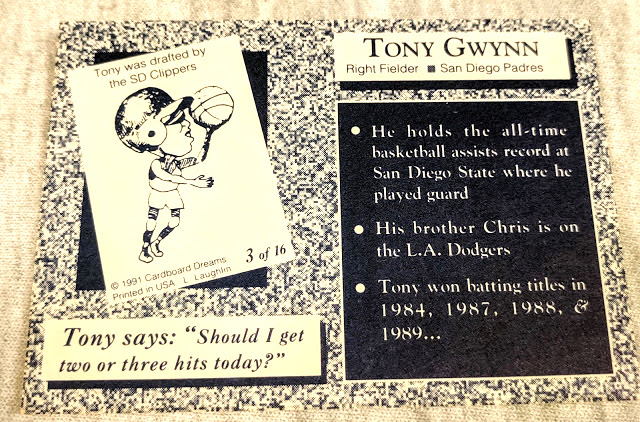 Tony was drafted by the SD Clippers! It's true!! He was an incredible athlete.

With the NFL season starting up, I'm saddened by no longer having a football team to root for anymore. The Clippers left San Diego before I was following sports, so I never had to be heartbroken about losing a basketball team, but I often wish San Diego had an NBA franchise while I was growing up. I never had a fighting chance to get into basketball.

Anyways, I love that doodle of Tony bi-sporting.

- "He holds the all-time basketball assists record at San Diego State where he played guard."

Tony Gwynn still hold SDSU's all-time assists record. His 590 is comfortably #1, plus he's in the top 10 for career steals, too. [https://en.wikipedia.org/wiki/San_Diego_State_Aztecs_men%27s_basketball]

Chris Gwynn later went to the Royals for a couple years, then a double dip with the Dodgers for a couple more years, than to San Diego to finish his career with a season alongside his brother. Chris didn't have the success Tony did, but still had a respectable career.

Lest you think Chris rode Tony's coattails to baseball attention, did you know Chris was originally drafted by the California Angels in the fifth round of the 1982 draft (didn't sign), a month before Tony made his MLB debut.


On September 29, 1996, in the final game of the season, Gwynn hit what would prove to be the game-winning, two-run, pinch-hit double in the top of the 11th inning against Los Angeles Dodgers pitcher Chan Ho Park to complete a three-game sweep of the Dodgers and clinch the Padres' second National League West division championship in team history. It was the final at bat of his career. [https://en.wikipedia.org/wiki/Chris_Gwynn]

Hey now... I don't think he really said that, did he? LOL 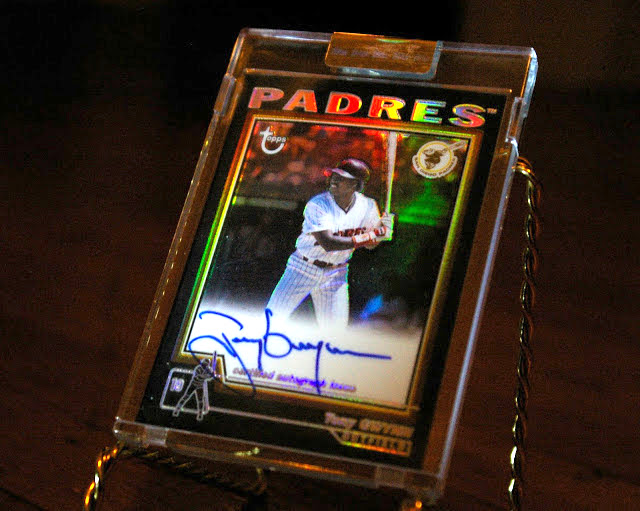 This is my favorite Tony Gwynn card. It's a refractor auto from 2004 Topps Retired. I would take a bullet for it.

And below is the most recent addition to my Gwynn PC... 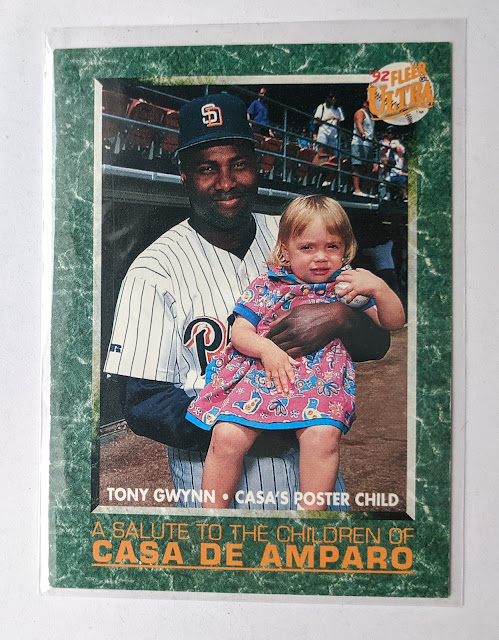 If you wanna get technical, this is an upgrade. I've had a copy of this card for a long time, but my old one isn't in as nice of shape. 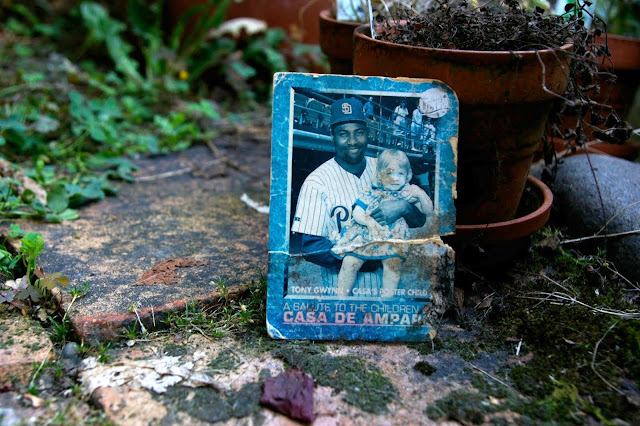 Actually, this above photo is from 2013; it's looks even worse today! 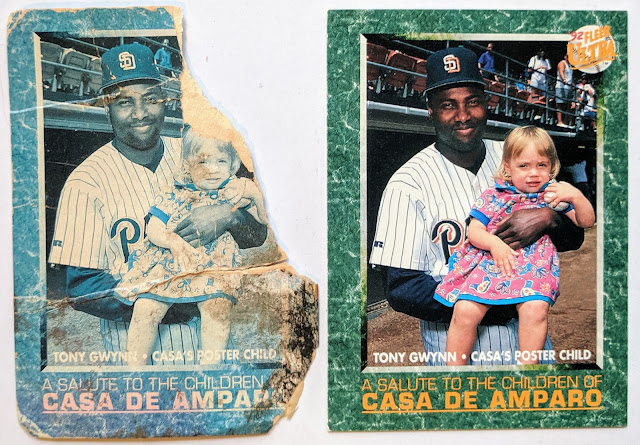 Here's the side-by-side. That's my "lucky card" that I've kept in my car since the 90s. It used to reside on my dash around the turn of the millenium, but over the years retired to a simpler life in my glove compartment. 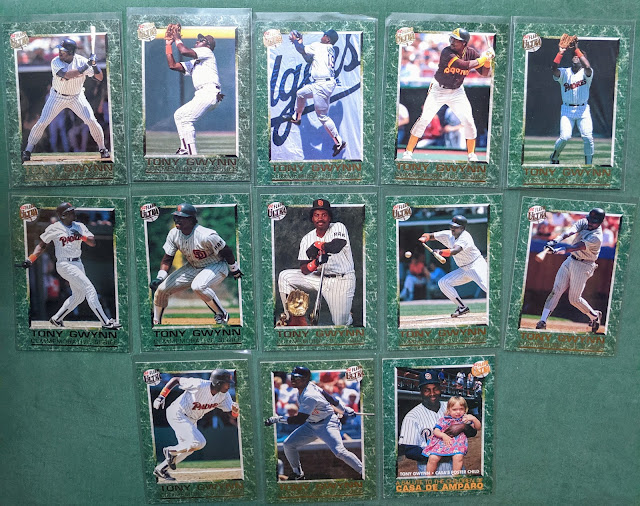 Feels good to wrap up this sweet tribute set I remember chasing as a kid in '92. The card I needed to upgrade (Casa De Amparo) is a promo that was not available in packs. 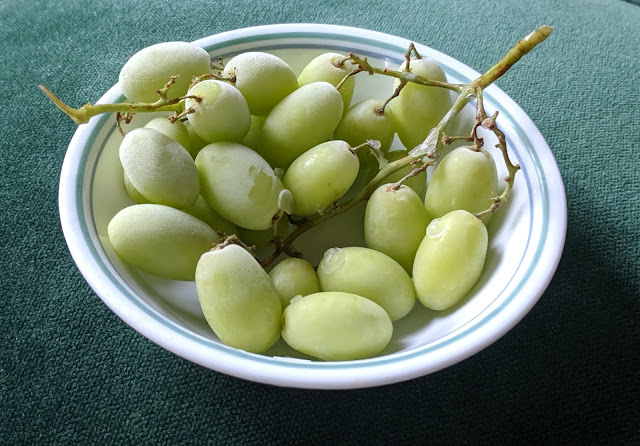