"And liquorfractors are also on my shortlist of all-time favorite parallels. Someday I'll seriously work on a frankenset of sparkly 2011 Topps parallels."
- me back on the 4th of July, 2015

In the ensuing 4+ years, I did in fact get serious about such a franketset! I really like the 2011 Topps design, and thought it looked especially nice in the various parallels Topps put out, especially the cognac parallels-- colloquially referred to as "liquorfractors" by many folks on the cardsphere. So I set out to complete all of Series 1, Series 2, Update, and Chrome from that year, all in parallel form. Could be any parallel, but one card of each number.

One particular card made this quest a tricky one. And it has steadily risen in price since I first started kicking around this daunting collecting idea of mine.

As I mentioned last month, I recently got a nice raise at work and was looking for a big card to celebrate my success. Hey, I was unemployed for a long time, applying to hundreds of jobs, many of which I would have been perfect for, but couldn't even get a phone interview. Rough times. Feels good to finally be locked in with a great job that values me and compensates me nicely. So I like to play it up big and toast myself when raises and bonuses come in. 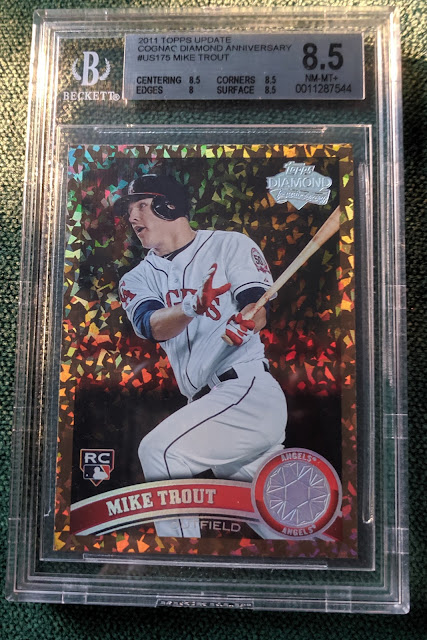 I don't know if you've checked out sales of this card over the past couple years, but it's a lot! 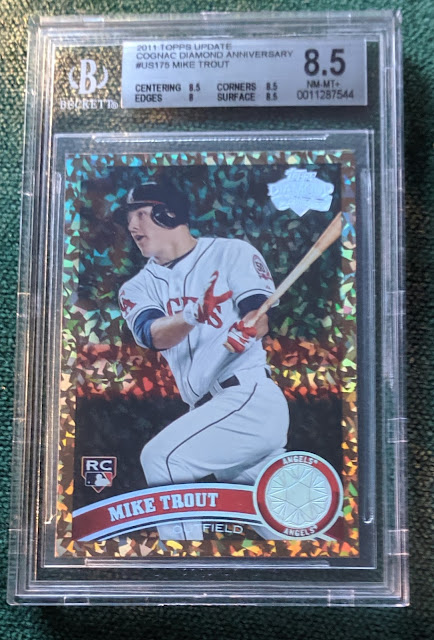 Cost me a bit over 1k. But there was an eBay Bucks deal running, so I'll be getting a $100 rebate to use on eBay come the next payout, bringing my total spent effectively down into 3-digits. 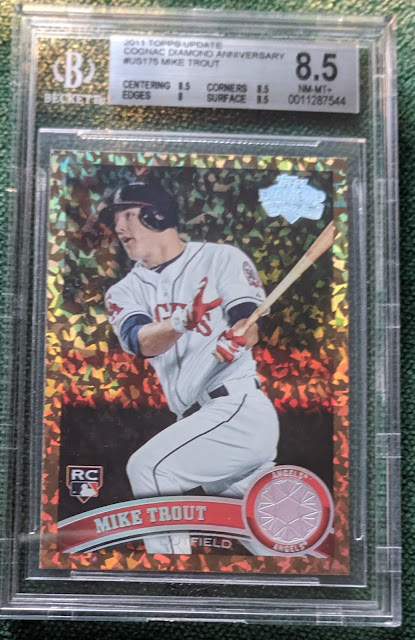 The only other time I spent this type of cash on a baseball card was the Roberto Clemente autograph I scored earlier this year. 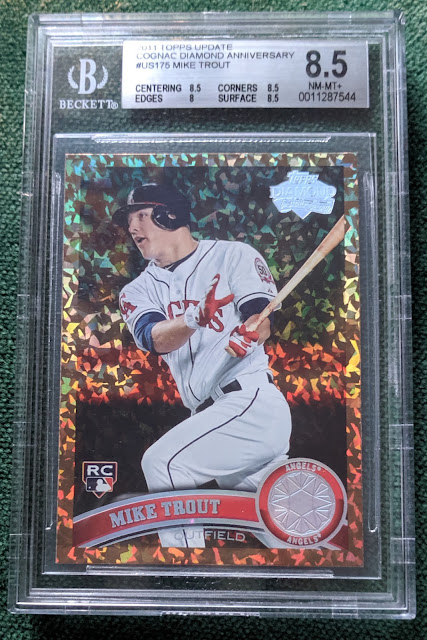 But hey, I needed it for my frankenset. Plus Mike Trout is one of my favorite players and this card keeps on getting more iconic with each HOFer he passes on the all-time WAR list. 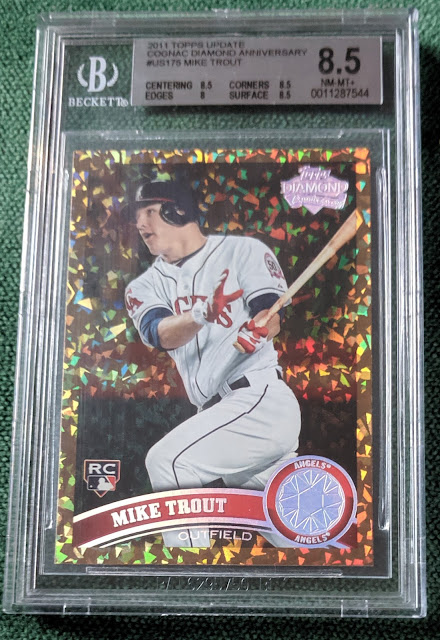 But honestly, I don't think of this card as an investment. I think it's probably at its ceiling now. As the years go on, baby boomers die out, baseball becomes less popular, scandals and counterfeits chip away at the hobby... I don't see this card raising to much more than I paid for it. (Though I wouldn't mind being proved wrong and see it climb higher.) 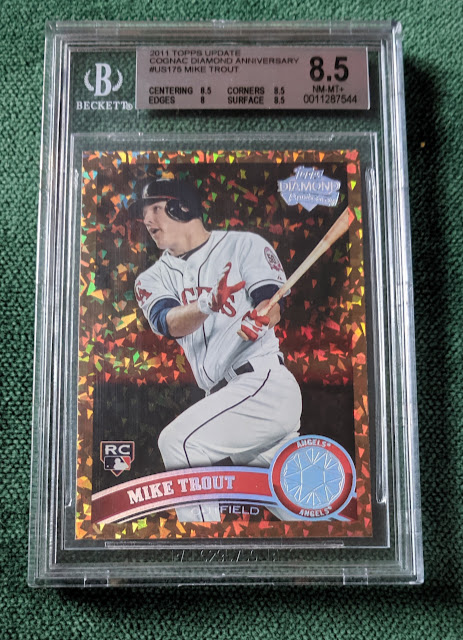 But I hope it at least holds its value. Let's just hope Trouty doesn't suffer any devastating injury or otherwise somehow see his card prices plummet.. something like a PED revelation or smacking up his wife.. but that would be very out of character for him, so that'd be a shocker. 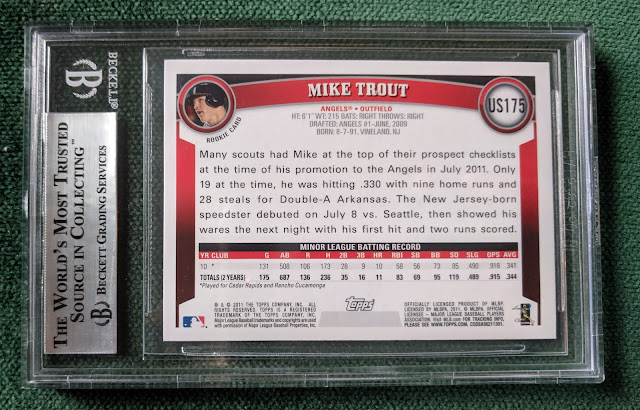 Here are the subs and my thinking behind each:
Centering 8.5 - a little miscut top to bottom.
Edges 8 - very minor crimping on the bottom edge
Corners 8.5 - normal wear
Surface 8.5 - a little holofoil loss in the Topps Diamond Anniversary logo

Oh, and you bet your ass I was concerned about trimming. Spent a lot of time holding up other cognacs to it making sure size was the same. I took a high-resolution scan of the card and some cognac commons and took some digital measurements. I'm happy to report that my findings support the outcome of this card NOT being altered. Not that you can ever be 100% sure unless you pulled it out of a pack yourself, but I'm not worried about this card being meddled with.

I actually got this card last Saturday..so I've been sitting on it for a week (though I did let some hints out, so at least a couple readers figured it out).

Sidenote -- I was anxious for the card to arrive that day.. basically pacing back and forth waiting for the mailman. Finally, he came by and dropped off the mail and walked away. To my dismay, the card was NOT in my mailbox. No orange slip or nothing! I made a bit of a ruckus clanking my hand around in the box feeling for the phantom package, or at least an orange slip. The mailman heard me at the next house on his route and called over to me saying like, "Oh yeah, I've got a package for you with signature required. I can come back around. Will you be around later?" Of course I screamed "Yes!!" like a demon possessed. More pacing, trying to wrap my head around why the mailman didn't knock on my door asking for a signature, or at least left me an orange slip for the package. What if I hadn't caught him when I did?! FINALLY he comes back with the package and a slip for me to sign. Turns out he hadn't realized a signature was required when he left his truck so he didn't have a needed slip. We also had a little chat. He caught on that most of the packages I receive are baseball cards. He told me he used to collect in the 80s, and went on to tell me about how he bought a box of 1986 Topps once (or was it '85 Topps?) and collected a lot of the big rookies of the time. But then the bubble burst and the PED stuff sucked the value from the likes of his Bonds and McGwire rookies, and I guess he left the hobby after that. Fair enough. But it's a fun hobby if you love it.

Anyways, back to the reason I waited a week.. on the same day I bought the Trout, I also decided to hit Sportlots to pick up some more needs for my frankenset. I was sitting at like 48% complete and wanted to get over the halfway mark for when I updated my spreadsheet with the Trout. So I had to wait an extra week for the two Sportlots orders to arrive. 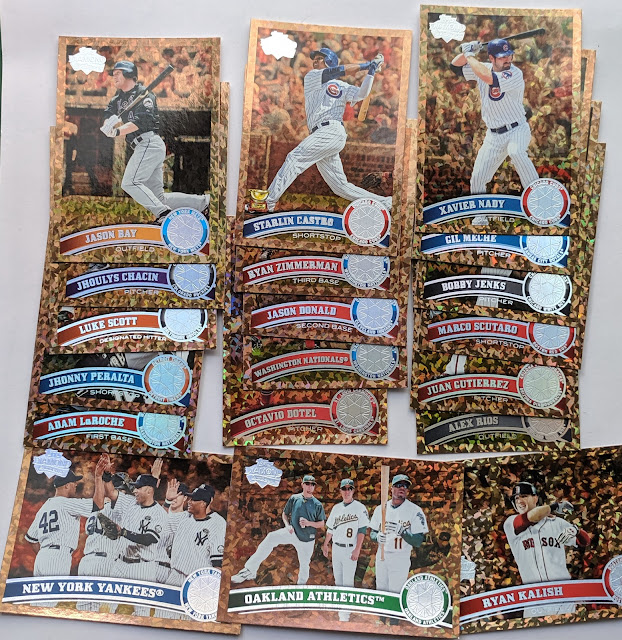 Bunch more cognacs. These were all the 18¢ Sportlots minimum. Surprised to find that Yankees team card (with Jeter high-fiving Mariano) so cheap, but I'll take it! 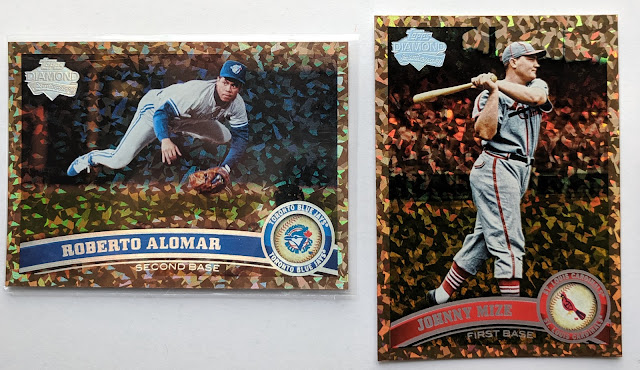 Got a couple Legends variations I needed, too. These ran me a buck each. 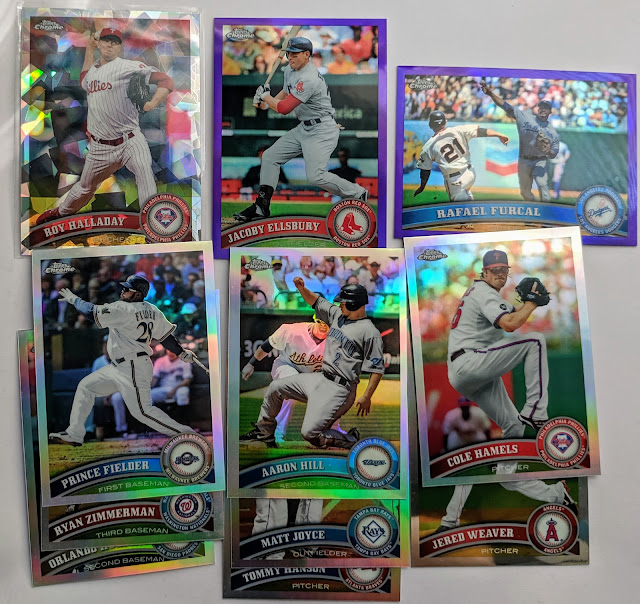 Some refractors for the Chrome part of my quest. I think the Atomic Halladay was a buck, the purples a quarter each, and the rest the minimum. I try to stick to shiny parallels when possible, but when I ran out of needs from one particular seller I was getting most of these from, I looked for some Walmart Blue parallels and added a bunch for the minimum without much extra postage.

I am now up to 52% complete with this project! Wow. Yeah, it's a long-term thing. Feels good to both be over the hump and get the big one taken care of. As far as other high-dollar rookies coming to mind, I already have Rizzo and Goldschmidt. I think my biggest need now is now the Altuve RC. Also need the Freddie Freeman Chrome RC, though I've got the flagship Freeman.

Can you help? You can check out my 2011 Topps parallel frankenset spreadsheet to see what I've got and what I still need. Just let me know if you can hit some missing numbers for me and hopefully we can work out a trade and get me further along with this crazy undertaking.

As for my Cognac Trout. It's getting some choice display time at my desk at work... 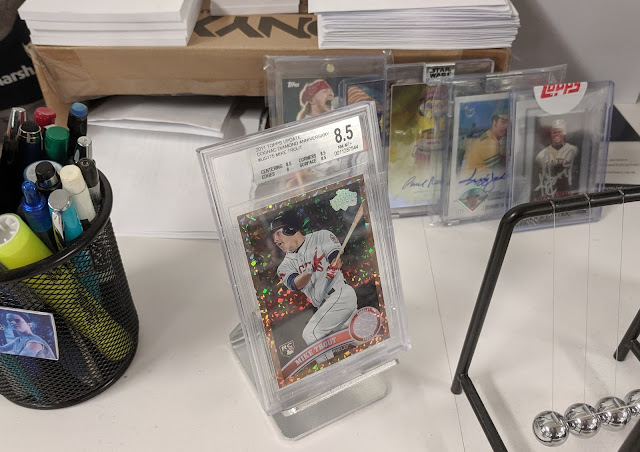 I've mentioned before that I work in a secure room that not many people have badge access to, plus there are several security cameras, so I rest easy knowing it's safe there for now. When it finally gets burned into my memory and I'm ready to stop displaying it, it'll likely go to the family safe deposit box for storage. But I bet it's gonna take me a long time to get sick of looking at it. Great card, right?!

Anyways, thanks a bunch for reading.
Posted by defgav at 1:45 PM