got a Mickey Mantle autograph!

Regular readers of the blog might know that the past few Christmases I've asked for high-end boxes of cards for Christmas from my mom and mother-in-law, who are both nice enough to throw some real money at my silly hobby despite their better judgement. Ripping results have been mixed over the years, with some duds but also some nice Trouts.

This year, I'm a little tired of Topps and the state of modern cards in general, so I decided to keep cards off my Christmas/Birthday wishlist. My mom gave me a fat check, and although I technically made the purchase before the check was deposited, in my mind I'm considering the card a gift from her, putting the majority of the check towards a "dream card" for me. A 1992 Score card, if you can believe it. 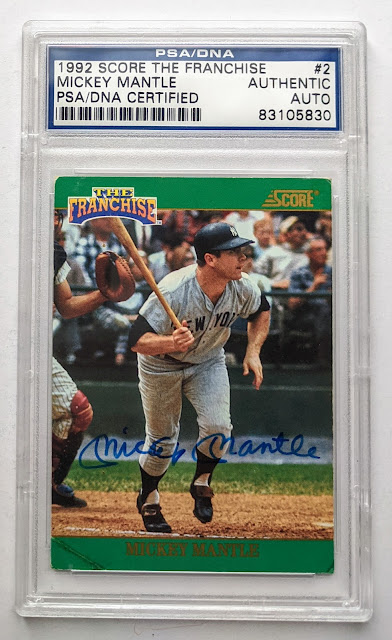 Oh man, I love this card.

In the past few months, I decided I wanted to try targeting a Mantle auto one of these days, and started keeping an eye out. As far as pack-certified, on-card autos from the time before The Mick passed, the two best options available are the 1994 Upper Deck painted card he shares with Ken Griffey Jr, or his insert in '92 Score. Seeing as I've never been a huge fan of mass-produced art cards (that Mantle/Griffey included, sorry), I gravitated towards '92 Score. And well, this one had its BIN price creeping down over the past few weeks. Add an eBay Bucks offer to take some more sting out of it, and I ended up pulling the trigger.

In watching such cards over the past few months, I noticed many of these '92 Score Mantles feature a signature that is very faded. Gotta assume it's due to the ink being susceptible to fading in sunlight and the fact that many owners of these cards proudly displayed them for all to see, which eventually caused the signature to fade over the years.

But this one still looks good! I'll have to resist the urge to display it, at least anywhere bright, so it'll maintain the bold, blue signature from Mickey, deftly placed in a lighter area of the photo to help it pop. 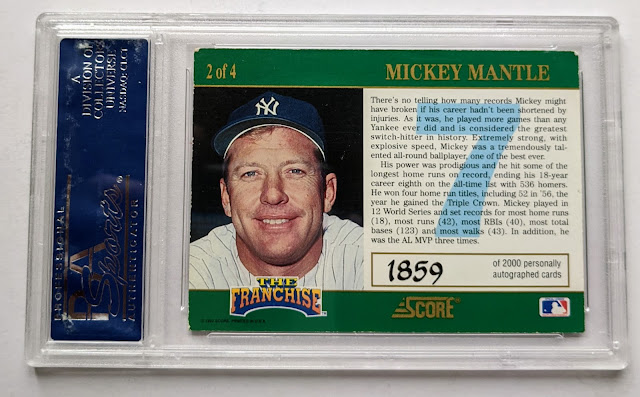 Numbered 1859 of 2000 personally autographed cards. I didn't have much luck attaching an "eBay 1/1" meaning to this particular number, but the best I can do is that the year 1859 saw the first intercollegiate baseball game ever played. Oh wait-- here's one: old-time baseball HOFer Mickey Welch was born in 1859. Mickey W. was a New Yorker.. so that's kind of fitting. (Of course Mantle was named after Mickey Cochrane, not Welch, which would have been cooler, but still.) Yes, it's the Mickey Welch Birthyear eBay 1/1! That's twice the Mickey!

If you factor in all the faded autographs (seems like roughly a third of them have significantly faded), this becomes even more scarce as far as viable Mantle autographs go from 1992 Score.

This particular card was priced very competitively, no doubt thanks to being in less-than-mint condition, particularly the corners, including a crease. But honestly, the condition only made me want it more. Let's imagine a likely backstory of this card based on its condition...

December 25, 1992. Little Timmy Jones receives a few packs of 1992 Score in his stocking from Santa. But Timmy is more interested in the Super Nintendo Entertainment System that Santa left under the Christmas tree. By early January 1993, Timmy eventually beats Super Mario World and is looking for something else to spend his time on. Little Timmy pulls the '92 Score packs out of his closet and begins tearing them open. He's thrilled to pull cards of his favorites Ken Griffey Jr and Jeff Bagwell.. even a special card of some old dude he heard his dad talk about once or twice. Timmy wants to give it a closer look, but a new Darkwing Duck episode is about to start and so he throws the cards into a box with with other cards for the time being. Cut to a few weeks down the line. Timmy gets a copy of A Link to the Past (Zelda 3) and pretty much forgets about those baseball cards.

Many years later, after Timmy has gone off to college, his mom wants to tidy up the house a bit and gathers up some old stuff Tim surely wouldn't have use for any longer. Among a Battleship game and a few TMNT figures is the shoebox with the baseball cards. She makes a Goodwill run, where an employee tosses the cards into a ziplock bag and slaps a price tag on it. A week later, local man Joe Smith is sorting thru the lackluster options at his local Goodwill when he finds the lot of junk wax for $5. While the price is a little steep for some near-worthless cards bouncing around the ziplock bag in rough shape, Joe notices a Griffey "Rated Rookie" visible through the bag and figures there might even be an early Jeter or something in there too, so he takes a chance and ponies up a Lincoln for the lot. Later that day, while quickly flipping through the cards-- taking out the likes of Nolan Ryan and Cal Ripken while tossing the rest-- Joe is frozen in his tracks when he comes to a card of Mickey Mantle that seems to be autographed. "Holy crap! This can't be real, can it?!" Joe talks to a buddy of his who is a little more knowledgeable about the hobby. Joe isn't sure what he's found.. is it even real?? His friend suggests he send it in to be graded by PSA, notable authority on card grading. Joe sends in the card, and a few weeks later, it comes back with an "authentic" grade. Wow!, Joe thinks. He puts the card away with his few other good cards and goes about his life.

A few years later, Joe wants to raise a couple hundred bucks for a Nintendo Switch and decides to list some of his cards on eBay. While browsing newly-listed Mantles on eBay, a guy named Kevin Johnsen notices the card and snatches it up to flip. A few weeks go by and Kevin puts the card back up on eBay. It doesn't sell at his original asking price, so he eventually lowers the price a few bucks.. and then a couple weeks later, hoping to move the card by Christmas, he lowers it a little more.. then boom, some schmoe in Portland, Oregon pulls the trigger on the card, embiggened by a birthday check from his mother and a generous eBay Bucks promotion, achieving his dream of owning a Mickey Mantle autograph. 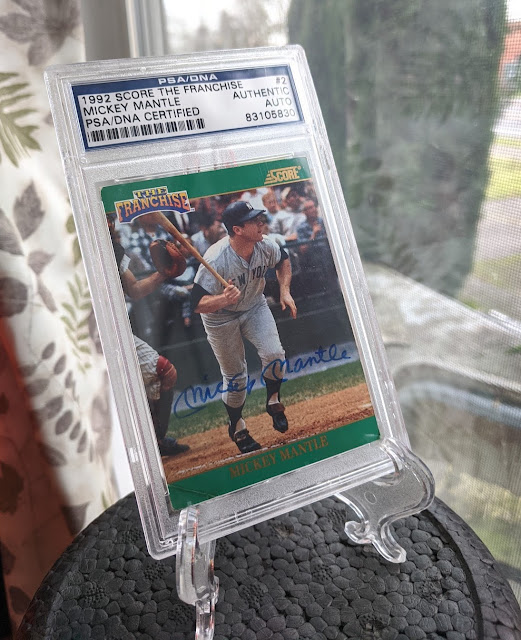 And so here we go. I've got a slabbed authentic pack-pulled Mickey Mantle autograph. Wow.
The beat corners only add to the appeal in my eyes, drastically lessening the likelihood that it's counterfeit or trimmed, and you can tell it's got a story to it. Just beautiful.

A dream card, no doubt! Thanks for reading.
Posted by defgav at 3:40 PM