I've got some quirky avenues of my collection, and one of those is my "Christmas Card collection", which despite the name, isn't Santa cards and stuff like that, but rather any card serial-numbered 12/25 (or 12/24). I've been at it for a while now, with over 200 different such cards. This minicollection debuted on the blog 6 years ago, and I figured a look back at the inaugural class was in order.

I started this blog back in spring of 2013. Later that December, I thought I'd celebrate my then newfound love of cards serial-numbered 12/25 with a series of 12 consecutive posts featuring a different card taking center stage (--the old "12 Days of Christmas" shtick). It turned out to be a lot of work and loaded a bunch of stress onto an already stressful time of year. Plus, the posts didn't even get much traffic so it ended up feeling like a dumb undertaking on my part. LOL. No regrets, but let's say it was a learning experience. (Specifically: a post-per-day blog series is a bad idea, especially in mid December.)

This year, Topps began including variations into their Walmart-exclusive holiday cards that feature silly holiday imagery photoshopped into the pictures of ballplayers on the field. Well, not to toot my own horn, but I was doing that back in 2013 for my 12 Days of Christmas Cards series of posts.

In the spirit of these fun variations, let's revisit the altered holiday cards I made back in 2013. I'm not claiming I gave the folks at Topps the idea... but maybe-just-maybe I helped plant the seed for creating fun holiday-themed versions of their cards.

This post got zero comments. Well, I suppose just adding a simple "snow effect gif" to a card isn't all that interesting. Still though.. ouch. (The serial numbering is on the back, but trust me, this Jody Gerut auto is #'d 12/25.) 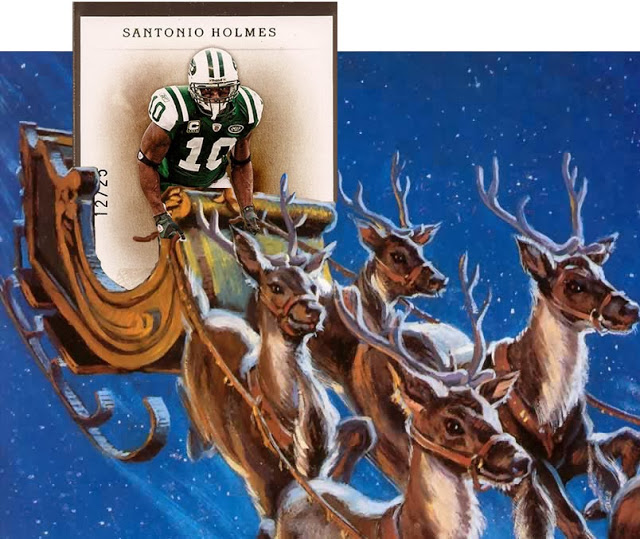 12 Days of Christmas Cards: 2nd day (Santonio Claus)
Now we're getting a little more involved. Santa Holmes is looking pretty festive here guiding his sleigh. This post only got one comment, by good ol' "petethan", a favorite blogger of mine back then who ended up stepping away to focus on some real-life drama and now only shows up once in a blue moon commenting on a Night Owl post. I always figured he'd return to blogging once things settled down, but nope. Hope he's doing ok these days. 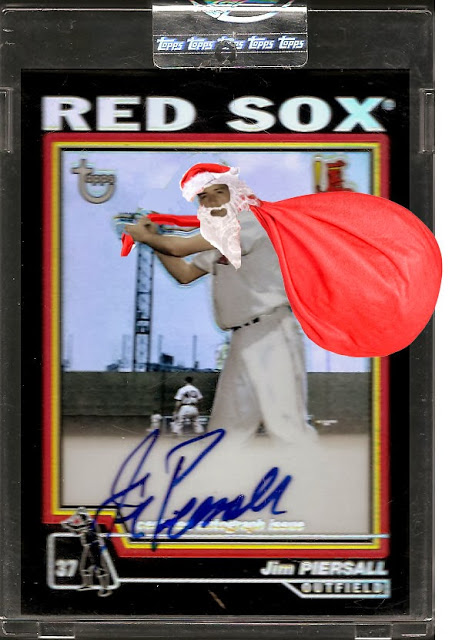 12 Days of Christmas Cards: 3rd day (The Nutcracker)
Jim Piersall as Santa with a big bag of toys over his shoulder is pretty great, if I say so myself! This was the very first 12/25 card I ever added to my collection (purchased via eBay on July 30, 2013), so it's got some added significance for me. 12 Days of Christmas Cards: 4th day (Happy Xmas, literally)
As I said back in 2013, "When I can't think of anything cool to do with a card, I either add a snow effect or slap a santa hat on the guy. Went with the latter this time." I was happy to get a Padre onto the list, especially a guy I sorta PC such as Xavier Nady. 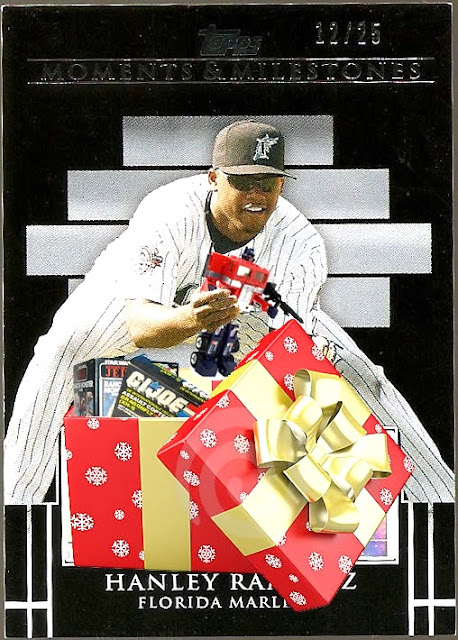 12 Days of Christmas Cards: 5th day (Moments & Mistletoe)
I thought this one was pretty neat, but looks like I was in the minority as this post got few views and no comments. Hell, Hanley was even still a relevant player at the time! *shrug* The box is filled with toys I was into as a kid in the 80s: Transformers, Star Wars, and GI Joe. 12 Days of Christmas Cards: 6th day (Wilkins Wonderland)
Look, he's holding mistletoe over his head trying to get a smooch! And there's a big candy cane over the card for bonus festiveness. Another dud of a post with zero comments. Man, not to whine too much, but it's hard to believe I even kept up with the whole blogging thing after pouring my heart into this series that was so universally ignored. lol. This post even had a cool gif of Santa dunking the card into my stocking. 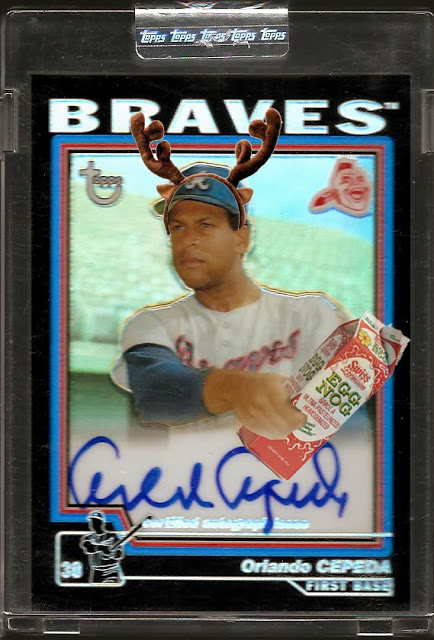 12 Days of Christmas Cards: 7th day (Orlandoly Night)
While Topps might phone it in by lazily changing bats into candy canes (yawn), I think outside the box and change bats into cartons of eggnog, haha. And the reindeer antlers are the icing on the cake. Another post that few read and no one commented on. Maybe if I was on Twitter back then I could have gotten a little traction in the card-collecting community with this stuff, but alas, I didn't start doing the Twitter thing until the following April. 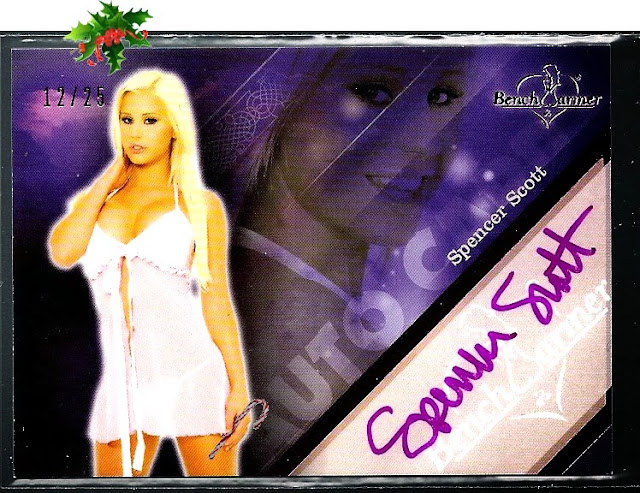 12 Days of Christmas Cards: 8th day (Girlie card! Pretty lady!!)
On the 8th day, a little sex appeal was added to the mix. Not much photoshop work on this one (I didn't have much time as I was about to DJ at a wedding reception that evening and was still working out my playlists), but there's mistletoe over Spencer Scott's head and she's holding a candy cane. I've since gotten a Benchwarmers card or two (or several) that are actually Christmas themed, no doctored photo needed. But yeah, speaking of "Collection Origins", this card essentially kicked off my "girlie card" minicollection, something I didn't really realize until looking over these old posts. 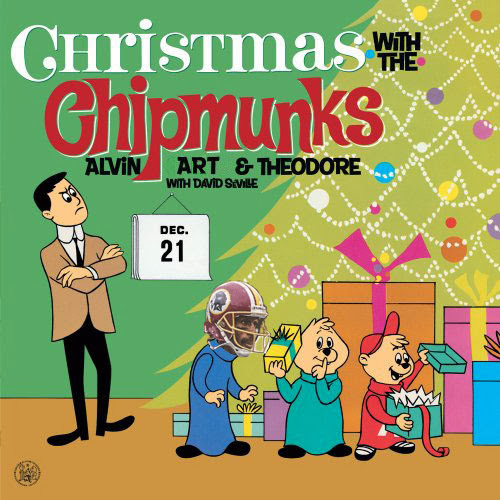 12 Days of Christmas Cards: 9th day (An Art Monk Christmas)
I went a little overboard on photoshopping this "card" in that all that's left from the card is the Art Monk head pasted into the album cover of one of my all-time favorite holiday records (--well, cassettes). I thought the Monk/Chipmunk gag was kinda clever, though it too was met with crickets where the views and comments would typically be.

12 Days of Christmas Cards: 10th day (Vida Blue Christmas)
As us bloggers know, non-baseball posts like Art Monk the day before, typically see a drop in traffic. But surely fan-favorite ballplayer Vida Blue would bring in the readers hand over fist, right? Nope, the 10th Day of this blog series got nothing either. I'm sorry to harp on it so much in this post, but I just think it's funny in a sad way how I spent so much time on these posts only to have them flop so hard. I'm grateful that I've been able to build a decent readership over the years since, and it's pretty rare these days that I don't get at least a comment or two on a new post. I very much appreciate everyone's comments, with Fuji being the clear Commenting MVP of the cardsphere.

12 Days of Christmas Cards: 11th Day (Webster Christmas Episode)
Nearly to the end now, with the 11th of 12 posts. Alex Karras (that's his face on the Santa body) was a solid football player and went on to make a name for himself as an actor with parts such as Mongo in Blazing Saddles and the dad on Webster.

12 Days of Christmas Cards: 12th Day (The Festive Finale, with a Peppermint Twist!)
Ok, this might be the coziest picture with a baseball card you will ever see. Just looking at it, I can taste the eggnog and smell the yuletide blend of douglas fir and cinnamon as the fireplace snaps in the background.

This post had a surprise bonus card-- in addition to the Ralph Kiner auto, there was also... 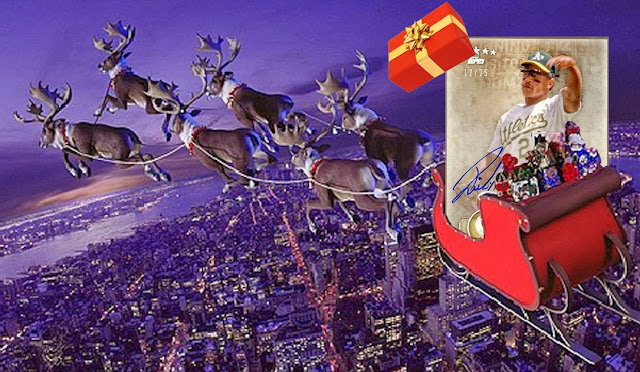 And with that, the 12 Days of Christmas Cards blog series came to a close. You're probably pretty busy right now, but hey if you've got some time to kill, feel free to check out those old posts (and even though they're several years old, don't be shy to comment on them! Better late than never. LOL)


And a bonus post...
My Christmas Card minicollection made its debut on the blog Dec. 12, 2013 in a 12 Days of Christmas Cards "Prologue" to fill readers in on what was in store. (A tip of the cap to Daniel Wilson for being the lone commenter on that post.)

In that unveiling of the minicollection, I showed off 5 cards #'d 12/25 that weren't quite interesting enough to make the cut for the main list of 12. Let's see how this initial batch of Christmas Cards has fared. (These are just as-is; no holiday photoshopping.) 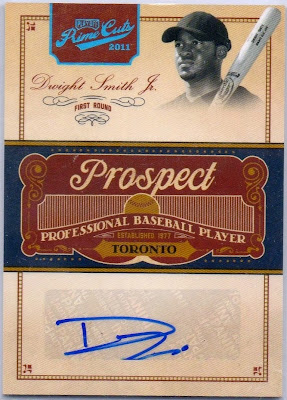 Back in 2013, I was doubtful Dwight Smith Jr would ever make the majors, but he made his debut in 2017 with a cup of coffee in Toronto, and this past season saw action in 100+ games with Baltimore. Good for him! 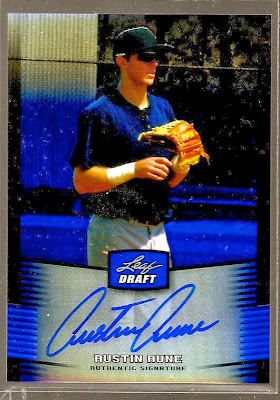 Austin Aune wasn't so lucky. The former Yankee prospect flamed out in 2017 without ever making it out of A-ball. 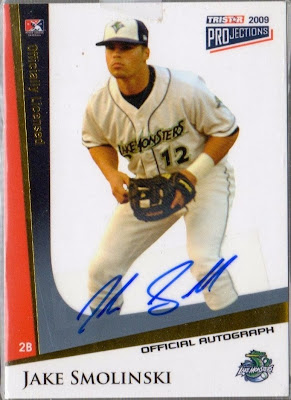 Jake Smolinski was another guy I didn't see having much future in back in 2013-- When I first started collecting 12/25 cards, I'd basically just grab anything I could find at a reasonable price.. Nowadays I'm more selective about what I go after.. There are simply too many 12/25 cards in this parallel-happy hobby these days-- but a tip of the cap to Jake; he's managed to see MLB action every year from 2014 through 2019, with the A's most recently.
Jordan Todman 2011 Panini Prime #'d 12/25 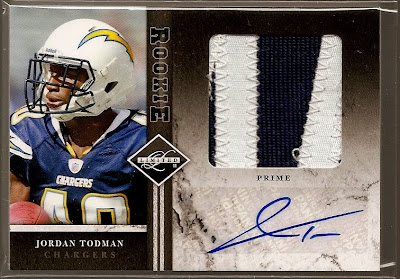 Jordan Todman seems to have been out of the NFL since 2017 without ever making much of a name for himself. At the time, this being a Chargers card was a plus for me. Now? Eh, not so much. (They're dead to me since leaving San Diego.) Nice bit of patch here, at least. 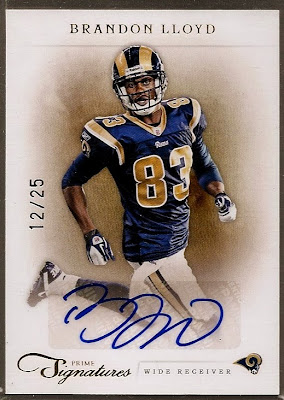 Back when I originally showed this card in 2013, I said it looked like Brandon Lloyd's career was done after not playing in 2013. But it must have been a Christmas miracle, as he came back in 2014 for a swan song season with the 49ers.

And that wraps up this look back at the inaugural batch of my Christmas Card minicollection. These 18 cards kicked off the collection nicely in 2013, and they have a place in my heart even though if I were to work up a list of my "Top 12 (or 25) xmas cards" today (possible future post idea?) only the Rickey Henderson would be a lock.

Oh, and as for "Collection Origins" in the post title (possible recurring blog series?).. I think when I returned to the hobby as an adult after stepping away in 1993, the concept of widespread serial numbering on cards was foreign to me and I wasn't sure how to process it. But seeing "12/25" always made me smile, calling to mind Christmas, holiday memories, and how special that date was to me as a kid.. waiting all year for the 25th of December to finally arrive. So I decided to start collecting cards with that "date" stamped on them. I guess it helped me get onboard with the serial-numbering craze and feel more connected to modern cards in general.

Didn't take long for me to expand into 12/24 cards as well, as that's an even more significant date for me (though parallels numbered to 24 are much less common). Not only is that my birthday, but in my household we'd typically open most of our Christmas presents that evening after a big family dinner, just saving one or two big ones (i.e. whatever Santa brought me, plus stocking stuffers) for Christmas morning. And no, I never resented my birthday being so close to Christmas. I love it, in fact! School's out.. extended family's often around.. everyone's in a festive mood.. And as someone who often gets uncomfortable being the center of attention, it's nice that the holiday helps take the focus off me. I may have been screwed out of a gift here or there due to the dreaded "combined" Bday+Xmas gift, but my mom and rest of the family are/were super cool and I was a somewhat spoiled kid, so it's not like I was ever really hurting for toys or anything.

So that's the story behind me collecting cards numbered 12/25. Thanks for reading and Happy Holidays!
Posted by defgav at 3:45 PM