another Ghost Whale reeled in (more gavins and guys from granite)

I'm at one of those points where I've got a lot of things I want to post about, but not a lot of time to take the pictures and type out the text.

But real quick, here are some year-end updates to my recent 2019 recaps of Gavins and Guys From Granite... aka my minicollections of obscure players that no one besides me really gives a crap about but oh well. LOL 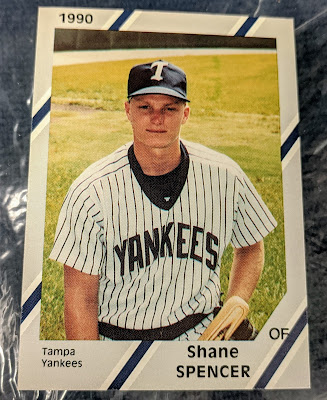 This Shane Spencer was a "ghost whale" of mine for a few years-- I saw it listed on Beckett, but I was skeptical it actually existed. According to b-r, Spencer spent 1990, his pro debut, with the GCL Yankees in Sarasota, not hitting Tampa until 1994. So I figured it was a typo or something. But nope, sure enough, the card does exist and now it's in my collection. It's Shane Spencer's first card. He's the only guy from my high school to be on a World Series Champion team. This team set, 1990 Diamond Cards Tampa Yankees, is notable in that it also includes the very first card of Mariano Rivera. But I don't have that one, just the Spencer. It was my first ever purchase from TCDB. The seller is liquidating most of his card collection due to medical reasons, so a trade wasn't really on the table. But I didn't mind throwing a few bucks his way to land this whale. I'm still not sure how Shane ended up in a set for the Tampa Yankees four years before he actually played for them, but I'm just going to go with it and not strain my noggin over it anymore. 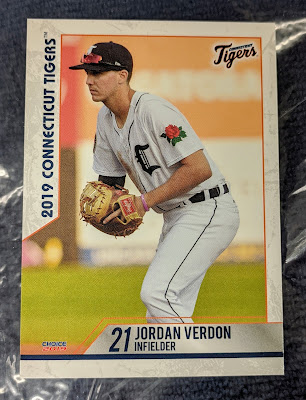 Speaking of 1st cards of guys who went to my high school, I'm happy to add the first Jordan Verdon card to my collection. Hopefully he sticks around long enough to get some more and maybe even pop up in Bowman one of these years, but he'll have to wake up his bat. I wonder what the rose on the shoulder is all about. Perhaps some sort of memorial patch. 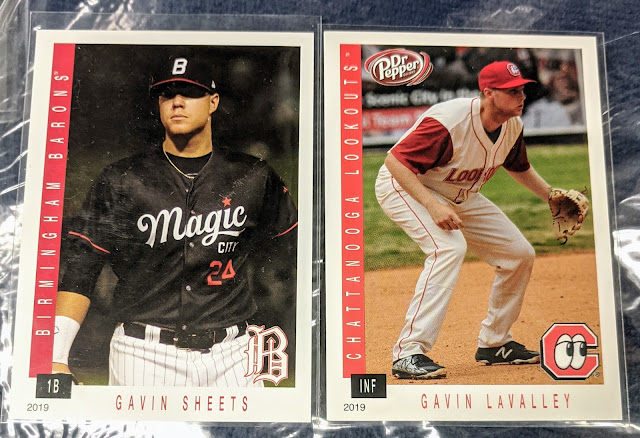 A couple more 2019 minor league cards now as we head into the Gavin-centric portion of the post. Similar design, though one is sponsored by a prune-flavored carbonated beverage. 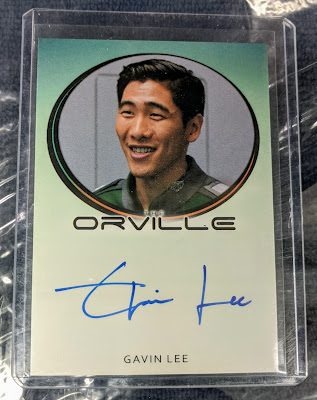 A new Gavin autograph (autoGav, if you will) for my collection. I watched the first few episodes of The Orville before kinda losing interest, though I might try catching up again in the future. Confusingly, there is a different, better known actor also named Gavin Lee known mostly for British theater. But this Gavin Lee from the Orville has also had minor guesting roles on the shows Shameless and The Rookie. I always get a kick out of seeing how other Gavins sign their name, and this one is pretty unique. 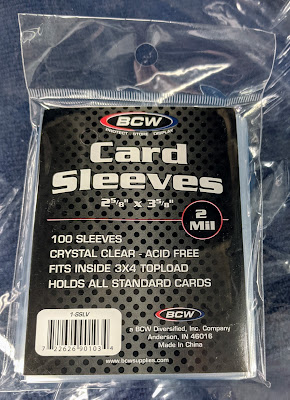 So there's a high schooler named Gavin Casas who appears in 2019 Panini Stars & Stripes baseball. Though I've had nothing but bad experiences with group break "professionals" (as opposed to group breaks run by blogger buddies which have been fine), I thought I'd give it one more shot, and snagged a slot in a full case break of the product, expecting to at least land a few base cards and hopefully a low-numbered auto or two. But I got shafted hard and came up with zero cards in the entire f'ing case. The breaker was nice enough to send me a pack of penny sleeves as a consolation. (Nice thought, though I'm an Ultra-Pro guy, not BCW, and the slight size difference will end up bugging me if I use these.)

So after flushing $9 on that ill-fated group break, I ended up spending under $5 shipped on an auction for a card where I was the lone bidder... 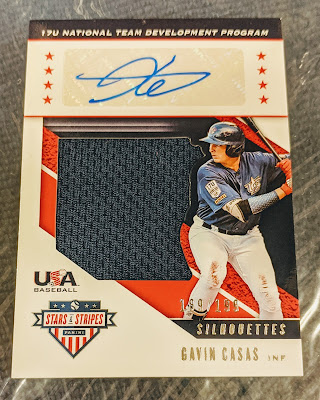 I don't plan to "PC" Mr. Casas much at this point, but I at least wanted to score one auto to add to my other autoGavs. He may still be in high school, but his signature is already looking like that of a seasoned veteran. LOL
Posted by defgav at 5:44 PM