Similar to my annual "Gavins in pro ball" post, here's another exercise for me to keep track of the lesser-known active players I collect. Time to find out how professional athletes who went to my high school did in 2019. Trenton had a solid 2019 in the Indians organization. After a couple months at A+ Lynchburg, he was promoted to AA Akron where he hit .274 with 9 homers and 22 doubles in 241 at-bats. The 24-year old mainly plays right field these days. I got a nice TTM return from him a couple years back. 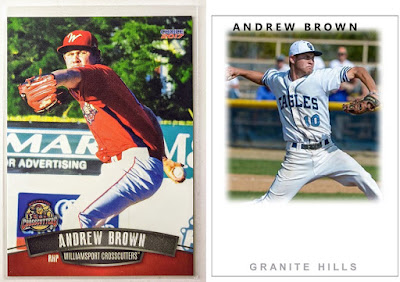 Drafted by the Phillies in the 13th round of the 2016 draft out of Granite Hills High School, Andrew performed well to start his career, but had a rough 2019, putting up an ERA of 6.17 for A+ Clearwater. He had 20 starts, plus came on in relief 4 times. I tried requesting an autograph through-the-mail with the custom on the right a couple times in the past with no luck, but maybe I'll try one more time in 2020. 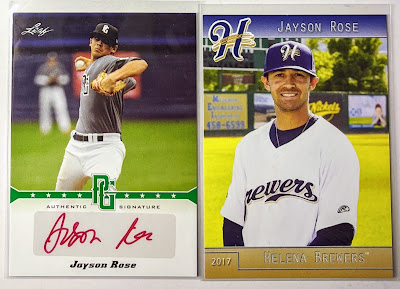 Sadly, looks like Jayson's brief career in pro ball has come to an end. An 8th round pick by the Brewers in 2017, Jayson struggled to stay healthy in 2018, was cut loose by Milwaukee in April of 2019, and didn't get picked up by another team. Bummer. All the best to Jayson in the next chapter of his life. 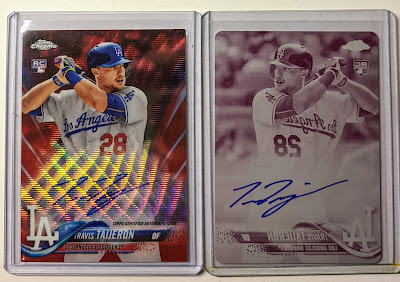 Travis is the only active Guy From Granite who's made the majors, getting into 26 games with the Mets in 2017. After spending 2018 with the Dodgers' AAA club, he returned to New York in 2019, spending the season at AAA Syracuse. His 24 dingers were one behind the team lead (Rene Rivera), and his 64 walks led the club. But his average was down (.229) and he struck out a lot (165). He's currently a free agent and will be 31 next season, so I'm not sure what 2020 has in store for him, but I wish him luck sticking around. 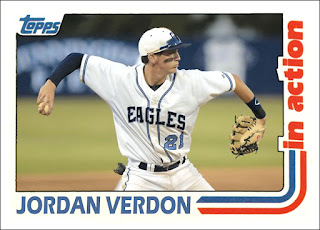 Jordan was drafted by Detroit in the 23rd round out of San Diego State University in 2018. He spent all of 2019 at A- Connecticut, playing 1B and DHing. He hit .246 with 12 doubles in 142 at-bats. I sent out a TTM autograph request with the above custom near the end of their season (my only TTM attempt to an active player in 2019), but haven't gotten a response yet. I should remember to try again early next season. I also just now bought his first real card. but I think I'll publish this post now rather than wait until it arrives.


This year broke a run from 2016-2018 of GHHS Eagles turning pro, as no alumni were drafted in the 2019 MLB June draft. But there are some talented kids coming up, so I wouldn't be surprised to see a new streak start up in 2020.

That's it for baseball. Elsewhere in sports... 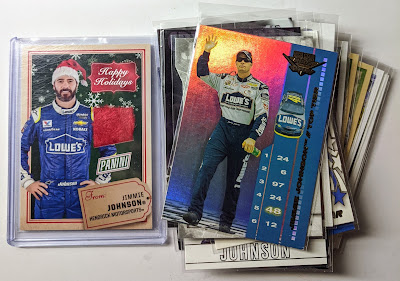 The 2019 season started on a positive note for Jimmie, as he won the 2019 Advance Auto Parts Clash in February, though that would be the highlight of the year for him. He would go on to score 4 top 10 finishes, but wound up finishing a career-worst 18th place in the final standings. The 44-year old recently announced that the 2020 Cup season will be his last as a full-time driver. A seven-time champion in the NASCAR Cup Series, he's had a hell of a career. 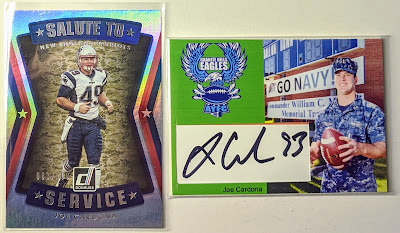 Joe plays long snapper for the Patriots (and is a U.S. Naval Reserve lieutenant in the offseason). Back in February, he brought home his 2nd Super Bowl ring as New England beat the Rams. He's played in all 12 games so far this season, with the Patriots looking to make yet another deep playoff run.


So there you have it, Granite Hills alumni doing our hometown of El Cajon proud.
Posted by defgav at 4:02 PM