I've got a handful of new Christmas Cards to feature on the blog here if I can find the time as we ramp up to 12/25.

The first one is probably the biggest of the bunch.

For someone who never really watches wrestling, I've got a respectable little collection of wrestling cards. It mostly consists of pretty ladies such as AJ Lee and Alexa Bliss (though if you want to split hairs, those are more like a subcollection of my Girlie Cards minicollection, not stored with my other wrestling cards). But I have a few cards of male wrestlers too. 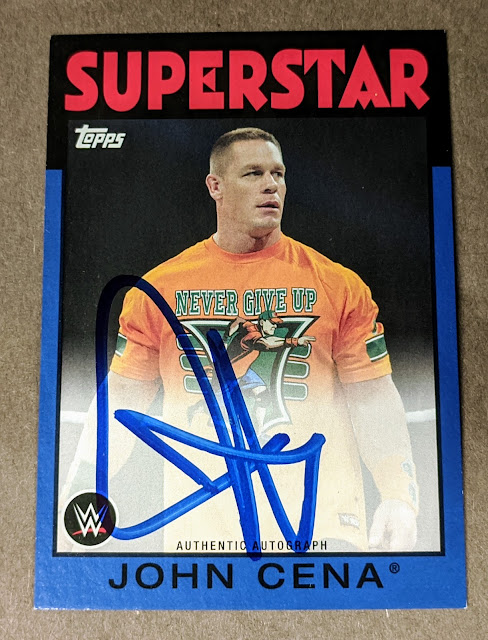 This John Cena 2016 Topps WWE Heritage autograph I recently picked up becomes my top wrestling card, at least as far as the men go.

He doesn't have the most visually pleasing signature, but at least it's big and bold (and on-card here).

My feelings towards the 1986 Topps Baseball design are a little conflicted. I've always thought it was one of the uglier flagship designs of the era, though not without its sentimental charm. For some reason, I really like modern parallels of the '86 design with colored borders, and I've got at least a couple other '86-style blue borders in my collection. The blue goes nicely with the signature, though the red from the top text and the orange and green from John's shirt clash a bit with the blue and make this card kind of ugly in an endearing way. I bet it would have looked better with "SUPERSTAR" in white.

But yeah, it looked good to me and the price was fair, so I was thinking of maybe buying it. Then when I saw the serial number on the back, I knew it was the right fit for my collection.. 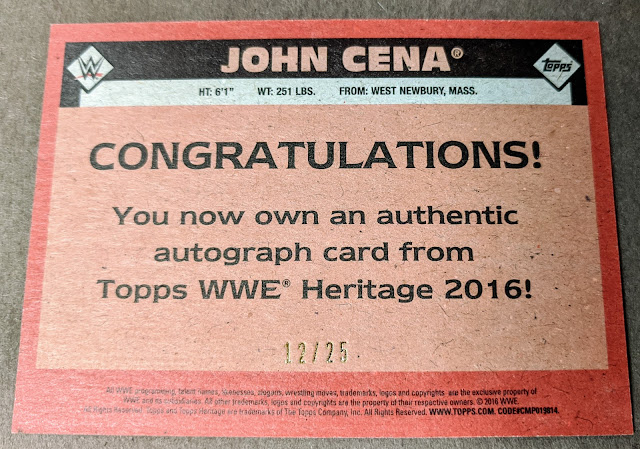 As I say, I don't really watch wrestling, but I've seen John Cena enough in movies and on talk shows that I've become a fan of his. Seems like a good dude. Smart, down to earth, good sense of humor, does a lot of great charity work (His 600+ wishes granted ranks first all-time in Make-A-Wish Foundation history).


But what really won me over was when I saw this YouTube video a couple years back of a beautiful piano recital of "Where Is My Mind?", a song by the Pixies, one of my favorite bands. Being able to play piano like that on top of everything else he does damn near makes him a renaissance man. I don't know if I'd go as far as to use the term "man crush", but I'm impressed enough to start a little PC of the guy, the first active/modern male wrestler ever added to my wantlist. This is my first card of him, so if any of you have John Cena cards for trade, I'd likely be up for them. 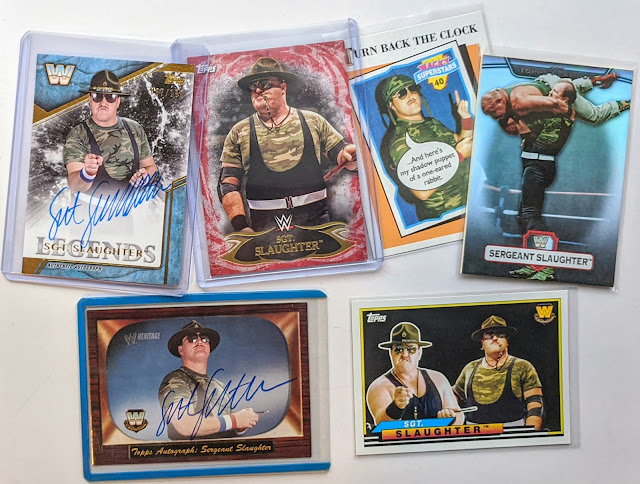 Currently the top male wrestler in my collection by quantity is Sgt. Slaughter, PC pictured above. I've been a fan of his since a kid in the 80s when I was all about G.I. Joe and he was one of the very few "real people" to get his own GI Joe action figure. I recently followed a Classic GI Joe Twitter account, and it's been a blast from the past to see pictures of those old toys and comic books. The other day I "liked" a tweet from them regarding Sgt. Slaughter and a short while later I had a nice surprise... 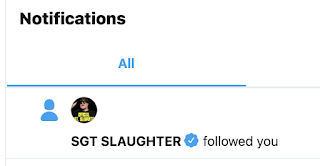 Woo! Always a thrill to be followed by a celebrity you grew up admiring (see also Bill Madlock for me). With around 6k people he's following, it's not exactly an elite group, but still very cool.

Other than what's pictured in this post, I've got 3 or 4 cards of Andre The Giant and a couple Hulk Hogan, but I think that's about the extent of my card collection of male wrestlers. I wouldn't mind adding some Roddy Piper and Randy Savage cards at some point, too.
Thanks for stopping by.
Posted by defgav at 3:25 PM