Time for my annual post checking in with ballplayers named Gavin.

We've got a new one to add to the MLB Gavins, now up to a total of 5 guys.

A relief pitcher with Colorado, Gavin Ernest Hollowell saw action in 6 games near the end of the '22 season after a strong showing in Double-A this year. He has no mainstream cards so far, only a couple minor league issues (neither of which I own, sadly), but maybe he'll get some RCs next year. A reliever on the Rockies who went 0-2 with a 7.71 ERA in his first year is unlikely to interest most collectors, but I'll have to keep an eye out to get him some representation in my collection. 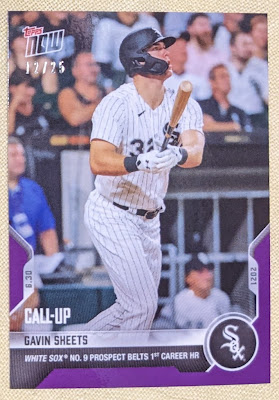 Over in the AL, Gavin Sheets was a regular on the White Sox, playing in 124 games and breaking the single season home run record by a guy named Gavin with 15. He had previously set the mark in 2021 with 11.

Gavin Lux had the best season of his young career, helping the Dodgers to another trip to the playoffs before being eliminated by San Diego. Lux still hasn't quite lived up to the 1st-rounder hype, but seems to be making strides, and tied Brandon Nimmo with 7 triples to lead the league.

Doesn't look like Gavin Cecchini played anywhere in 2022, likely signaling the end of the former first-rounder's playing career. He had been with the Angel's organization in 2021. Wishing Mr. Cecchini all the best in the next chapter of his life.

As for minor leaguers named Gavin, there are a lot these days so I'll just focus on a few familiar or notable guys.

Gavin LaValley just put together the best numbers of his pro career in 2022, however it was for the independent Sioux Falls Canaries. Perhaps his .324 batting average and 20 homers in 87 games will garner interest and get him back to affiliated ball next year. Good luck, Gavin! 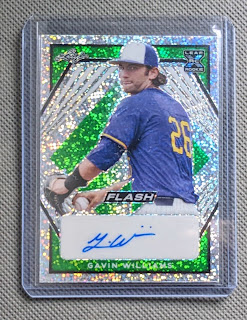 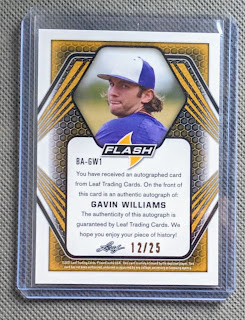 Fine young Gavins to watch include Guardians farmhand Gavin Williams. Drafted in 2021's first round, he's got lots of cards out there thanks to being included in 2021 Bowman Draft and some various Leaf and Panini products. I recently added one, above, my first new "autoGav" in a while. He's been pitching pretty well so far on the farm.

Gavin Cross was the Royal's #1 draft pick in '22 (9th overall), so I'd expect him to start getting some Bowman cards and the like soon. He already has a bunch of Team USA cards. The outfielder out of Virginia Tech has gotten his career off to a good start in the low minors. (It's still early, but Gavin Sheet's Gavin home run record may eventually be challenged.)

Grant Gavin doesn't really count, being a Grant as he is, but he's in the Padres org, so that's a plus. Mr. Gavin put up an ERA of 4.82 between AA and AAA, which is high for him. Hopefully he's able to get it together next year and get called up, but we'll see.

Gavin Heslop, a DB out of Stony Brook, got into 3 games with the Seahawks in 2021, becoming only the second guy named Gavin to play in the NFL. He was briefly with the New York Giants this year, but didn't make it into any games and is currently a free agent. Doesn't look like he has any cardboard on the market, unfortunately, with nothing found on TCDB or eBay.

And sad news to report regarding the first Gavin to ever play in the NFL. Gavin Escobar, who had recently become a firefighter after stepping away from the gridiron, tragically lost his life in a rock climbing accident on September 28, 2022. RIP, Mr. Escobar.

Here's a card that doesn't obscure his face under a helmet. In addition to sharing a first name, we both attended SDSU. Football cards don't make up much of my collection, percentage-wise, but he might be my biggest PC in that sport, or at least close to it, receiving plenty of help from blogger buddies over the past decade. He seemed like a good dude. Heartbreaking that his life was cut short.