I'm back home after a few days in Louisville for my cousin's kid's wedding. She's a friendly, outgoing young lady, so it was a big wedding with pretty much my whole family in attendance.. likely the last non-funeral where we'll ever be all together, honestly. Great seeing everybody again, including my Uncle Ed (my only blood-relative uncle) whom I hadn't seen in 20 years. I didn't really end up with much in the way of interesting photographs to share on the blog like how I did for my Chicago trip over the summer, so no "travelogue" blogpost this time.

Uncle Ed sadly lost his wife Karen last year to cancer. My Aunt Karen was pretty great lady and it's a bummer I didn't get to see her more often. My last interaction with her was mailing a little "get well soon" card/letter. I had vaguely remembered she was related to a former NFL player, and asked her about that in the letter. Here's a snippet from her reply email:

It was the 80s when my cousin Karl Swanke played with Green Bay.  I think he played about 11 years.  One of the Chicago games we went to, we got to meet Walter Payton and shake his hand.

And my nephew, one of my sisters sons, PJ Fleck, played with SF 49ers for a season, maybe 1 game and now he is head football coach at Minnesota university.  He loves it and they seem to like him too.   So yes football has always been our big interest!!! 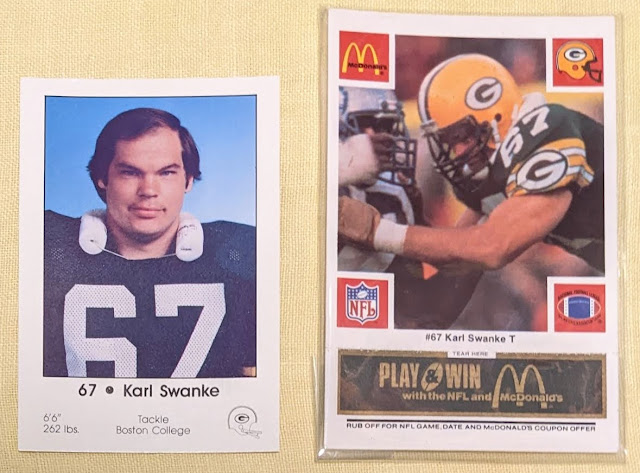 Not a lot of cards available from those guys (the legendary Walter Payton notwithstanding, of course), but Karl Swanke has a few oddballs out there, and I've now picked up a couple. 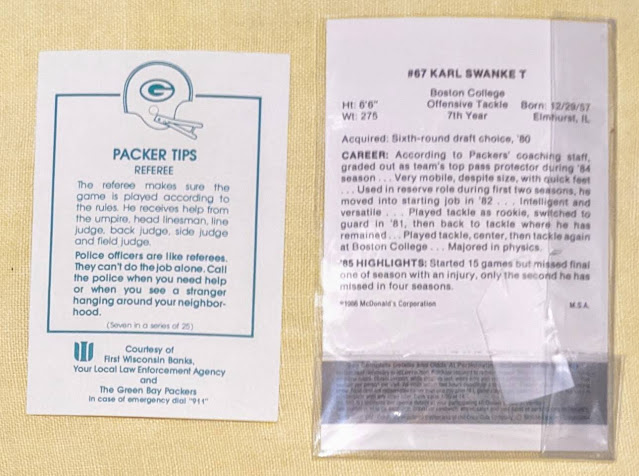 Neat to have cards of a guy I'm kinda related to in my collection now. I like when I've got a personal connection to players I collect, similar to my Guys From Granite subcollection of players who attended the same high school as me, Granite Hills. The rest of this post will look at some new additions there. 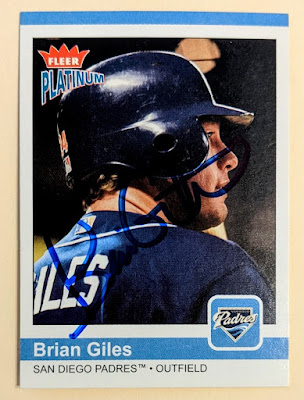 My last post mentioned there was another Padrographs PWE waiting for me at home, and here's that card, a signed Brian Giles. The signature gets a little lost in the dark uniform, but still a sweet addition to the PC. Thanks, Rod! 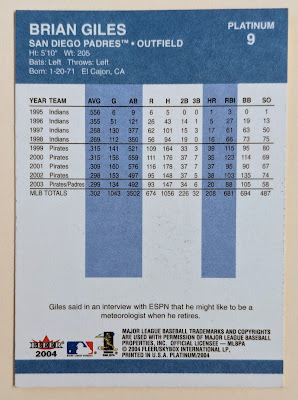 Brian had graduated a few years before I went to Granite, but during my tenure he often worked there as a security guard ("narc", we kids called them) during the minor league offseason. 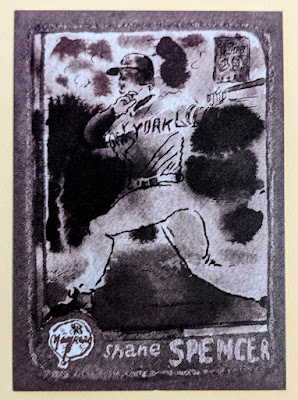 This isn't a particularly attractive card, but when it popped up, I jumped at the chance to add a unique entry to my Shane Spencer PC. Finding it on TCDB now, I'm pretty sure this is 2022 Topps Spotlight 70 II by Andy Friedman - CMYK 4-Color Test Prints Black #8 Shane Spencer SN1. 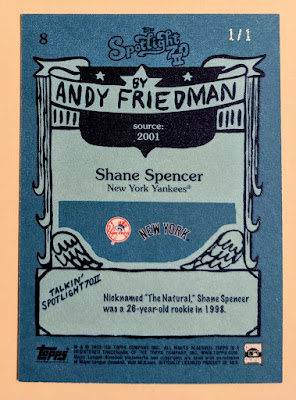 I'll have to pick up the base (in color) version of this at some point, and maybe some of the other parallels if they're cheap. I think this only got on my radar because I have a saved eBay search for Shane Spencer 1/1s because I still need the 1/1 from his 2020 Topps Archives autograph to complete that rainbow.
Shane Spencer is the only guy from my high school to win a World Series. I would have been happy with a 1998 rematch this fall, but unfortunately the Padres and Yanks couldn't grab their respective pennants. Guess I'm rooting for the Phillies. I've got decent PCs of Bryce Harper and Rhys Hoskins, so might as well root for them. 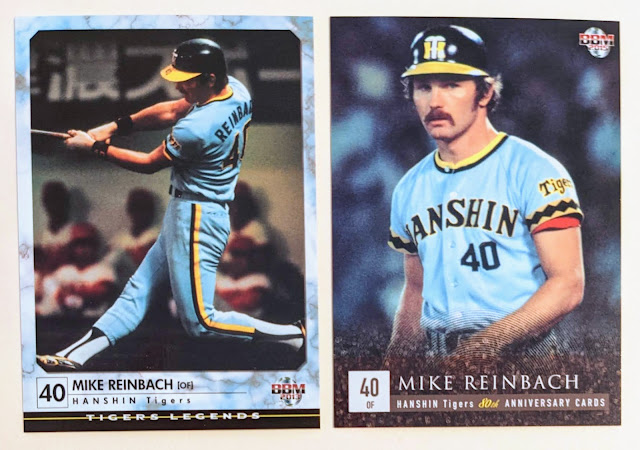 Here are a couple cards I was super stoked over. I knew Mike Reinbach had a couple modern "legend" cards from Japan, but years went by searching/waiting for them to be available to purchase from the ol' USA. They finally popped up in separate listings from the same Japanese seller at surprisingly low buy-it-now prices. I snagged them both quickly, not even bothering to combine shipping (which was also cheap). The next day I saw I had a refund from eBay and immediately thought the seller mistakenly listed them so cheap and was backing out. But thankfully, no, they were just kindly partially refunding me a little bit in regards to combined shipping. Very nice of them!
To refresh your memory, Mike Reinbach was the very first guy from my high school to break into the majors, getting a cup of coffee with Baltimore in 1974 before heading overseas for a successful stint with the Hanshin Tigers. His retirement was cut short by a fatal car accident just shy of his 40th birthday. 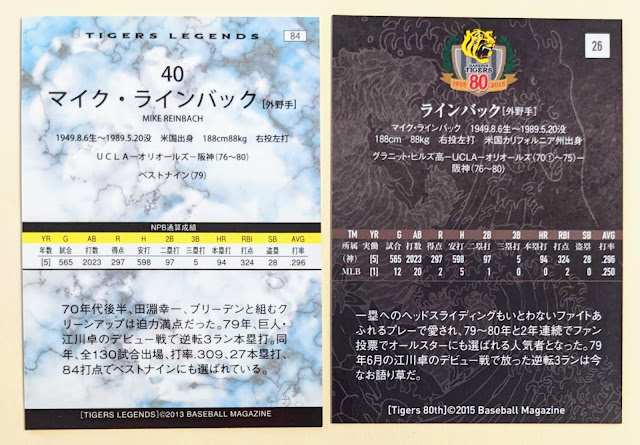 Other than an "All-Time Orioles" oddball from 1991, these are Reinbach's only post-career cards on the market, the left card from 2013 and the other from 2015. I love how the '15 back includes his career stat lines for both Japan and MLB.

Still a ton of his Calbee playing-days cards left for me to track down, but checking these two modern cards off the list feels great.

Now let's change gears and check in with the guys from my high school who are currently active in the minors...

Trenton Brooks had a solid year with the Guardians' AAA team. Here's hoping the 27-year old can crack the bigs next year.

Andrew Brown, a pitcher in the Phillies org, lost his entire 2022 season to injury. Bummer. Hope he comes back strong in '23.

Dillan Shrum is a slugging first-baseman who knocked 16 taters for the Royals' high-A team. Best of luck to him progressing up the chain.

Honorable mention: Sean Ross, who got cards in 2016 Leaf Perfect Game (see my 2018 update), is still an active amateur, which kinda surprised me. Put up good numbers at Indiana State and in collegiate summer league this year. Would be cool if he went pro next year, but we'll see.

Ok, that'll do it for this post. Thanks for reading!