I'm getting a kick out of completing these old sets I "started collecting" as a kid. The first was 1973 Topps (my first real vintage card as a kid was a '73 Pete Rose I traded a Super Mario Bros. 3 NES cartridge for), more recently was 1980 Topps (the earliest cards I owned as a tyke were a few random '80 Topps A's my friend scribbled his name on the backs of). And now 1982 Topps gets wrapped up. It's the earliest set I ever bought a bunch of packs from. (Sorry to my grammatically-sensitive readers for ending so many sentences with prepositions.) I amassed probably around 60-70% of the set in my younger days, but that project went out the window when I left the hobby, to be boxed up and stored in the garage for 15 years before eventually jettisoning the gist of them when I moved out of state.

I only held onto a few of my favorites from my original card collection. But now with my newfound love of set-collecting over the past 3 or 4 years, I figured I'd take care of some unfinished business and knock out 1982 Topps once and for all. In my last post, I mentioned a generous mailing from Fuji took me to within a George Brett base card of completing the set. Then I took a look in my Brett PC, and sure enough, near the bottom of the stack was card #200... 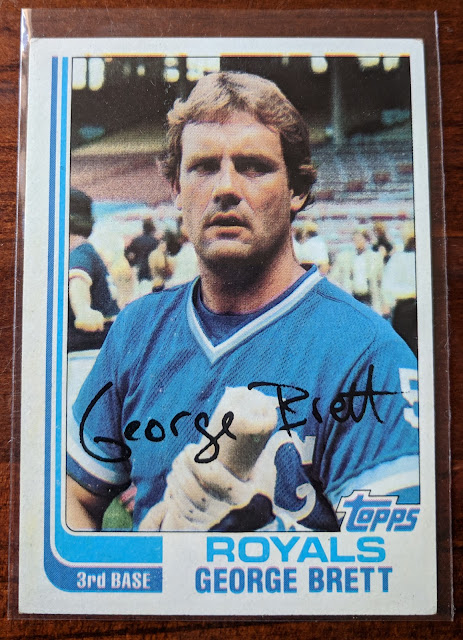 I don't think this card was from my childhood collection (though I recall having his All-Star and In Action cards from the set). Honestly, I can't remember the source, despite searching my blog's archives for an answer. Probably either a trade from a few years ago or perhaps a cheap card show pickup.

Regardless, great to finally have all 792 cards checked off. Some are very familiar to me, and others I had never seen before. This is the first set I've ever completed using the help of cards from my original collection (most notably the Ripken rookie; the greatest pull of my childhood), so it truly feels like a finished project over 25 years in the making. Otherwise, the set was entirely built by trades this year (and perhaps one or two card show PC pickups from before I decided to go for the set.)

My blog has probably featured enough 1982 Topps over the past few months, so I don't think I'll pick out my favorites to feature today, but maybe I'll revisit the set in a future post, pointing out all the interview photos, the classic Fisk In Action card, and other things I might find interesting. 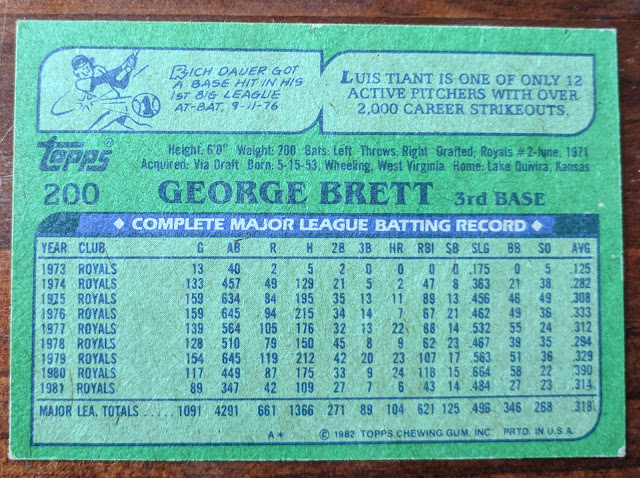 But I'll at least show off the back of the Brett. I like the 1982 backs for sentimental reasons, but otherwise they're not great. The green overload is too dark and often hard to read. I like that there are cartoons, but they're pretty small, and I much prefer the "Did you know?" trivia to be regarding the guy on the card, not random baseball tidbits. 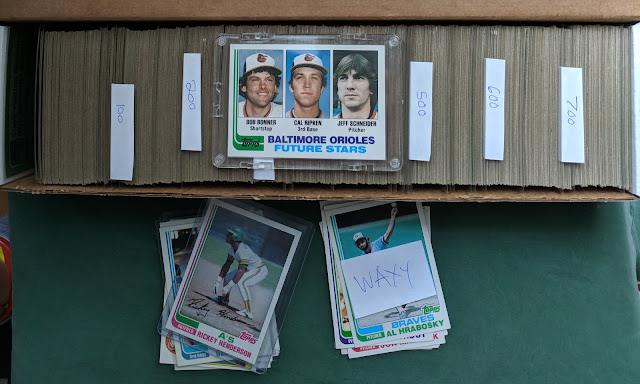 So here we go, just about ready to be put to bed. I've still got about a dozen cards with wax on the fronts that I need to take a blowdryer to and wipe off (I already cleaned off a few the other day, but you can only do so much until your fingers start to burn!). And I still have 4 cards I want to upgrade before I can truly feel like I'm 100% done with the set. I'm not worrying about the little sticker inserts, errors, or the "blackless" printing variations. I would like to add the 1982 Topps Traded set as a complement someday, but no rush on that.

Big thanks to everyone who's helped me piece together this set over the past few months, with special shoutouts to Turrdog, Larry P., Mark Hoyle, TSHenson, and of course Fuji for pushing me to the finish line.
Posted by defgav at 3:06 PM