Here's an "extra credit" addition to my already-completed 2016 Cryptozoic Ghostbusters autograph set. One of the names sadly missing on the auto checklist was Frank Welker, who was the voice of both Slimer and Ray on the Real Ghostbusters cartoon. 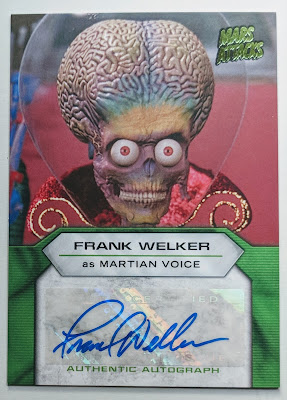 I recently scored this certified auto from a Mars Attacks set. Welker has an incredible résumé and looking over his Wikipedia page, I'm amazed how he was a voice (or few) in basically every 80s cartoon I loved as a kid: G.I. Joe, Transformers, DuckTales, Inspector Gadget, Super Friends, and The Smurfs, to name a few. He was also Santa's Little Helper (and other animals) on the Simpsons from 1991 to 2002. His longest-running role is Fred in Scooby-Doo, which was his first acting gig way back in 1969. He's also been the voice of Garfield in some recent animated movies, which is kinda funny because Garfield's original voice was portrayed by the late Lorenzo Music who played Peter Venkman on the first couple seasons of the Real Ghostbusters.

And of course Ghostbusters is what I'm most interested in at the moment, so I whipped up a custom overlay for the Mars Attacks card. A difficulty was presented by the fact that all the Cryptozoic Ghostbusters autos are horizontal. So if I wanted to make a custom that would aesthetically fit in with those, it would take some additional design work on my part. I didn't want to just turn the real card into a "cut signature" since I'd hate to destroy the original. So I had to get a little creative... 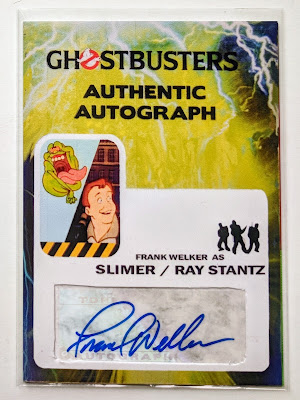 It turned out pretty decent! Not perfect, but good enough for my collection. (I'd love to find some kind of diecutting device so I could make better window cutouts. I bet if I went to a big crafting store they could help me out with something.) But yeah, happy to now (kinda) have a certified Slimer auto! And good ol' Ray too, of course. As with all my overlays, the original card remains unaltered, just with a custom resting on top of it in the penny sleeve. 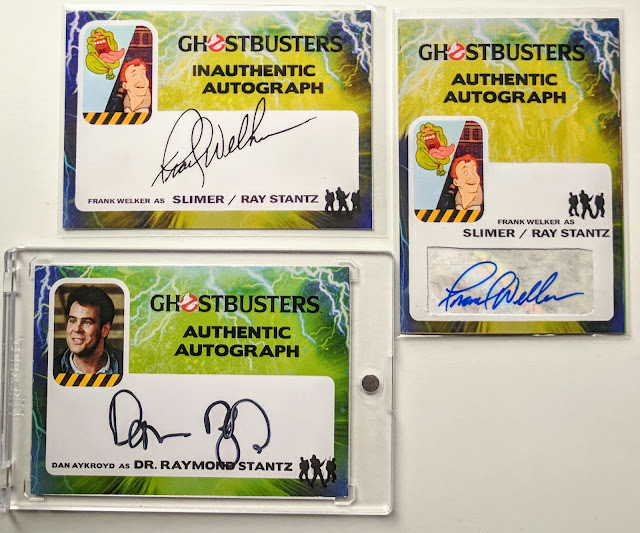 For comparison, here's the clearly INAUTHENTIC custom auto I made a few months ago, along with an actual Ray auto from the set.


Anyways, glad I could shoehorn a certified Frank Welker autograph into my Ghostbusters set, joining Lorenzo Music as someone I added thanks to a custom overlay. I hope to eventually add signatures of other Ghostbusters folks who didn't get real autos in the set. In fact, I just snagged another one on COMC as I finished typing up this post, so expect me to work some magic on that once I eventually pull the trigger on my next shipment.
Posted by defgav at 4:01 PM