New gifs and my 1st in-person auto of the year

Didn't have a chance to put together much of a post today, so let's recap the few animated gif cards I've whipped up over the past week or so.

(Here's an alternate version. I like this clip better, though it doesn't really work because he's a Blue Jay there, but it's a Brewers card.)

8/23:
Happy Birthday to the ageless Julio Franco, who turns 60 today. Oldest player to ever hit a major league home run (48). Played pro ball well into his 50s. An inspiration to us old guys everywhere!


This next one coming up isn't a gif but instead a sketchcard I made the other day, and I'm including it here as it falls under the umbrella of "creative output" so close enough... 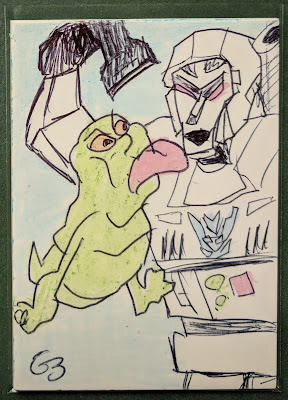 If you told me as a kid in the 80s that Slimer and Megatron were (voiced by) the same guy, my little brain would have probably exploded. Using my limited artistic abilities, I made a sketchcard to help process my feelings here in 2018. #Ghostbusters #Transformers

8/31:
Wishing a Happy Birthday to the great Frank Robinson! The 14-time All-Star turns 83 today. Lots of highlights in his HOF career, but hard to top 1966 when he won the triple crown and was AL MVP and World Series MVP with the Orioles.

So there ya go! As you can see, I'm trying to get a little fancy with these, often using real pictures of cards to help bring them to life, as opposed to like the Yaz at the top which is all Photoshop. As always, happy to hear any feedback you've got for me.

I took the day off work Thursday, and you'd think with all that downtime that I would have been able to get around to documenting the cards I received recently from Chris and Doug, sitting atop my blogging to-do list. Plus then I also received nice packages from Night Owl and Julie. But no, I kept busy with other projects and didn't even get a post out Thursday. But catching up on trades will be a priority for me this holiday weekend.

Thursday evening, my wife and I went to a stand-up comedy show, sort of celebrating 11 years as a couple. 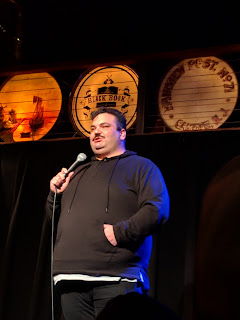 The first comedian and host of the show was Ian Karmel. We've seen him at least a couple times before. Funny guy. (Here's a link to a YouTube search in case you wanna get some chuckles.) 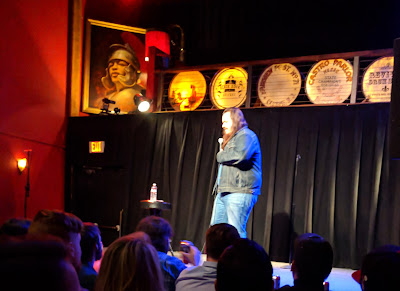 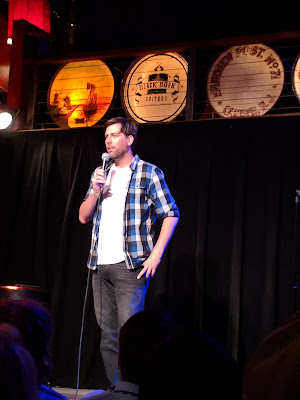 Then the headliner was Sean Jordan (YouTube search). I think he's well known in comedy podcast circles. Hilarious set. He was being recorded for a comedy album he's putting out. There was actually an early show and late show, with us attending the first one. I assume the album will end up being a composite from both sets.

So that was pretty cool. As the show ended and people started filing out, Sean made his way over to the exit to thank everybody for coming to the show as they left. Class act! I hadn't planned on getting an autograph, but with the opportunity falling in my lap, I pulled out the trusty Sharpie that I usually keep on my person whenever I leave the house (comes in handy at work, so I've just gotten into the habit of always having it), and Sean was gracious enough to sign my ticket printout.

The inscription says "Get Buck!", one of his catchphrases.

It's a bummer the days of ticket stubs as keepsakes are dwindling as everything moves to digital. I've gotten a few stubs signed in the past, but I think this is my first signed ticket printout. Probably not a frame-worthy item, but it'll be a cherished part of my collection. Thanks again, Sean!

I believe this is the first in-person autograph I've gotten in 2018, and will likely stand as the last. Hey, I'm definitely no Zippy Zappy. 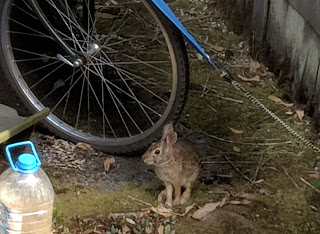 But one thing Zippy and I have in common is our love of bunnies. Saw this cutie nibbling on weeds in my backyard yesterday and snapped a photo from my kitchen window.

Have a great holiday weekend, everybody!
Posted by defgav at 3:44 PM